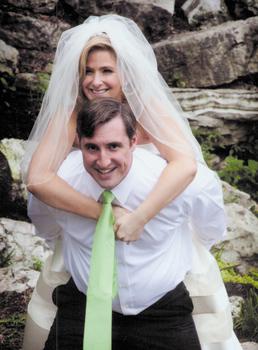 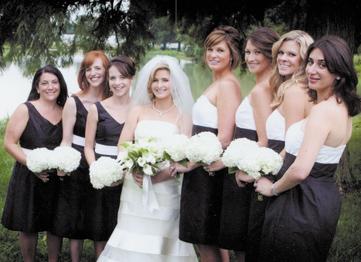 Tracy Goldberg Gross with her bridesmaids 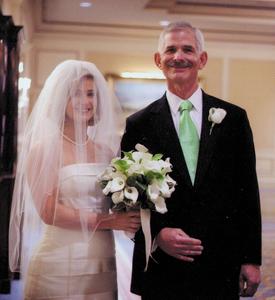 The bride with her dad, Ed Goldberg 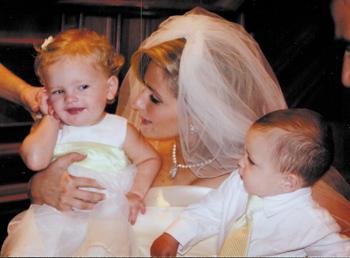 Once Matt Gross decided he was going to marry Tracy Goldberg, there were only four things standing in his way: Illinois, Kentucky, Tennessee and Georgia.

“Tracy was in town from Tampa for her brother’s 30th birthday party, and that’s where Matt met her for the first time,” explains Tracy’s mom, Dorette Goldberg. “Matt declared to someone at the party, I’m going to marry her.” She adds that even after he was told Tracy lived in Florida, it didn’t matter. “He asked her out, they had a long-distance relationship for eight or nine months, and it turned out just the way he said it would.”

Matt proposed to Tracy in November 2008, and the couple married on September 6, 2009. Even though she had less than one year to plan her only daughter’s wedding, Goldberg says everything came together beautifully, even with travel to the East Coast and Chicago to find Tracy’s Vera Wang bridal gown.

“Tracy went to Boston with some friends who were also engaged, and the girls went shopping for gowns together. She found exactly what she wanted, but she wouldn’t buy it until I had seen it, too,” says Goldberg. “It wasn’t available in St. Louis, so after she came home, the two of us went to Chicago, looked at the dress and ordered it. It was just as beautiful as Tracy described it—the perfect dress for her!”

The bride chose black and white gowns in different styles for her bridesmaids, letting them choose the look they preferred, notes Goldberg. “You know, everybody has a different shape, and the same dress doesn’t always look good on everyone.” Instead of renting tuxedos, she adds,  the gentlemen in the wedding wore their own, along with shirts and ties that were gifts from the bride and groom.

All of the wedding flowers came from Ken Meisner, Goldberg notes. “He’s like a member of the family—we wouldn’t have considered using anyone else. He remembered that Tracy’s grandmother loved bird of paradise, and that’s what Tracy chose for the table centerpieces. And the white hydrangea bouquets were just beautiful with the bridesmaids’ gowns.”

Tracy and Matt chose The Ritz-Carlton for their ceremony and reception. “They talked about a destination wedding, but the logistics were just too difficult,” Goldberg explains. “For one thing, Tracy’s great-uncle lives in Germany and he was 96 years old at the time. He’s like a grandfather to our children, and he’s never missed a single family event while they were growing up. So of course we knew he would want to be here, and having the wedding in St. Louis was just easier for him. He walked in the processional and loved every minute!” Five other family members traveled from Germany for the wedding, she adds, as well as two guests from Sweden.

Goldberg credits her ‘amazing’ wedding planner, Simcha Lourie, with managing the plans successfully. “She was just wonderful! I resisted the idea in the beginning, because I was so sure I could do it all myself. But we had so much going on during that time—we had moved twice and also had a new grandchild,” she explains. “Simcha just took over, thinking of things that would have never occurred to me. She promised me I would not have to worry about a thing, and she was right. I just relaxed and enjoyed the big day.”

Tracy Goldberg Gross with her bridesmaids

The bride with her dad, Ed Goldberg