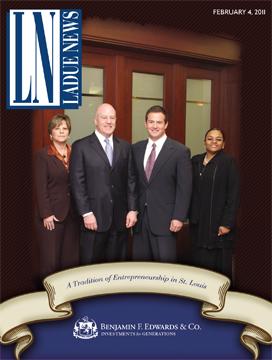 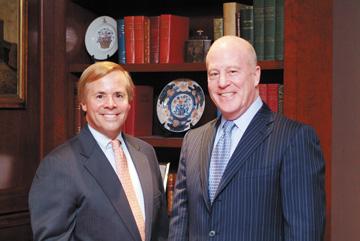 Although he grew up listening and learning as his father led the fifth generation of the family business, Tad Edwards says his earliest memories of Benjamin F. Edwards III, the former chairman of A.G. Edwards, did not focus on discussions of equity investments. The conversations were always about people and how to treat them.

“When we were kids and our family was on vacation, my dad would never call the office to check up on people, because he trusted them to do their jobs,” Edwards says. He always said, If they make a mistake, they’ll learn from it and become stronger leaders. That culture of trust and integrity was integral to his business philosophy.”

Since its debut in 2008, the company has experienced exponential growth. “We started with three people in my home,” Edwards says. “And now we’re up to 142 people, with 15 offices in nine states. We’re very grateful, very humble, and we like the pace we’re on.”

His grandfather, Presley Edwards, taught him what to look for when hiring, Edwards says. “You want three qualities, in this order: People with integrity first, character second and talent third. We hire honest, gifted team players who want to have fun at their job.”

The firm’s first St. Louis branch office, opened in Clayton last September, is managed by Blake Dunlop, who also serves as regional manager and a member of the board of directors. Dunlop brings almost three decades of financial expertise to his new role, as well as some St. Louis sports history: He played for the St. Louis Blues in the early ‘80s.

Describing his decision to join the company, Dunlop says he welcomed the opportunity to work with people he knew. “I was with A.G. Edwards for my entire career, so I knew Tad and many of the principals at the new firm,” he explains. “Having being involved with Ben Edwards and his family, knowing what they stood for, and how that translated into the work environment, this was a chance to create that client-first culture in a new and growing firm that’s doing very well.” In a nod to yet another family tradition, Dunlop is joined at the new branch by his son Connor, a financial consultant who returned to St. Louis from San Diego to work with his dad at the new branch. “It wasn’t easy to get him to leave San Diego!” Dunlop notes. His long-time associate, Christine Boxdorfer, has also joined him at the Clayton branch.

As the sixth generation launches a new venture, a seventh generation eagerly anticipates his own future. “Our son, Benjamin F. Edwards V, is 13 years old,” Tad Edwards says. “He already knows what he wants to do! He wants to go to Princeton and then come to work for the firm.”

The values so integral to the new company are expressed in the company logo, the Edwards family crest. The mission statement describes a firm grounded on trust, integrity and mutual respect.

“My dad incorporated those values into his own mission statement,” Edwards says. “I thought perhaps I learned them at the breakfast table, but probably not. My dad never ate breakfast because he was so anxious to get to work!” LN