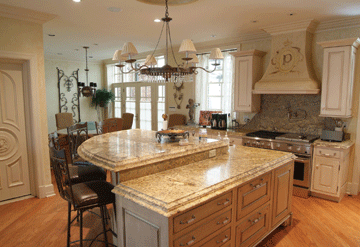 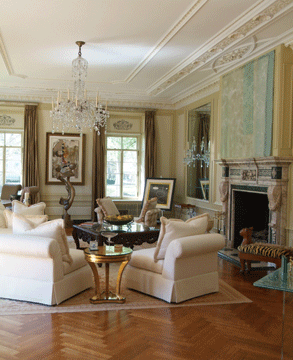 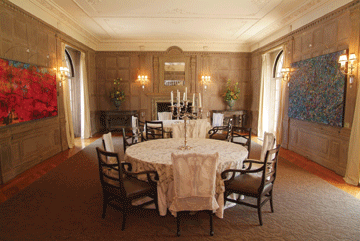 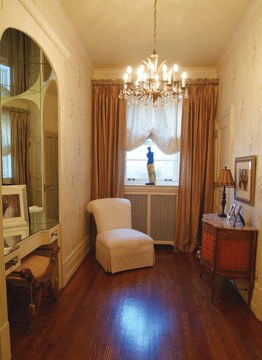 An arched vanity is the highlight of the first-floor powder room. 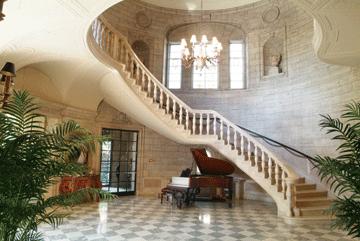 A winding staircase leads past Tiffany stained glass in the marble and stone rotunda.

Often referred to as ‘the Astor of St. Louis’ in the late 19th century, he was one of the founders of the St. Louis Union Trust Company, served as director of the Saint Louis Art Museum, and was president of Caitlin Tobacco Company when St. Louis was the world’s largest tobacco manufacturer.

Daniel Caitlin’s biography in the old St. Louis Star-Times describes him as possessing ‘a magnificent private fortune and refined tastes,’ and both are clearly evident in the superb home he built on a private street in the Central West End. The simply worded building permit, issued Aug. 30, 1915, for ‘a two-story brick dwelling,’ gives no indication of the Renaissance splendor that would be created under the guidance of famed architect James P. Jamieson. However, the building costs—$74,000 or about $1.3 million in today’s dollars—were a good clue that this would be no ordinary home.  Sadly, Caitlin never had the opportunity to live there; he died at his summer home in New Hampshire just a few months before his new house was completed.

Since Caitlin’s widow Justina sold the property in 1945, it has been home to just eight families,  including former St. Louis mayor Alfonso Cervantes and his wife Carmen. A 1969 interview with Mrs. Cervantes mentioned ‘titled royalty’ being entertained in the house, and neighborhood lore claims party guests in the 1960s included the Rat Pack.

The home’s current owners have continued the entertainment tradition.“This is a wonderful house for a party!” says Robin Porta. “When the winter walls are up on the patio, we have football parties, and when the walls come down, the pool opens up.”  The winter walls—constructed of heavy clear vinyl—surround the expansive patio, creating a lofty two-story space complete with outdoor fireplace and flat-screen TV.

On a street where spectacular is the norm, the Porta home is distinguished for its unique L-shaped layout, but it’s the breathtaking rotunda foyer and Palladian-arched second-floor loggia that make it so unforgettable. Thoughtfully planned to take advantage of natural light, the rotunda is especially stunning when light filters through the original Tiffany stained glass windows, crafted with the initials of Daniel and Justina Caitlin.

When they crossed the threshold for the first time, the Portas couldn’t resist. “We were living in the county when this house came on the market,” Porta explains. “And I didn’t think I wanted to move back to the city. Then we walked in the front door, looked at one another and said, ‘We can do this.’ And we did!”

Work on the house began immediately, Porta says. “I don’t think there’s anything we haven’t redone. The new kitchen was particularly challenging because the floors are solid concrete and we had to bring in a special core drill.” The kitchen counters were still plywood when the couple and their two daughters moved in four months later and—of course—threw  a party. “The best party, though, was definitely our younger daughter’s wedding reception last summer,” Porta says. “Tony Montano did the lighting and the flowers. It was gorgeous!”

Perhaps that calls for another party? LN

An arched vanity is the highlight of the first-floor powder room.

A winding staircase leads past Tiffany stained glass in the marble and stone rotunda.