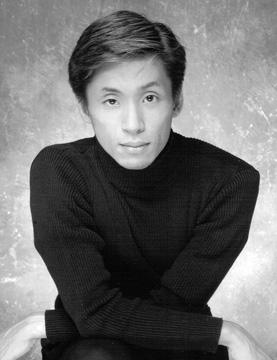 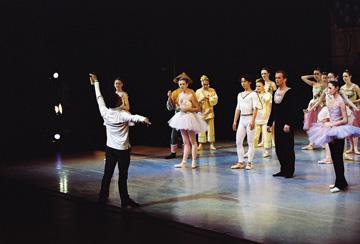 Among the most prestigious dance competitions in the world, the Prix de Lausanne in Switzerland attracts hopeful young dancers from around the globe. In 1980, Gen Horiuchi won the gold medal for choreography in Lausanne and was awarded a scholarship to the School of American Ballet. Two years later, famed choreographer George Balanchine invited him to join the New York City Ballet, where he was a principal dancer for 15 years. As a choreographer, Horiuchi thrilled an international audience with his choreography of the opening ceremony at the Winter Olympics in Nagano, Japan.

Fortunately for the Saint Louis Ballet, Horiuchi visited our city in 1996 at the request of a colleague, who happened to be the father of Ludmilia Davidovsky, artistic director of Saint Louis Ballet. “At that time I was invited to join the company as a guest dancer,” he says. “And then, in 1999, after Ludmilia passed away, the board of directors asked me to take over as artistic director.”

By the time Horiuchi took the reins in 2000, the ballet company and the school were struggling. “There had been more than 100 students and 15 or 16 paid dancers, but by the time I arrived, almost everyone had left,” he explains. “It was challenging, because no one knew who I was, and they did not take me seriously. I began with just 40 students in the school, and only seven company members were willing to stay and work with me.” The performance schedule, as well as the venue, were also problematic. “Our only series was The Nucracker, and we were performing at the old Westport Playhouse. It was like a small convention center—it only seated about 200 people, and had no sets or extravagant drops or scenery.”

One of Horiuchi’s earliest decisions was to completely separate the ballet company from the school, and relocate the school to a new studio in Chesterfield. “I had a clear vision—I still do—that the school should focus on classical ballet instruction, and not just dance in general. There are many schools in St. Louis that offer everything from jazz to tap. I specifically wanted to emphasize classical ballet.”

Traditional discipline is apparent in every class. “In any classical education—piano or violin lessons, for example—everything is about discipline. We have a very strict dress code: no T-shirts, no leg warmers in class. The young ladies must wear their hair in a ‘ballerina bun.’ I believe that’s what was missing in the St. Louis ballet scene. Everybody just wanted to enjoy dancing, and that’s the ultimate goal, of course. But in the process we needed to introduce discipline.” Some observers don’t always agree, Horiuchi admits. “I still have people come in and say This is too strict. But I still believe the discipline is important because it allows you to grow as a dancer.”

Horiuchi’s instincts have proven correct. Under his leadership, the ballet school has grown from an enrollment of just 40 students to 300. And the company can now delight much larger audiences at the Touhill Center. “I pretty much built the company from scratch,” he says. “It’s been an adventure.”

St. Louis ballet fans have much to look forward to in the coming months. In addition to Tribute to New York, opening next weekend, Horiuchi is reviving his work featuring the music of renewed French jazz musician Claude Bolling. That performance will be at The Touhill in April, followed by the timeless music of Sergei Prokofiev and Romeo and Juliet in June.   LN