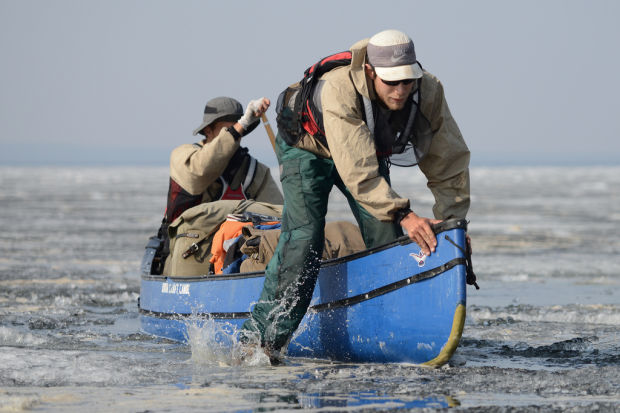 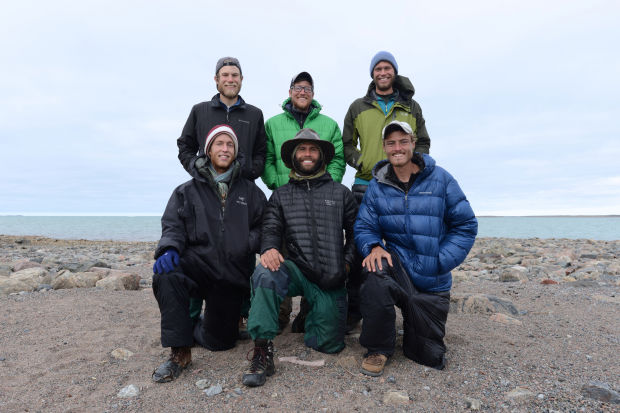 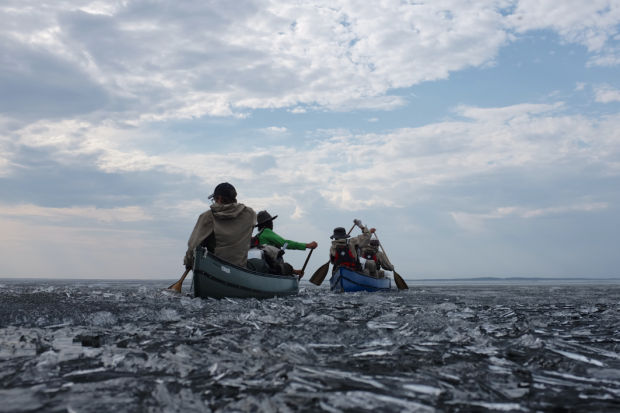 St. Louis natives Cordeal, Hubb and Woods attended Rossman School together, and met the other three as campers at Camp Kooch-i-ching in International Falls, Minnesota. Combined, the men have spent more than 70 summers at Kooch-i-ching, as both campers and counselors.

Kooch-i-ching director JR Verkamp had all six men as campers back when he was a counselor himself. Each summer, he watches as new, unsure, nervous campers grow into confident young men. Though this expedition was the sixth trip to the Arctic done by Kooch-i-ching alumni, the Tri-Province trip was the first sponsored by the Camping and Education Foundation, the parent company of Camp Kooch-i-ching.

The crew assembled at Kooch-i-ching before departure to prepare, reviewing emergency procedures, creating contingency routes, going over maps and packing. Two weeks later, armed with three sets of equipment and enough food to last 70 days, the men set out on what was sure to be a grand adventure.

Along the way, the group collected water samples for isotope testing at the International Arctic Research Center at the University of Alaska, Fairbanks. The samples are being used to create isoscapes, which can help trace humans, migratory animals and terrorist activities. Woods, who works as a photojournalist, shot photos of the trip for National Geographic.

On a typical day—though days differed drastically, depending on terrain and location—the men woke between 5 and 6 a.m. They got on the water an hour later after taking down the tents, packing and eating breakfast—usually hot cereal. The group would paddle until 1 p.m. before stopping for an hour for lunch. They’d continue on in the afternoon, and set up camp by 8 p.m.

“We’d have dinner and go to bed pretty much after that,” Woods says. “We went to bed pretty early. Having that hour in the tent at night was nice. You were exhausted, but it was nice to be able to read, write in your journal or talk to whomever you shared a tent with that night.”

Woods says the men consumed about 3,000 calories a day, but he estimates they burned at least twice that: each lost between 20 and 30 pounds during the course of the trip. For lunch, they ate meat and cheese on tortillas or hardtack, or peanut butter and jelly, which was “everyone’s favorite by the end of the trip, because it was most filling,” Woods says. In the evenings they often ate freeze-dried, pre-prepared meals, supplemented with dried meats, quinoa or fresh fish they caught. Still, hunger always loomed.

“You have to make a very conscious effort to not think about food when you’re paddling,” Woods says. “Any of the meals—if I ate them now—would be perfectly satisfying and filling, but our bodies just wanted so much more. I stopped dreaming about anything but food…I couldn’t sleep some nights because I was thinking about food so much.”

Travel depended on the condition of the rivers and lakes: They paddled upstream against the current in flowing rivers, dragged or carried canoes over frozen lakes, and waded for miles in freezing-cold waters too shallow to canoe. Every 10 days, the trekkers used a satellite phone to call a friend back home, who would then send an e-mail to friends and family, letting them know of the group’s progress. Physical exhaustion, uncertain terrain and hunger led to “potential for people to get snippy or disrespectful with another,” says Cordeal. “But we did a great job of being mindful of where we were and who we were with. We were patient with each other and communicated, and we succeeded in the teamwork aspect.”

Fifty-seven days after setting out, the men reached the Arctic Ocean—and the end of their endeavor. “There was always a chance that we wouldn’t [make it],” Woods says. “That was a sense of accomplishment I had never felt before.”

Both Cordeal and Woods agree that Camp Kooch-i-ching gave the men the skills, knowledge and attributes to complete the trip. “This group of six individuals were really the definition of what Kooch-i-ching is about,” says Verkamp. “All six are extremely different in regards to types of ability and personalities. Because they grew up at camp year after year, they were able to go 60 days together for 1,000 miles, sharing food and the workload. There aren’t too many groups of six individuals who could do that.”