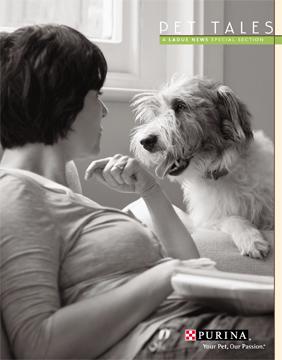 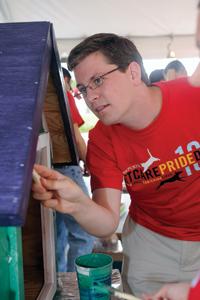 Rescue dogs at the Animal Protective Association of St. Louis (APA) will soon have a new dog park to romp in while they wait for a new human, thanks to the superhuman effort of employees from Nestlé Purina PetCare Company. “Our team shoveled 35 tons of rock in just over an hour,” says Betsy Cohen, vice president of sustainability for the company. “That’s over 1,000 pounds of rock a minute! They created a wonderful space for the dogs, the staff and volunteers.”

The project was one of several on PetCare Pride Day in June, an annual community service event sponsored by Nestlé Purina, she explains. “Every year hundreds of our employees volunteer their time for this event. In addition to building the dog park, they also worked at the new Stray Rescue shelter, landscaping the grounds, constructing dog houses and making blankets for the animals.”

Cohen says the focus on pets and community service is a large part of why employees are so enthusiastic about the company, adding, “We call it ‘creating shared value.’ Being involved with the community reflects positively on our business. Our associates are enthusiastic, and that inspires others to want to join us.” In 2001, she adds, PetCare Pride Day will celebrate 10 years of volunteer service in the St. Louis area.

Cohen also serves as vice president of the St. Louis PetLover Coalition, an umbrella organization formed by Nestlé Purina in 2009 to support local animal welfare groups in their mission to improve the lives of dogs and cats in the St. Louis community. “Coalition members include 17 independent organizations—large and small, public and private—from the city and county. The idea began when the St. Louis City Department of Health, which oversees the animal shelter at Gasconade, Mo., asked Purina to help establish collaboration between animal welfare groups so they could save more of the publicly served animals,” says Cohen.

The coalition has three long-term goals, she explains. “We want to lower the number of unwanted animals coming into the community so we can reduce euthanasia, and that requires education and the availability of low-cost spaying/neutering. Our second goal is to increase pet adoption 20 percent over the next five years in the St. Louis area, and we’re doing three group adoption events this year to help us reach that goal. All of our coalition groups attend and, of course, there are animals available for adoption, as well as information about spaying/neutering and responsible pet ownership.” The coalition held an adoption event in June at Plaza Frontenac, Cohen reports. A second one is planned for fall at the Science Center, and the final 2010 adoption event will take place at the Holiday Magic exhibition at America’s Center in December.

The third goal of the PetLover Coalition, explains Cohen, is education about responsible pet ownership. “We have targeted the zip codes where we know more animals are coming from, and our advisory board members help us get information to the families who live there,” she says.

Another Nestlé Purina initiative, the One Hope Network, was introduced in St. Louis in 2008 to feed pets in need and raise awareness about animal welfare. The program serves more than 120,000 animals throughout the United States. Explaining the importance of proper nutrition, Cohen says, “All of the dogs and cats at these shelters are fed Purina ONE because higher-end foods improve their physical condition and appearance. When they look and feel their best, they have a better chance of being adopted. It really makes a difference!”

On the Cover: Nestlé Purina PetCare, a global manufacturer of pet products, sponsors initiatives in St. Louis and throughout the United States to foster awareness of responsible pet ownership and care for animals in need, including the St. Louis PetLover Coalition and the One Hope Network. Nestlé Purina PetCare is located at #1 Checkerboard Square. For more information, call 982-1000, or visit www.purina.com.