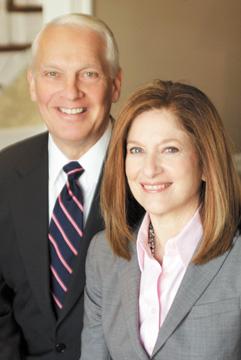 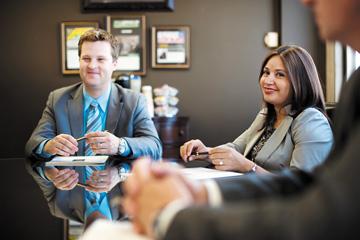 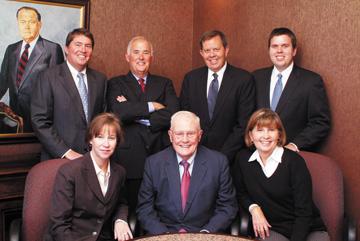 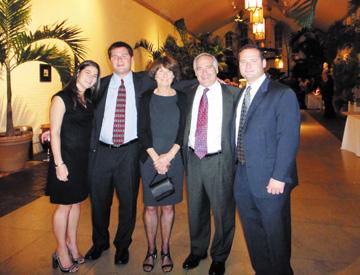 Family businesses are widespread throughout our country and around the world, and for good reason. When family ties are strong, a robust, profitable business can result. In St. Louis, we have found several families with multiple generations making their way in the field of law.

At Bruntrager & Billings you might say practicing law is in the DNA with seven family members working at the firm, including six lawyers. Raymond Bruntrager, who started the practice in 1954, is the father of attorneys Neil Brantrager and Daniel Brantrager, and office manager Kathy Billings, who is considered the ‘heart and soul of the operation.’ Then there are the in-laws: attorneys Mary Brantrager (married to Daniel) and Chuck Billings (married to Kathy). And finally, Charlie Billings, son of Kathy and Chuck, joined the family business a year and a half ago. “We may be the largest family-only law firm in the state of Missouri,” says Chuck Billings, who joined the practice 31 years ago.

With a focus on criminal law and civil litigation, there’s harmony and a family alliance in and outside of the office. For instance, the staff has lunch together every day. “We have great camaraderie and interesting lunches,” Billings notes. “We know each other’s strengths and weaknesses, and we play off that and listen to one another’s viewpoints. Each of us has expertise in different things, and everyone is willing to collaborate and help out, because it’s not just as a partner but as a family member. And we don’t have to worry about someone leaving the firm and taking clients with them. While we’re lawyers, we’re family, too.”

Away from the office, there are holiday meals, family traditions and vacations that are shared, as well. “We do talk shop at the holidays—that’s the bad part,” Billings continues. “Those who aren’t attorneys are used to it. They just roll their eyes and get another glass of wine. We all live relatively close together—and we all just got back from a vacation together. We get along real well, and it all works out.”

While working for Cordell & Cordell, Kirk and Paola Stange became better acquainted at a firm retreat in Quebec City when they signed up for a skiing outing and they were the only two people to participate. They later married in November 2007 but not before opening Stange Law Firm in September.

As partners, Kirk and Paola Stange work very closely, and with more than 200 active cases at any given time, they now have nine attorneys at their family law practice. “Any decision regarding the firm, we make together, and we normally make quick decisions,” Kirk Stange says. “This is generally a good thing because there isn’t much deliberating with a lot of people involved in the decision-making process.”

From a stylistic standpoint, the Stanges have slightly different styles. “I think I’m more the cautious one, and Paola is more aggressive, so when it comes to business decisions, we balance each other out,” he notes. “Another key to our success is that we really like what we’re doing—we really like family law.”

Each with their different strengths, the couple divides responsibilities to maximize their efforts. “We have split the firm as to what each of us oversees,” Kirk Stange explains. “I take care of the day-to-day legal matters like distributing cases and making the hiring decisions. Paola takes care of the payroll, insurance and business development. She also handles a lot of guardian ad litem work and takes care of collaborative law and mediation, while I tend to take contested divorces—the cases going to trial.”

While courtroom drama is a familiar expression, the idea of a developing romance as a trial reaches its conclusion seems to be a twist only seen in prime time—but that’s exactly what happened to Sam and Susan Hais 32 years ago. “I was a state court judge at the time, and she was trying one of her first cases in front of me,” Sam Hais explains. “She lost the case, but she won my heart. After the case was over, I asked her to dinner. About five months later, we were married.”

A family law practice, the firm has eight lawyers and five paralegals. With a small staff, the Haises work closely on a daily basis. “We bounce things off each other all the time,” he says. “She has been a practitioner since 1974, and I was a judge for 26 years in addition to being a practitioner, so sometimes we see things from a slightly different perspective. I have a tendency to be more abstract as a judge might think, and Susan is a ferocious advocate, so we run things by each other in order to benefit from our past experiences.”

Time spent at the Hais home can sometimes be an extension of their professional lives, as some cases seem to make their way into the conversation. “We try to compartmentalize our lives,” Sam Hais notes. “We have two beautiful children who are now grown, but we’re not above discussing issues that concern us.”

Of the couple’s two children, their younger daughter is carrying on the family profession as a second year law student. “It’s an honorable, ancient profession and I think any young person would be well advised to go into the law,” he says, “We feel blessed and fortunate to spend our lives in the law. It’s just one more thing that bonds us.”

Stephen Bronson, son of St. Louis attorney Mark Bronson of Newman Bronson & Wallis, knew early on what he wanted to be when he grew up. “I started working in my dad’s office when I was a kid in elementary school,” Bronson recalls. “I would go in with him on the weekends, answer the phones and work on the landscaping around his office. As I got older, I was given more responsibilities like filing and other law clerk-type work. By the time I was in high school, I knew what I wanted to do professionally, and my dad was a big influence on that decision.”

While his dad has been a lawyer for 37 years, Stephen Bronson began practicing four years ago. Working from his own office in San Diego, Stephen Bronson also practices with his dad’s personal injury firm in St. Louis. “I travel home to St. Louis a lot to see my family, and I have an office at Newman Bronson & Wallis, as I’m there quite a bit. My dad and I share the same professional goals and aspirations, and from a personal standpoint, we get along great. We have always been a close family, and now my sister has applied to law school.”

With his dad as a role model, Stephen Bronson appreciates the influence he has had on his life. “He’s a great resource,” he explains. “He’s been very successful in his practice, and that’s something we talk about. He helps the clients he represents, and that’s what I want to do with my own practice.”  LN