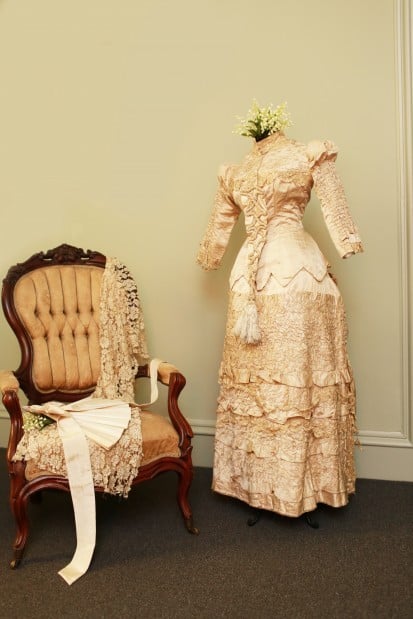 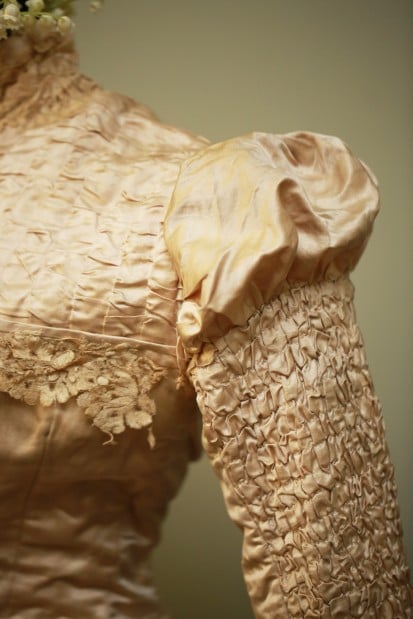 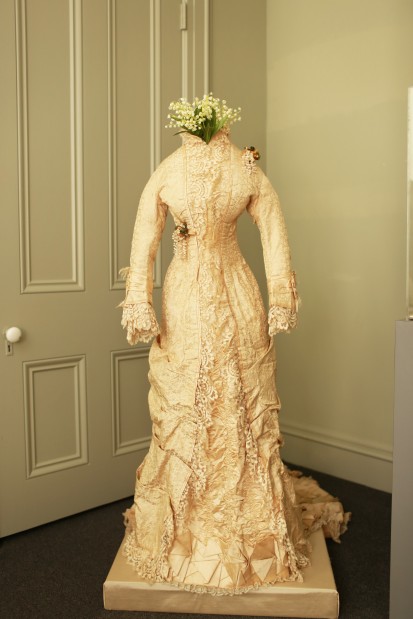 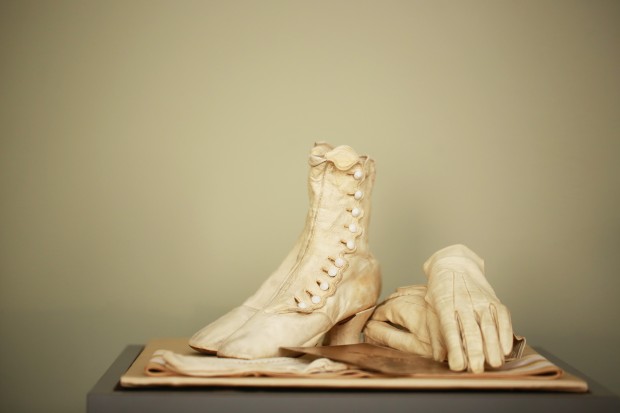 Accessories of Sallie Alexander Crumm donated with her 1898 wedding gown 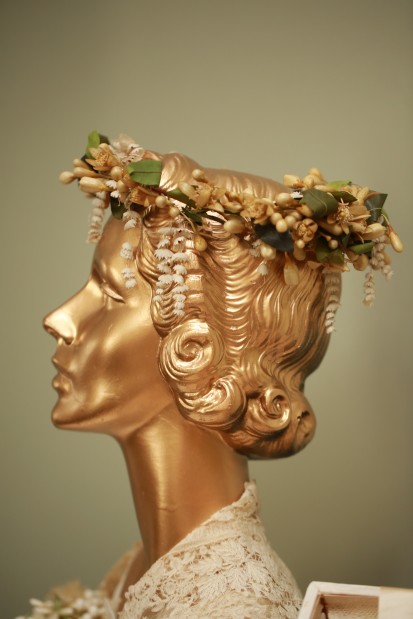 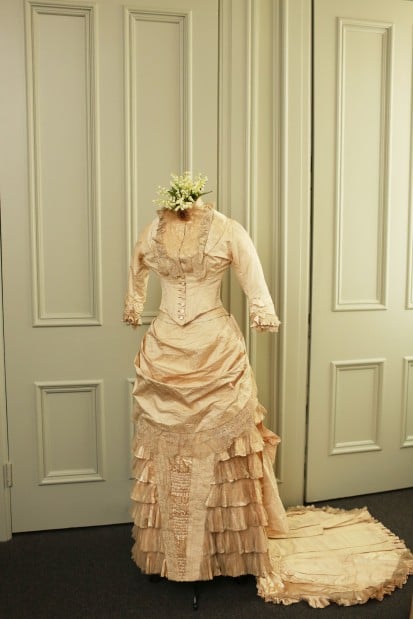 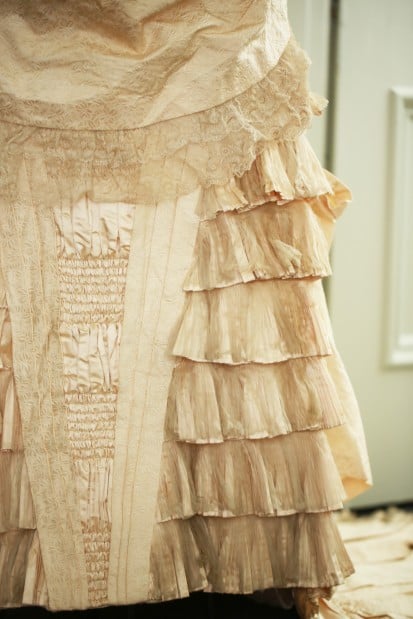 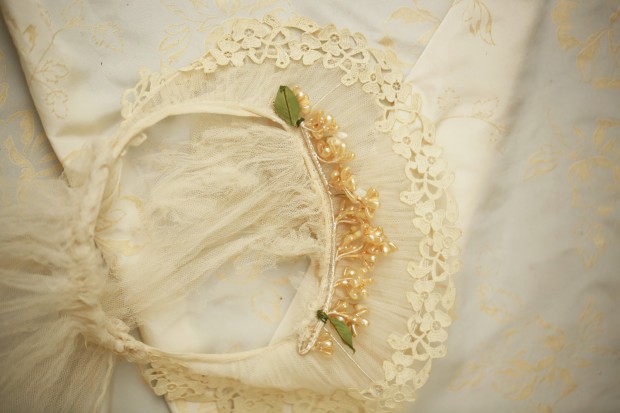 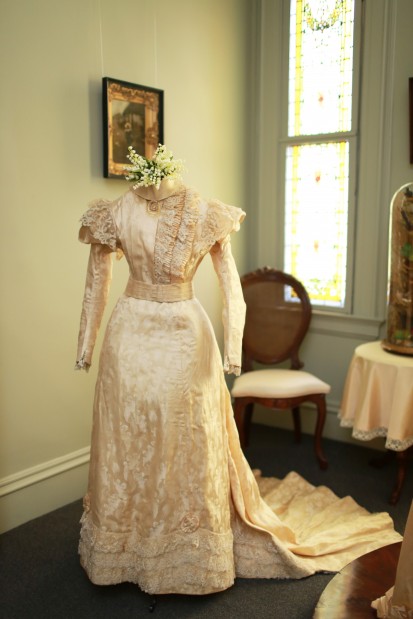 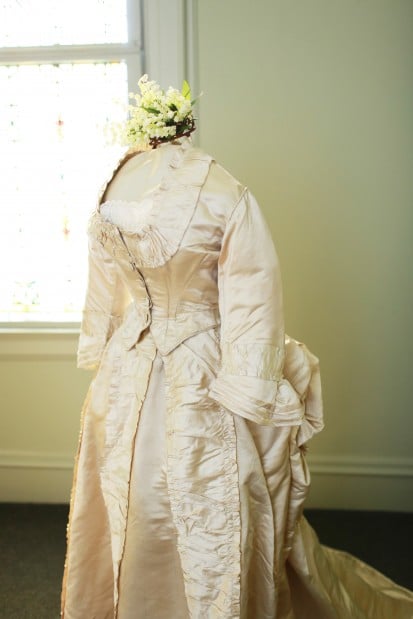 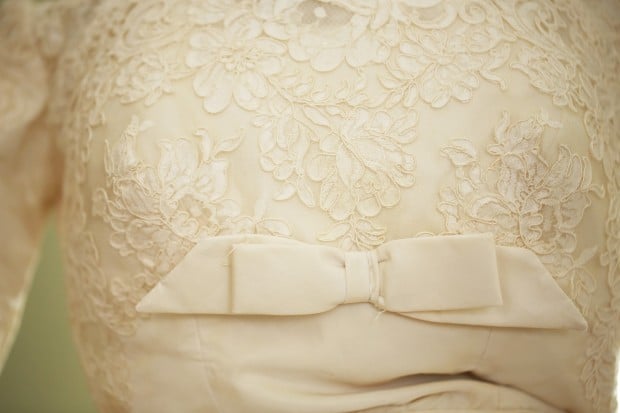 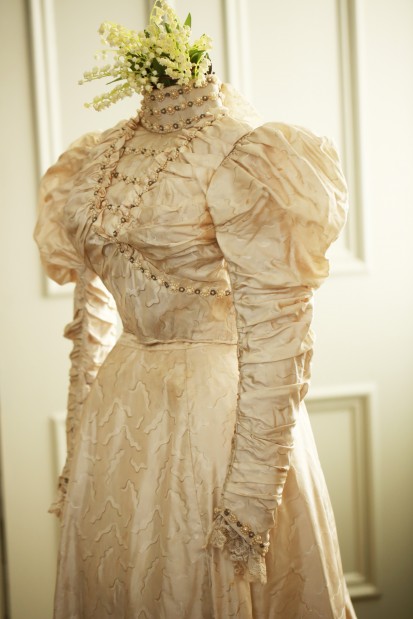 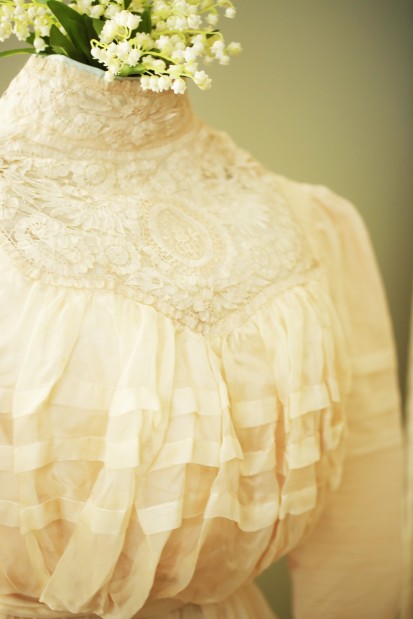 At the Campbell House Museum, a collection of historic wedding gowns showcasing the meticulous ornamentation and painstaking detail found in attire from decades past currently is on exhibit.

Attire at the Museum

The house, in the old Lucas Place neighborhood, was the home of wealthy businessman Robert Campbell and wife Virginia, who lived a life of luxurious amenities and almost unimaginable opulence. But over time, the grandeur of the neighborhood fell to the wayside; and after the last Campbell at the mansion passed in 1938, the home that entertained the likes of President Ulysses Grant was left without an owner in a deeply changed part of the city.

“As part of gathering the Campbells' original possessions at an auction in 1941, there was an opportunity to purchase back a lot of Mrs. Campbell’s gowns,” says Campbell House Museum director Andrew Hahn. After the death of the last-living Campbell child, the William Clark Society, a St. Louis history organization, worked to turn the home and its original items into a museum. Many items, including more than a dozen of Virginia Campbell’s dresses, were purchased at auction from Campbell relatives; the home was later bought by department store Stix, Baer and Fuller and given to the Campbell House Foundation.

The same year they were purchased, the dresses graced the bodies of the new high-society: 1940s debutantes. “They were modeled by St. Louis debutantes in a very early way to bring attention to the museum,” says Hahn. “They modeled them at a luncheon at the old Chase Hotel.”

Creation of the Costume Collection

The publicity stunt drew heaps of attention, and the dresses stayed on display in the museum for the next 30-some years. “They turned out to be very, very popular,” says Hahn of Mrs. Campbell’s gowns. “Out of that display, the museum created a reputation for this fashion collection. Through the 1960s, the Campbell House began to collect primarily women’s, but some men’s, attire.”

Soon, the Campbell House began holding period fashion shows. Though the newer purchases were not Mrs. Campbell’s dresses, they became a part of the new Costume Collection, which was focused on the Victorian era through the 1940s. “They were donated from individuals in St. Louis because of our reputation as an institution who promoted fashions of the past,” Hahn says. Included in that collection were the wedding dresses currently on display.

The End of an Era

While there still is a collection—as some attire, including Mrs. Campbell’s gowns and the wedding dress, were not kept in the ruined room—it marked the end of the Campbell House costume era. “Since then, we haven’t collected costumes and they've been displayed very rarely.”

Around that time, it became clear that Mrs. Campbell’s gowns were rapidly deteriorating and they were removed from permanent display; after the fire, the Costume Collection fashion shows ended, as well.

The preserved garments are occasionally brought out of storage to be displayed in the museum, with exhibits happening in 1986, 1999 and now, through the end of the year.

Bringing the gowns out of storage was no easy process, as it took some three months to find a proper way to display them. “One of the problems with the dresses is that they are all very small,” explains Hahn. “If you go to a retail display house, pretty much anything you can buy off the shelf is too big and the dresses wouldn't fit. We found some adjustable dress forms, but they either wouldn't adjust small enough, or they were very expensive.”

Once proper forms were found, the gowns were meticulously placed on display over the course of two weeks, with time gobbled up by delicate tasks like stuffing sleeves for proper hanging and bending dress forms for adequate fit. “It was a very complicated and drawn out process,” Hahn explains of the display, which spans two upper-level rooms in the mansion. “We first organized them chronologically, but since the dates on some of the dresses are a ‘circa’ date based on the cut of the dress, we decided to abandon that idea and go aesthetically.”

Despite their age, most of the gowns are in surprisingly good shape. “One of the questions we get most often is Have they yellowed or faded over time?” explains Hahn of the often buttercream-toned gowns. “And the answer is No—this was the color Victorian brides wore.” White gowns can trace their popularity back to Queen Victoria; the hue differs from what many modern brides consider the standard bright, stark white. While all gowns on display are original, some did receive minor repair during this time, such as reattaching a button.

Gowns for the Generation

On display are 11 historical gowns ranging approximately from 1871 to 1960. A vintage –inspired modern dress also is on display, completing the transitional journey of bridal fashion.

The awe-evoking craftsmanship is showcased in details such as heavy smocking, beading and petite pleating. A variety of older silhouettes are on display, ranging from high to scoop necklines, hourglass-shaping puffed shoulders to hip-enhancing bustles. A selection of dresses even have accessories; items like broaches, shoes, veils and occasionally photographs complement the exhibit.

Procrastinators interested in seeing the collection should know that Hahn estimates the next display will be in “at least a dozen years, if not longer—especially with Mrs. Campbell’s gowns. If not a whole generation, then the better part of one.” The rationale behind the wait? “Part of it is to preserve them, and also it is a monumental effort to undertake the installation.”

At the start of 2014, the lavish gowns will begin making their way back into storage. When not on display, the wedding dresses are kept in lined, specialty boxes, partially stuffed with acid-free tissue paper to avoid any sharp creases or folds. “The care is prolonging its eventual demise,” Hahn says. “Fabric can last a long time, but no fabric will last forever.” When the dresses are—delicately—touched, they are done so while wearing white cotton gloves to keep any dirt or oil on hands off the dresses. Hahn notes a simple touch might not do anything now, but could leave oil-caused discoloration visible within the next decade.

Preserving the gowns, even if they cannot last forever, is preserving a small part of the city. “I think one of the very interesting things about these gowns is that they are all connected to St. Louis,” Hahn says of the donated pieces. “They speak a lot to the wedding traditions in our own community. In a larger sense, I think it informs people how these wedding traditions have changed and evolved over time.”

Accessories of Sallie Alexander Crumm donated with her 1898 wedding gown