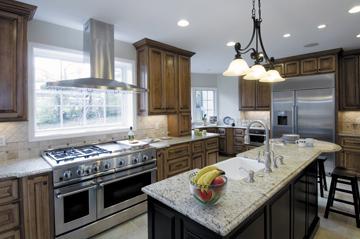 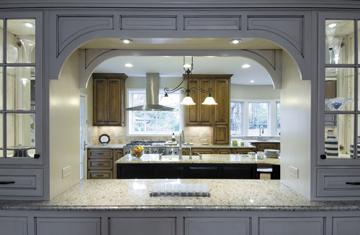 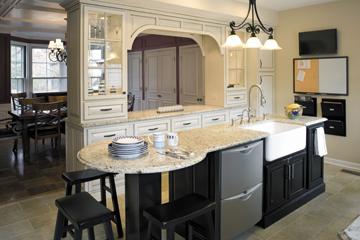 Fortunately for the husband and wife homeowners who had very different ideas about the ambitious re-do of their dated kitchen, they met Kelley Woodhead. The owner of Interior Motives helped them achieve a look they both liked. “But choosing the new cabinetry was challenging,” Woodhead laughs. “She was leaning toward white cabinets, he was thinking black. The final design incorporated three different finishes that all work beautifully together. So everybody got what they wanted!”

When the homeowners first started the project, they didn’t think there was a need for a designer. “They had already purchased new Fisher & Paykel appliances, but there were other things on their wish list that could not be included without addressing significant structural difficulties,” Woodhead explains.

The wish list began with a center island, but incorporating that work space was a challenge in the narrow room. “The kitchen provides access to the backyard,” Woodhead says. “So we needed a spacious area for the cook to work that was outside of that traffic pattern. There wasn’t room to do that in the original footprint, so I began by borrowing a few inches of space from the dining room after removing the dividing wall.”

In its place, Woodhead designed a wall of cabinetry that added counter space and storage accessible from both rooms. Ceiling-height cabinets with double glass doors frame an arched opening that permits both spaces to share natural light. “It gave them more storage, more light and more prep/serving area,” Woodhead notes. “Even though the dining room is a bit smaller, it looks and feels larger than it was before.” Additional kitchen wall space was acquired by closing off an unneeded second doorway to the hall, she adds.

On the south wall, a vertical support beam posed a problem during construction when it was not framed-in properly. “The homeowner was there while they were working on it, and she thought it would be OK,” Woodhead says. “But when you don’t do this for a living, sometimes it can be hard to envision how something will look. When I arrived, the wall was complete and the electrician was finishing up.” Because of the framing, she explains, the room lost a few inches of critical floor space. “The contractor didn’t do anything wrong—it was just a miscommunication—but it left us in a bit of a pickle. Fortunately he was very nice about it and reconfigured the wall.” Top and bottom shallow cabinets were specifically crafted to complete the structural camouflage.

With a dual background in construction and design, Woodhead understands the importance of communication. “When there are unexpected problems like this one, they need to be addressed immediately,” she explains, “and the homeowner may not have the expertise to make the right call.”

Sometimes the ‘right call’ is a leap of faith, and that was the case for Woodhead’s proposed solution to the original dilemma, the color of the custom cabinets. “The homeowners were hesitant about using three different finishes,” she notes. “But when it was all done, they loved it!” The diverse colors are unified with backsplash, walls and porcelain tile flooring in neutral tones, as well as granite counters in a palette of coordinating hues.  LN

When tasked with creating an elevated space for entertaining, Karen Korn of Karen Korn Interiors crafted this moody escape.

Alexis Austin, owner of St. Louis-based Curio Press, has invited her more than 11,000 Instagram fans to follow along as she builds her dream home in Kirkwood.

The founder of a new St. Charles storefront, Fig & Sparrow, thinks the heart of the home is more than just a place to prepare meals – it’s a place to make memories.

Spruce Up Your Holiday Décor With These Indoor Plants

Enjoy them for the season, and then happily let them go after celebrating their colorful contribution to your winter décor.