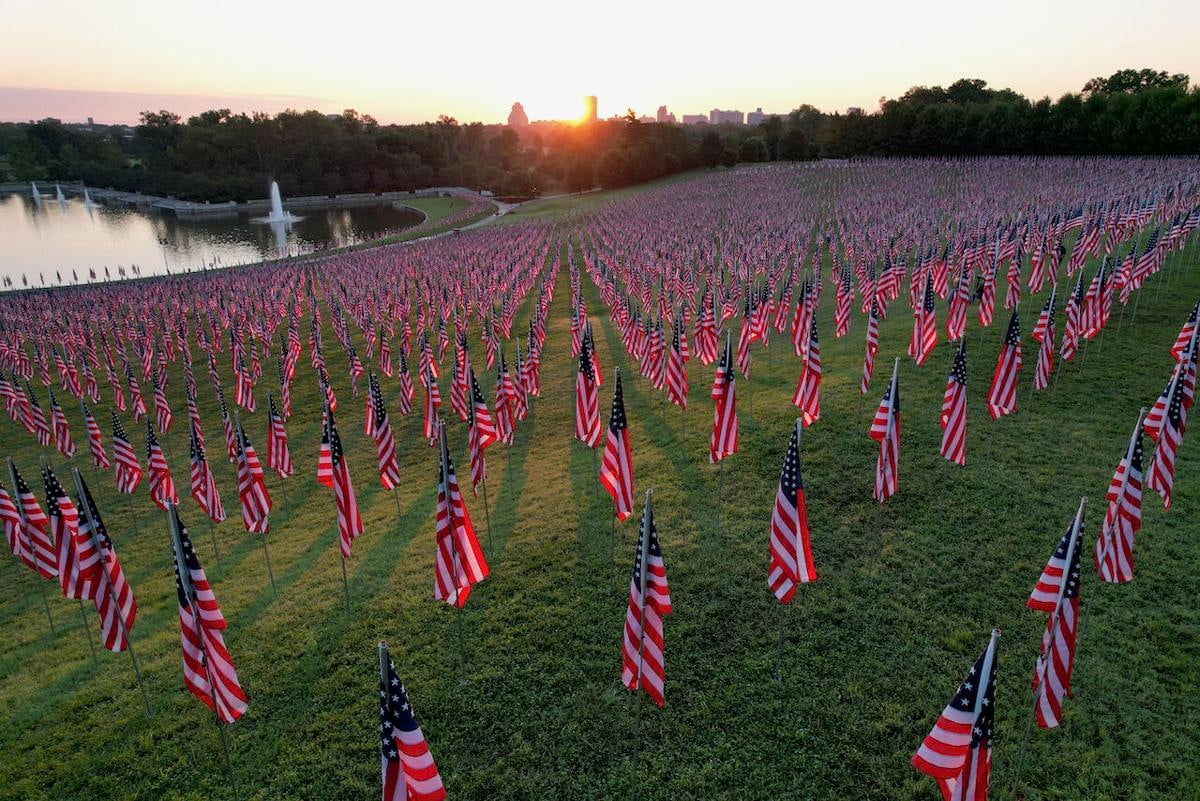 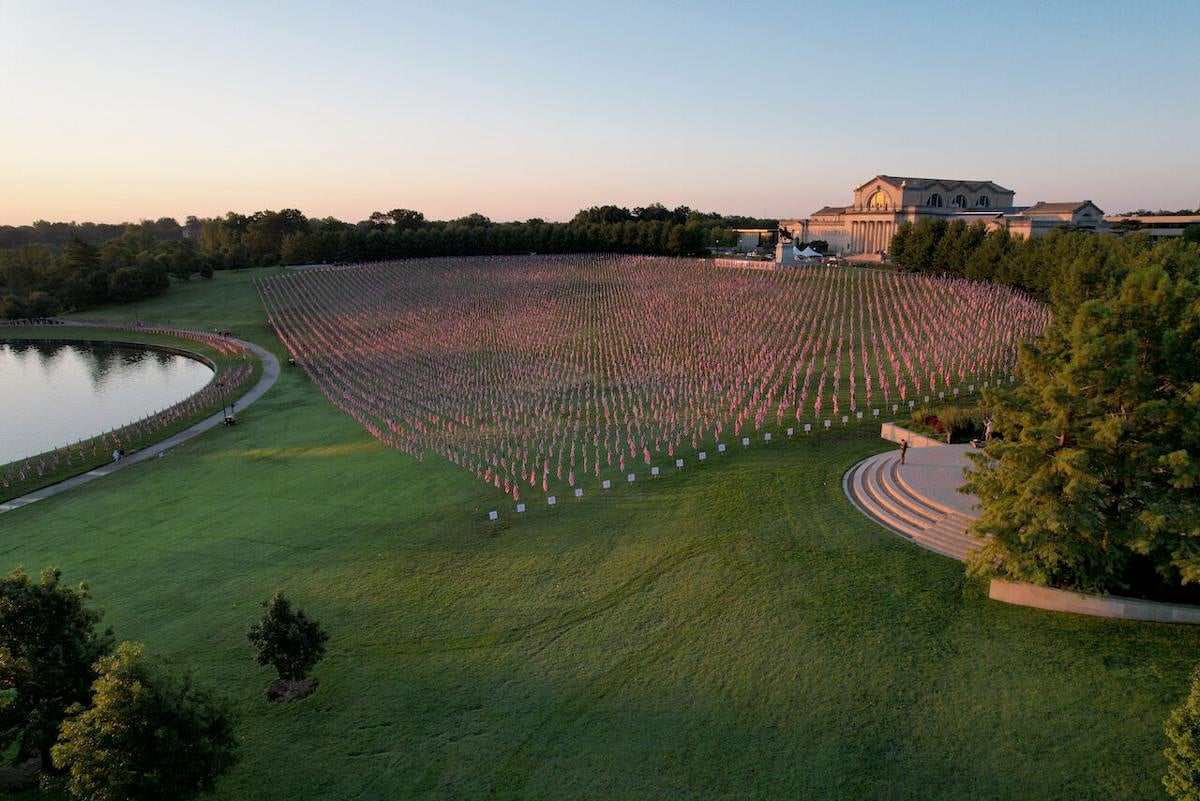 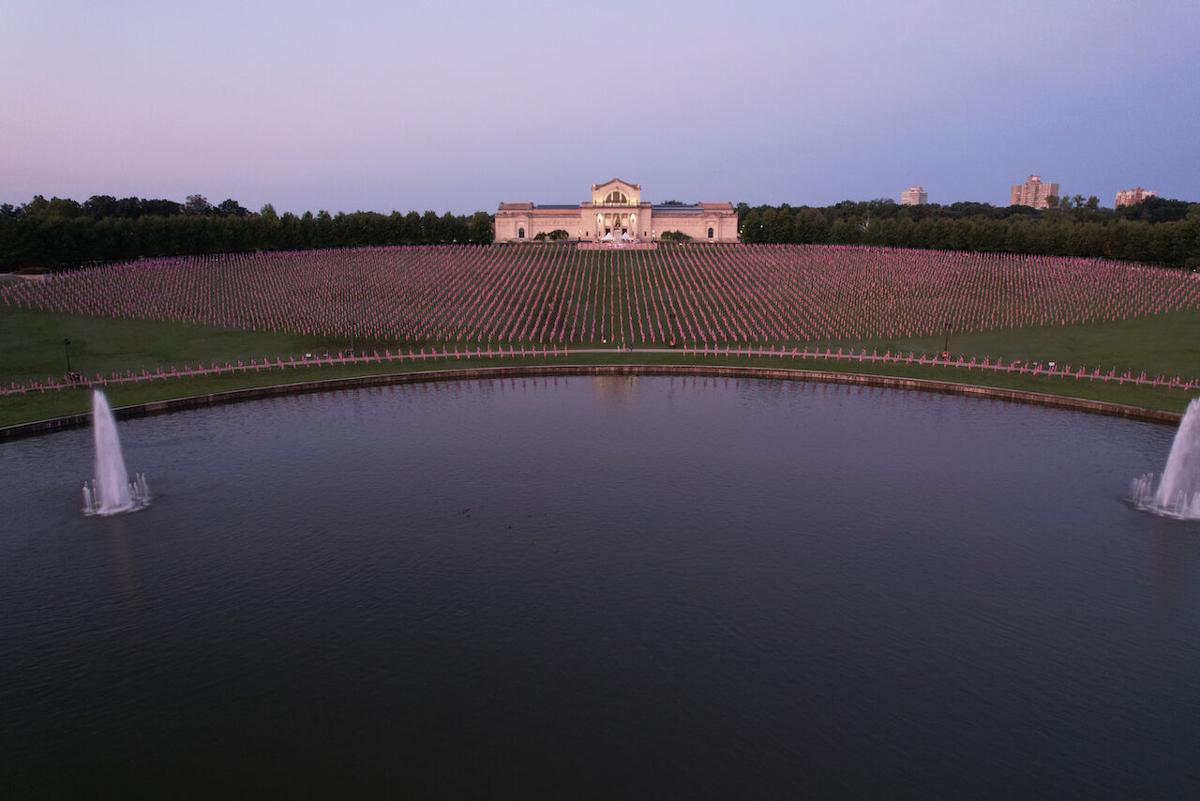 Two full decades after 9/11, the heartbreak and the horror of that four-pronged terrorist attack still linger, and a free memorial to the lives lost in the al-Qaida assault that day now graces St. Louis’ Forest Park.

Starting Sept. 4, an organization known as Flags of Valor St. Louis is commemorating the 20th anniversary of the Sept. 11, 2001, terrorist attack on the World Trade Center and the Pentagon and the attempted attack on Washington, D.C., with more than 7,600 flags arrayed atop Art Hill till Sept. 12.

The flags, which each measure 3 by 5 feet, honor the 2,997 New York first responders who died saving lives or trying to do so on 9/11, as well as all of the U.S. troops who have died in the war on terror since then.

The Art Hill display incorporates six large boards showcasing photos, specially made dog tags and information on each of the victims of the 9/11 attack.

The memorial includes the 13 troops killed in the Aug. 26 suicide bombing at the airport in Kabul, Afghanistan. Those slain troops included 11 Marines, one soldier and one sailor, all but one of them in their early 20s and one of them – 20-year-old Marine Corps Lance Cpl. Jared Schmitz – from Wentzville.

St. Louisans Rick and Susie Randall founded Flags of Valor – America’s Heartland Remembers 10 years ago to commemorate the first decade since that devastating Tuesday morning in Lower Manhattan in specific and in the U.S. in general. The memorial recurred for 9/11’s 15th anniversary, and momentum and support for it have since blossomed.

As a fundraiser this year, individuals can sponsor an Art Hill flag for $50, with every effort made to bestow that flag on the relevant Gold Star Family (the immediate family member or members of a serviceman or servicewoman slain during a time of conflict), according to a press release.

The fundraiser has a goal this year of $400,000, with all proceeds going to a quartet of area military nonprofits: Greater St. Louis Honor Flight, the Missouri Military Memorial Foundation, the Patriot Training Foundation and Semper Fi & America’s Fund.

Cleaning House? Here Are 14 Charities to Donate Your Items in the St. Louis Area

To join in the effort to support worthy causes by donating clothing, home goods, appliances, computers or even a car, here’s a guide on how to give a hand to some of the charities helping those in need locally.

After Julie and Greg Yawitz's daughter was diagnosed with autism, they "made a commitment to provide her with every opportunity available.”

Contributing writer Sarah Ding, a freshman at John Burroughs School, talks to Carter Cashen, a junior at Thomas Jefferson School in Sunset Hills, about his volunteer work with the nonprofit Legacy: Lost and Found.

What’s the truth about maintaining a healthy digestive tract? Dr. Muddasani Reddy, a gastroenterologist with Mercy St. Louis, has the answer.

Tips on Nonprofit Fundraising Amid the Pandemic

St. Louis area philanthropies were forced to pivot during the past year and a half from traditional in-person events to boost donor dollars to more unconventional virtual experiences.

After 45 years of dedicated volunteerism, Pam Toder has been elected president of the Women of Achievement organization.

With the opening of the new Integrated Veterinary Pain Management Center in St. Louis, the Animal Medical Center of Mid-America is putting pet comfort at the forefront of care.