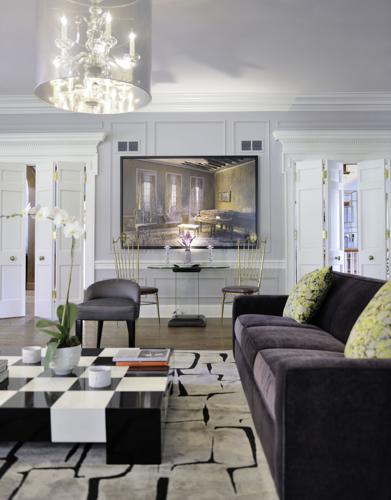 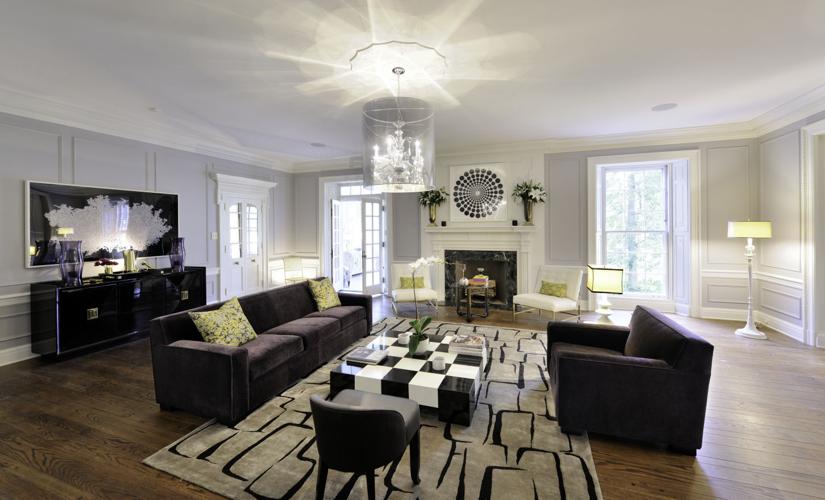 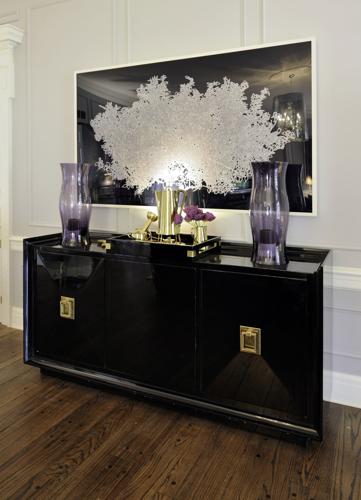 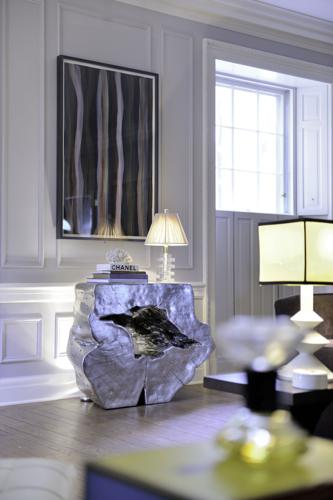 The parlor may be one of the most formal rooms in the home, but the design David Deatherage of David Deatherage Design applied to the space is decidedly not. Rather than reinforce the inherent formality of the room’s Georgian-style architecture, Deatherage decided to break with tradition and create a space that is unexpected and unconventional.

“My first impression of the house was that it seemed grand,” says the self-taught designer, who has become known both locally and nationally for his love and mastery of the vintage modern style. “It seemed built for formal entertaining. I found the salon immediately enchanting and pictured an elegant room that juxtaposed contemporary art and modern furnishings against the formal austerity of the architecture. I saw a room that, instead of feeling stuffy or off-putting, is intriguing, comfortable and a touch playful.”

Drawing upon his almost encyclopedic knowledge of vintage modern design, Deatherage assembled noteworthy pieces ranging from art deco to mid-century modern. Among the room’s most important furnishings is the black-and-white checkerboard table by mid-century modern master Milo Baughman. “It’s a work of art that’s both functional and playful, almost like a surreal, giant chessboard,” Deatherage says.

Also earning a spot in the room is a black-lacquer sideboard with built-in bar that was created in the 1940s by noted New York designer James Mont, who did interior design work for stars such as Lana Turner and Bob Hope. Deatherage also chose to feature a 1939 glass console in the art deco style that can be pressed into service as a game table, intimate dining table or as a surface for serving when entertaining.

He also added a silk wool rug from Holly Hunt to the mix, which he paired with an aubergine-colored velvet sofa and club chair with modern classic profiles from Mitchell Gold + Bob Williams. A pair of architectural slipper chairs with classic brass frames and white leather upholstery flank the fireplace, while another pair of brass side chairs – upholstered in aubergine leather – provide additional seating.

A great fan of high-end statement fabrics, Deatherage added a dash of pattern and color with pillows covered in Kravet Couture’s cotton velvet with an abstract pattern in shades of turmeric, black and grey, as well as pillows covered in a silk Hermès fabric decorated with silver links on a golden background. Among the rooms other noteworthy features are the oversized photograph of a miniature room by visual artist Carrie Becker, and an oversized cylindrical semi-transparent mirror film shade concealing a restored 1940s crystal chandelier.