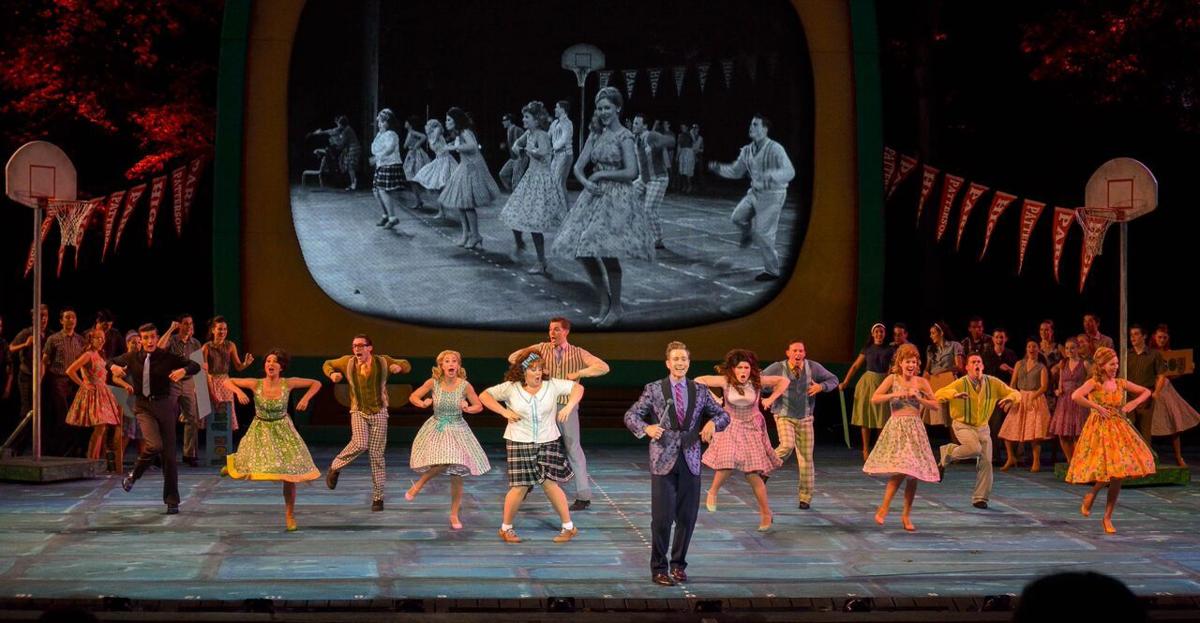 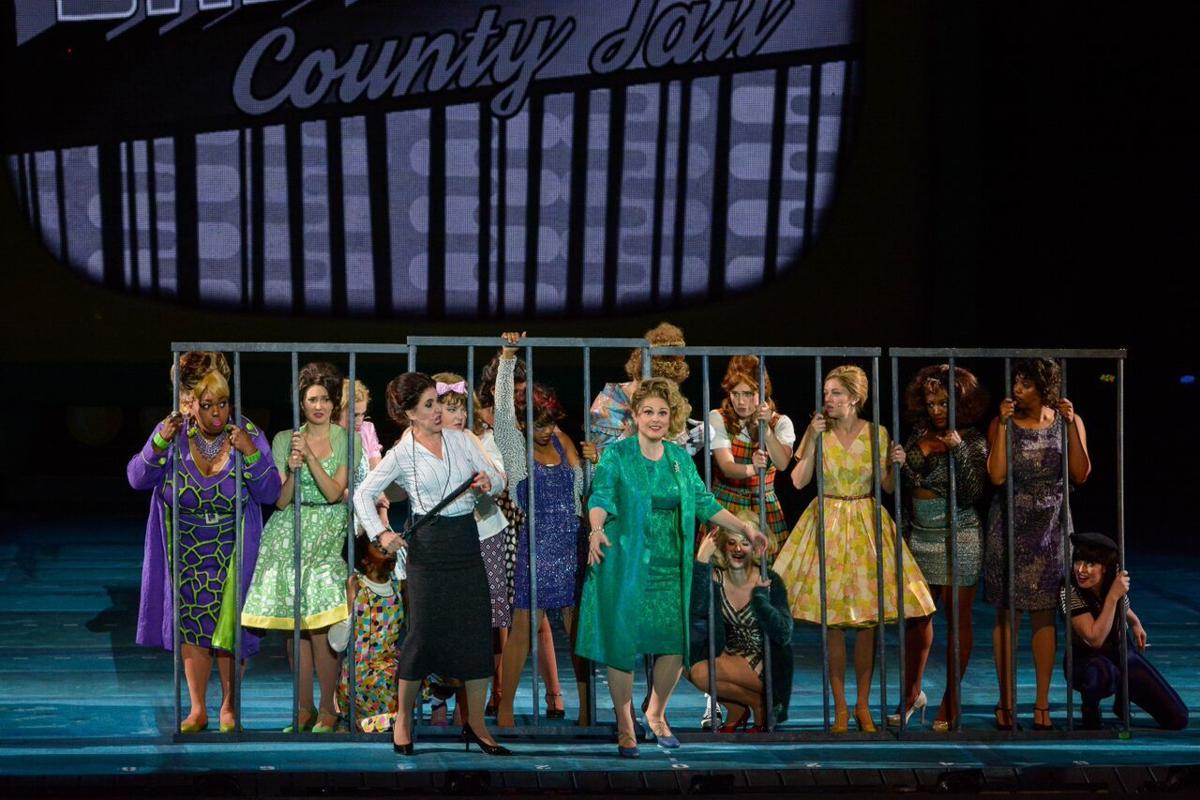 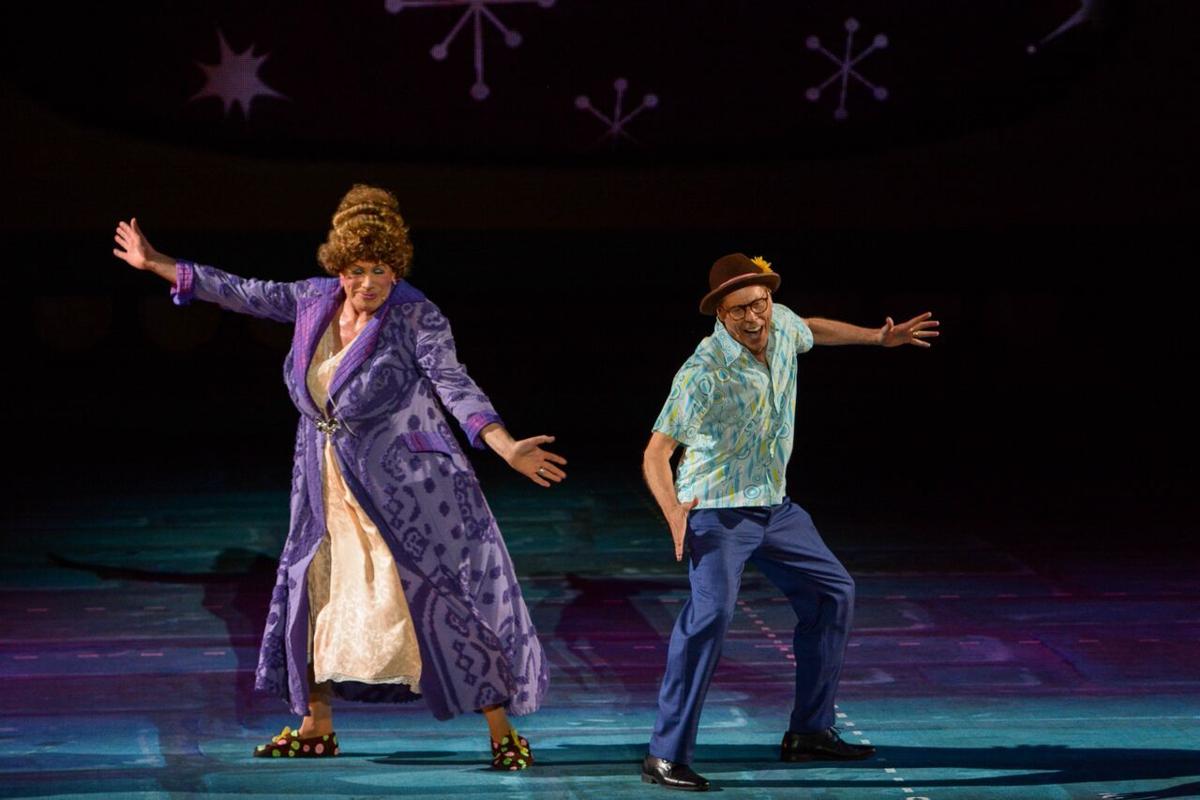 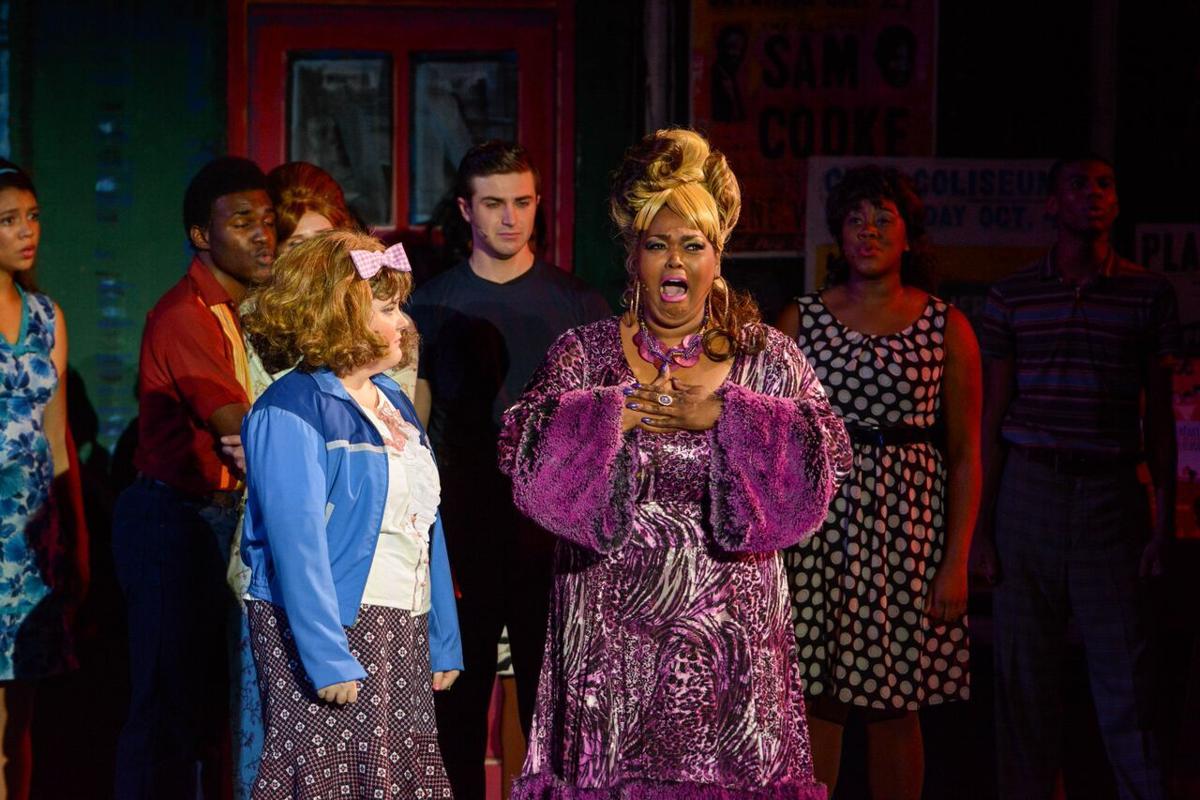 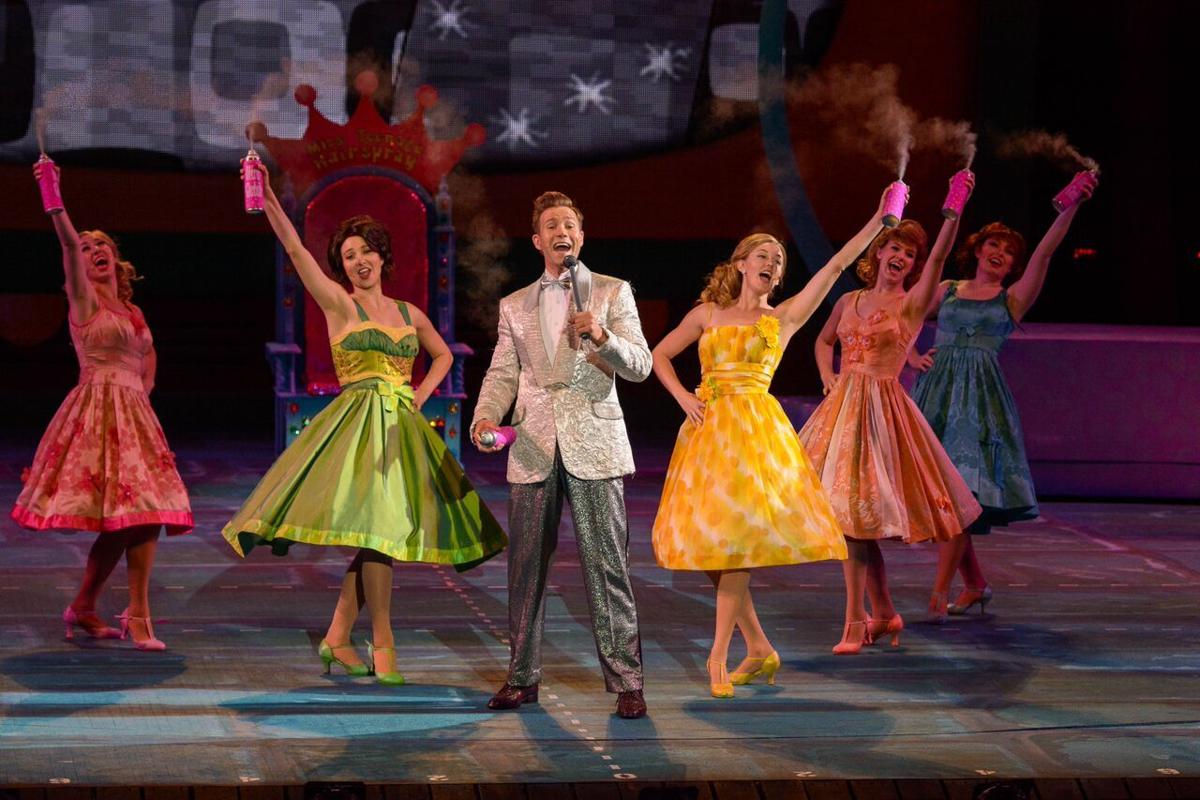 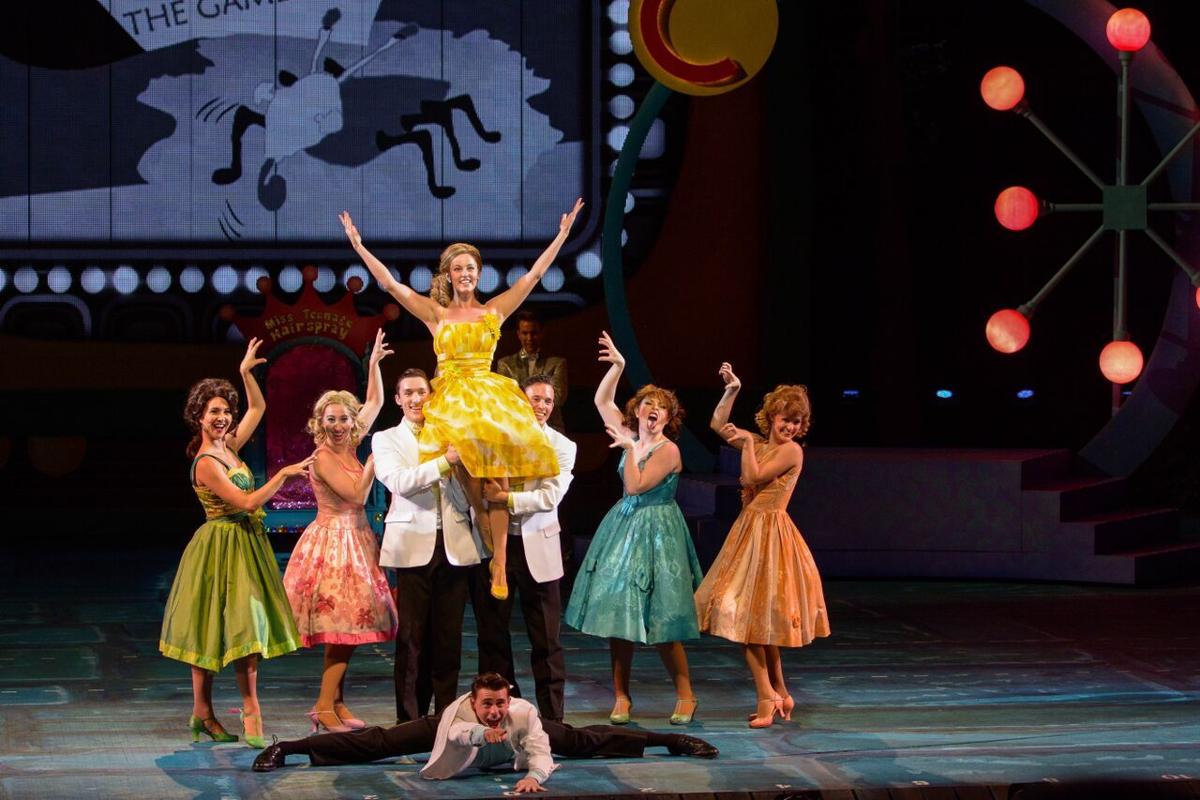 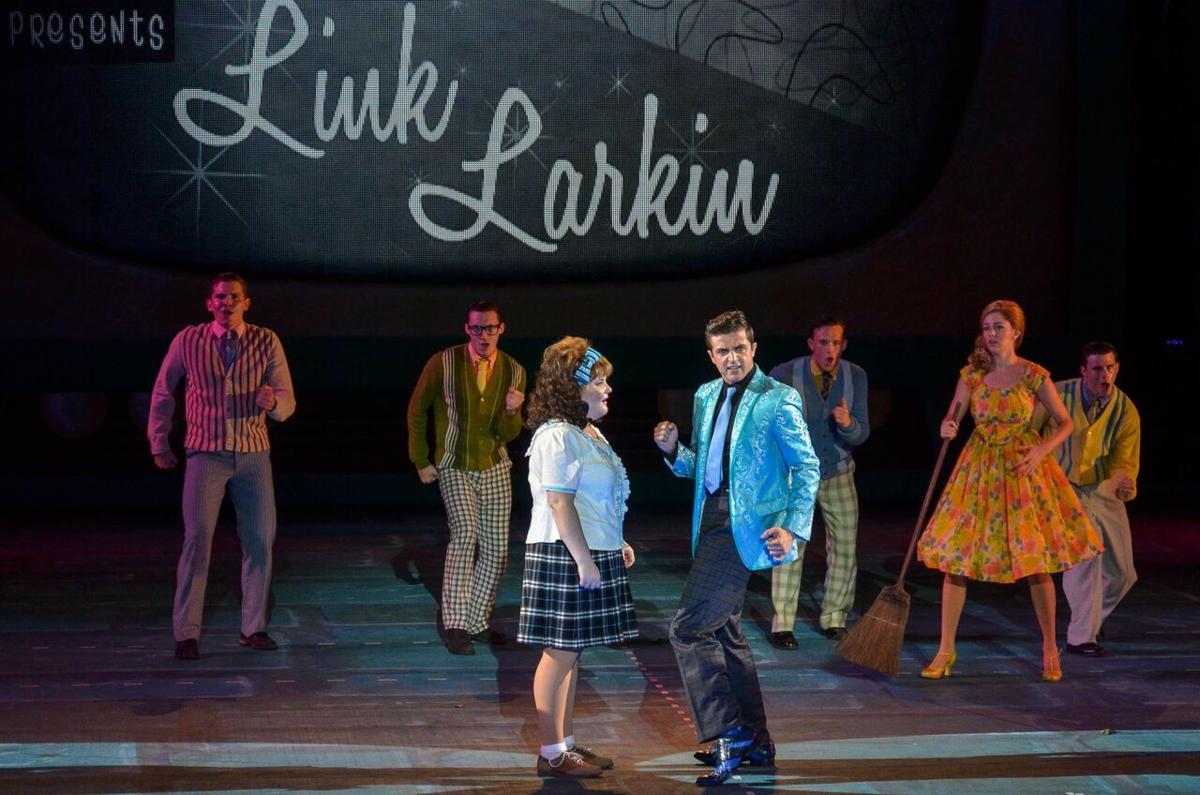 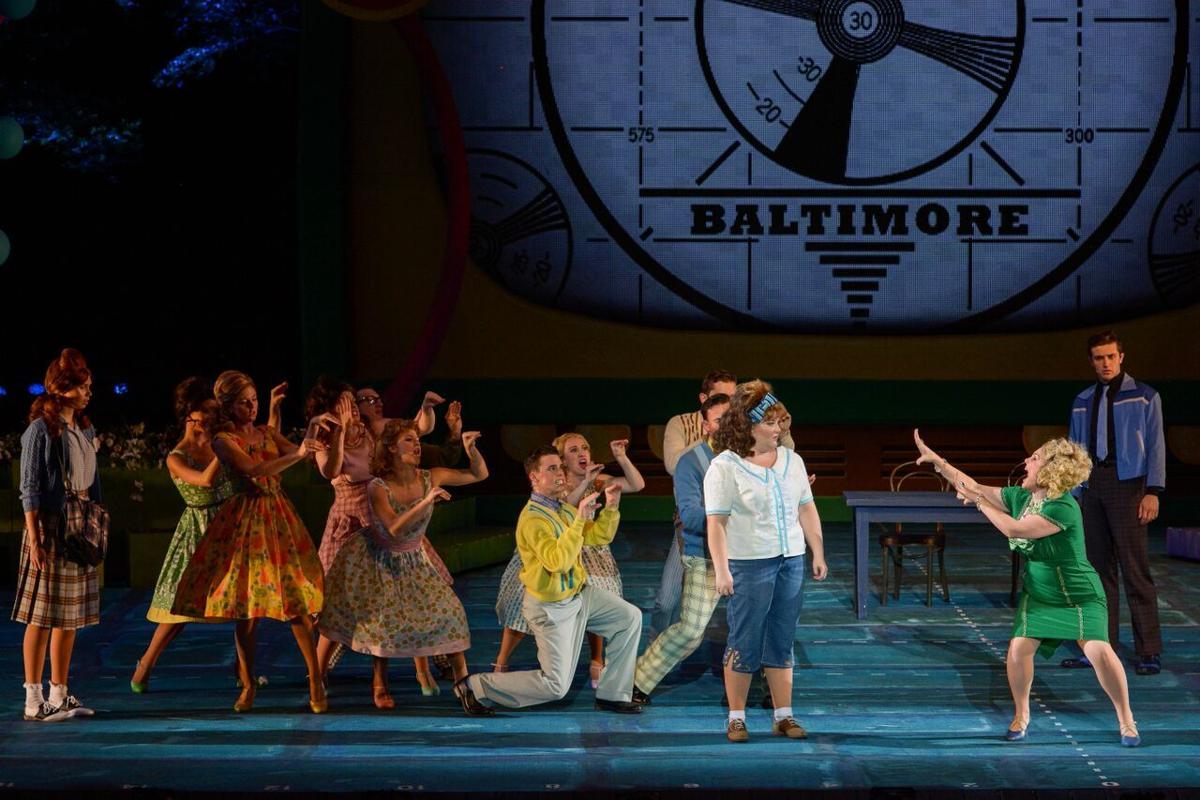 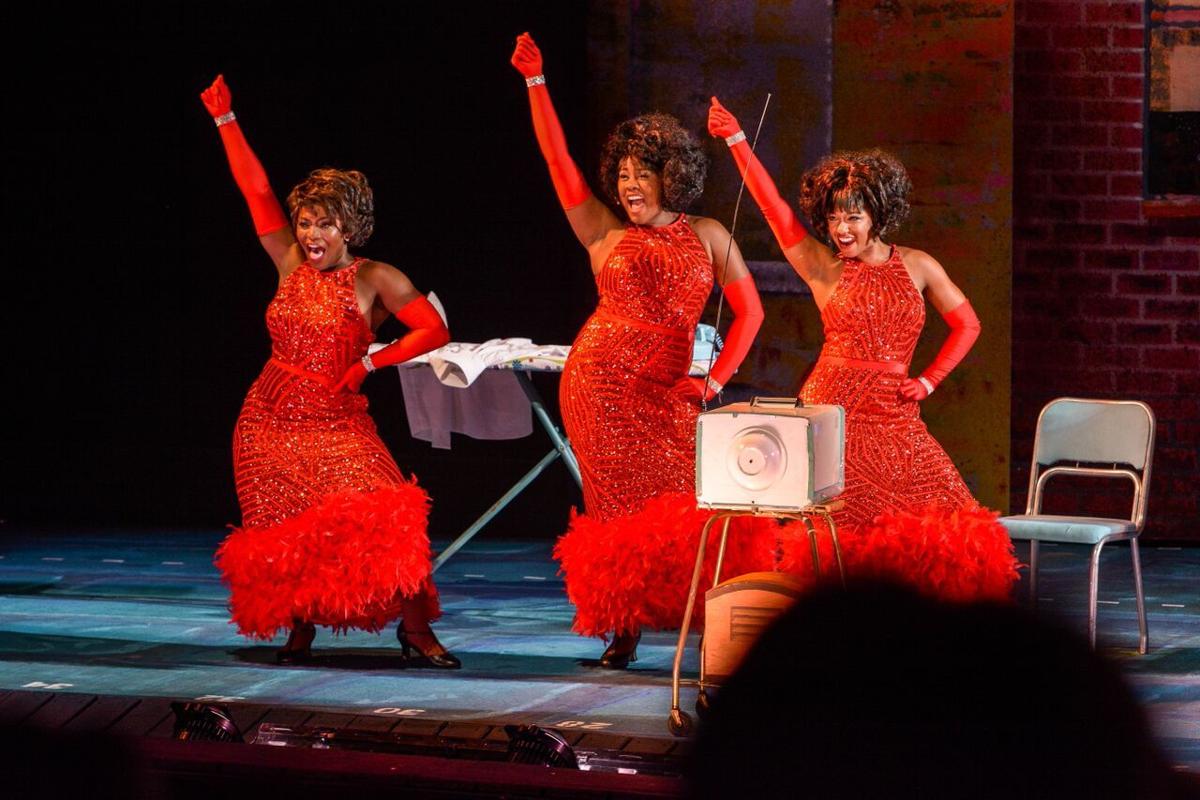 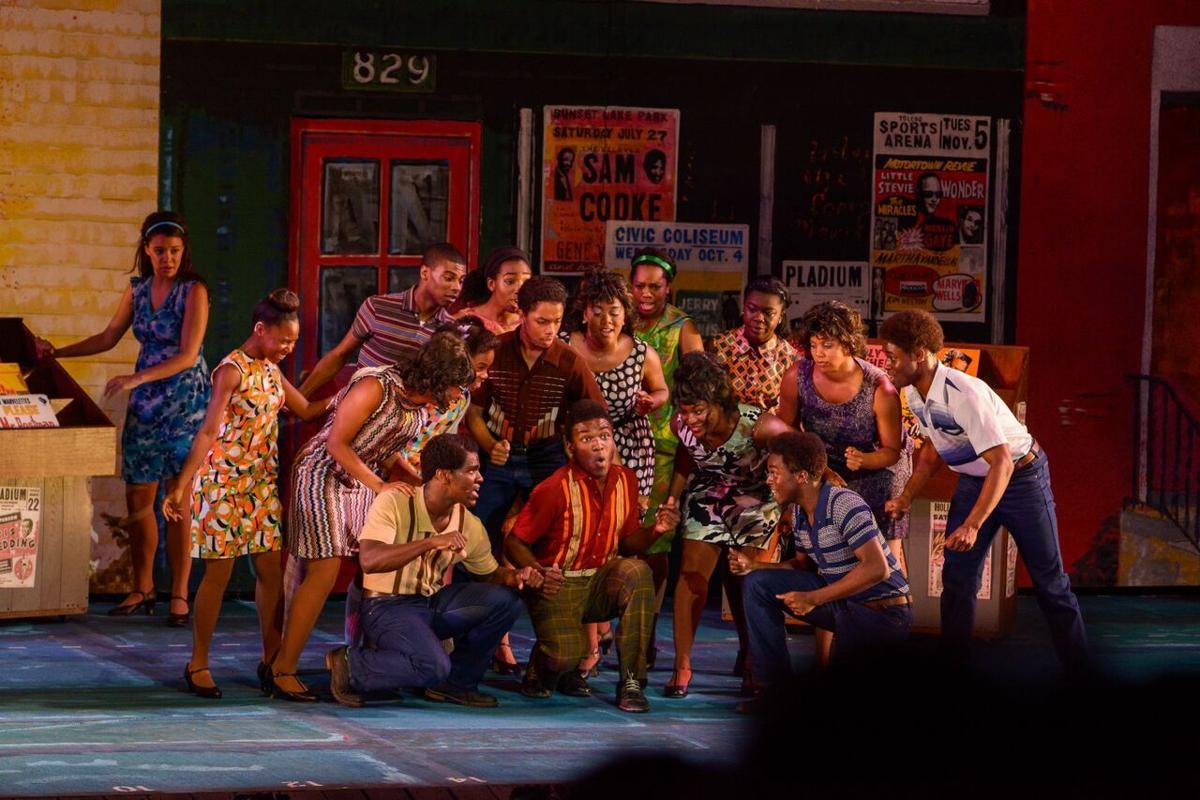 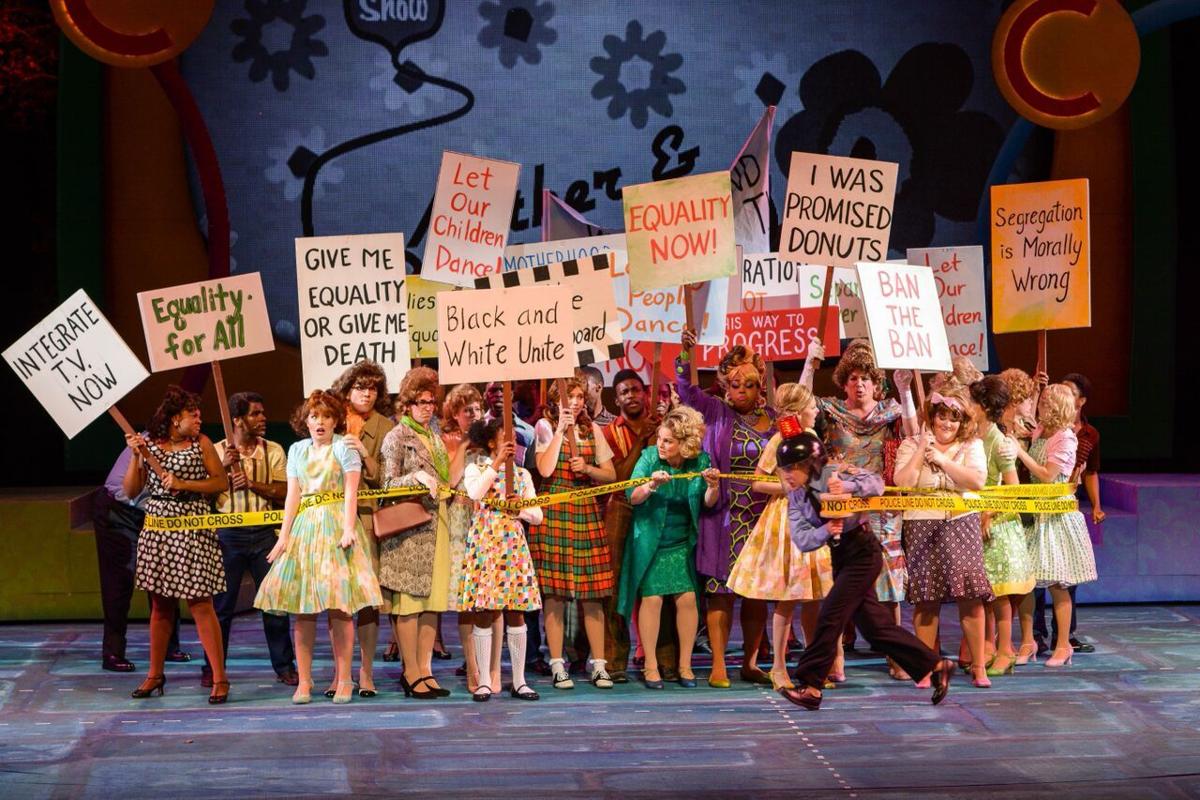 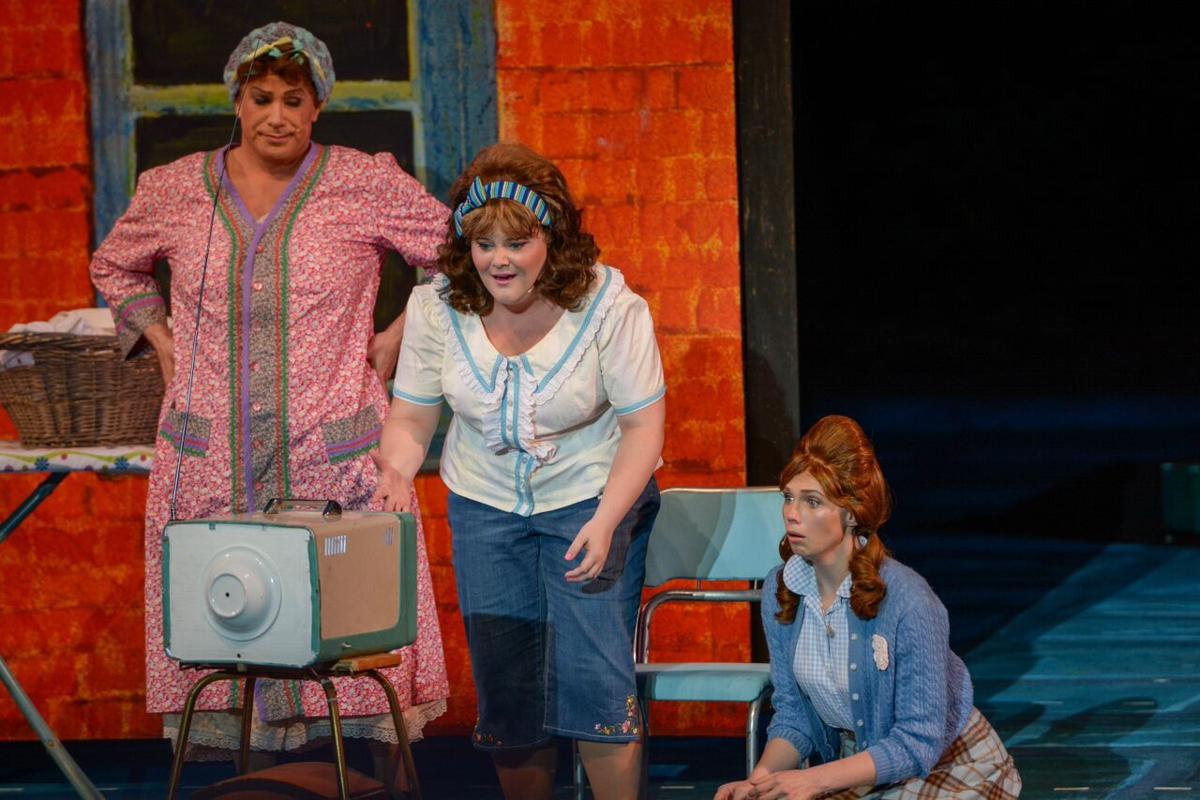 Story: Ample-sized teenager Tracy Turnblad spends her time divided between detention at high school for “disruptive hair” and watching the locally produced Corny Collins Show on her black and white TV with her friend Penny in the late afternoon. It’s 1962, and Tracy badly wants to win an audition to be a regular in the ensemble of the popular show telecast in her native Baltimore.

Despite the objections of Velma Van Tussle, the narrow-minded producer of the show, Corny is impressed with Tracy and adds her to the program’s roster. This is neato for Tracy, since she can see teen heartthrob Link Larkin up close and personal as he croons his way to a hopeful audition for bigger opportunities. Her arrival does not sit well, though, with Velma’s vapid daughter Amber, who keeps boyfriend Link on a short leash.

What Tracy doesn’t understand is why the show’s monthly “Negro Day” isn’t a daily occurrence. She lobbies hard for integration, something her reclusive mother Edna and free-spirited father Wilbur heartily endorse. When Tracy’s popularity increases, she catches the eye of Mr. Pinky, who signs her to endorse his line of plus-sized women’s wear. Rotund Edna always dreamed of being a dress designer, so this thrills her as well.

When Tracy organizes the kids who appear on Negro Day, one of its stars, Seaweed, becomes mutually attracted to Penny. His mother, Motormouth Maybelle, then joins with Tracy to speak out for civil rights. There’s more than the show’s nervous sponsor, Ultra Glow, at stake.

Highlights: Based on a 1988 movie of the same name by cult film favorite John Waters, Hairspray filled the Broadway air with eight Tony Awards in 2003 and glistened for nearly 2,650 performances before closing in 2009. A national tour followed and then The Muny presented its own previous production that same year.

Now, following the turbulent events in Ferguson, Baltimore and elsewhere in 2014 and 2015, The Muny’s second rendition seems as relevant in its theme as the era in which Hairspray is set. It’s not only topical, though. This Hairspray is an evening of high-energy, high-spirited performances that showcases the engaging choreography of Dan Knechtges and Jessica Hartman and the songs of Marc Shaiman and Scott Wittman with gloss and glamour galore.

Other Info: Star power in this version of Hairspray is not just name dropping. Bryan Batt, who impeccably portrayed creative director Salvatore Romano in the brilliant Mad Men TV series, shows his versatility with a delightful interpretation of the shy but strong-willed Edna Turnblad. It’s a role traditionally played by a man since Harvey Fierstein took Broadway by storm in his Tony Award-winning performance, and Batt is up to the challenge with his savvy comic portrayal as well as some fun song and dance moves.

Taylor Louderman, the St. Louis area native who starred in NBC’s ‘live’ production of Peter Pan last Christmas, plays the part of the vapid, spoiled Amber like the seasoned pro she already has become. She complements Ryann Redmond, like Louderman a veteran of the national tour of Bring It On:The Musical, who delivers a charming, charismatic performance as the optimistic, upbeat Tracy with verve and vivacity.

Muny favorite Lara Teeter reprises his role as the indomitably idealistic Wilbur Turnblad, demonstrating his limber musical skills on the duet number, You’re Timeless to Me, with Batt, while Liz Mikel, so irrepressible in last year’s Muny production of Seussical, shakes The Muny’s amphitheater to its rafters with her powerful rendition of I Know Where I’ve Been as Motormouth Maybelle.

Hairspray features a strong foundation of songs by composer Shaiman that pay homage to early ‘60s pop tunes and styles as well as gospel, rhythm and blues and entertaining show tunes from the opening number, Good Morning Baltimore to the infectious finale, You Can’t Stop the Beat, and several in between. Only the occasional sappy ballad (Without Love) dilutes the finger-snapping effect.

Technically, scenic designer Robert Mark Morgan collaborates with video designer Matthew Young on the cool effect of showing a ‘live’ Corny Collins telecast on a video screen designed as an old-fashioned TV, with lots of black and white close-ups of the Collins ensemble as well as fun reminders of old-time games like Cooties on the video display.

A down side to the design is the overlay of the apartment building housing the Turnblad family, which partially obstructs the view of the screen from audience left. Those pesky, occasionally balky mike gremlins were back at it for a while on opening night, too.

Among the many delights in the book by Mark O’Donnell and Thomas Meehan as well as the show’s lyrics are the references to the topical subjects of the day, from Eddie Fisher to 'three broadcast networks' to Wrigley’s gum. Audience members of a certain age smile in knowing recognition.

Knechtges directs with the same fluid, brisk pace as he did with Seussical, so that the show’s two and a half hours go by as breezily as one of his and Hartman’s toe-tapping dance numbers. Rob Denton’s lighting complements the video and scenic design, as do the costumes created by Leon Dobkowski, based on original work by William Ivey Long, and the wild wigs by Leah Loukas that evoke the era.

As the singers intone at the show’s conclusion, you can’t stop the beat. But why would you want to jettison such fun and exuberance, with its message of inclusiveness, anyway?