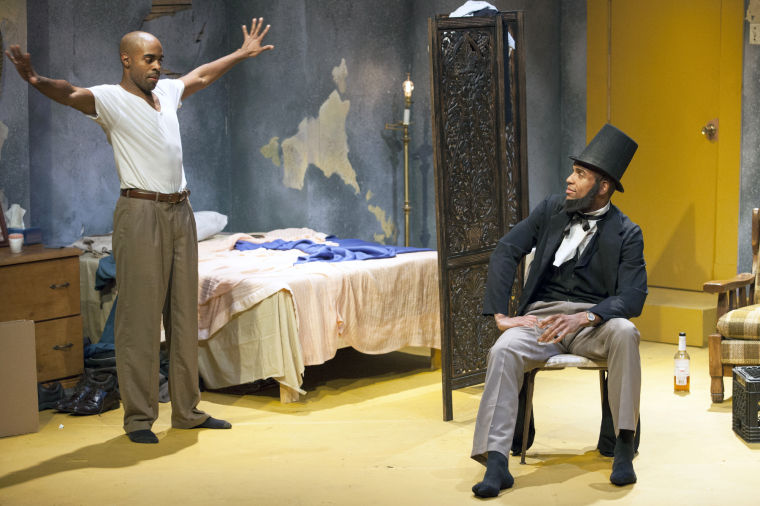 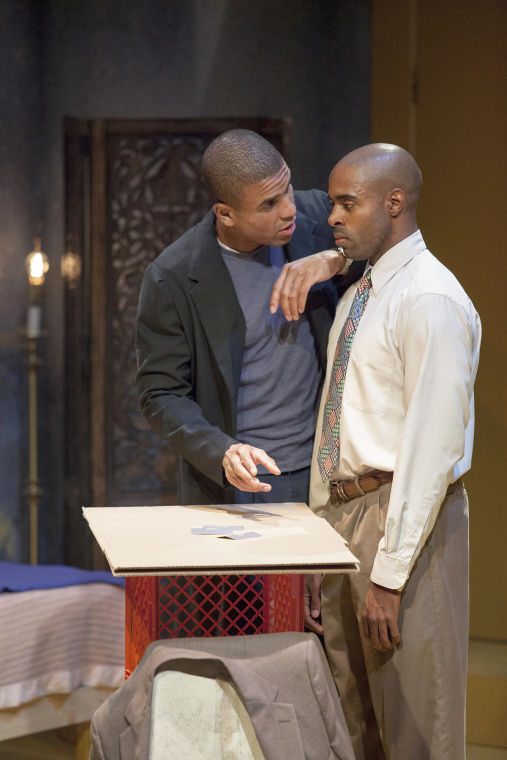 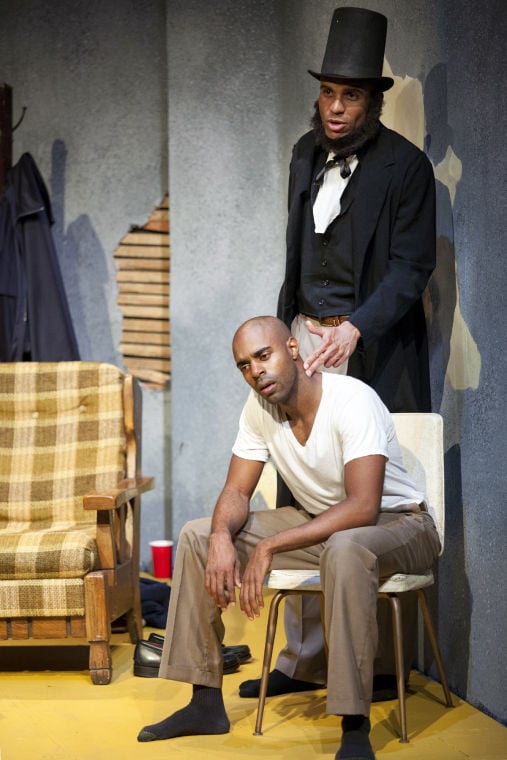 Story: Booth and Lincoln are brothers. They were given their names by their father as jokes, but their lives have been anything but funny. Abandoned first by their mother and a few years later by their father when Booth was 13 and Lincoln was 16, they’ve had to fight for their survival ever since.

Lincoln became adept at the hustling card game, Three Card Monty, and made quite a living for a while until he decided to get a more reputable job. Along the way his wife Cookie left him, so these days he shares a dingy, one-room apartment with his younger brother, running water not included. Ironically, the black Lincoln has a job at an amusement park impersonating President Abraham Lincoln on the night he was shot at Ford’s Theater, complete with stovepipe hat, fake beard and whiteface makeup.

It’s not much, but Lincoln likes his work and contributes virtually all of the money to the household. Clouds are rolling in, though, as Booth sinks deeper and deeper into moodiness and resentment. When Lincoln derides Booth’s own efforts at making himself a Three Card Monty dealer, and Booth’s relationship with a woman named Grace careens on its bumpy path, tensions escalate.

Highlights: St. Louis Actors’ Studio terms the theme of its seventh season “Sins of the Father,” and begins in robust fashion with a sizzling rendition of Suzan-Lori Parks’ 2001 Pulitzer Prize-winning drama, Topdog/Underdog. The loneliness, poverty, rejection and hopelessness of the brothers’ situation are fully realized in director Elizabeth Helman’s pointed interpretation and the scintillating performances of Chauncy Thomas and Reginald Pierre as the doomed brothers.

Other Info: Cristie Johnston paints the canvas of the brothers’ squalid surroundings with a set design that encapsulates their meager subsistence. The torn wallpaper, dilapidated furniture and bare light bulb are suitably and drably illuminated by Patrick Huber’s lighting. Carla Landis Evans provides the costumes, including a pair of nifty suits pilfered by Booth, one for his date with Grace and one for his brother, as well as a variety of props that accentuate the situation.

It’s a dark and dreary two acts played out over two and a half hours that match the futile futures of the bereft brothers, but it’s also riveting and spellbinding theater. Thomas is one of St. Louis’ most accomplished actors and superbly demonstrates why with his consistently affecting performance as Booth. He dives headlong into Booth’s mental maelstrom and displays in heartbreaking fashion the lifelong, emotional devastation wreaked upon this fragile character by his cruel fate, whether in explosive outbursts or recoiling into himself from the grip of perpetual emotional pain.

Pierre gives one of his strongest performances to date, judiciously finessing Lincoln’s own reaction to what life has dealt him, better able to handle his emotions but knowing full well the degradation heaped upon him in his throwaway job by customers, his boss and even his fellow employees. He’s every bit the big brother, consoling Booth on one hand while maintaining his superiority due to the whim of chronology on the other.

Helman defers to the rich talents of her two players as she maneuvers them skillfully through Parks’ strong and sordid but profoundly sad story. It’s a splendid production all around, one that will leave a viewer sobered to the grim reality of the people in our midst who scrape by on the fringes of society.