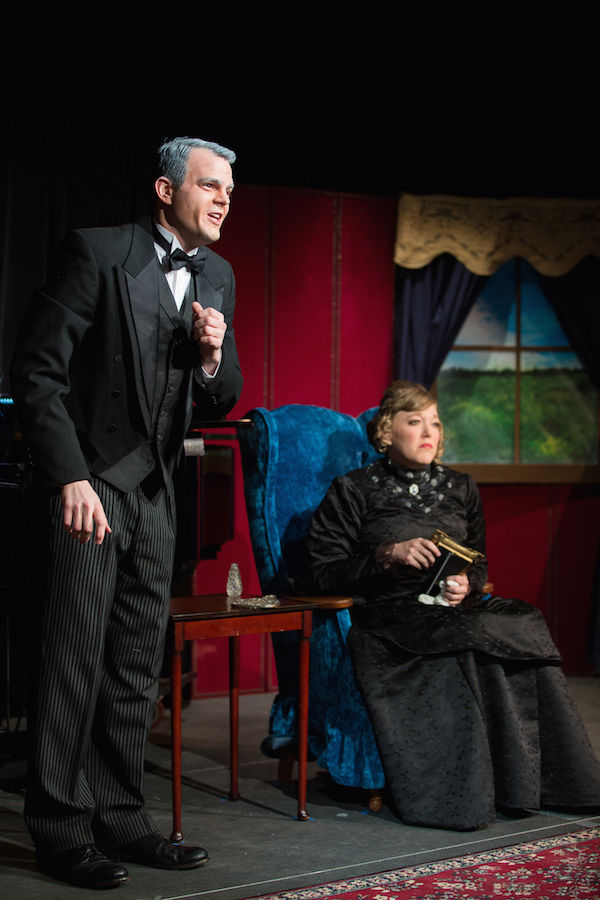 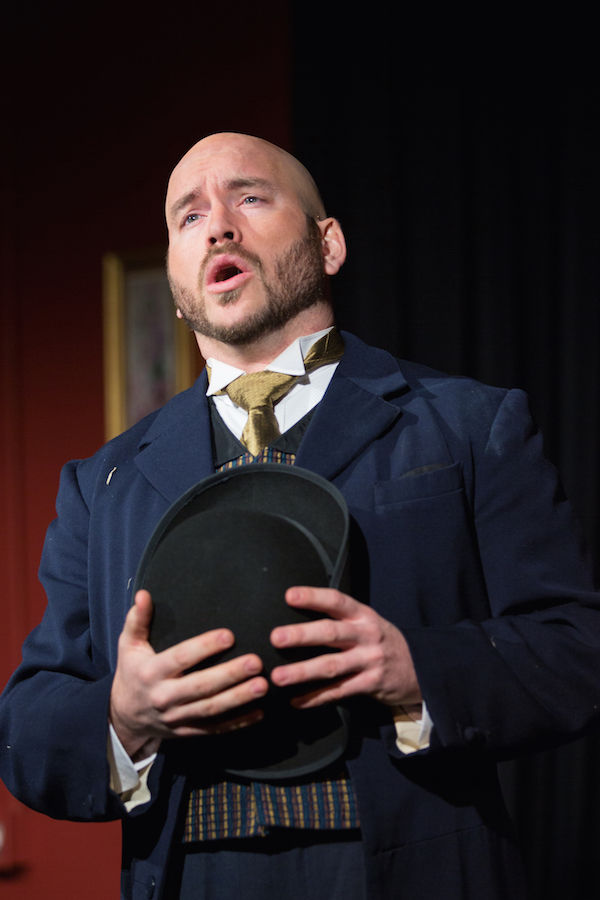 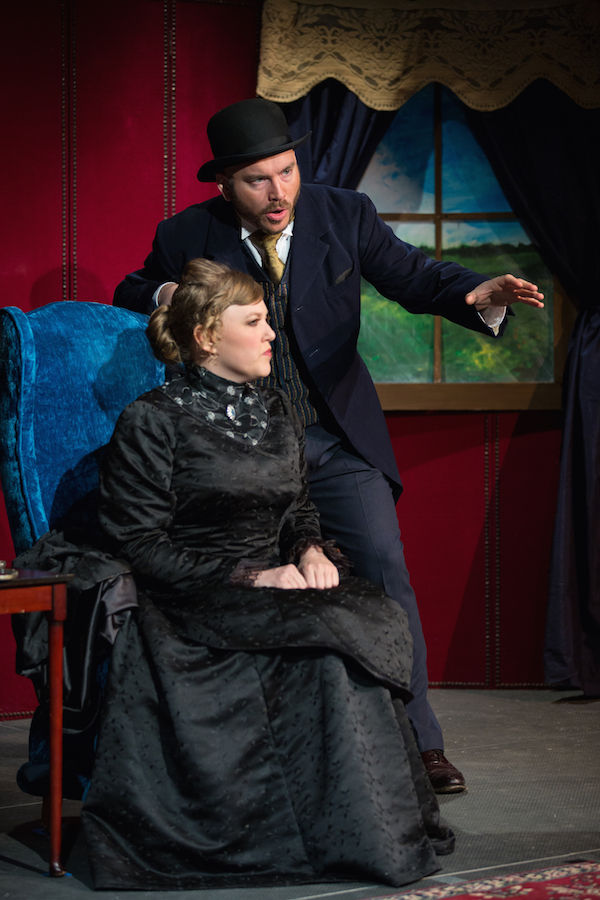 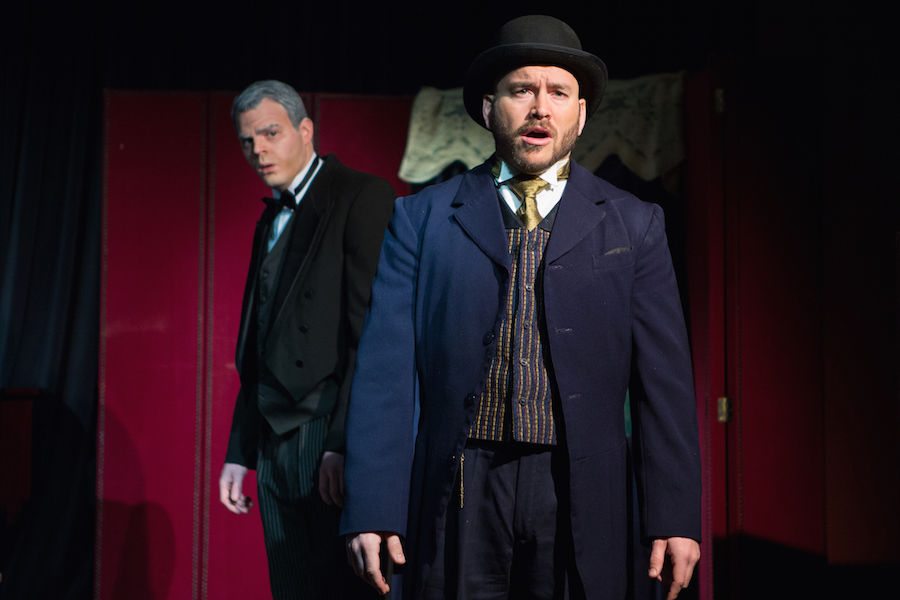 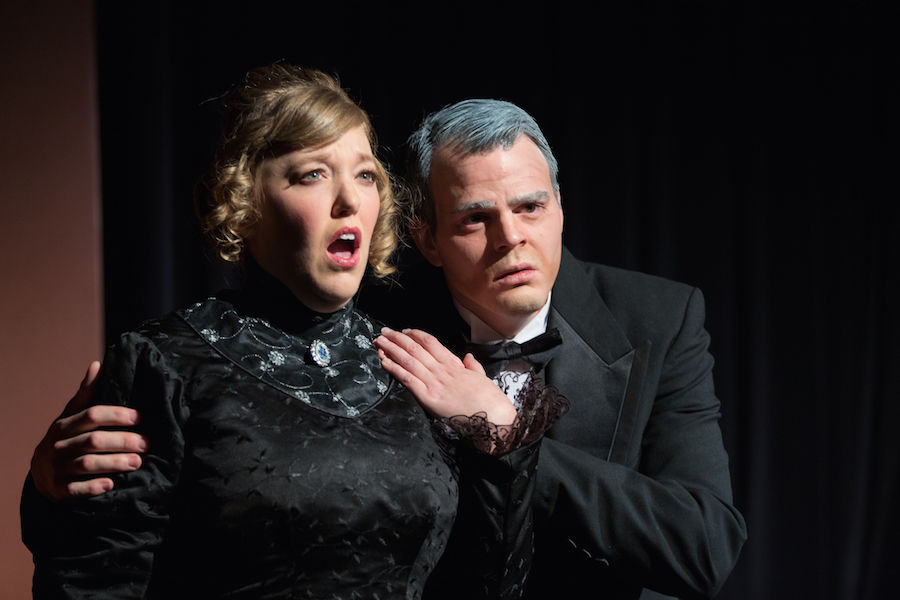 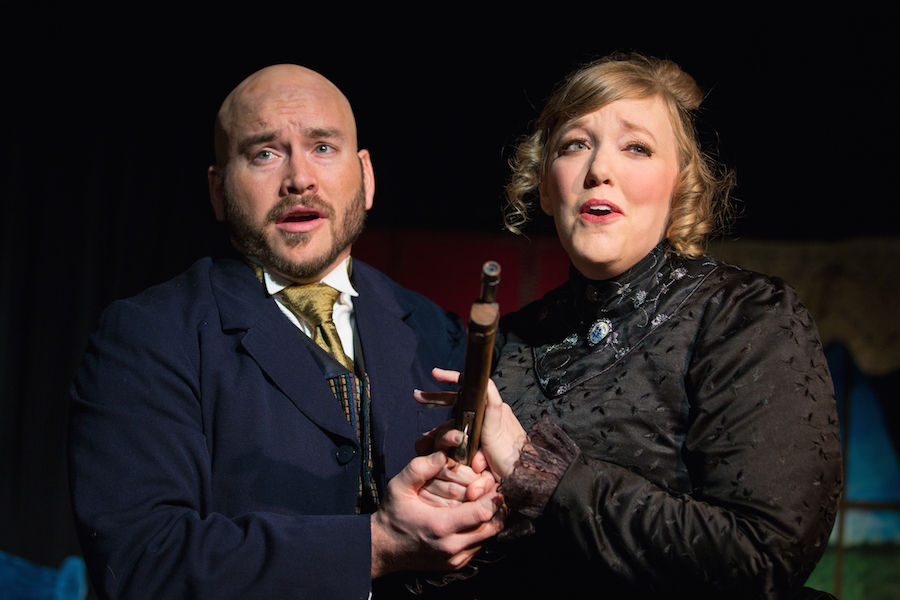 Story: It’s been one year since the death of her husband, but the pretty young widow continues to mourn. Her faithful servant tells her that he, too, grieved over the death of his own wife, but that time and life go on and that she should, too.

As she sits idly in her country house, the servant informs her that a rude stranger is at the door and wishes to speak with her. She refuses to see the man, but he barges into the home and introduces himself. He says that he is her neighbor, albeit one who lives a mile or so away.

He informs her that he has come to collect a debt owed to him by her late husband. When she tells him that she’ll pay him in two days, he says he can’t wait that long because the bank wants a payment on his home tomorrow. When the widow replies that’s the best she can do until her steward arrives, he says he’ll stay at her house until he gets his money.

As their argument escalates, they decide that they will duel each other. This is an odd duel, though, because the smitten neighbor decides to help teach the widow how to shoot her late husband’s pistol, which was more ornamental than utilitarian. As their tempers flare, so too does their growing mutual passion. These are different duelists, indeed.

Highlights: To those who ridicule the St. Louis arts scene, Gateway Opera offers proof to the contrary. Now in its second season, the fledgling troupe brings to four the number of opera companies active in The Lou, joining Opera Theatre of Saint Louis, Union Avenue Opera and Winter Opera Saint Louis, all of whom are graciously mentioned in Gateway Opera’s handsome season program.

Gateway Opera’s first selection for its two-production season was a sparkling rendition of a one-act opera buffa titled The Boor by contemporary American composer Dominick Argento. Brief, witty and intelligent, The Boor offers testament to Gateway Opera’s ability and class as a new professional performance company.

Other Info: Based on The Bear: A Joke in One Act (or The Boor), written by 19th century Russian playwright Anton Chekhov, The Boor is a bright, breezy little number featuring a libretto by John Olon-Scrymgeour and music by Argento, who won a Pulitzer Prize for Music in 1975 for From the Diary of Virginia Woolf.

Under Allyson Ditchey’s adept direction, her trio of performers made the most of the intimate stage at the Kranzberg Arts Center, filling the minuscule venue with fine voices and a flair for comedy as well.

Music director Nancy Mayo provided accompaniment at a piano at the rear of stage right, more than sufficient musically for such an intimate theater, although at times her playing seemed a bit too loud. Scenic and properties designer Kyra Bishop made do in the cozy confines with a table (ornamented with flowers) and a pair of chairs at stage right, a comfortable chair, rugs and side table in the center and a draped window at the rear revealing a painting of a pastoral setting.

Teresa Doggett’s costumes finely captured the late 19th century look with an elegant black mourning dress for the widow, a proper suit for the servant and a handsome outfit for the neighbor, complete with tails and a top hat.

Artistic director Kate Reimann demonstrated a clear, clean voice in her numbers as well as a nice comic touch in her interactions with the title character. As the boor, Tom Sitzler proved his own skills both with his strong singing style and a good way with comedy. Anthony Heinemann was a pleasant complement as the dutiful servant, showing his finesse by giving the servant a wry personality revealed in short but effective bits.

Ditchey’s direction was smooth and unobtrusive, allowing her performers to focus on their roles in a minor piece that nonetheless proves its merit as light, pleasant entertainment.

Gateway Opera returns April 24 and 25 to the Kranzberg with its production of Mozart’s The Impresario. If you go to its web site at www.gatewayopera.org, you’ll find a listing of all upcoming operatic productions around town by our four professional companies. It’s quite an impressive list.

Mark Bretz is a theater critic who has reviewed St. Louis-area productions for more than 35 years. His Bretz Public Relations specializes in simple, straightforward solutions for clients and all of their writing and public relations needs.