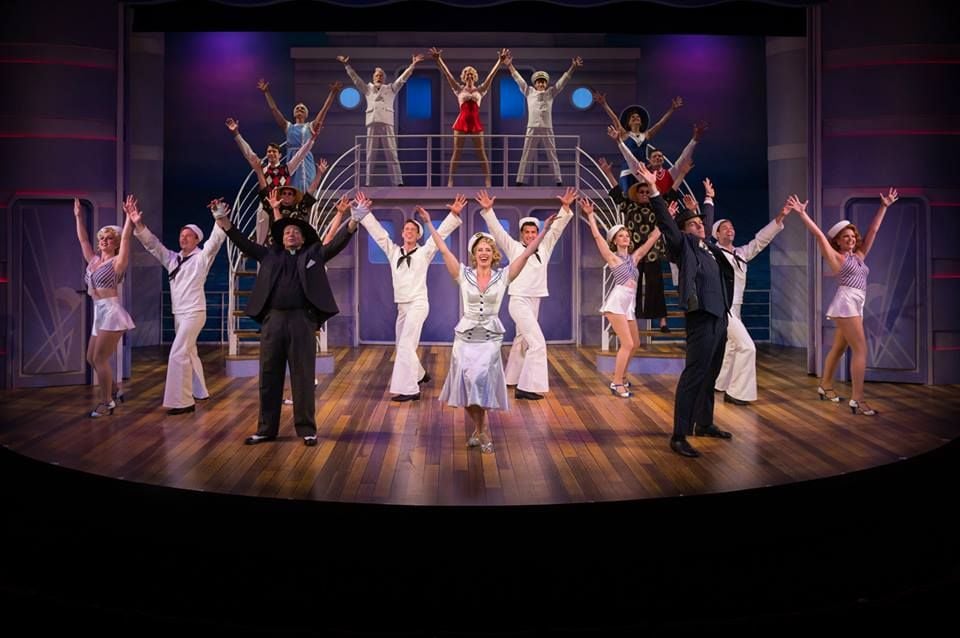 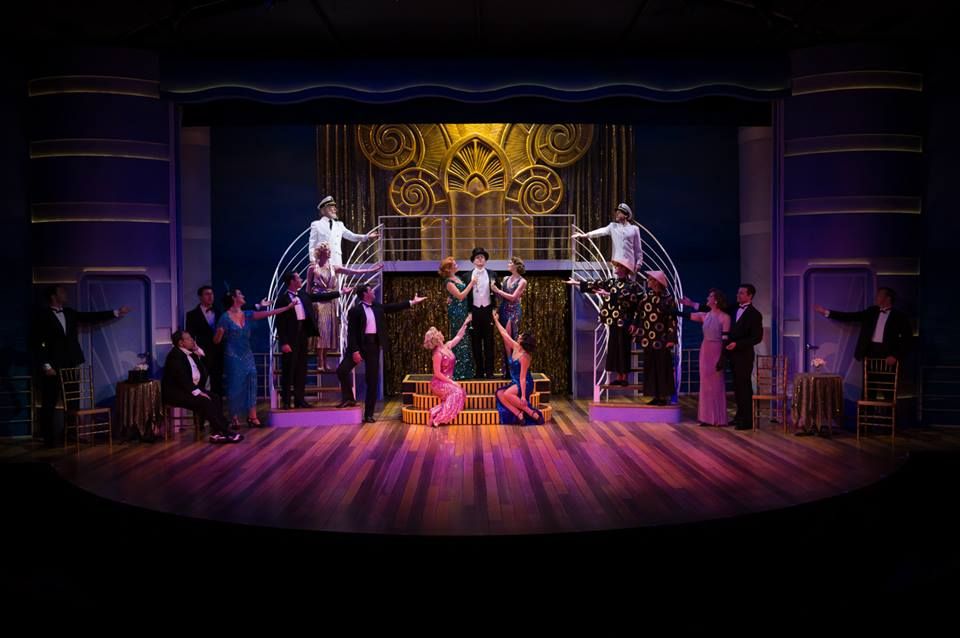 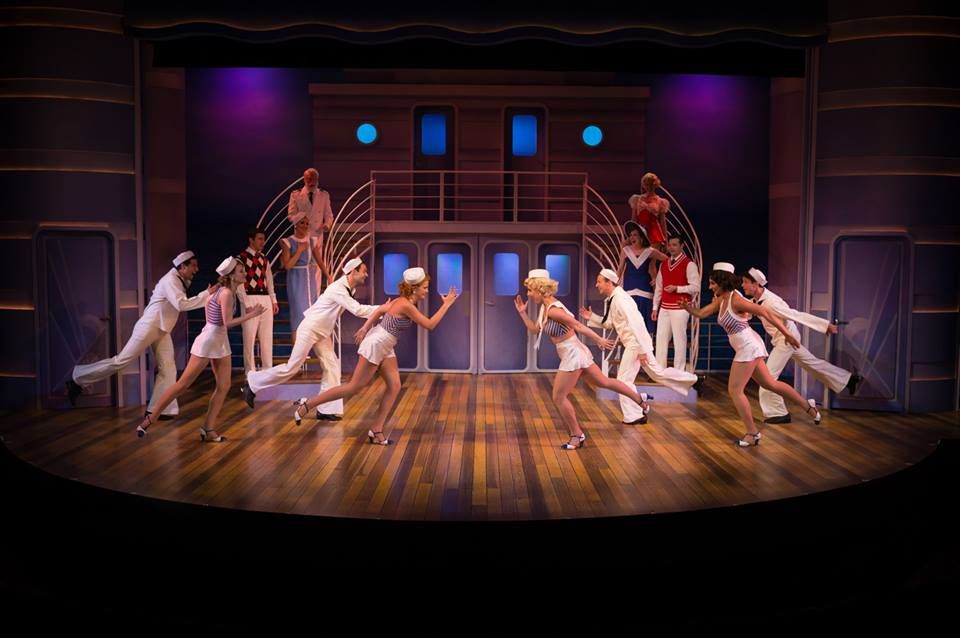 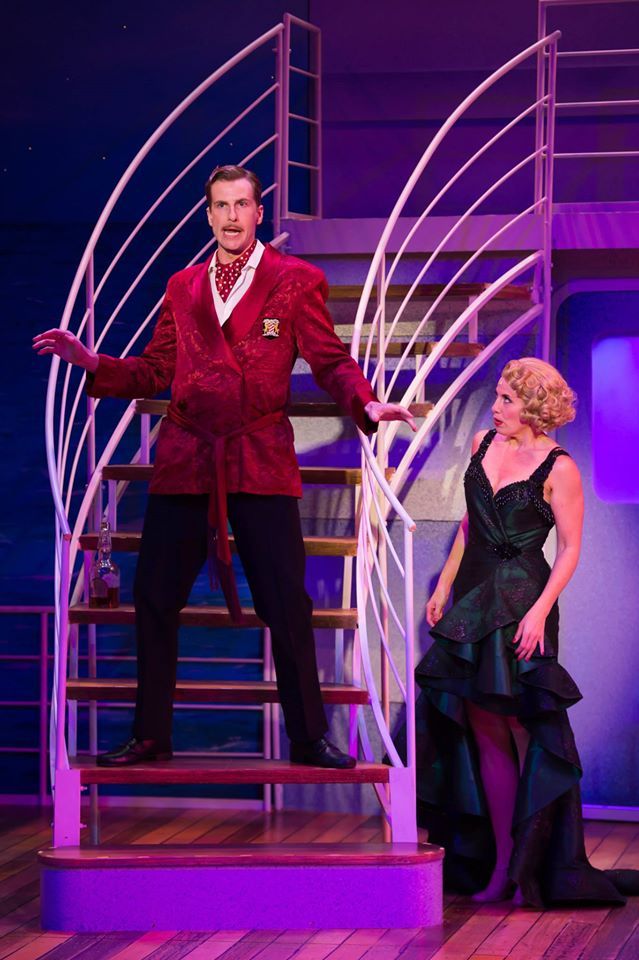 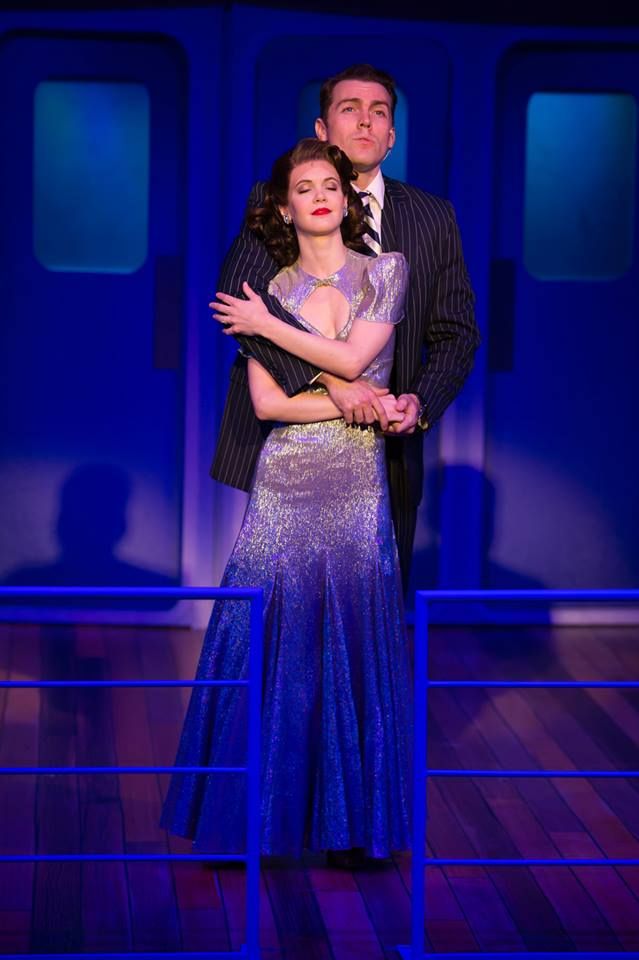 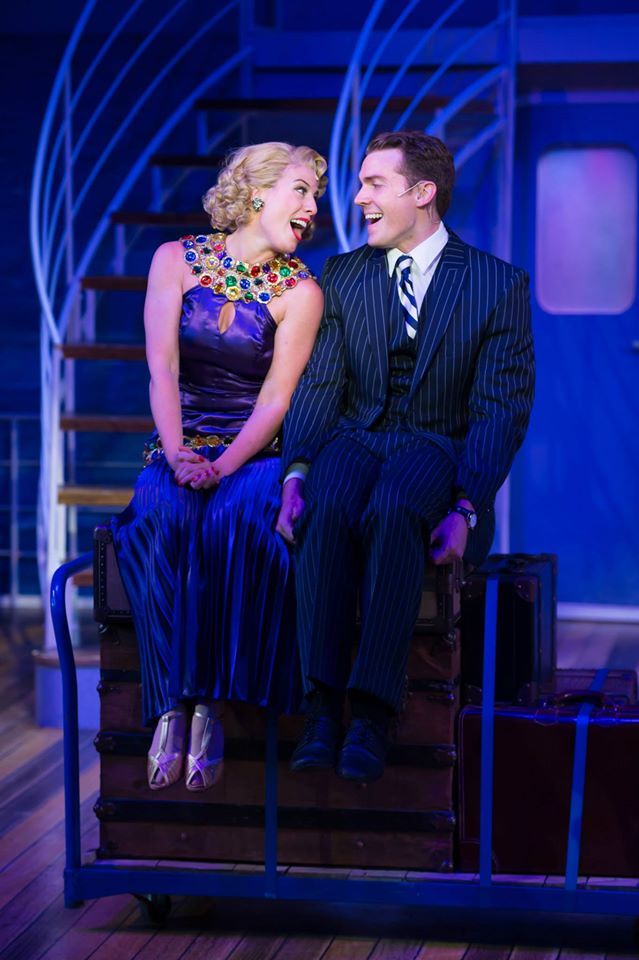 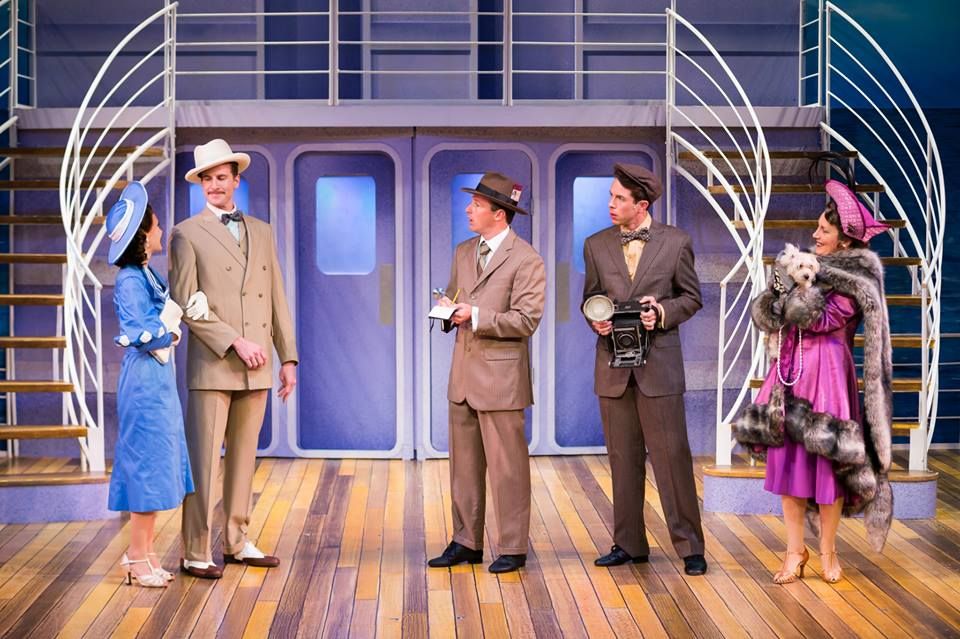 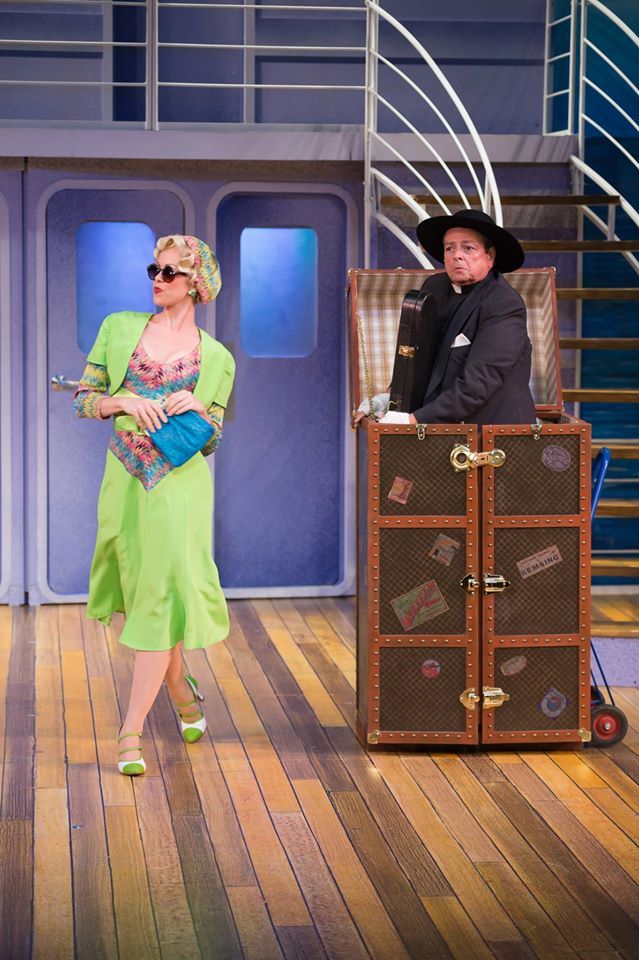 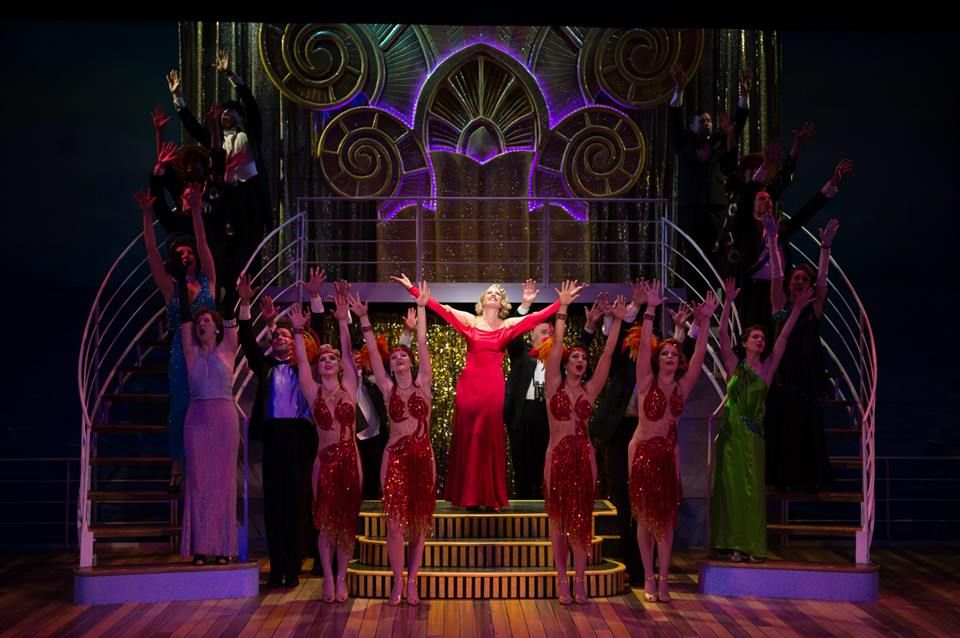 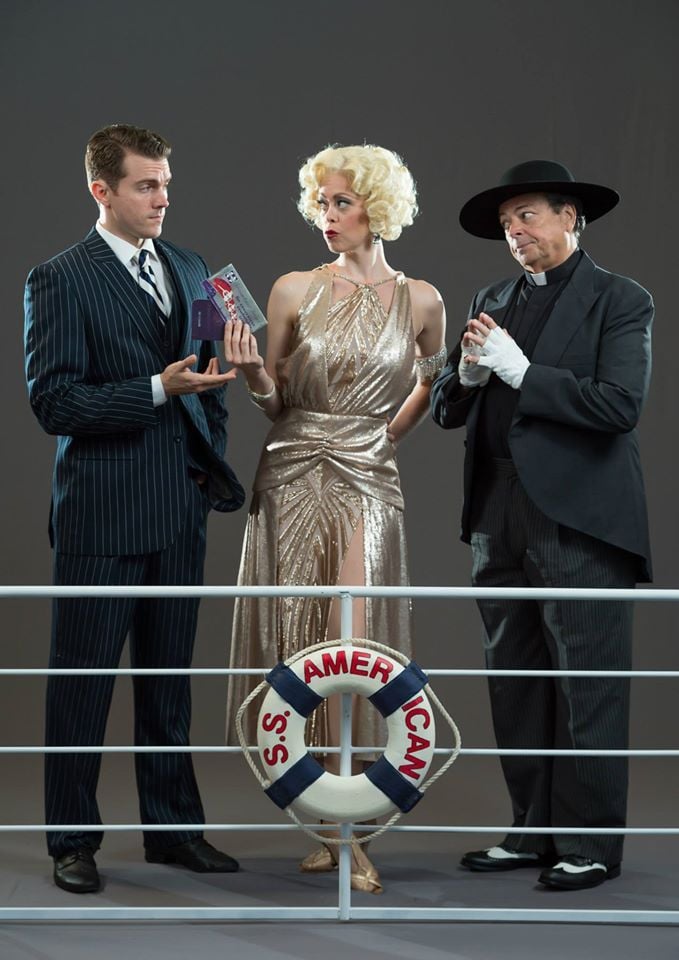 Story: Elisha Whitney is preparing to set sail aboard the S.S. American for a cruise from New York City to England, circa 1934. Before leaving he instructs his young employee, Billy Crocker, to sell off the magnate’s shares of Amalgamated stock, which he’s been tipped will take a dive.

The love-struck Billy, though, is concentrating on stowing away on the American in order to catch up with wealthy young heiress Hope Harcourt. Billy loves Hope, but Hope is engaged to a stuffy but amiable Englishman named Lord Eveyln Oakleigh, which pleases Hope’s mother, Mrs. Evangeline Harcourt, more than it does Hope. Whitney is delighted to learn that the widow, whom he courted 40 years earlier, is taking the same trip.

Assisting Billy as he tries to win Hope’s heart are his long-time pal, evangelist-turned-nightclub-singer Reno Sweeney, who has a thing for Billy, as well as gangster Moonface Martin, aka Public Enemy #13, who is on the lam with his girlfriend Erma.

They disguise stowaway Billy as Snake Eyes Johnson, Public Enemy #1, whom the celebrity-starved captain hears has snuck on board his cruise liner. Billy’s in demand but is Hope among the pursuers?

Highlights: Audiences have delighted in the charms of this musical since it debuted on Broadway in 1934. Music and lyrics by the sophisticated Cole Porter keep the show humming along from one memorable tune to another, and the current production at Stages St. Louis is timeless in its appeal.

Michael Hamilton’s direction is impeccable and his top-notch cast is irrepressible as they sing, dance and frolic across the stage in a presentation that sparkles from the Manhattan bar where it begins to the maritime weddings in the finale. All aboard for a bright and breezy musical cruise!

Other Info: This is the second go-around for Anything Goes at Stages, following its 1992 presentation. The show itself has enjoyed many incarnations since the 1934 debut, adding along the way several Porter tunes not featured in the original. That’s no big deal, since Porter himself was known to borrow from his catalogue of hundreds of tunes to incorporate them in new musicals.

The production being performed at Stages is the 1987 version written by Timothy Crouse & John Weidman, which updated and slightly altered the original book by P.G. Wodehouse & Guy Bolton and Howard Lindsay & Russel Crouse. That 1987 revival received 10 Tony Award nominations and won the Tony for Best Revival of a Musical, as did the 2011 revival based on the 1987 script.

There were other off-Broadway and West End renditions as well as a couple of movie versions, too. The updated script has a freshness and contemporary appeal to it that transcends the setting, and Porter’s music is timeless. Part of the charm, in fact, is catching all of the topical references he makes in his witty lyrics for tunes such as You’re the Top, hearkening to yesteryear celebrities and newsmakers such as Jimmy Durante, Mahatma Gandhi and Fred Astaire.

Hamilton’s direction is seamless as the production maintains a consistently high level of energy and comedy as well as a series of spectacular dance numbers choreographed by Stephen Bourneuf, such as the sizzling tap dancing performed to the title tune for the rousing Act I finale.

Julie Cardia has a rather odd start to her role as Reno Sweeney with a bizarre and not entirely pleasing approach to I Get a Kick Out of You. Subsequently, though, her efforts are terrific as she demonstrates the smooth, appealing voice she only alludes to in the opener. She has fine comic chops, too, and the charisma to carry off the show’s signature role.

Brent Michael Diroma, a late replacement in the role of Billy Crocker, is completely captivating as the earnest and appealing young businessman. He trades clever barbs with Cardia on the debonair You’re the Top number, croons the winsome ballad Easy to Love with flair and is totally ingratiating pairing with the appealing Heidi Giberson as Hope on the infectious It's De-Lovely.

Leading the way in the laughs department are Dan Fenaughty and Bob Amaral as the goofy Lord Evelyn and bumbling Moonface Martin, respectively. The former is highly humorous as Lord Evelyn jots down every example of American slang in his notebook, often with unexpectedly funny results, and shines on The Gypsy in Me, an amusing tango he performs with Cardia that showcases the characters’ quirky attraction to each other.

Amaral shows his skills with slapstick in a number of comedy routines, often in tandem with Laura Taylor as his vapid moll Erma, who is less than impressed with his status as a double-digit criminal on the FBI’s Most Wanted list. Taylor hams it up effectively popping gum and seducing smitten sailors throughout.

Local performers Whit Reichert, Kari Ely and John Flack are entertaining as the nearsighted Whitney, status-conscious Mrs. Harcourt and nervous captain, respectively. As the ship’s purser, Brennan Caldwell nearly steals the show from this prestigious cast with his hilarious portrayal of a naval underling as tense as a violin string, highlighted by priceless facial expressions.

The madcap action takes place on James Wolk’s wonderful scenic design that offers a convincing frontal view of a luxury liner, lit in spectacular fashion by Sean Savoie in a rainbow of hues. Everyone looks elegant in Brad Musgrove’s stunning costumes, while musical director Lisa Campbell Albert makes the most of Stuart Elmore’s lush and lavish orchestral design.

For an evening of non-stop musical and comic delight, purchase a ticket aboard the S.S. American, where Anything Goes in high-kickin’, smooth-sailin’ fashion.