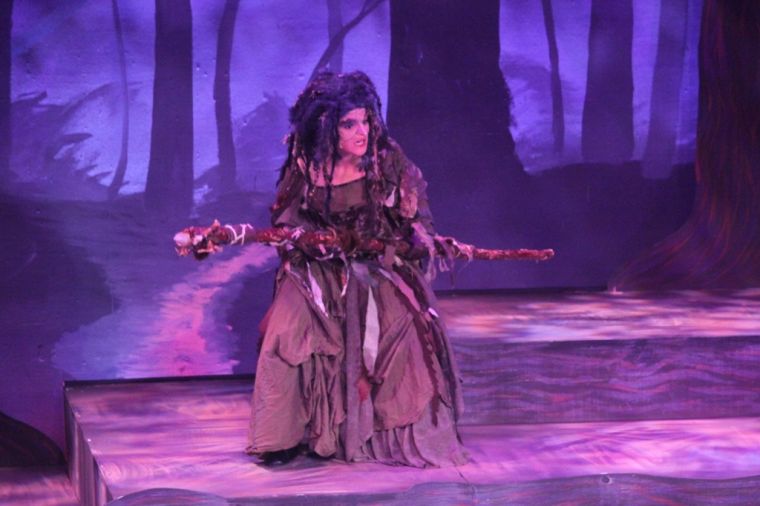 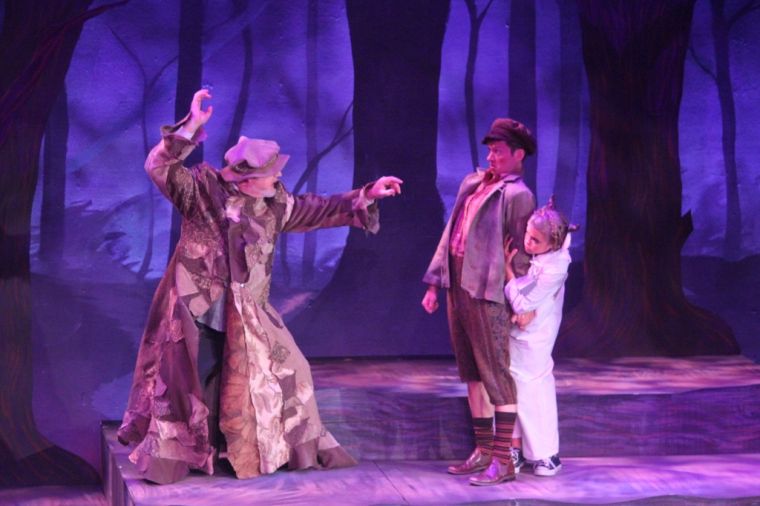 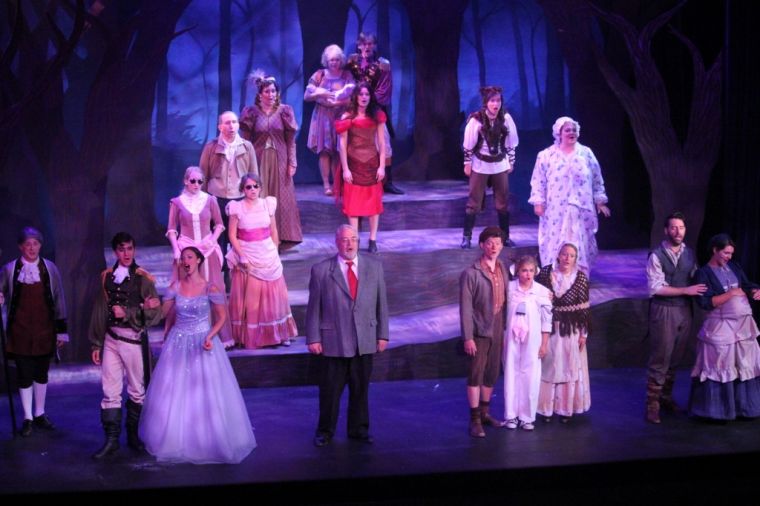 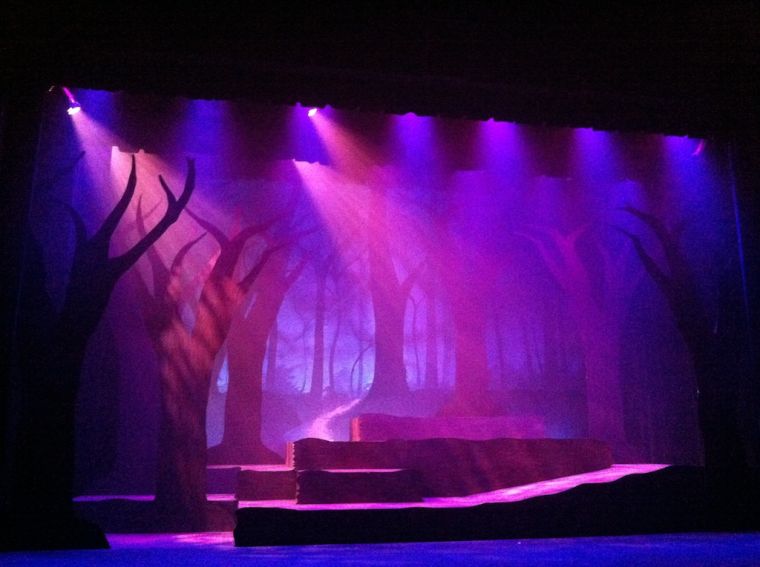 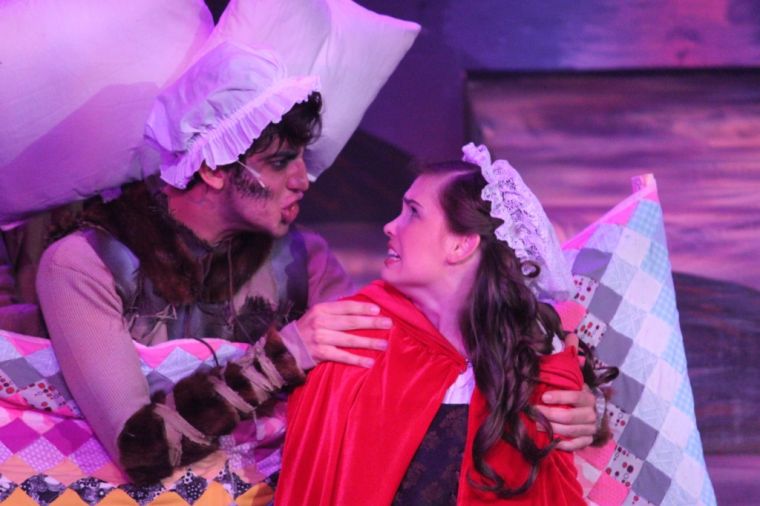 Story: Set “Once Upon a Time, in a Far-Off Kingdom,” a cluster of fairy tale characters profess their hopes and desires as relayed by a genial narrator. There’s Jack, whose mother wants him to sell his beloved but dry cow, Milky White, while she still commands a reasonable price. Cinderella, a lowly maid put upon by her demanding stepmother and imperious stepsisters, dreams of attending the royal ball at the prince’s palace. Little Red Riding Hood is eagerly looking forward to a visit to her grandmother’s house in the woods, while a baker and his wife lament they have no children.

Their neighbor, an aged witch, explains the couple is barren because of a curse she had placed on the baker’s father in revenge for ‘magic’ beans he stole from her garden. She promises a child to the baker and his wife if they find four items she covets, even as the witch keeps Rapunzel, whom she took from the baker’s father and raised as her own, imprisoned with her flowing locks in a tower.

While a mysterious man in the woods helps the baker, Jack is duped into selling his cow for ‘magic’ beans that are thrown into a field by his mother and then grow into a beanstalk that reaches into the sky. Jack finds gold in a giant’s home above the beanstalk, Cinderella is found by the handsome prince who marries her, Little Red Riding Hood and her grandmother are rescued by the baker from a carnivorous wolf and a child is born to the baker and his wife.

Alas, though, what was to be ‘happily ever after’ becomes instead a series of unforeseen challenges and nightmares for the folks who have ventured ‘into the woods.’

Highlights: Ozark Actors Theatre’s foray into the complex musical realm of Stephen Sondheim proves to be a satisfactory adventure under the watchful guidance of producing artistic director Jason Cannon. With a large cast that ranges from adequate to superior, OAT’s rendition of Into the Woods is an engaging and appealing expedition both for Sondheim aficionados and for novices getting their first taste of the master’s musical genius.

Other Info: Sondheim won a Tony Award for best score and his collaborator James Lapine garnered a Tony for best book for their 1987 effort. It’s a beguiling tale that delves into the lives of famous characters from Brothers Grimm fairy tales beyond the ‘happily ever after’ conclusions, with sobering and often tragic consequences for their well-known actions. The tale of the baker and his wife was a new yarn spun by Lapine that ties together the more familiar tales in clever fashion, as is the addition of a glib narrator.

Kevin Shaw’s scenic design features a large book cover with the words “I Wish” at stage right and an impressive background mural of a forest that offers the illusion of depth for the woods, as well as using far stage right for Rapunzel’s castle prison. Shaw is equally adept at utilizing his lighting design to set the mood for any number of scenes featuring the myriad characters, enhanced by Katherine Guzzi’s atmospheric sound design.

Standout performances are showcased by Brittany Proia, Blane Pressler, Natalie Sannes and Sabra Sellers. Proia’s beautiful voice brings resonance and clarity to her role as the baker’s wife. There’s considerable chemistry as well between her and Pressler as the well-meaning baker, whose commitment to a cause often comes at the expense of his too often ignored wife. Pressler conveys both the passion and stubbornness of the baker in a performance that grounds him in reality, albeit in a fairy-tale setting.

Gregory Cuellar is comically cunning as the voracious wolf as well as the thick-witted Prince Charming, while Benjamin Wegner proves equally daft as his royal brother on a slapstick quest to wed Rapunzel. Kelly Campbell is fine as the witch, especially in the first act, when her singing isn’t put to as stringent a test as in Act II.

Lanin Thomasma has a grand time as the genial narrator and also as the ‘mysterious man’ cavorting in the woods, keeping the audience regaled until he’s commandeered by the characters. Michael Detmer is affecting as Jack, who is forced to grow up quickly by the tragedy he brings to bear, and Rebecca White is his faithful cow, Milky White.

While the singing is sometimes merely adequate and some of the acting perfunctory, on the whole Ozark Actors Theatre’s ambitious attempt at tackling the fascinating but challenging music and lyrics of Stephen Sondheim is an engaging excursion Into the Woods.

Play: Into the Woods