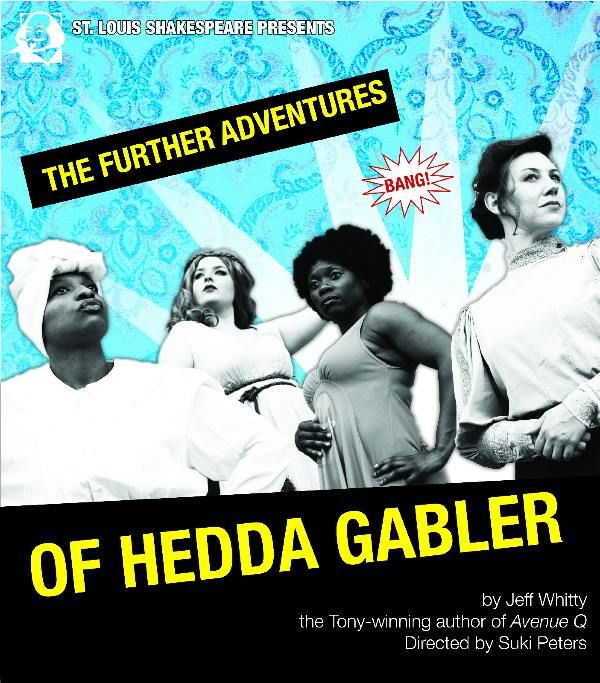 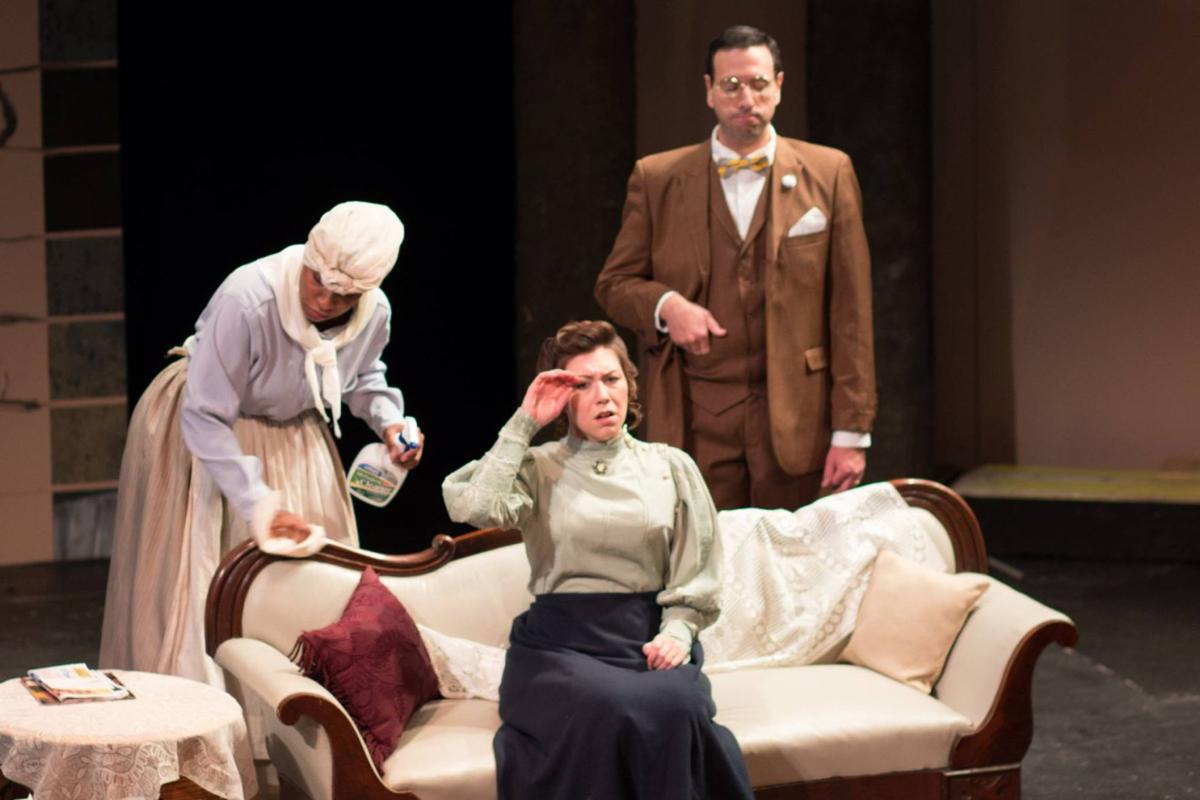 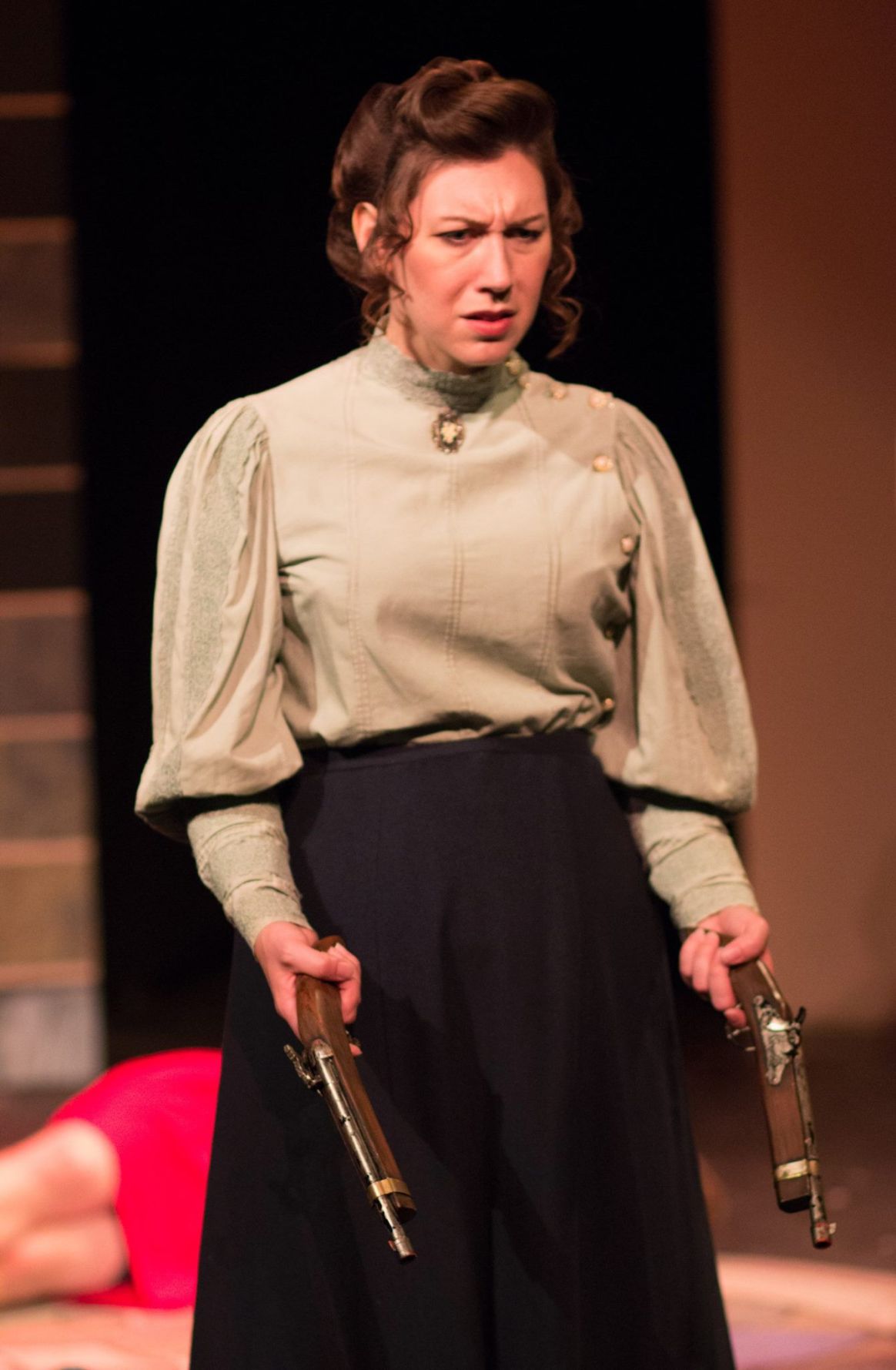 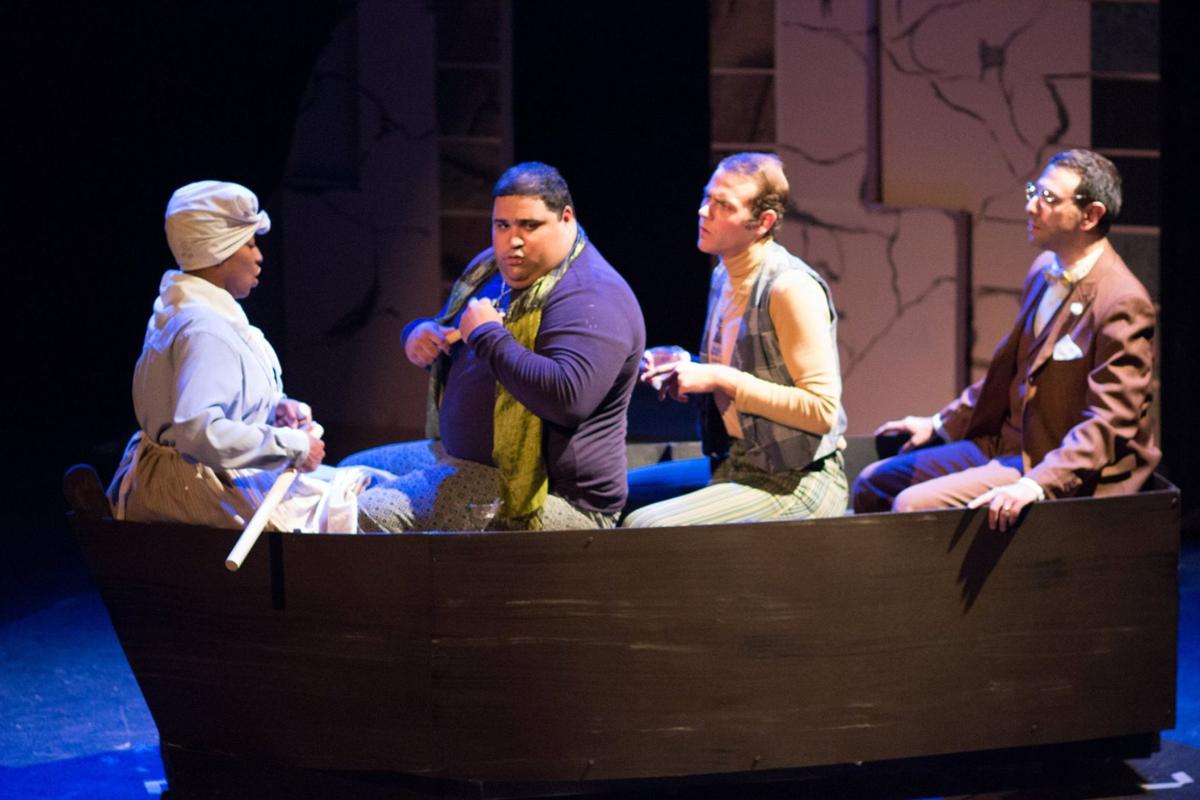 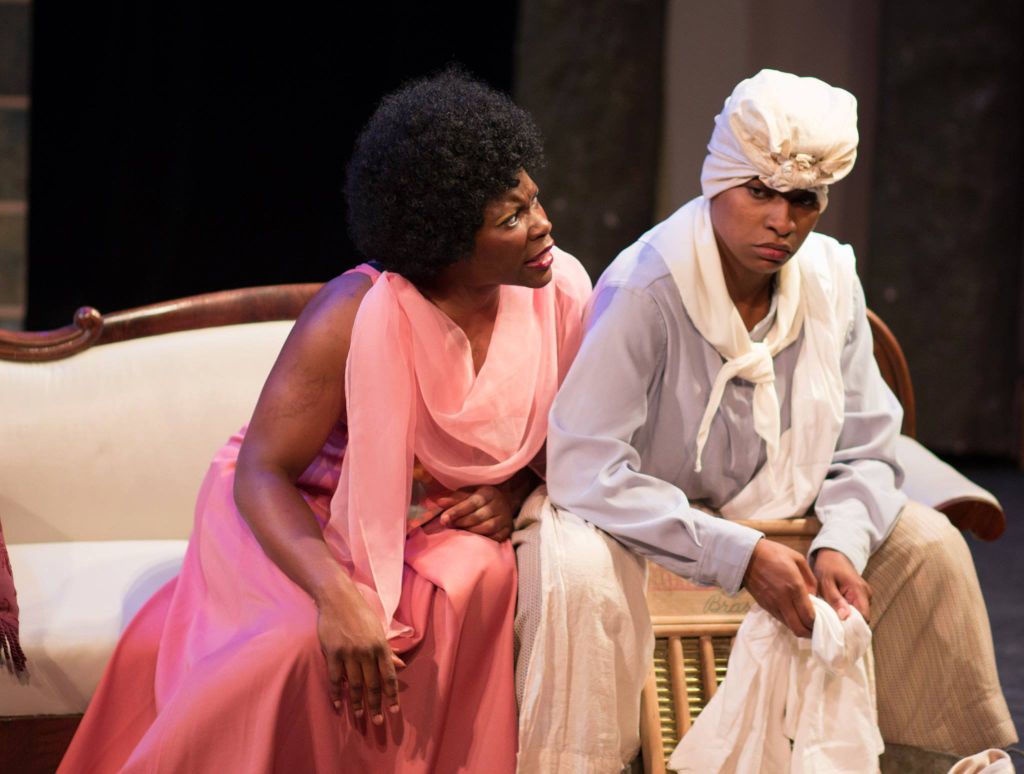 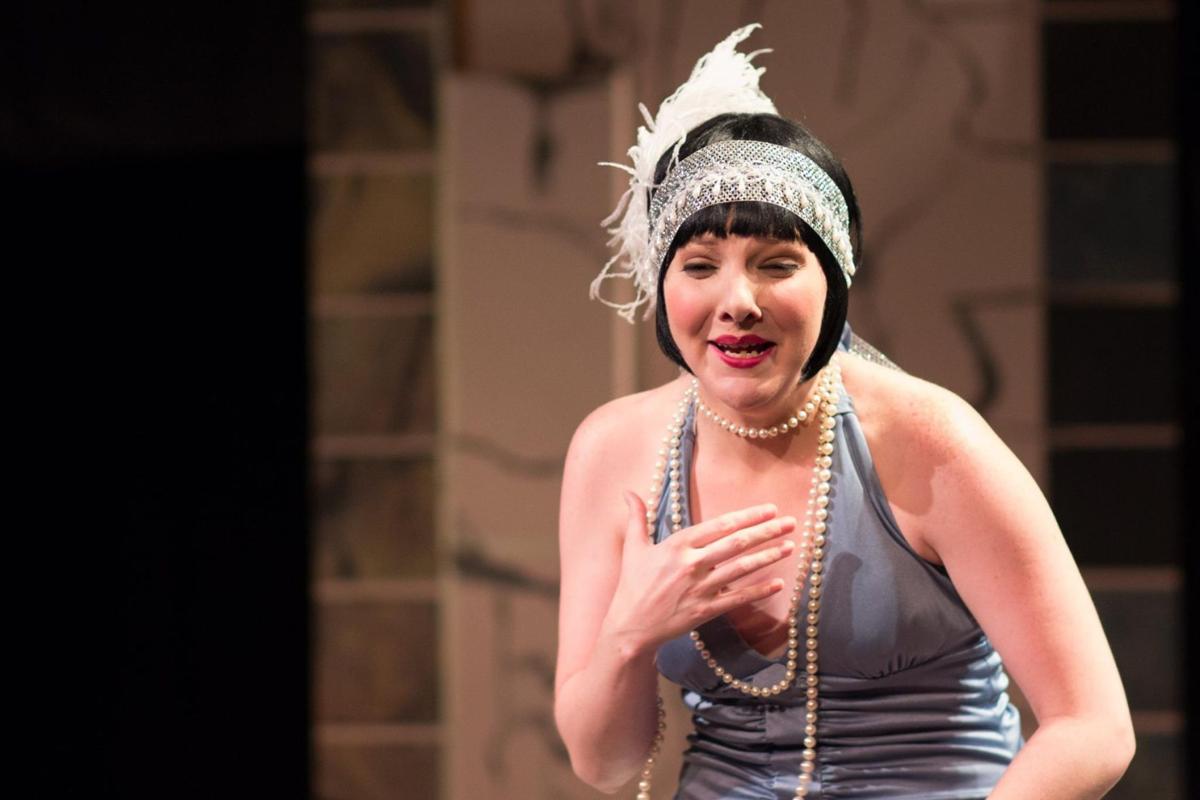 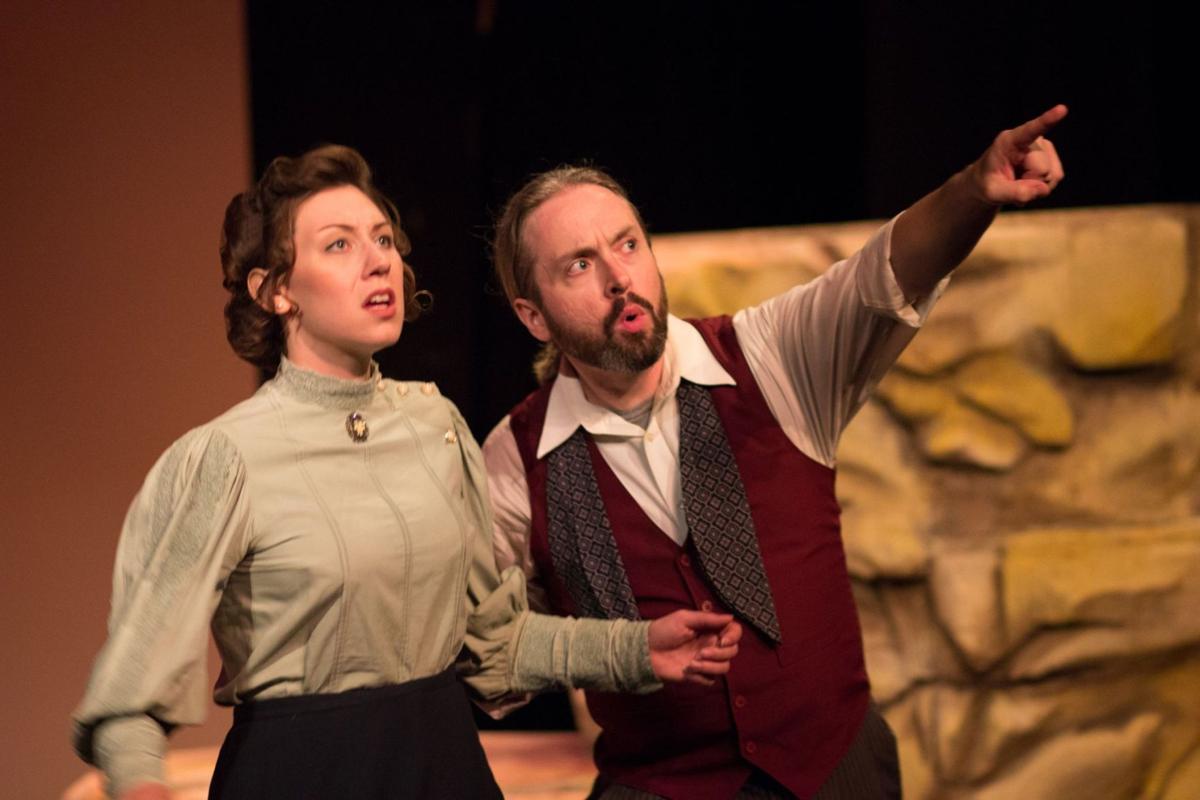 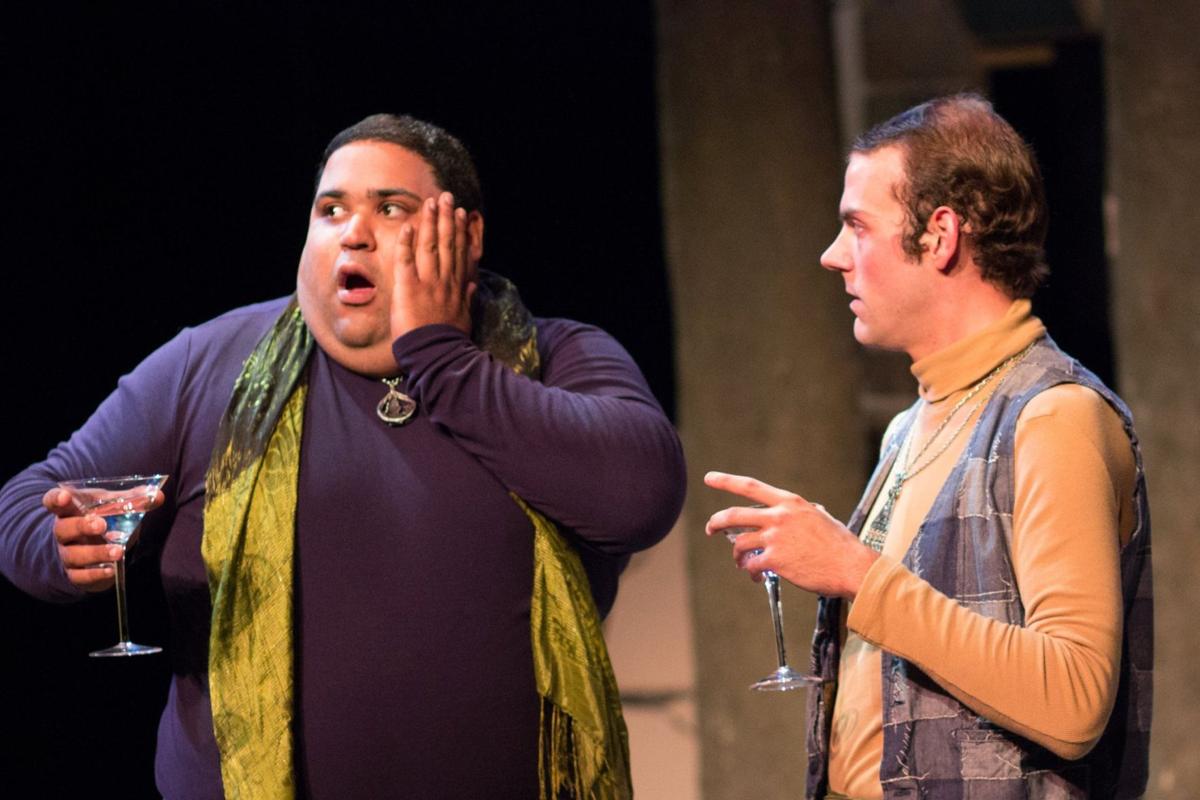 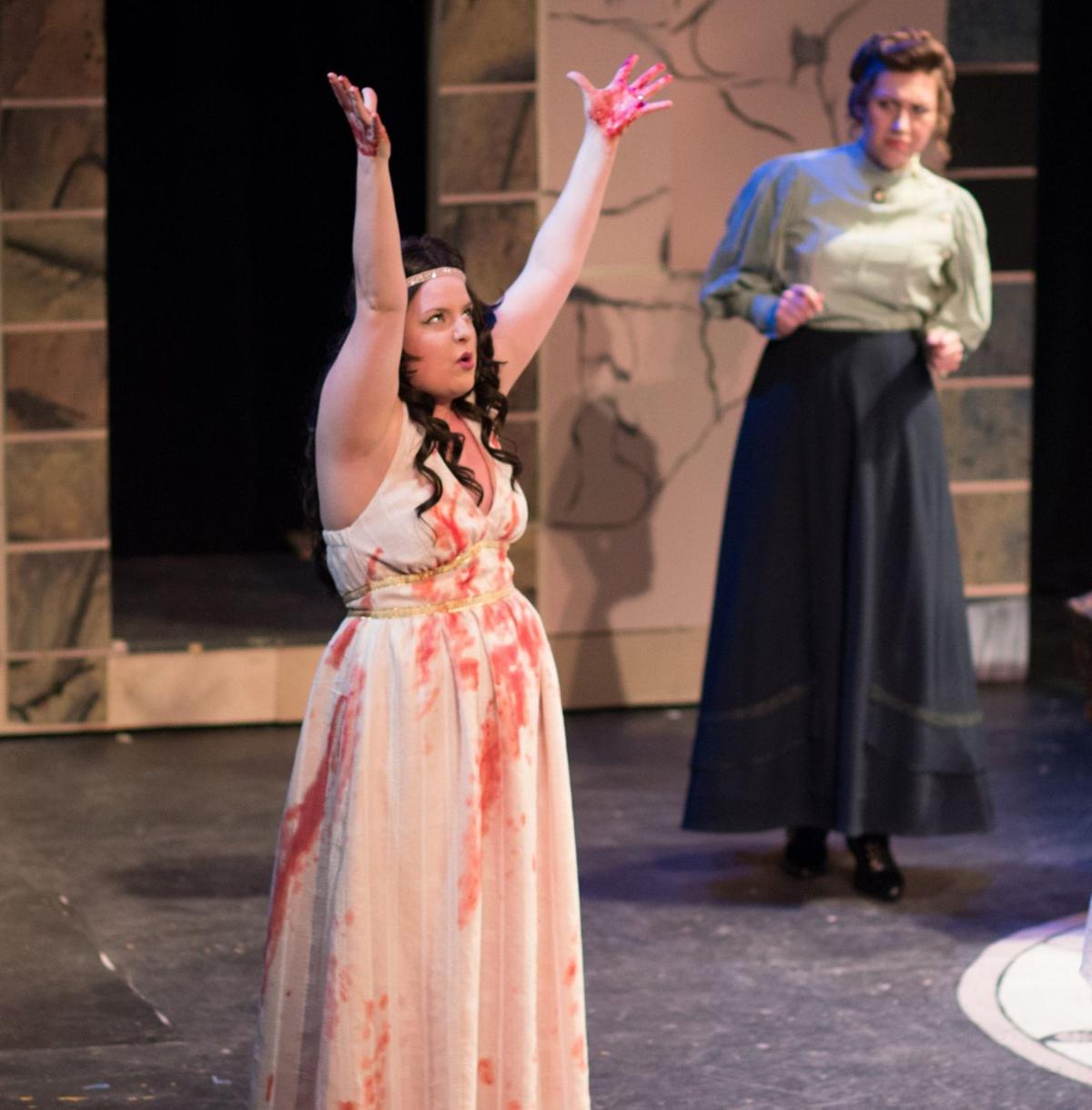 Story: Voices in the background sound familiar: It’s the final scene of Hedda Gabler, and after some dialogue we hear the fatal gunshot which indicates the heroine has taken her own life.

After a pause, Hedda arrives on stage and finds herself in the world beyond her 19th century setting. She’s in some strange place where Mammy, the famous domestic black stereotype from Gone With the Wind, is busy cleaning and cooking and keeping everything in order. Apparently she is Hedda’s maid and cook, something Hedda and her husband George Tesman take for granted.

Hedda seems surprised that she is no longer dead, although George has a more nervous reaction. He informs her that she has arrived at this point many times before, kills herself again and thus repeats the cycle. At times George even seems oddly comfortable with this.

As she ponders where she is and what will become of her, Hedda learns from other characters such as the tragic Greek character Medea, two flamboyantly gay men named Patrick and Steven and even Eilert Lovborg, who was in love with Hedda in playwright Henrik Ibsen’s drama, that all of them come from something known as “The Furnace,” where their writer creators concocted them and their stories.

Eventually Hedda, Mammy and some of the others determine to shape their own fates beyond their written origins. But will their brave new world be any happier?

Highlights: St. Louis Shakespeare kicks off its 31st season, and the first under artistic director Suki Peters, with this two-act work by Jeff Whitty, who won a Tony Award in 2004 for Best Book of a Musical for Avenue Q.

It’s the type of wacky, off-kilter comedy with which the troupe has filled the non-Will portion of its catalogue in previous seasons with considerable success. For the most part, The Further Adventures of Hedda Gabler fits this category, offering an intriguing and often fitfully funny production that is as daffy as it is different.

Other Info: Whitty’s witty piece seems highly derivative of another work, Eric Overmyer’s On the Verge or The Geography of Learning, as well as bringing to mind films such as Adaptation and Being John Malkovich. There’s a whimsical aspect to fictional characters searching for their ‘inner selves’ and fulfillment, but in many ways it feels like we’ve been down this road before, thus lessening the novelty.

Whitty’s reference to artistic creativity as a “furnace” is both appealing in its concept and frightening to his characters, who venture into the unknown in most cases with trepidation. What his theme lacks in originality is compensated in this St. Louis Shakespeare production by some clever handling of set changes and by some funny character interpretations by director Suki Peters’ enthusiastic cast.

Most engaging is Jeanitta Perkins as the domestic with the wincingly painful moniker of Mammy. Perkins delivers her dialogue of the uneducated servant with a sharp focus on its stereotyped patter while also filling the character with the common sense that the ‘elegant set’ lacks. Watching her character develop is one of the highlights of the story.

There are also a pair of wonderfully wry, arch performances by Carl Overly Jr. and Maxwell Knocke as two gay men out of some late 1960s or early ‘70s story such as Staircase or The Boys in the Band (not really sure exactly which), who sashay and cavort in carefree fashion. They’re enthralled to meet the ‘real’ Hedda Gabler and Mammy and join them on their excursion into the unknown, with plenty of alcohol and fashion accoutrements to fuel the journey.

Emily Baker maintains a consistently confused element to her title character, acting effectively as the dramatic heroine in the original play while also searching for fulfillment and self-realization beyond the conclusion of Ibsen’s seminal drama. If clever costume designer JC Krajicek outfitted her with a pith helmet, she’d be right at home with the focal characters of On the Verge.

There’s amusing work by Dave Cooperstein as Hedda’s nervous husband George, especially when he’s furtively observing the antics of homosexuals far from the safety of his ‘straight,’19th century Nordic locale or clumsily attempting to get Hedda to kill herself again and again.

Ben Ritchie brings a suavely suspicious reading to the devious Eilert Lovborg. He’s particularly entertaining, when Hedda stumbles upon a modern production of ‘her’ play, as a stiff, awkward and amusing version of Eilert while Cooperstein does a Monty Python take on a stomach-scratching, oafish Judge Brack.

Rounding out the cast are Lindsay Gingrich as a blood-soaked and indifferent Medea and Patience Davis as a modern woman in too much of a hurry for 19th century melodramatics, with both also conveying a bevy of other small roles. Katie Robinson and Ted Drury double as zany extras, such as a Roaring 20s flapper and a Godspell Jesus, respectively, while also donning sundry silly costumes as they change the sets.

Peters, always adept at mining comedy in unlikely or untraditional places, keeps everyone in willfully wacky mode, occasionally sending her performers into the audience to accentuate the absurdity. She has a knack for finding the attraction of the offbeat, whether in the play itself or around its edges as exemplified here.

Jason Townes’ set design is an interesting blend of offbeat background pieces and furniture in the foreground that integrates Linda Lawson’s amusing props, while Jeff Roberts’ sound design customarily adds tunes, usually merry in nature, that match the mood of the moment.

Eventually, The Further Adventures of Hedda Gabler runs out of steam as well as suffering in comparison to the aforementioned pieces. Watching Peters’ inspired performers run amok in Whitty’s story, however, makes this a generally entertaining excursion.