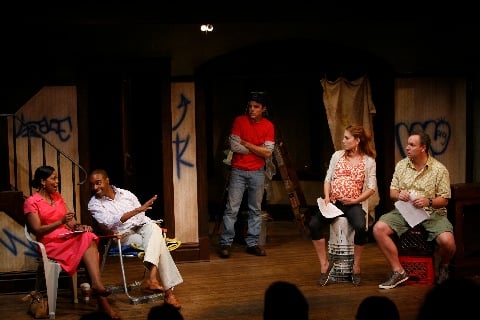 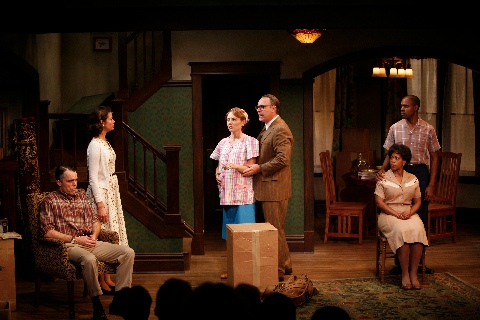 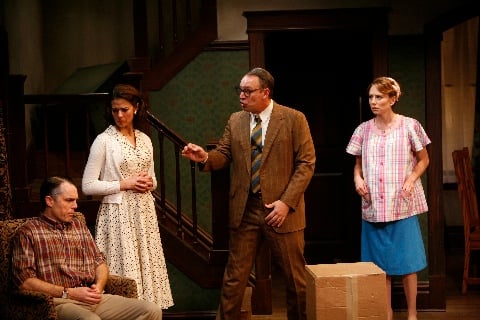 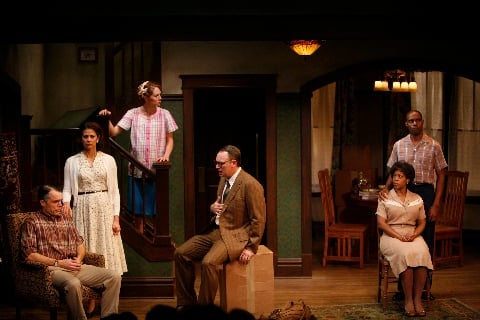 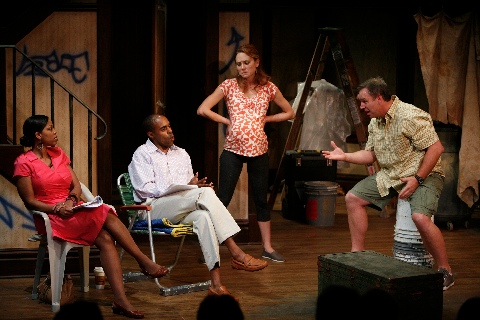 Story: Chicago’s Clybourne Park neighborhood in 1959 is a fine place to live. But there’s a caveat: You can live there if you look like its white residents. When Russ and Bev put their modest, three-bedroom bungalow up for sale, they’re visited soon after by Russ’ former Rotary pal Karl. As president of the neighborhood association, Karl at first nervously asks the couple to reconsider their sale.

It turns out that a black family named Younger has purchased the home from the realtor. While Russ and Bev weren’t really aware of that, it doesn’t change their decision, which prompts Karl to change from nervous to threatening. The all-white neighborhood, he says, won’t tolerate the presence of a black family.

In Act II, fast forward to 2009, where the same brick bungalow is a shabby shadow of its former tidy existence. A young white couple has purchased the property as ‘gentrification’ has caught their fancy. They want to make significant changes to the house, but the local community insists that their home adhere to the look of the community, which now is black. While half a century has passed, the era of ‘political correctness’ can’t disguise growing hostility between the new residents and representatives of the neighborhood. Will the circle be unbroken?

Highlights: Clybourne Park is a remarkable drama, even if The Rep mistakenly refers to it as a comedy. While it certainly has its share of comic moments -- mostly at the expense of various characters -- at its heart it is an aching and searing portrayal of America’s lingering dilemma about race. The indelible stain of two and a half centuries of slavery followed by more than a century of discrimination, hatred and violence against an entire ethnic group cannot be washed away in a decade or so.

What makes this multiple award-winning piece by Bruce Norris stand out, however, is a remarkable foundation built on a specific human story that is introduced in Act I and then brilliantly concluded in the stunning climax to Act II. While the subject of race can be addressed endlessly from the anti-septic corridors of academia to the soiled residue of a corner bar, Russ and Bev’s story is the real bricks and mortar of this provocative and poignant tale.

Other Info: Norris’ drama was inspired by playwright Lorraine Hansberry’s landmark effort, A Raisin in the Sun, which detailed the efforts of the black Younger family in 1959 to move out of a cramped apartment building in inner Chicago to a house in a working-class neighborhood called Clybourne Park. Hansberry’s drama in turn recalled her own father’s law suit to keep his family in a home purchased in the 1930s in Chicago’s Washington Park area over the objections of its white residents.

Clybourne Park ran Off-Broadway for just one month in 2010, opened another production in London’s West End later that year and had a 16-week, limited engagement earlier this year on Broadway.

It’s doubtful that any of those productions was better than the masterful effort guided by director Timothy Near as the opening of The Rep’s 2012-13 Studio Theatre season. Unlike the uneven presentation Near oversaw earlier this season of David Mamet’s play, Race, on The Rep’s Mainstage, this two-act work sizzles and crackles throughout with caustic social commentary that stunningly shows the differences as well as similarities in American culture spanning half a century.

Superior performances abound from the stellar septet of players nurtured by Near. The show’s singularly most powerful moment, though, stoically positions six of those performers staring in silence across the stage while the seventh weeps inconsolably behind the set. It is a revelatory scene that will linger in your memory as vitally as Bev’s achingly perceptive comment, “I am ashamed of every one of us.”

Nancy Bell is powerfully persuasive as Bev, a ditzy, ‘50s homemaker who surprises us eventually with her observations and inner strength in the face of crushing personal tragedy. Mark Anderson Phillips is a Rubik’s Cube puzzle as her husband Russ, whose quirky manner slowly reveals a man desperate to find solace as his world has crashed around him. Eric Gilde completes the tortured nuclear family as their war veteran son Kenneth, whose spirit lingers amidst the ruination of the house in the 21st century.

Chauncy Thomas is magnificent as Albert, the good-natured husband of the couple’s maid, Francine (although it’s hard to imagine them having domestic help in their working-class abode), desperately trying to remain polite in increasingly tense moments. Tanesha Gary complements him with a strong performance as the ever-patient Francine.

Michael James Reed is up to the thankless task of portraying the two ‘villains’ in the piece, the cowardly Karl in the first act and thick-headed new neighbor Steve in the latter. Shanara Gabrielle does expert work as Karl’s deaf and pregnant wife Betsy and returns in the second act as pregnant newcomer Lindsey.

That second act also features Bell as a self-absorbed lawyer, Phillips as a raucous repairman, Thomas and Gary as emissaries from the gentrified neighborhood and Gilde as the new couple’s architect as well as an oafish minister in the first act. Each of them reveals fissures in their personalities that open like gaping wounds when the veneer of their civility is casually stripped away. Ugliness up close and personal leaves no survivors.

All of this plays out on a striking set designed by Scott Neale which showcases the modest comfort of the home in the ‘50s, with wooden blinds and strong, sturdy accoutrements that transform shockingly into the rundown, decrepit remnants of the structure 50 years later. Tom Haverkamp’s sound design references poet John Donne’s haunting reminder that the “bell tolls… for thee,” while Ann Wrightson’s lighting enhances the mood on stage. Lou Bird’s costuming smartly reflects the misleading Pleasantville look in the first stanza with the yuppie attire prevalent in the second.

Clybourne Park’s run was extended by The Rep an additional week before it even debuted in the Studio Theatre because of huge ticket demand. Grab a seat if you can find one for this superior example of insightful writing and crystal clear interpretation that will grab your heart and soul in an iron vise.