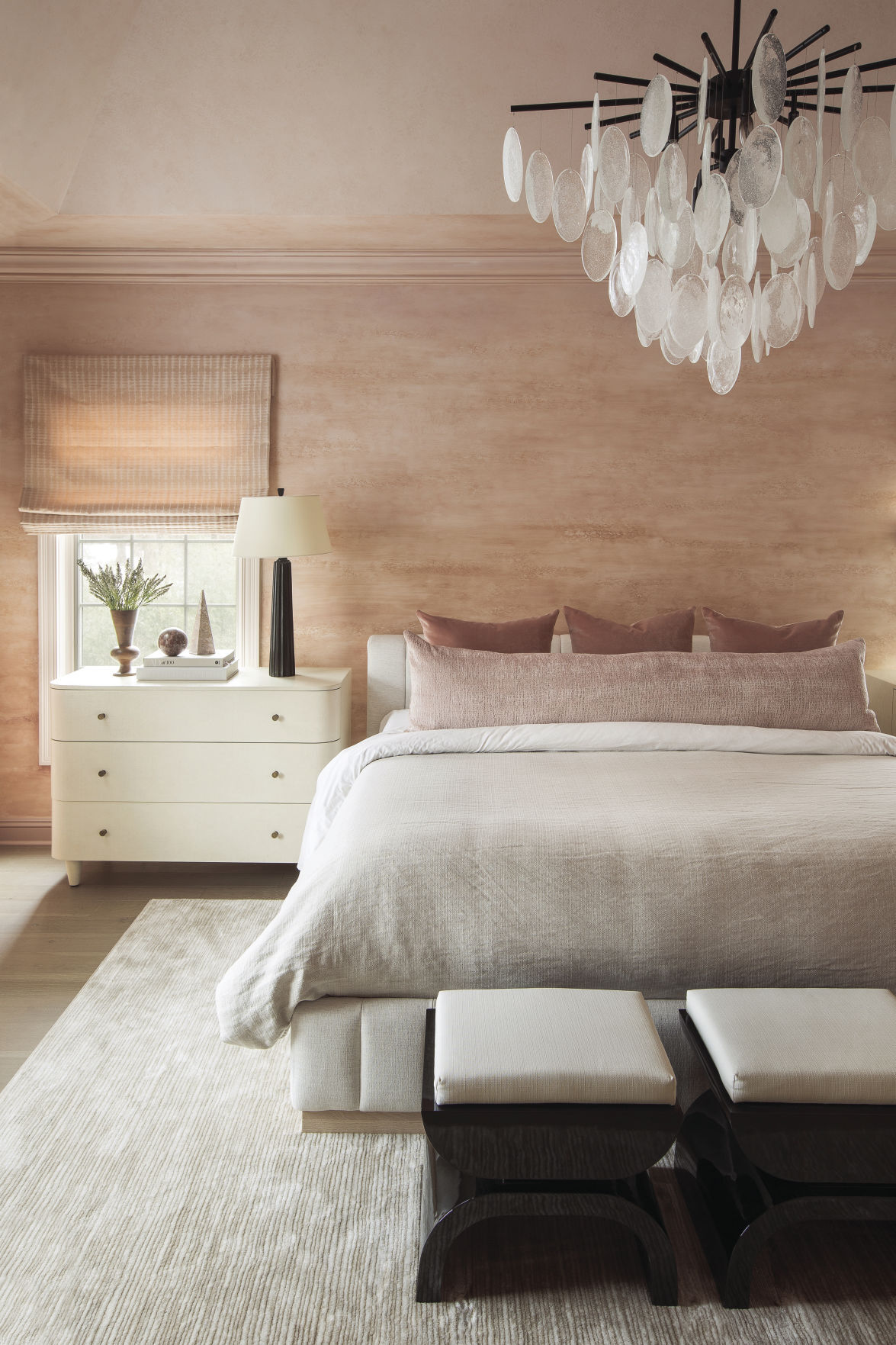 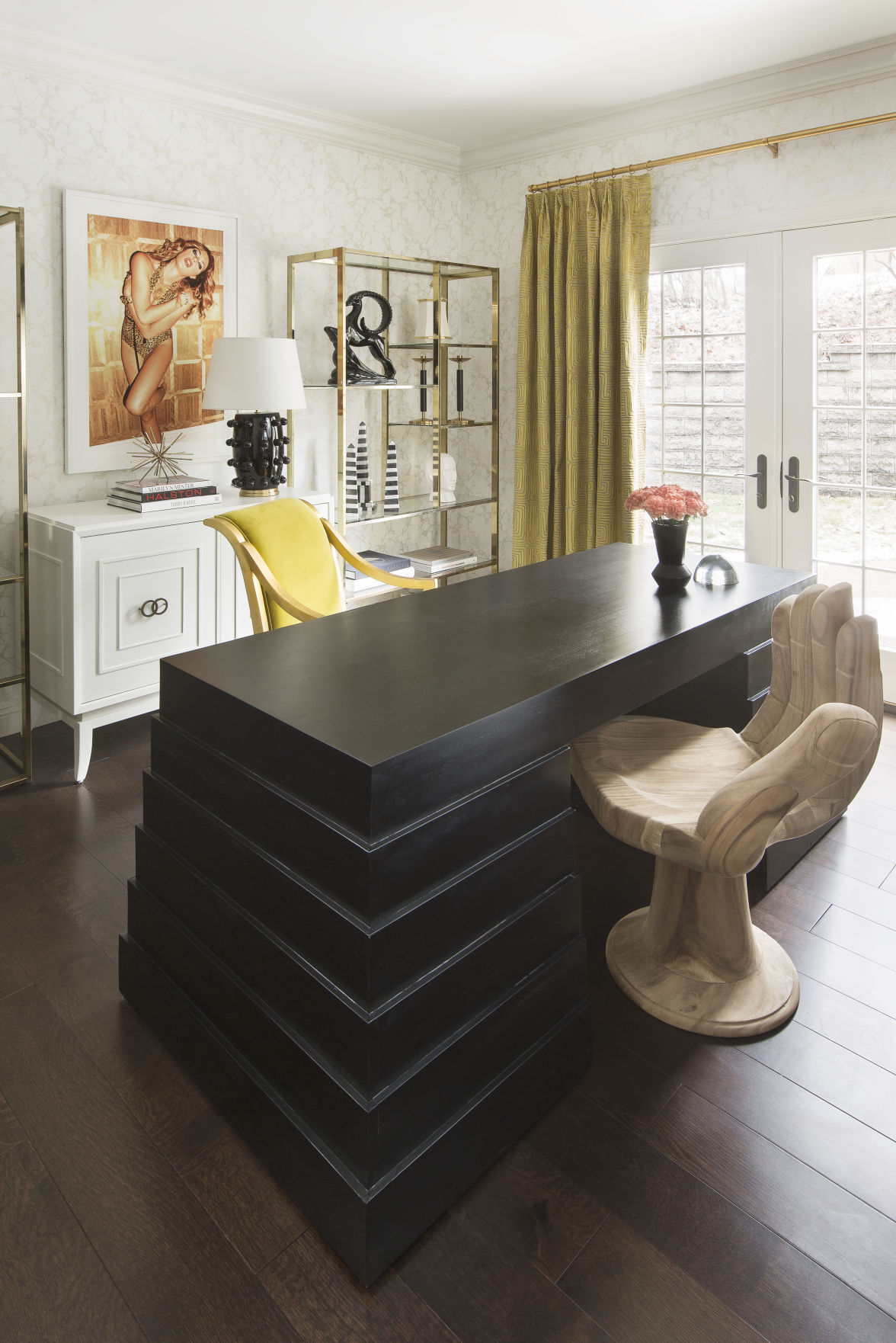 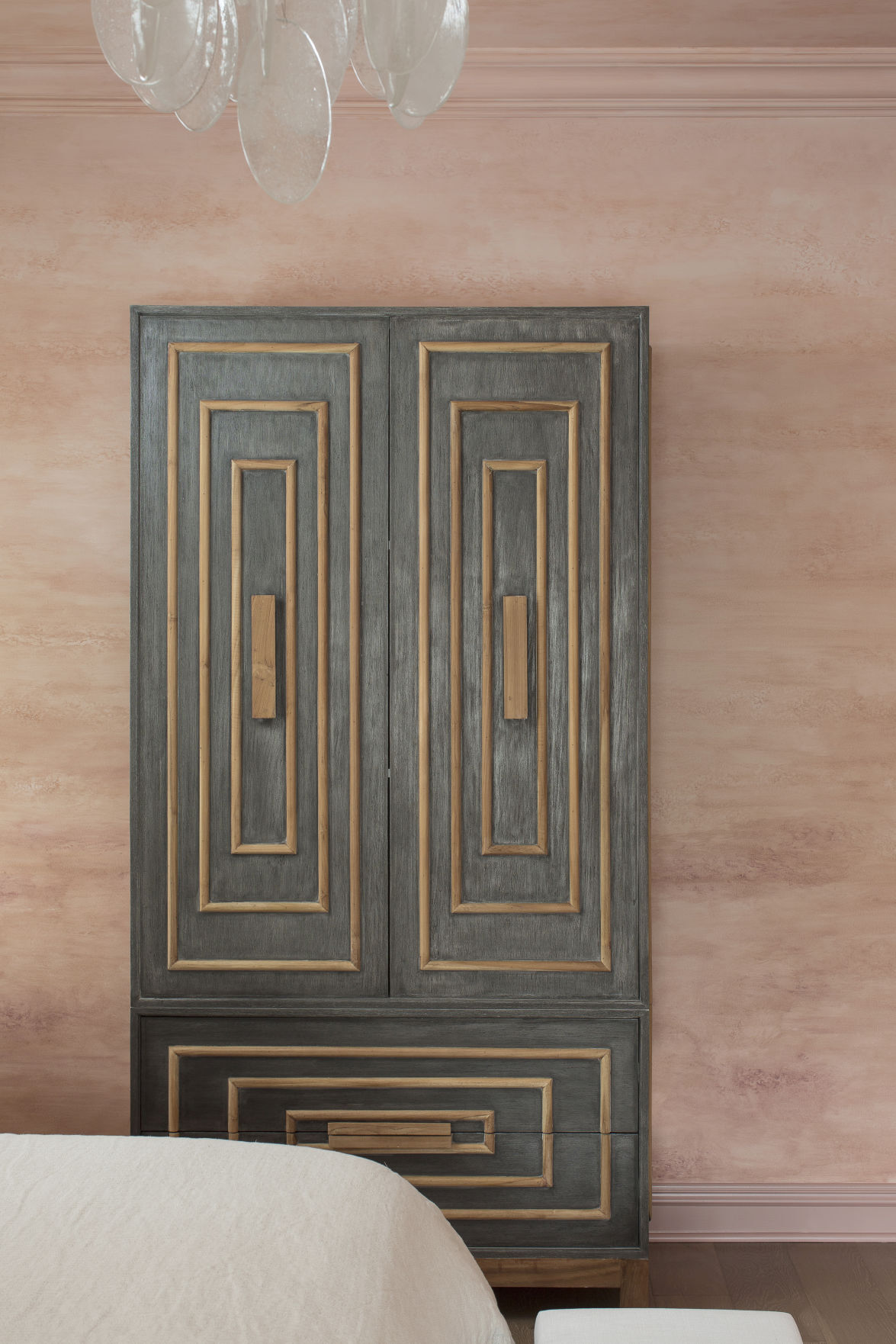 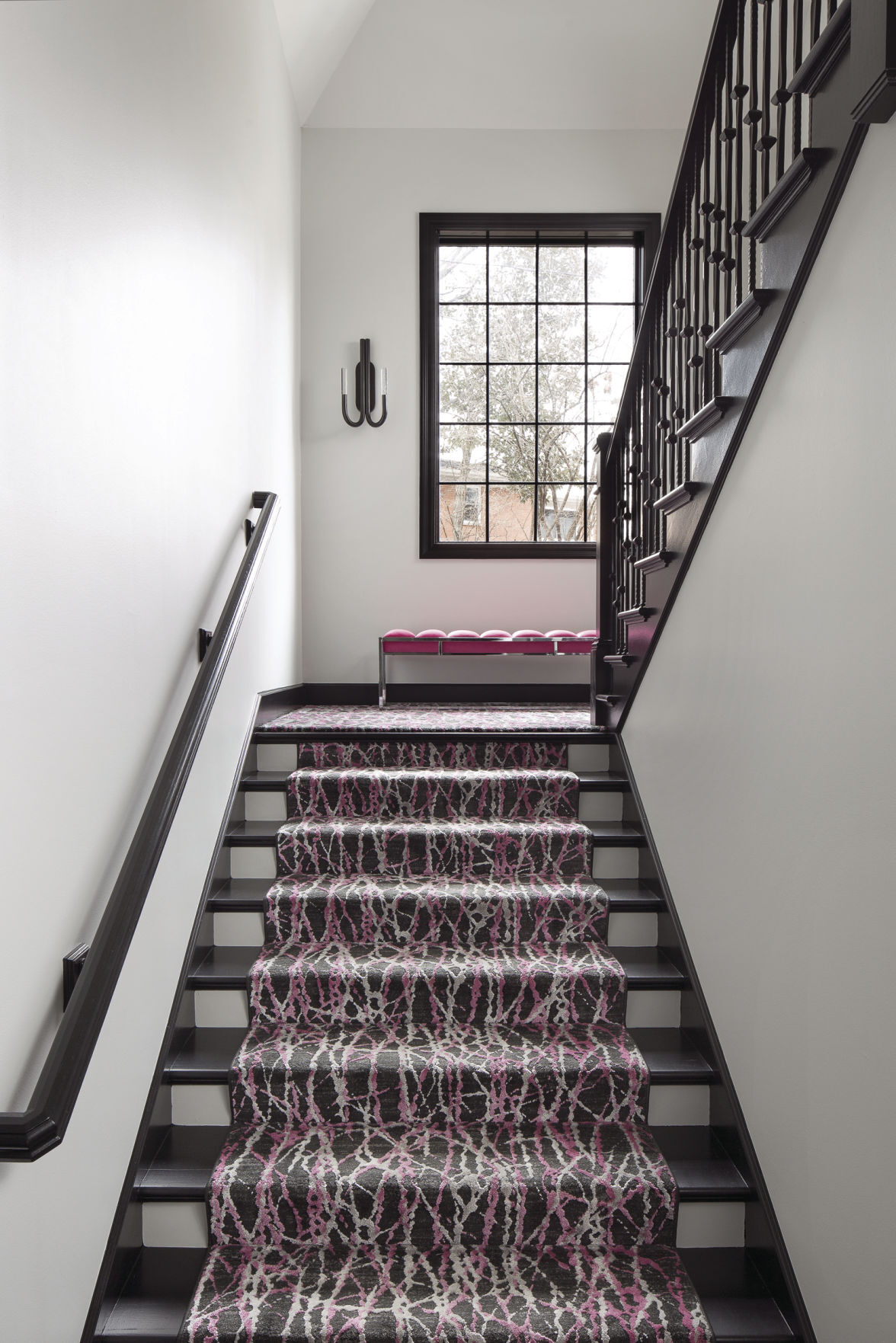 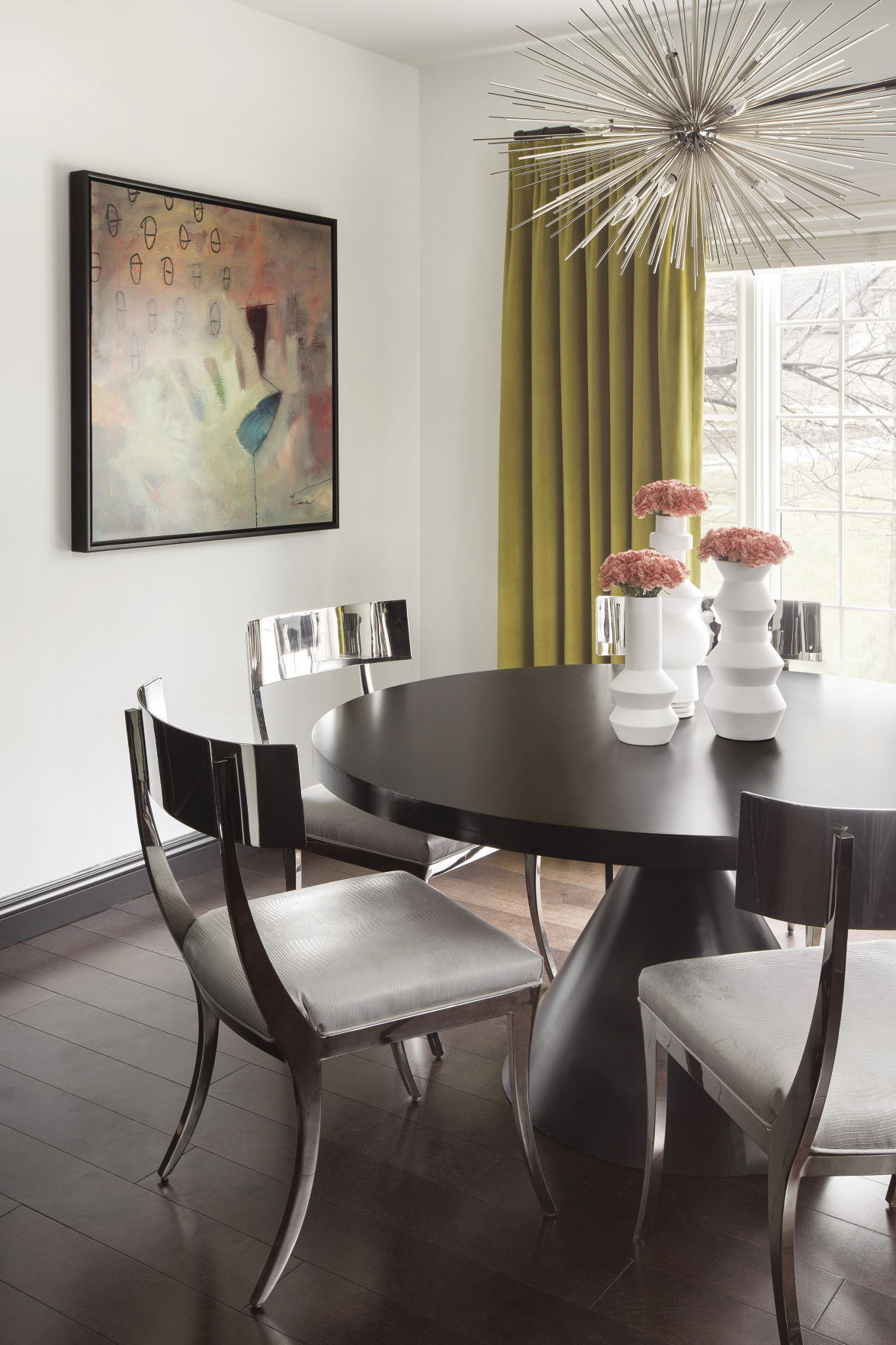 What started as a simple reworking of Jessie Miller’s clients’ Creve Coeur workspace resulted in a much larger-scale minimalistic makeover that captivated both client and designer.

“This house was built in the early 2000s, and the clients had worked with another designer previously, and they just weren’t getting the space to feel like home,” says Miller, namesake of Jessie D. Miller Interior Design. “The only space in the house that hadn’t been worked on was the office so we were able to start from scratch. It was a blank canvas for me.”

Miller adorned the walls of the workroom in a light, bright crackle-patterned wallcovering and selected a stunning stacked architectural desk that’s flanked by beautiful brass étagères.

“The pair of étagères are vintage that I’ve had in inventory for a really long time,” Miller says. “We just curated a really great collection of art and accessories.”

Art includes a Stephanie Vovas photograph placed as a backdrop and a fierce feline over a furry, modern bench. Black, white and gold sculptural art is also sprinkled throughout the space. And although Miller didn’t lend a hand in ordering the Pedro Friedeberg-inspired hand chair, she did give a hand in helping it fit the feng shui of the space.

“The clients had ordered the hand-shaped chair prior to when they hired me, and I had a lot of fun working with it,” Miller says. “It is a pretty iconic piece of furniture.”

“We completely reimagined their master suite, and we did some work in their more common areas of the space,” Miller says.

Common areas included the entryway and the stairway, in which Miller took risks with a retro runner.

“The clients definitely appreciate an ’80s aesthetic, which is so fun as a designer to do something that’s a little wilder and not as conservative as most people would want,” Miller says. “That was actually the only idea that I pitched them that they were hesitant about, and it is one of the family’s favorite things now, so it worked out pretty successfully.”

What Miller calls the showstopper of the space, though, is the master suite.

“It is incredibly soothing to be in the space, and it definitely promotes all the things you’d want to do in a bedroom,” Miller says. “It’s just a beautiful place to start your morning.”

“That chandelier was the first thing that I knew I wanted to use in the space,” Miller says, “but of course, as the universe works, it was the most complicated piece to get in. There was some shipping drama associated with getting it in for the space, some install drama, so I ended up installing all the crystals myself on it. It was like reading an ancient Chinese map, trying to figure out the specs on that thing, but it was 100 percent worth it. I would do it again tomorrow.”

“It’s so, so clean,” Miller says. “There are not a lot of things in the space that distract the mind. But it is still subconsciously stimulating due to the gradient in the wall, the color fades from dark to light as you move up the wall, and the experience that creates is pretty amazing.”

Now, claustrophobic is no longer a term Miller uses to describe this space, but rather, clean.

“It’s minimally exciting,” she says. “I would say slightly provocative because they were very adventurous with their art choices and will take risks and make some bolder decisions. I’d say it feels useful. I would say unexpected – there are unexpected, sculptural shapes. I feel like we will probably go back for an additional phase at some point.”