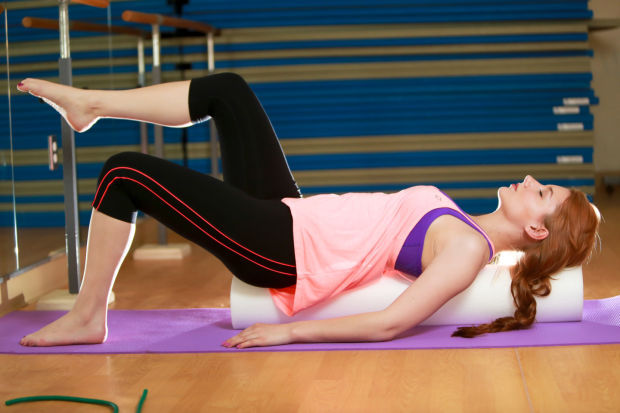 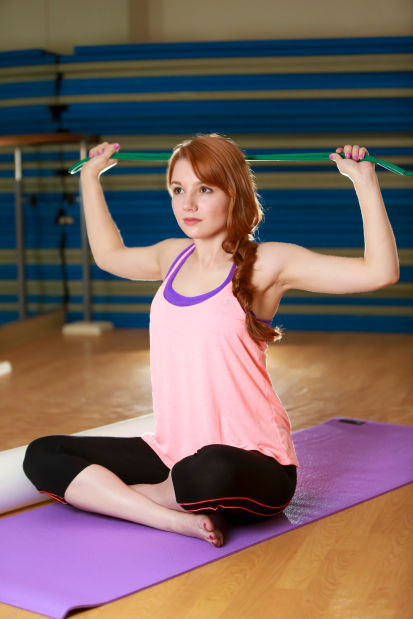 Everyone has met 'that guy.' When I was a teenager, 'that guy' sat behind me during the ACTs, and he had a serious case of the sniffles. 'That guy' forgets his cough drops when he goes to the movies. If 'that guy' is your neighbor, he'll get a new roof the day you have a migraine. No one wants to be 'that guy,' but the opportunity is always there. And to someone at the Webster Groves Recreation Complex, I am probably now 'that guy'—so let me say that I'm very, very sorry, fellow attendee, but balance just isn't my strong suit and it's not my fault that foam thing kept squeaking.

You see, the Webster Groves Recreation Complex Yogalates (yoga and Pilates) course, taught by Diana Barrios-Whitman, is an incredibly quiet class. The lights are dim. The mood is tranquil. The class begins with pleasant stretching.

Following this warm-up, we moved to the mat. We began with a large foam roller—imagine a shorter, fatter pool noodle—put on top of the mat. As a participant, you lay atop it so that your spine, tailbone and head are all running along the line of the semi-squishy thing. Your feet and hands are keeping you balanced, and it seems uncomplicated—almost a tad therapeutic, as it’s a very unique sensation for your back. Then, you lift one leg so your shin runs parallel to the ceiling. Easy enough. Next, you extend that leg out, like you're pointing with your toes at the spot where the wall meets the ceiling. Okay, I can do that. Now you move that same leg down and pretend to dip your toes into a pool, then bring the leg back to the first position. I practically scoffed—How simple, I thought. You're moving one leg. And it was simple. It was way, way too simple—until you forget that you're balanced on a foam roller.

It was terrible. I kept starting to roll off, so I'd try to correct my balance; the foam would make an awful squeak against my yoga mat and disrupt the painfully quiet room. I'd try the position again, over and over and over... It was full-on 'that guy' status.

Other less-noisy, but equally tense, movements in the class included stretching a band behind your back and performing abdomen exercises while keeping a ball between your knees. In great detail, I could visualize my hand accidently slipping off the band—or squeezing too hard on the ball—and propelling the toy across the room into another class member; because of this fear, I spent much of the class focused on keeping my grip. Sure, I was less-than-graceful throughout this course, but I made it through without accidentally slingshot-ing anything at anyone.

Yogalates involved less-mentally stressful work without toys. Movements and sequences were varied, which kept me constantly alert and interested. From the teeny bit I know about yoga and Pilates, this was a nice blend of the two. The class keeps your mind and muscles engaged, but it doesn't leave you sore enough the following morning to contemplate calling in sick.

Rarely did the class become too spiritual for my taste, but there were the occasional 'hippie' moments. At one point, while resting in child's pose, we were asked to stretch our arms to the sides and think about specific parts of the earth we'd like to hug. Literal tree hugging? Oh, boy.

Come to think of it, there was a surprisingly large amount of imagining in Yogalates. For example, we were asked to imagine ourselves wearing a corset that tied our ribs to our hips, in hopes of staying in proper core alignment. We're bringing fashion into it? Now, I can really get on board!

Speaking of fashion, I suddenly understand—don't necessarily condone, but understand—the idea of wearing yoga pants out-and-about in lieu of trousers. I wore the Lorna Jane 'Don't Wait 3/4 Tight' from Dimvaloo Active Living, which is an incredibly flattering and comfortable pair of pants. The temptation to throw out all other bottoms is high.

By week two of the class, the foam roller was less intimidating, and I—for the most part—stayed in control of where it was rolling. I also felt a little less like I was going to accidently shoot a bouncy ball or stretchy rope at one of my neighbors. And since I was more comfortable with the accessories, I was able to focus more on the tasks at hand. This left me feeling like I had completed a better workout, especially in the abdomen area—a part of my body I always feel like I'm missing while exercising.

Apparently I'm not alone. "I recommend Pilates a lot of times when people can't find their core," says Dave Reddy, Webster Groves Recreation Complex head personal trainer. "Pilates is great for core awareness, hip-muscle awareness and strength training…Yoga then does some similar things as far as core awareness and breathing, but it adds in the element of total body flexibility." He explains that the combination helps participants utilize the best of both worlds.

Ding, ding, ding! I didn't know I had lost it, but that is exactly what this class did for me: Yogalates reintroduced me to my core. Sure, it wasn't a heartwarming meet-up… In fact, it was a little more like daytime TV. ('Hey, Julia's core! Long time no see!' 'Shut up! You're an awful human, rest-of-Julia. You had a loaf of French bread for dinner!') Regardless, I'm happy we've become reacquainted; for the first time in a long time, I think I feel motivated enough to do my core some good.