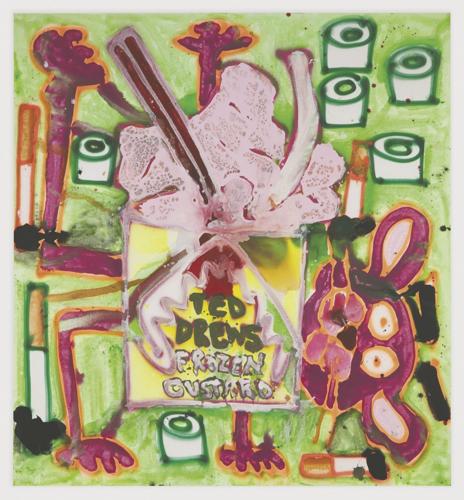 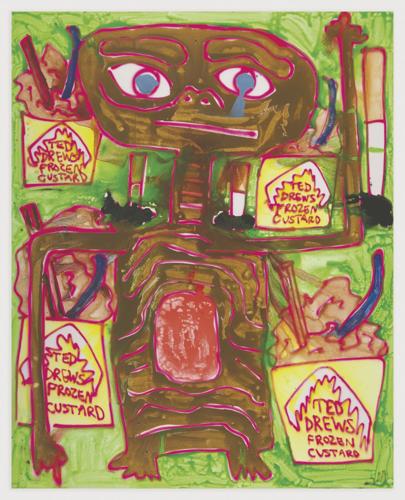 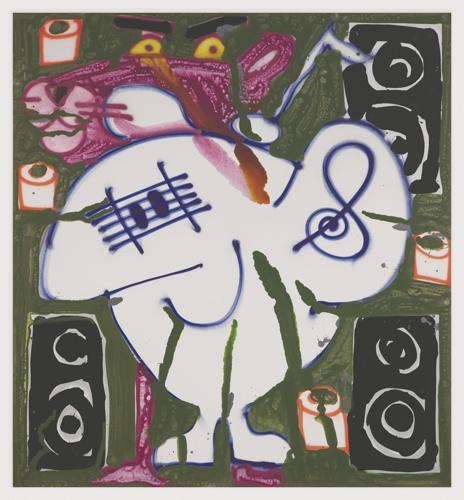 Nearly three years have passed since The Greenberg Gallery in Clayton opened its last exhibition, “Frankenthaler,” focused on Helen Frankenthaler. It ran from November 2018 to January 2019 (following a two-month mid-2018 extravaganza devoted to select works of the French giant Henri Matisse). In that respect, the current “Hamburger Bacon Black Olive and Mushroom With Salted Caramel Pretzel Concrete and Hi Fi Fo Fum” from Katherine Bernhardt qualifies as something of a visual art event.

The Greenberg opened the Bernhardt exhibition, which runs till Dec. 31, on Oct. 7. Pleasingly, Bernhardt’s work differs as much from Frankenthaler’s as Frankenthaler’s differed from Matisse’s.

Earlier, at the start of July, David Zwirner – a New York City-based gallery with locations also in London, Paris and Hong Kong – had announced that it would be representing Bernhardt, an exhibition of new work from whom it will mount in the U.K. capital next spring.

The artist’s curriculum vitae on the David Zwirner website states that she lives and works in St. Louis, her birth city. It also notes that beyond the Greenberg exhibition, this year alone Bernhardt will enjoy solo exhibitions in Panama City and online in Tokyo.

The New York gallery’s announcement touts “Bernhardt’s boundless visual appetite” and relates that she “first attracted notice in the early 2000s for her paintings of supermodels taken straight from the pages of fashion magazines such as Elle and Vogue.”

In the decade after that, the David Zwirner announcement continues, Bernhardt “began making pattern paintings that feature an ever-expanding list of quotidian motifs. Tacos, coffee makers, toilet paper, cigarettes, E.T., Garfield, Darth Vader and the Pink Panther make unlikely visual combinations within expansive fields of exuberant color. She takes pleasure in variety and fully investigates each of her obsessions before moving to another.”

Various works uploaded to the New York gallery’s website testify to her pop eclecticism and ebullience alike. For instance, Pop n Drop, a 120- by 96-inch acrylic/spray paint on canvas created last year, presents the commercial icon Kool-Aid Man, doubled, against a graph-paper grid, with the giant punch pitcher’s tagline (“Oh yeah”) floating atop it all in a speech balloon tailing to the right.

“Bernhardt’s trust in the fundamental underpinnings of painting gives her the freedom to depict anything she wants,” the David Zwirner announcement relates, “and the democratizing surfaces of her canvases work without illusion, perspective, logical scale shifts or atmosphere. With Bernhardt’s blunt yet lyrical approach, each painting has the feel of a complete thought that engages the artist’s rich and raucous free association.”

David Zwirner cites influences on Bernhardt ranging from Matisse through the Pattern and Decoration movement of the mid-1970s and early ’80s to such contemporary artists as the Scottish Peter Doig and the Mancunian Chris Ofili.

“In a palette that ranges from restrained to vivid Day-Glo, Bernhardt paints the canvases face up on her studio floor, employing spray paint, puddles of thinned-out acrylic and utilitarian brushwork to emphasize aspects of her motifs,” its announcement reveals. “Bernhardt’s process is improvisational and loose, at times inviting accident and chance into the works, as well as asserting an equal relationship between artist and material.”

In that regard, then, Bernhardt’s work may not differ altogether from that of her predecessor at The Greenberg Gallery – making this latest exhibition, like “Frankenthaler,” integral viewing for area art aficionados.