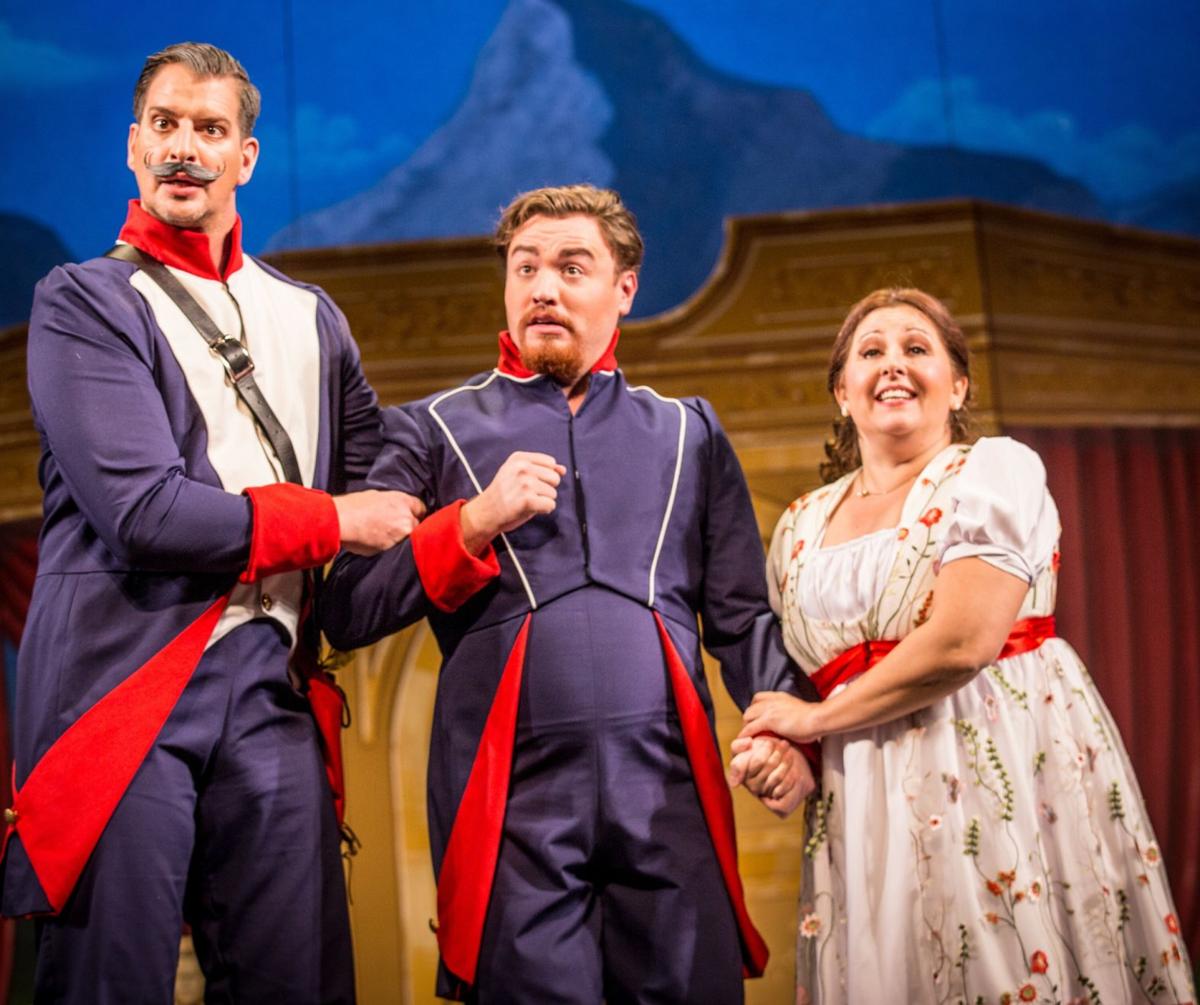 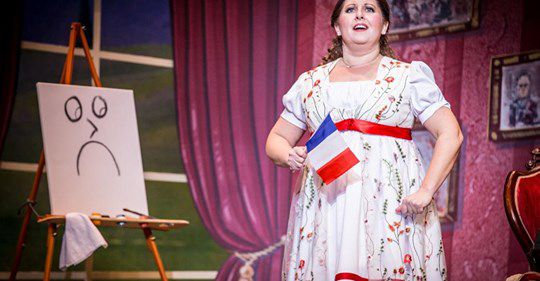 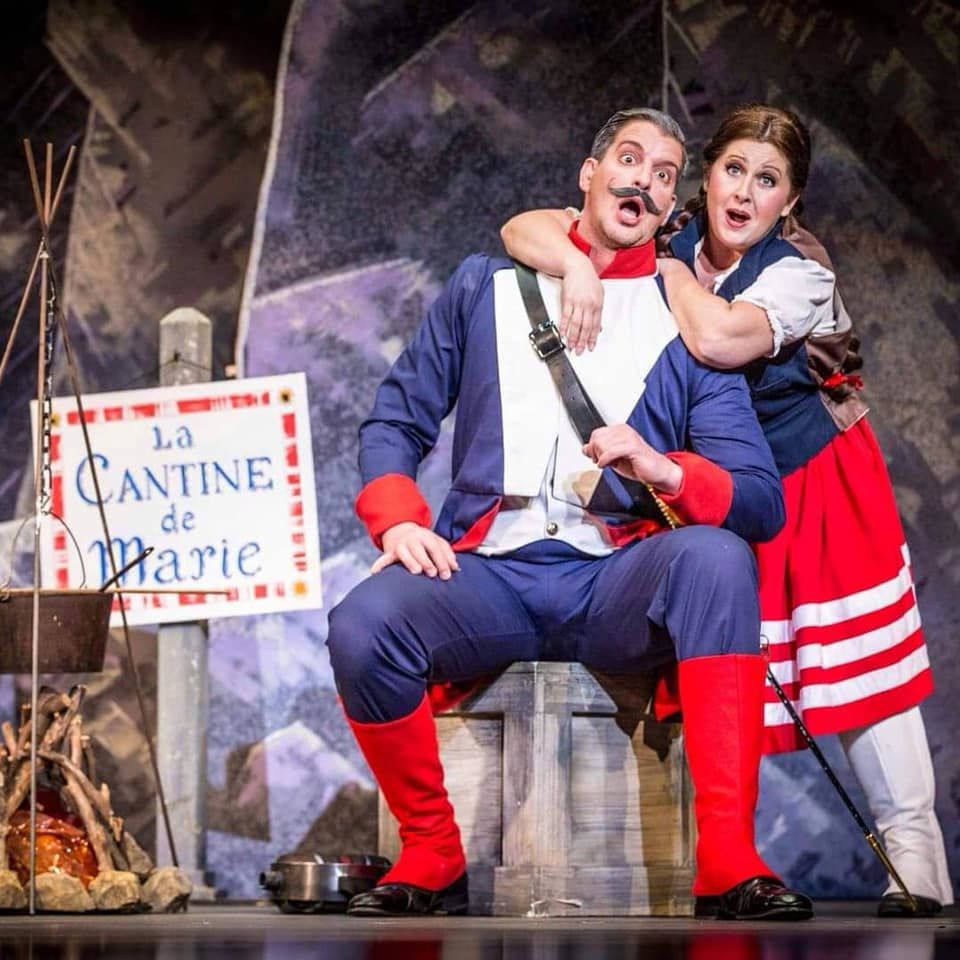 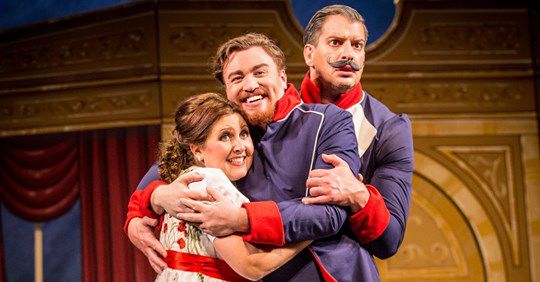 Story: Marie was found abandoned on a 19th century battlefield as an infant and subsequently raised by members of the Twenty-First Grenadier Regiment of the French Army. She is the heart and soul of the regiment, so much so that they have decreed that she can marry no man outside of their unit.

When she informs them that she has fallen in love with a young man named Tonio from the Tyrolean Alps in Switzerland, Sgt. Sulpice reminds her of their dictate. No problem, though, as Tonio promptly enlists in the regiment.

As Marie prepares for her marriage, the Marquise of Berkenfield approaches Sgt. Sulpice searching for her long-lost niece. Lo and behold, that niece is the very same Marie, whom the Marquise promptly takes away to her chateau in the Alps.

The Marquise intends to oversee the ‘proper’ marriage of Marie to the son of the aristocratic Duchess of Krackenthorp. Marie is resigned to her fate, but Tonio and the Twenty-First Grenadier Regiment aren’t going to give up without a fight.

Other Info: Following its high-spirited presentation of The Pirates of Penzance in November, Winter Opera doubled down on its winning run of comic operas with this humorous and delightful rendition of Daughter of the Regiment. While company general director Gina Galati may have stretched credulity a tad by portraying the title character, her finely tuned soprano more than made up for such an observation.

Galati’s expert vocal instrument richly imbued her various arias and she showed a nice touch with the comic material as well. Other performers proved their mettle, too. In particular, lanky Andrew Potter lent his imposing bass to fine use as Sergeant Sulpice, genial head of the Regiment and primary father figure to Marie.

He also proved adept at comic timing, extracting laughter from the English translation by Audrey Chait of the original French libretto by Jules-Henri Vernoy de Saint-Georges and Jean-Francois Bayard. Interestingly, the cast sung words to Donizetti’s music in the original French while switching to English for the considerable dialogue between numbers, with no ill effect.

Tenor Isaac Frishman served admirably as the love-struck Tonio and baritone Gary Moss did well milking the comedy in his droll performance as the Marquise’s long-suffering aide, Hortensius. Soprano Joy Hermalyn was amusing as the imperious Marquise of Berkenfield, who was much more likable and lovable in the show’s second act, even flirting with the smitten Sulpice.

Liya Khaimova was entertaining as the pompous Duchess of Krakenthorp, the VIP of VIPs at a ball held for Marie which even included “Lord Stanley and Lady Gloria” of St. Louis Blues’ Stanley Cup championship fame in attendance. Aleksandar Dragojevic as a corporal and John Richey as a local peasant rounded out the capable cast.

Edward Benyas elicited a strong performance by the Winter Opera orchestra in support of the fine goings-on up on stage, where scenic designer Scott Loebl’s colorful if simplistic set served satisfactorily for the great outdoors of the first act and the Marquise’s chateau in the second.

Natali Arco’s lighting and Felia Davenport’s costumes, highlighted by the hues of the French flag adorning the members of the Regiment, further enhanced the effect, as did Jessica Dana’s wigs and makeup and Laura Skroska’s props, including an amusing disintegrating statue.

Chait’s stage direction kept the performance moving at a brisk and rewarding pace while also allowing plenty of time for her amiable cast to infuse their singing and acting with considerable flair.

Winter Opera Saint Louis returns in March with a presentation of Giacomo Puccini’s La Fanciulla del West (The Girl of the Golden West).

Opera: La Fille du Regiment (The Daughter of the Regiment)