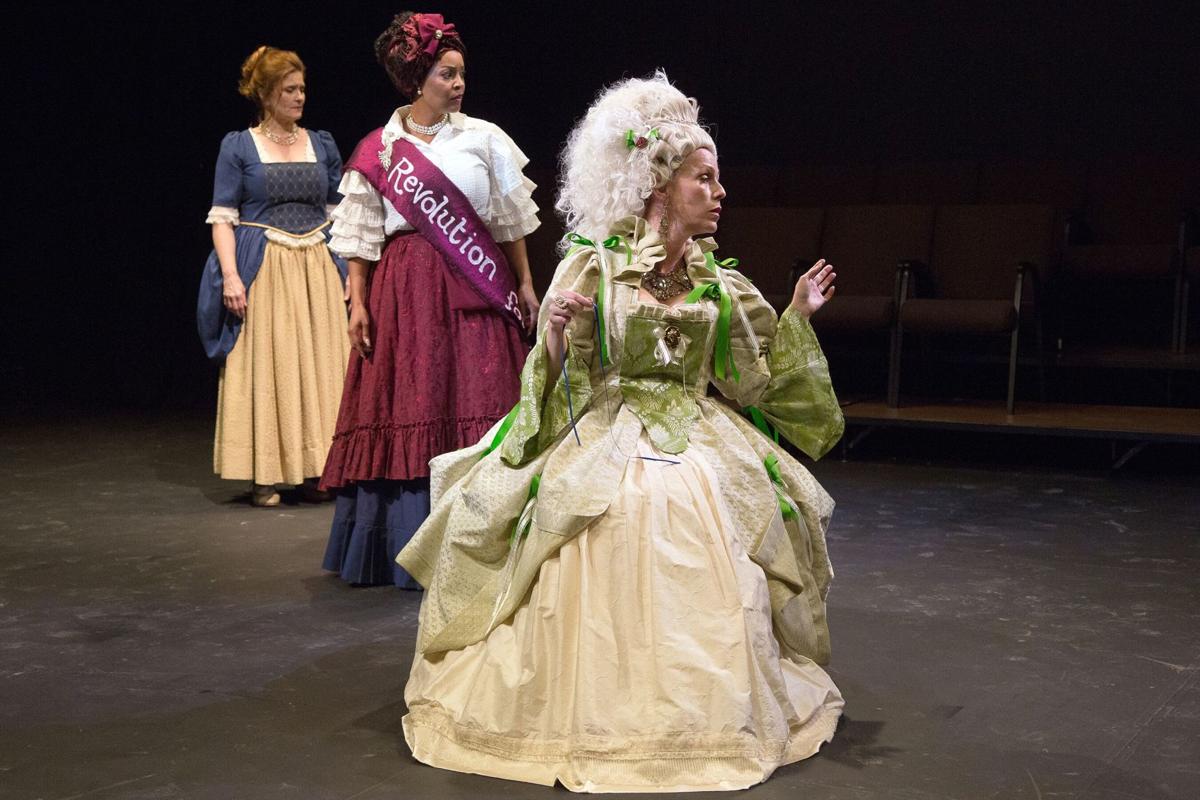 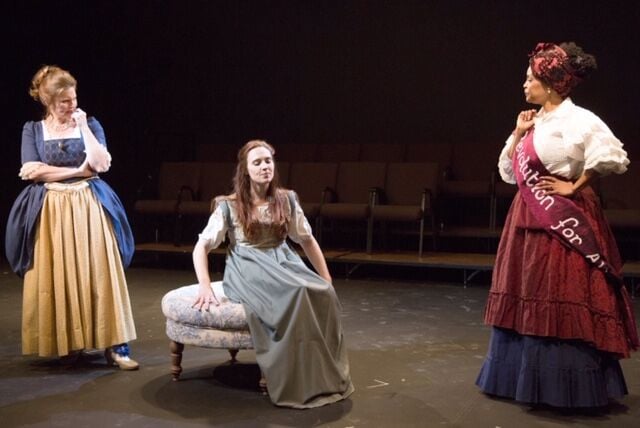 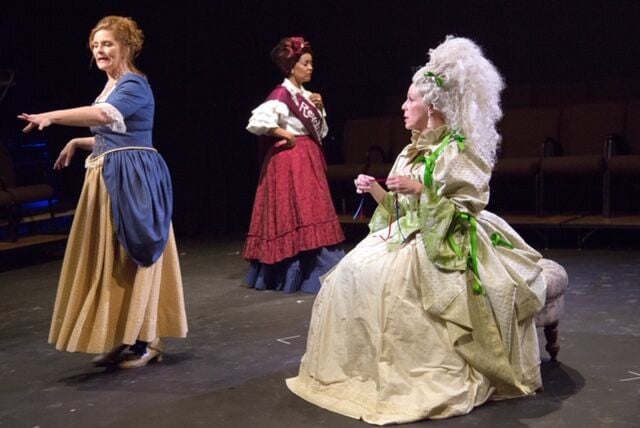 Story: France is a dangerous place in 1793, just a few years after the French Revolution of 1789 and smack in the center of the infamous Reign of Terror of 1793-94, when public executions by guillotine were de riguer.

It’s especially suffocating for women, as feminist writer Olympe de Gouges observes that the national motto of “Liberte, egalite, fraternite” is missing “sororite,” with women still relegated to second-class citizenship. So, de Gouges is more than interested when her friend, revolutionary spy Marianne Angelle, arrives in Paris urging de Gouges to become involved in Marianne’s cause to free the slaves in the Caribbean province of Saint Domingue.

De Gouges also is visited by young Charlotte Corday, who is in search of her “final line” before she follows through on her commitment to assassinate Jean-Paul Marat, politician and journalist aligned with the bloodthirsty Jacobins who thrived on torture. When deposed and addle-brained Queen Marie Antoinette pops by unexpectedly, the quartet of women commiserate with each other even as their frustrations mount.

Marianne sorely misses her husband, a fellow revolutionary who like his wife has written an “ultimate” letter to be delivered to her only upon his death. The virginal Charlotte is driven by her allegiance to the moderate Girondins to slay Marat and “kill one man to save 100,000.” Marie realizes she is shallow but still has enough dignity to protect her children and strike back at outrageous accusations of incest.

As for Olympe, she can’t decide between writing political pamphlets or penning a play for the feminist cause, and maybe she’ll do both. Time, however, is rapidly running out on all of them, and the guillotine’s bloody blade seems perilously close to all four, especially for those issued an appointment before the ominous Tribunal which oversees trials and executions. Viva le revolution, indeed.

Highlights: Insight Theatre Company offers St. Louis a Bastille Day bon-bon with its engaging version of prolific playwright Lauren Gunderson’s paean to several outspoken and accomplished women in the days of the French Revolution and its aftermath.

Gunderson, who has been the most-produced playwright in America since 2016, terms The Revolutionists “a Comedy, a Quartet, a Revolutionary Dream Fugue, a True Story.” Well, three out of four of those are accurate. It isn’t entirely authentic, since Marianne Angelle is a fictional composite of the symbol of French liberty (Marianne) and real-life slaves who fought to liberate Saint Domingue (now Haiti) from colonial France.

Marianne, in fact, is adorned with a sash proclaiming “Revolution for all” with her Caribbean-style costume, courtesy of designer Julian King, whose concept goes all out with the garish flamboyance of the deposed Queen Marie Antoinette, including her bizarre wig and its even stranger accoutrements. Leah McFall’s set design is simple but effective, with period furniture moved on and off the stage depending upon the scene.

Gunderson’s script can be witty and pointed, but it also can meander off course for maddening stretches, as in the three different moments when Act I could logically conclude before it staggers to a halt. Perhaps juggling the causes and personalities of four strong but disparate characters can become too unwieldy.

Nonetheless, director Trish Brown culls marvelous performances from her quartet of players, all of whom work well off of each other. Jenni Ryan portrays de Gouze as frazzled but determined to not “write what you know, (but) write what you want.” What de Gouze desires is equality for women and she’s willing to fight with her pen to achieve that, as Ryan convincingly conveys.

Kimmie Kidd-Booker brings the symbol of Marianne to ardent feminist life as the tough but compassionate Caribbean revolutionary, committed as much to freedom as she is to her soul-mate husband. Samantha Auch delivers the goods as the youthful and fiercely idealistic Corday, whose place in history is decidedly less favorable than her treatment by Gunderson.

Perhaps the biggest surprise is Laurie McConnell’s portrayal of Marie Antoinette. While accustomed to the oft-quoted cliché, “Let them eat cake” to symbolize the queen’s indifference to the plight of the people, McConnell shows another side of the deposed monarch as well.

Her Marie, while admittedly dimwitted, also is capable of reaching out to her comrades in thought to share a lusty laugh or a moment of pathos (and Marie Antoinette didn’t die in 1789, as I erroneously thought).

Gunderson is a terrific playwright and a heck of a researcher as well, delving into the largely unknown lives of women who have had a strong if submerged impact on history. The Revolutionists, while striking a chord of familiarity with current politics, succeeds in opening our eyes to its “hi, story” of the past.