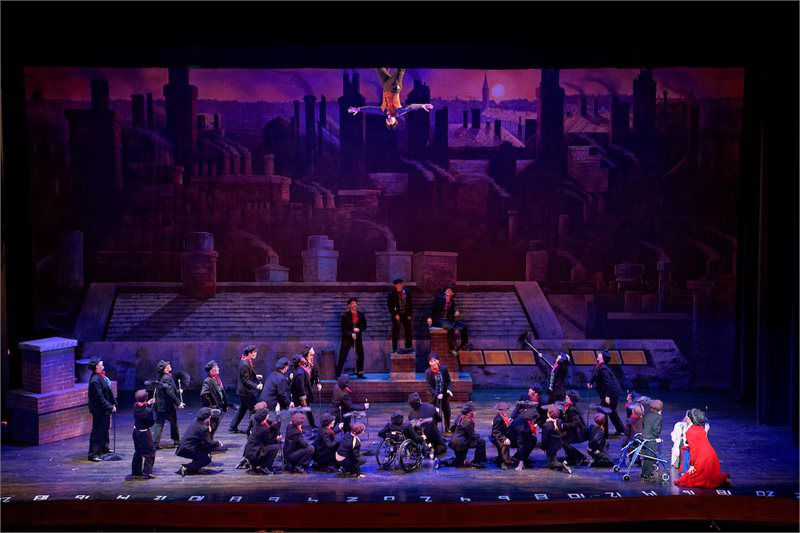 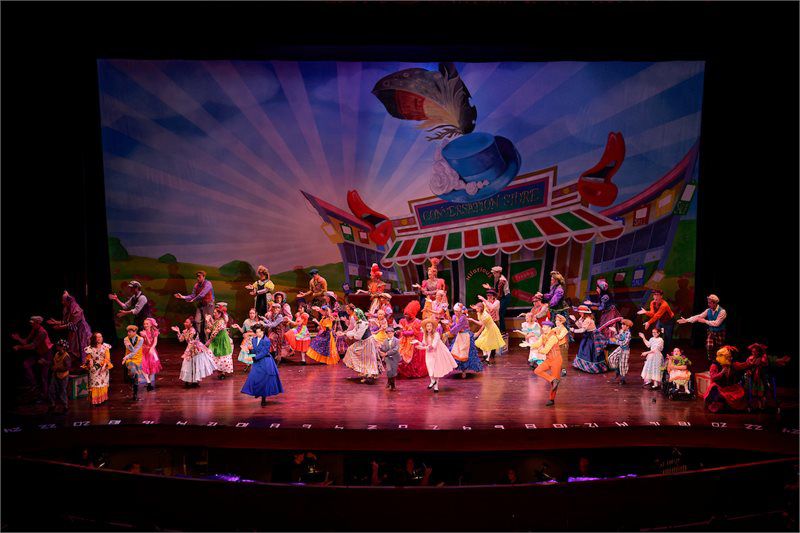 Story: Near the turn of the 20th century, George and Winifred Banks see still another exasperated nanny depart their London home, fleeing their incorrigible children Jane and Michael. George, a banker by profession, has little time for family issues and so he instructs Winifred to find another nanny.

Jane writes up her own advertisement for the position, which her father then tosses into the fireplace. In no time at all a brash young woman who calls herself Mary Poppins and declares that she is “practically perfect” arrives at the Banks residence, informing the family that she has assumed the nanny responsibilities.

Mary Poppins introduces Jane and Michael to all manner of new people, including her friend Bert, an amiable chimney sweep, a talking statue named Neleus and Mrs. Corry, the proprietor of a “conversation shop” located in the nearby park where “chatterboxes” gather daily.

Meanwhile, George has imperiled his position as a bank executive by turning down a loan request from a man named von Hussler whose idea for making money rings hollow. Instead, George decides to back the humble, enterprising Northbrook, who hopes to open a factory with jobs for many people. When von Hussler obtains a loan from another bank and appears to be a smashing success, George is suspended by his boss pending a hearing.

While Mary Poppins tends to the headstrong children, whose toys inform Mary of their bad behavior, Winifred struggles to find a place in ‘high society’ after leaving her acting career at George’s request. George has difficulty relating to his family due in no small part to the strict ways of his own nanny, Miss Andrew, who is summoned by Winifred when Mary Poppins suddenly departs.

Mary Poppins has done her best to instruct Jane and Michael on proper behavior and how to look beyond the surface to find the best in people. Has her influence had any effect on the children and, for that matter, their parents as well?

Highlights: Variety Theatre returned to the magical allure of Mary Poppins for its 11th annual professional production under the careful direction of Tony Award nominee Lara Teeter. As he has with the previous Variety presentations, Teeter skillfully blended the talents of professional performers with children of all abilities to produce a lively, entertaining and fulfilling show for all.

Other Info: According to publicity, Variety Theatre’s annual production is the only one of its kind in the nation, “featuring an inclusive children’s ensemble performing alongside a professional adult cast.” Each year Variety’s show includes children with disabilities in its ensemble as well as other talented kids and professional adult performers who work to deliver a well-honed product.

Variety Theatre’s objective is “to help children with disabilities achieve their full potential, opening up to them what is possible with the nurturing encouragement of others who share their passion for creative expression and the arts.” Each year executive producer Jan Albus, director and choreographer Lara Teeter and many others work diligently to produce a show which highlights the achievements of professionals and aspiring children alike.

Based on the series of children’s books by P.L. Travers as well as the Oscar-winning 1964 Disney film, the Mary Poppins musical written by Julian Fellowes premiered in London’s West End in 2004 before opening on Broadway in 2006, where it ran for more than 2,600 performances. It features the music and lyrics of Richard M. Sherman and Robert B. Sherman from the movie, with additional songs, music and lyrics by George Stiles and Anthony Drewe.

Erica Stephan excelled in the title role, both in her finely crafted portrayal of the independent nanny and also with her soaring soprano, which magnificently shaped such classics as Spoonful of Sugar, Anything Can Happen and Practically Perfect, the latter of which was written specifically for the musical.

Drew Humphrey reprised his role as the genial Bert from Variety’s 2015 version, charging the audience with his gravity-defying turn on Step in Time as he ascended one side of the stage, walked across the ceiling and then down the other side, tap dancing his merry way with the amazing assistance of Flying by Foy. It’s the rousing highlight of the second act and featured a stage full of adults and kids dressed as chimney sweeps in a tap dance extraordinaire deftly maneuvered by Teeter with Humphrey’s assistance.

Maya J. Christian was an enormous crowd-pleaser as the ageless Mrs. Corry, who led the large ensemble in the fast-paced, colorful, Act One number, Supercalifragilisticexpealidocious, performed at a dizzying pace amid Dunsi Dai’s wondrous set design of giant block letters and Mrs. Corry’s multi-hued shop. Dai also provided a series of handsome mural backdrops as well as the Banks’ stately, two-story home on Cherry Tree Lane.

Michael James Reed gave a polished performance of the good-hearted if trepidatious George, Heather Matthews brought out Winifred’s own self-doubts as well as her sweet nature, while Taylor Gilbert and Gabe Cytron delighted as Jane and Michael, respectively.

Debby Lennon was properly frightening as the tyrannical Miss Andrew, Dena DiGiacinto contributed as the aristocratic Miss Lark, Patrick Blindauer did well as the scheming von Hussler as well as the local constable and Christopher Hickey delighted as the kindly Northbrook and the befuddled park keeper.

There was fine work as well by John Katz as Neleus, Amy E.W. Prince as the Bird Woman, Jamie Eros as the exasperated Katie Nanna and Mason Kelso as Jane’s abused doll Valentine. Others in the polished cast included Chandler Ford, Cecily Dowd, Rebecca Hartman, Jimmy Capek and Will Bonfiglio.