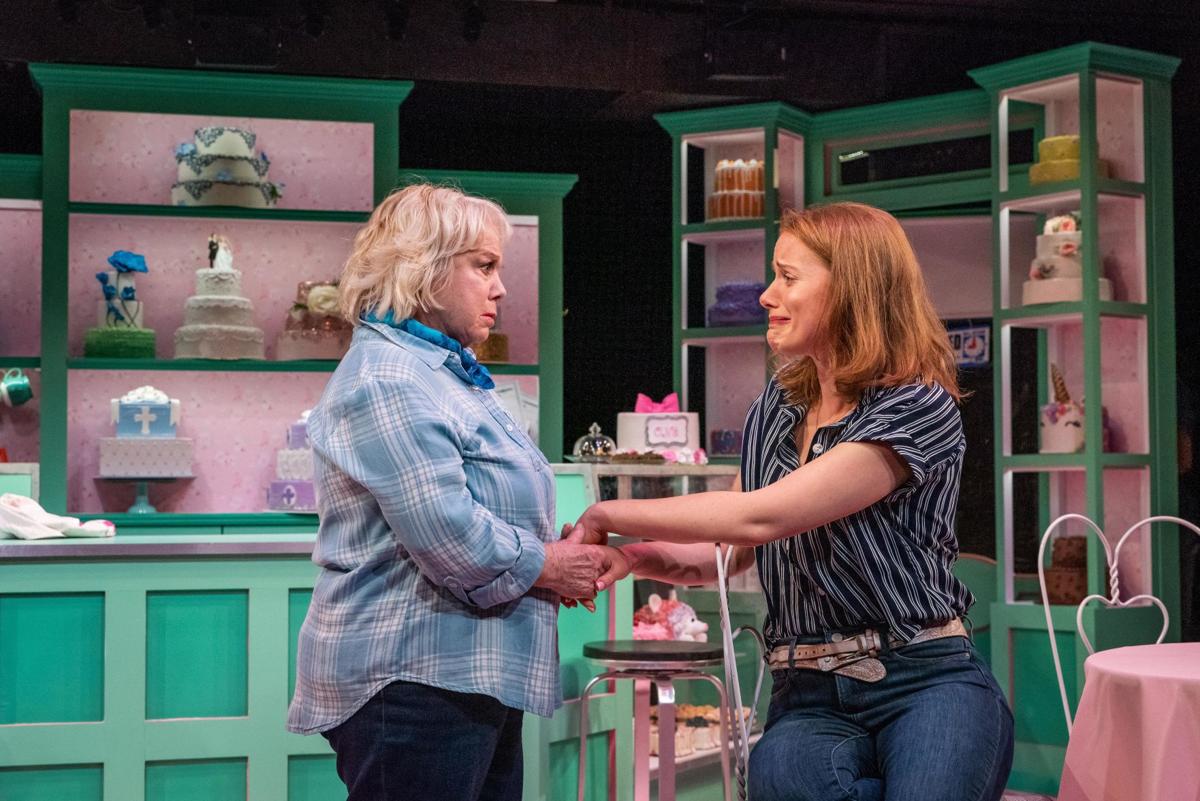 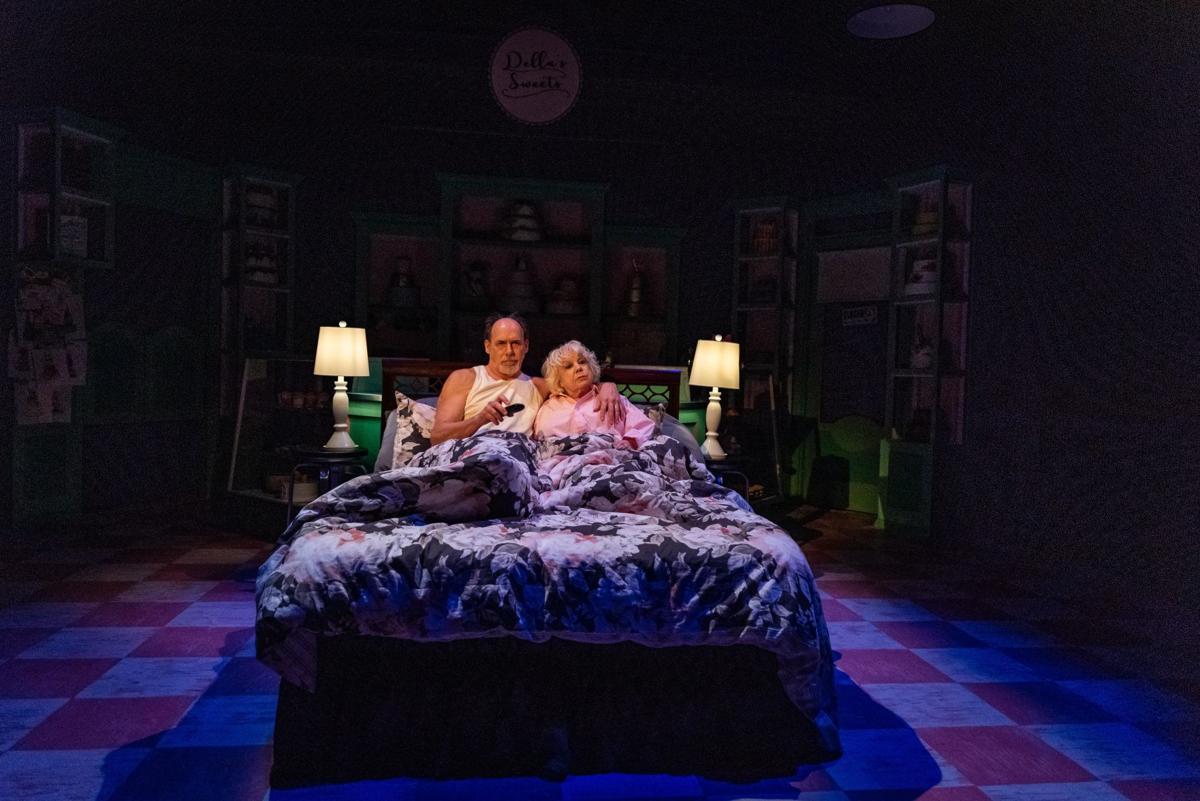 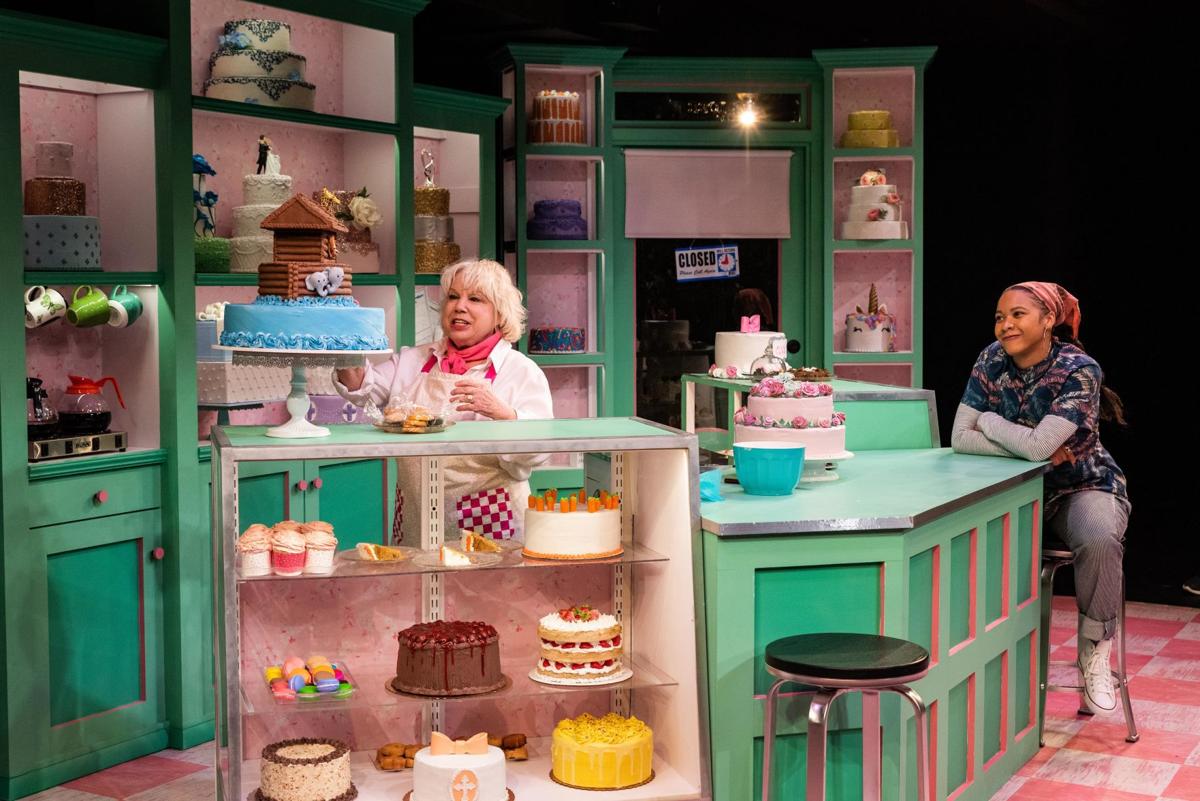 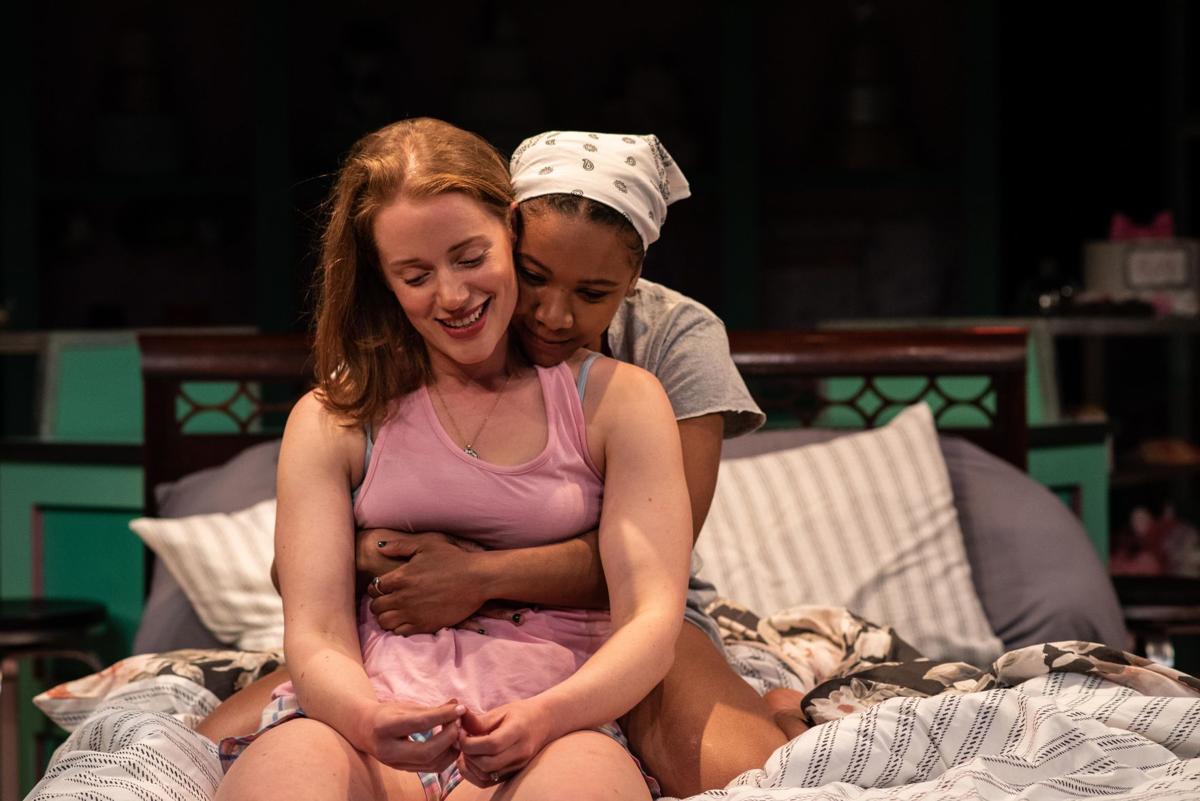 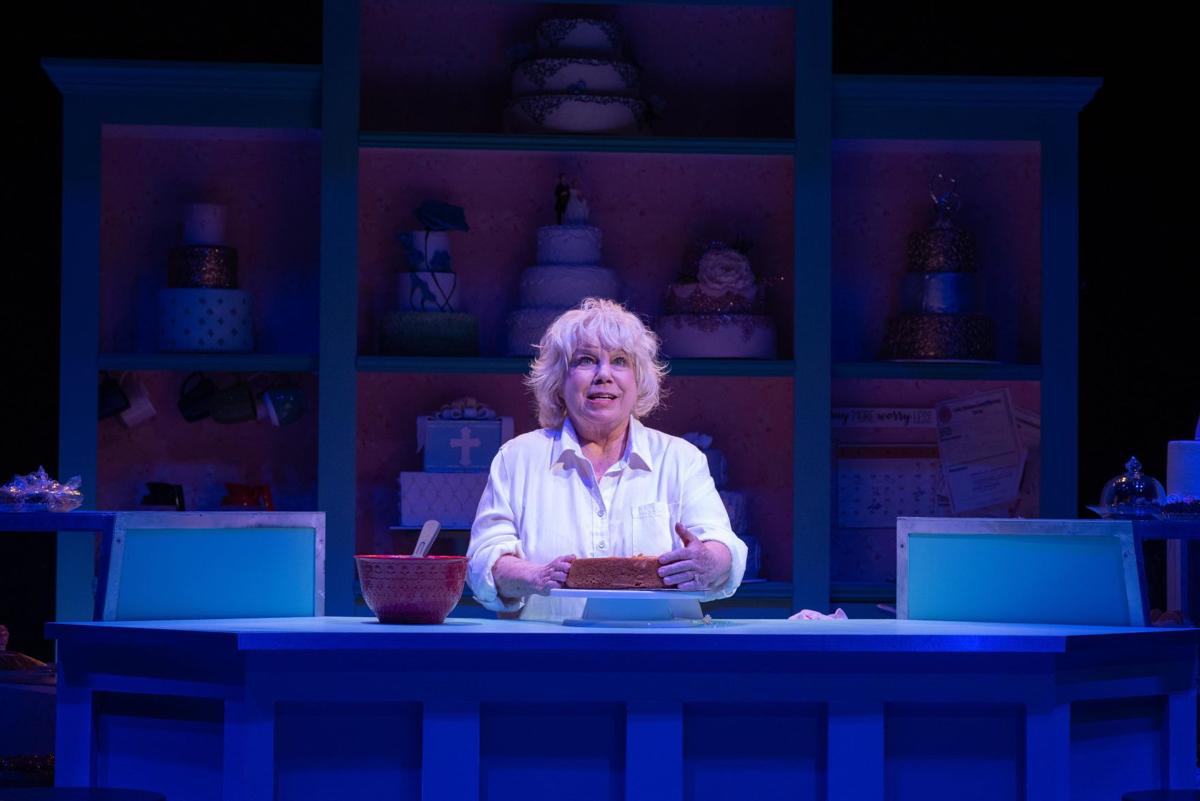 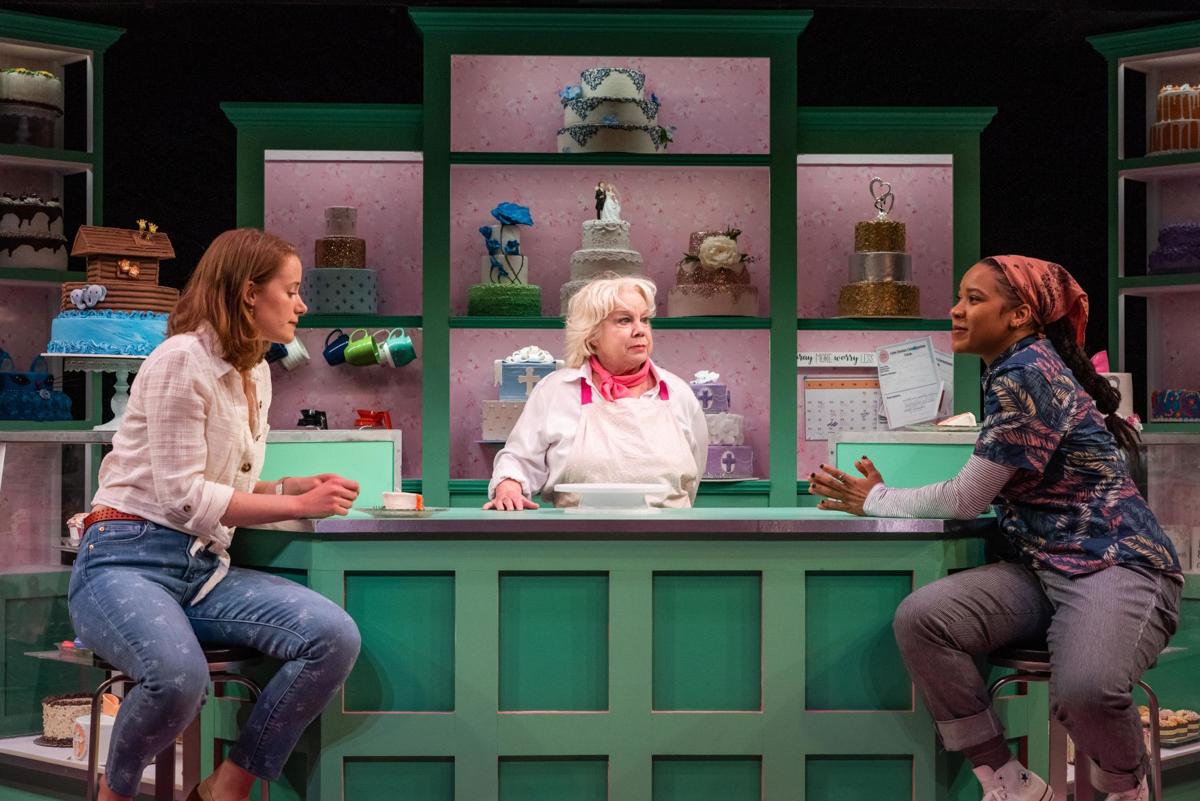 Story: Jen has returned home to the North Carolina town where she was raised after living in New York City for several years. She stops by Della’s Sweets, the bakery run by Della, the non-family godmother who helped rear Jen along with Jen’s late mother.

Della is thrilled to see Jen and wants to know all about her life in Gotham. She’s delighted to hear that Jen is engaged and about to be married. When Della asks her goddaughter who the lucky man is, though, she’s less than thrilled when Jen says her fiancee is another woman.

That woman is Macy, a black writer who has contributed articles to the magazine where Jen is an editor. She’s also there to meet Della, who is cordial to her but keeps her distance, physically and emotionally.

Della is happy to share her own news, too: She’s been selected to appear as a contestant on The Great British Baking Show, a reality series which gives little-known bakers their shot at stardom. Della is scheduled to leave in a couple of weeks for her appearance and is in the process of selecting what to bake as well as what to wear for such an auspicious occasion.

The conversation is polite albeit a bit awkward until Jen pops the question: Would Della make one of her delicious concoctions, most likely Jen’s childhood favorite, as the wedding cake for Jen and Macy? As a smile disappears from her face, Della checks her calendar book and proclaims that she’s “all booked up” six months from now, when the wedding is scheduled to occur.

Jen is disappointed but Macy is miffed. Macy knows first-hand rejection when she sees it, having been disavowed by her own father for her lifestyle. Meanwhile, Della begins to relent a bit about the strictures of her religious convictions until her genial husband Tim insists that she most certainly will not participate in such a ceremony.

There’s a lot of emotional ground to cover between these four people if they’re to have any kind of substantial relationship going forward. Will “the cake” turn out to be sweet or bitter?

Highlights: The Rep closed the debut season of new artistic director Hana Sharif with a thoughtful presentation of this intelligent, open-minded look at disparate lifestyles in search of a common thread of humanity.

Other Info: In her program notes, Sharif writes that playwright Bekah Brunstetter penned The Cake after her “father, a former North Carolina (U.S. S)enator, helped create the 2011 Defense of Marriage Act which defines marriage solely as a union between one man and one woman.”

While dramaturg Sarah Brandt’s program piece begins with the sentence, “It’s not about the cake,” she’s partially wrong. It may be more than the cake, but Brunstetter’s play uses the background of a complaint filed by Dave Mullins and Charlie Craig with the Colorado Civil Rights Commission after the pair were turned away by Jack Phillips, a Christian baker who refused to make a wedding cake for them.

Brandt further notes that after the Commission ruled in favor of Mullins and Craig and was upheld by the Colorado Court of Appeals in 2015, Phillips petitioned the U.S. Supreme Court to hear the case that his First Amendment rights had been violated. In June 2018 the Court ruled 7-2 in a narrowly defined decision that Phillips faced anti-religious bias from the Colorado Commission.

So, there’s plenty of background, both personal and political, behind Brunstetter’s one-act, 90-minute story, which is filled with considerable comedy as well as intense dramatic conflict. Director Sara Bruner does a splendid job coaxing her cast to bring out both the laughs as well as the thoughtful and emotional disagreements between all four characters.

The Rep quizzically doesn’t list a scenic designer for The Cake, which is unfortunate because it’s a tasty wonder to behold, with shelves of mouth-watering confections in full view in Della’s Sweets shop behind her counter. There’s also a table and a pair of decorative chairs at stage left where Della and Jen reminisce about bygone days and a bed wheeled in and out for scenes away from the shop.

David Van Tieghem’s whimsical sound design focuses on the disembodied voice of the English host of the British reality baking series, who grows increasingly hostile and personal toward Della in her daydreams about her shot at stardom, as well as a coy reference to Cat Stevens. Voice and dialect coach Joanna Battles ensures that that voice sounds distinctly British while she also assists Denny Dillon with Della’s Southern drawl.

Costume designer Ulises Alcala dresses the young women in casual attire, Della in some tacky shop garb and her husband Tim in his blue-collar togs. Robert Denton’s lighting is especially effective when the baking show ‘spotlight’ casts its disapproval of Della with some harsh illumination. Samantha Kaufman provides “intimacy choreography” for scenes between Jen and Macy and later between Della and Tim, the latter especially humorous.

Dillon succeeds in bringing some much-needed depth to Della’s character. She can sound dimwitted and blissfully naive in her reactions to Jen’s impending wedding, yet also reveal some surprising secrets about herself and her own thoughts to husband Tim.

There’s genuine friction developed between Dillon’s character Della and Dria Brown as the militant Macy, who has a low tolerance level for those who disagree with her and her lifestyle, something Brown depicts well in her interpretation. There’s additionally considerable give-and-take in the dialogue between Brown and Rigel Harris as the conflicted Jen.

Harris has some poignant moments as she recalls her late mother and the latter’s stern traditions about sex and the Bible, while also ensuring that Della understands that Jen has never been happier now that she can express her own sexual individuality.

As Tim, Carl Palmer brings depth to what could be a one-dimensional character, showing sternness with his abrupt responses to Della but also concerned about his wife’s welfare.

Unfortunately, The Cake closed after just one weekend of performances due to concerns about COVID-19 and St. Louis County’s directive to limit large groups. Those who were able to see it, though, had plenty of food for thought.