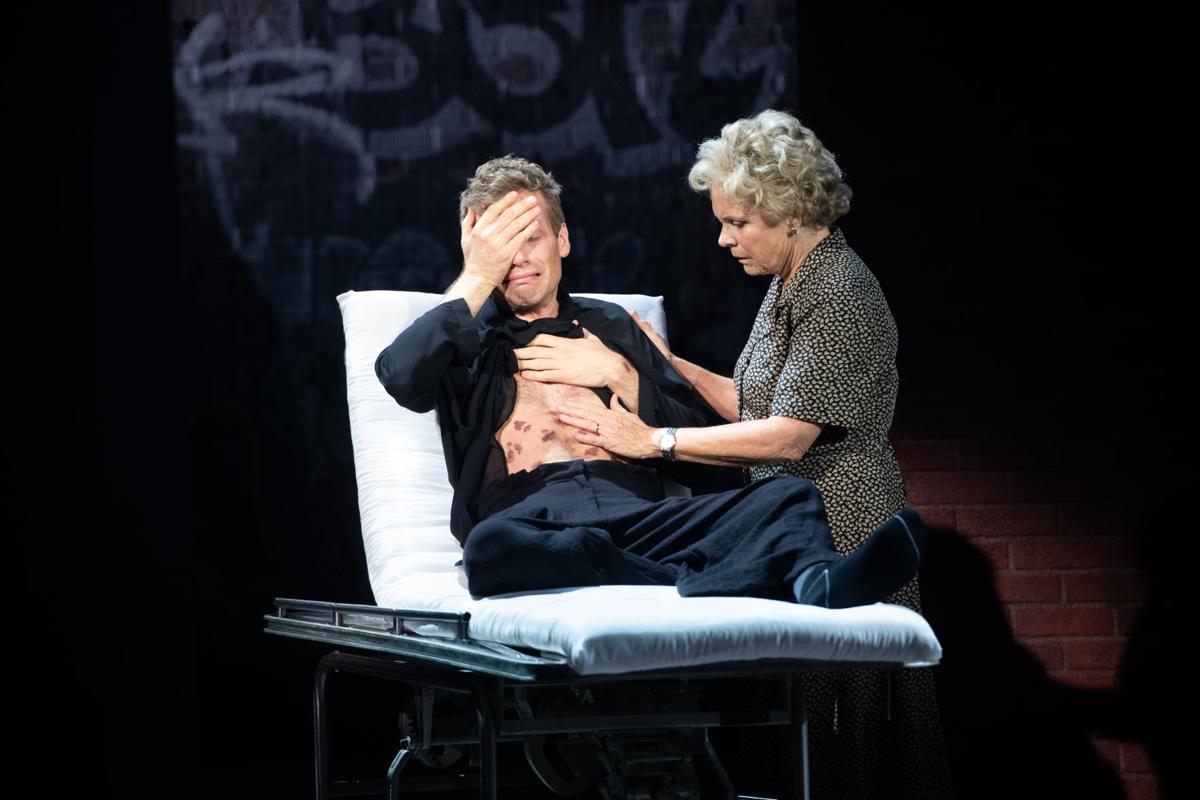 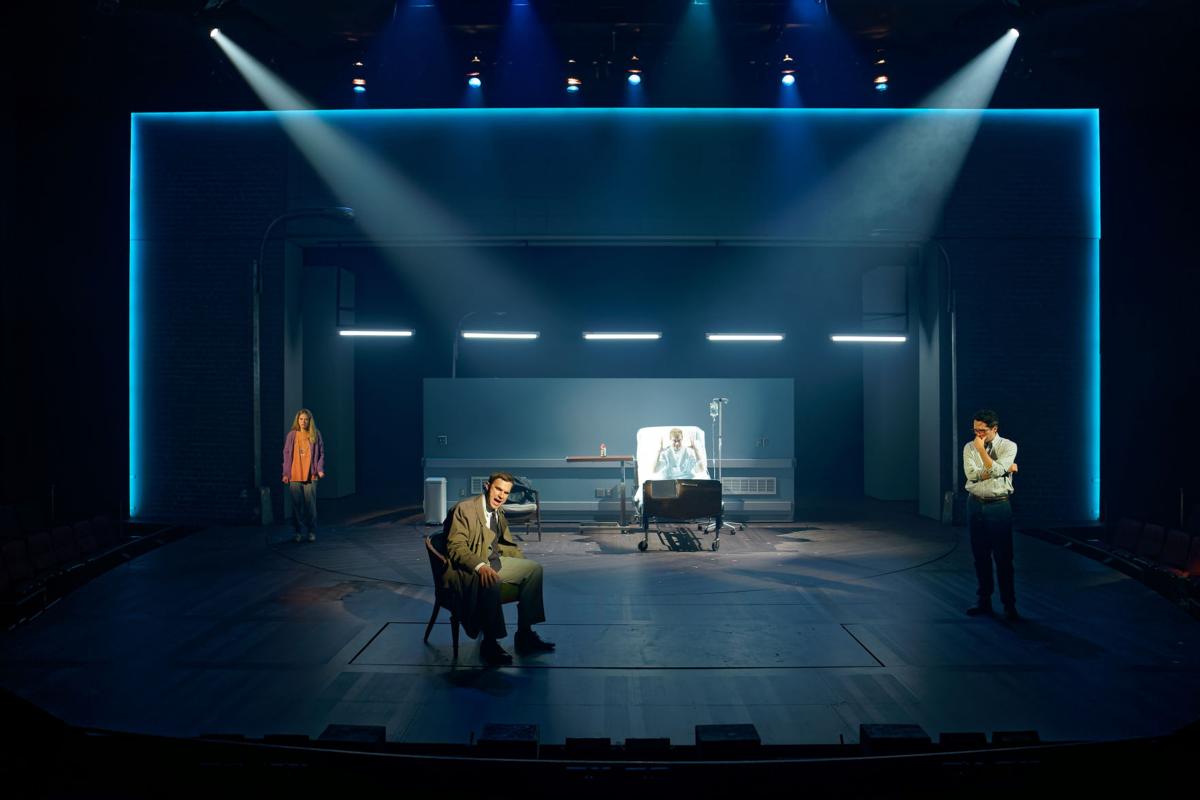 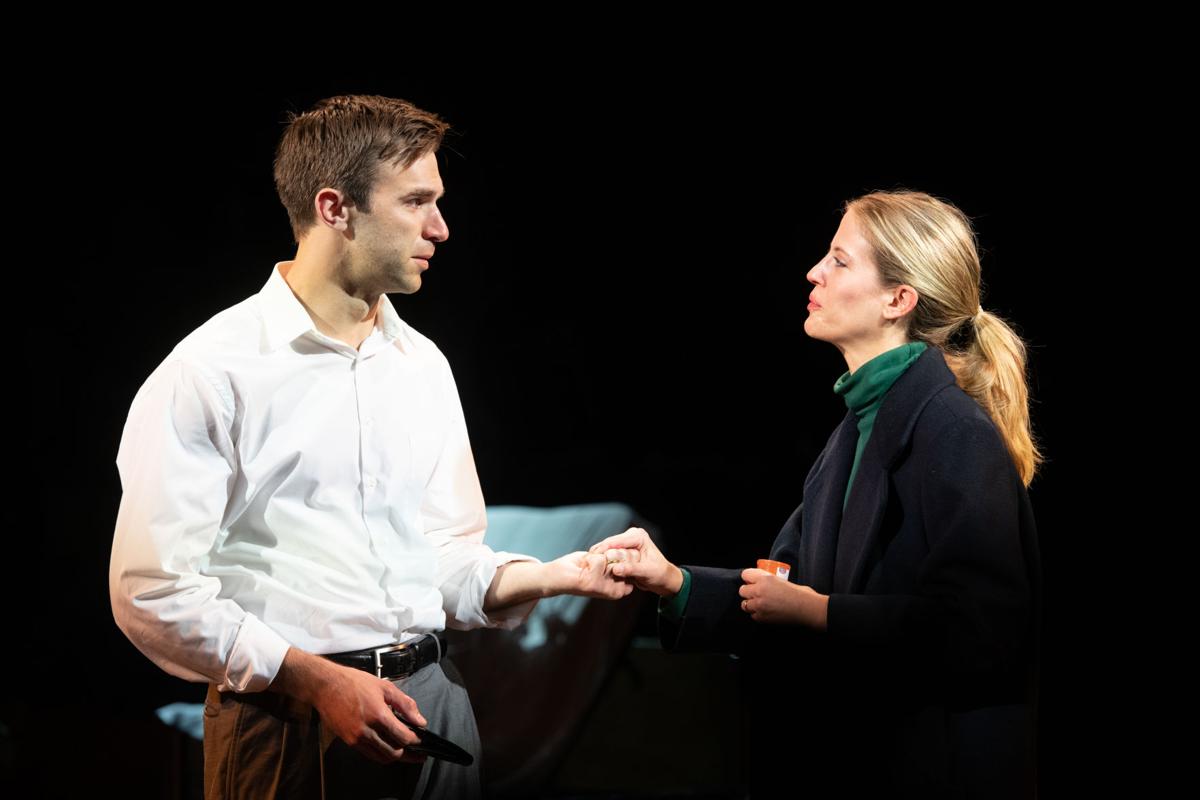 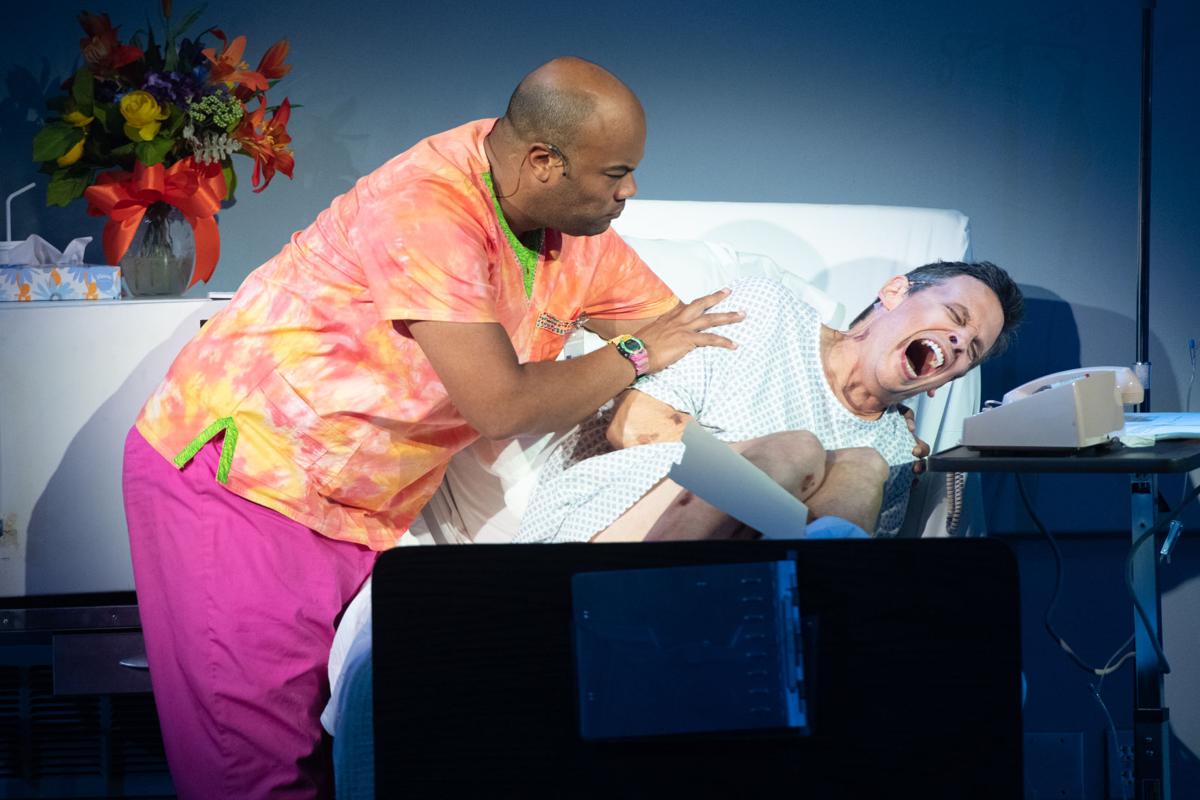 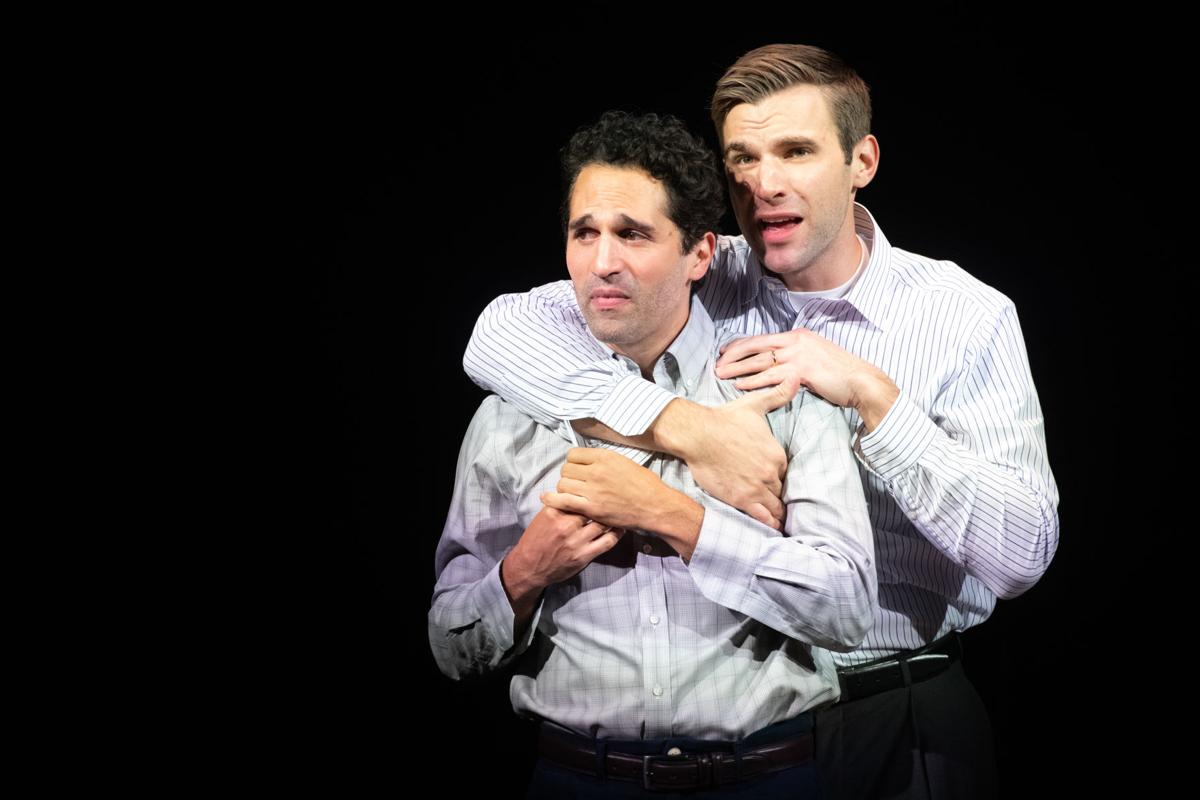 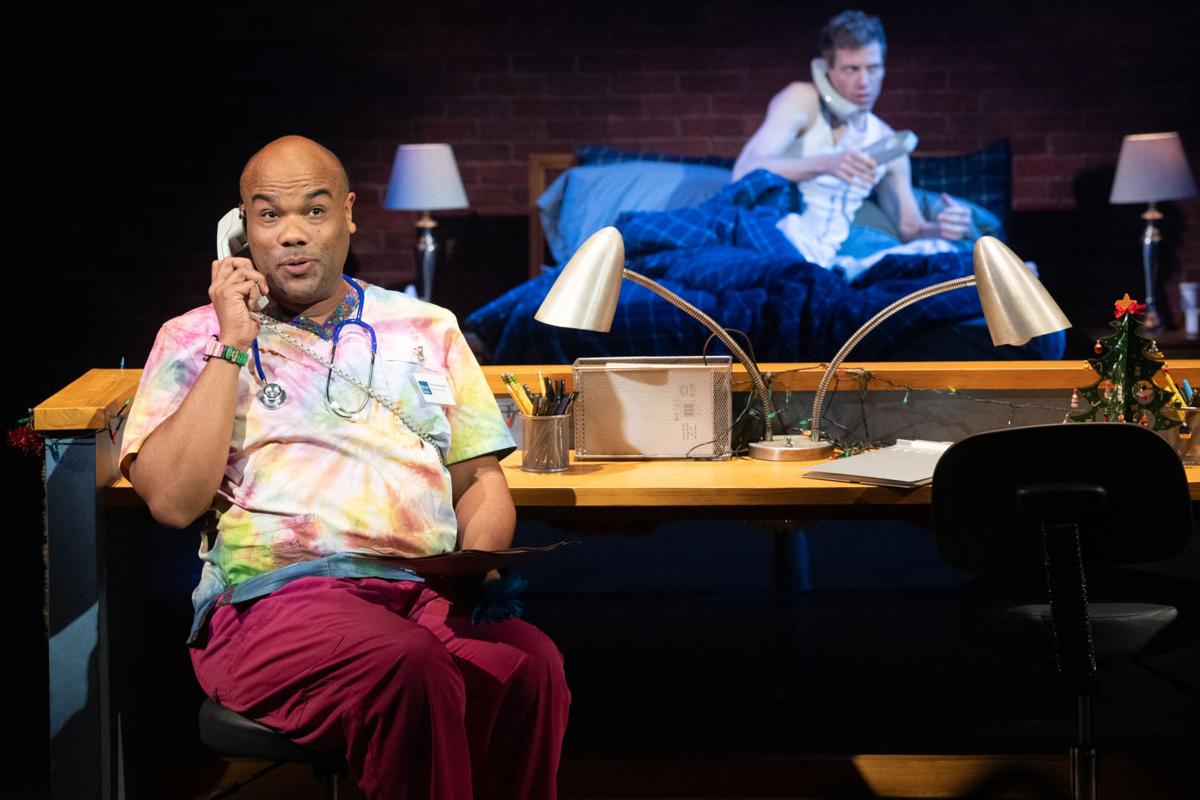 Story: Perestroika picks up on the story initially told in Millenium Approaches, the first part of Angels in America. To recap Millenium Approaches, in October 1985 Prior Walter XXXIV, the last scion of a WASP family which dates its arrival in America back to the Mayflower, receives shocking news from his physician. The 30-year-old Prior has been diagnosed with a deadly disease called AIDS, for Acquired Immune Deficiency Syndrome, which was first reported in 1981 and has become a scourge in the gay community.

His lover, Louis Ironson, is stunned at the news and soon finds himself unable to cope with its implications. In Prior’s most urgent hour of need, Louis abandons him and retreats instead into his own uncertainties.

Louis meets a closeted gay, Mormon, Republican attorney named Joe Pitt at the same judge’s office in New York City where both of them are employed. While Joe shows compassion to Louis, he angrily denies that he is gay.

Pitt, a protege of notorious lawyer and deal-maker Roy Cohn, struggles to make his marriage work with his agoraphobic and seriously depressed wife Harper, who suspects her husband may be homosexual. Already thousands of miles removed from her home in Salt Lake City, Harper retreats into her own fantasies with the help of her addiction to valium.

When Cohn receives his own diagnosis of AIDS, he defiantly informs his physician that the record will show that he has “liver cancer,” not AIDS. Meanwhile, as Prior drifts in and out of hallucinations brought about by his own illness, he is visited by an ‘angel’ who proclaims him to be a prophet who has been groomed to perform a great work for humanity.

In Perestroika, while being treated in a hospital, Cohn continues his belligerent ways, verbally attacking his nurse, Prior’s friend and former lover Belize, in vulgar and insulting fashion. However, when Cohn learns of a new, experimental treatment drug for AIDS called AZT, he pulls all of his powerful strings to store a cache of it for himself.

At the angel’s orders, Prior discovers an ancient book under his kitchen floor tiles. He believes that the angel wants him to get humanity to “stop moving” forward in order to restore heaven’s rightful place in the universe. Hannah, who met Prior at a diorama exhibit at the Mormon Visitors’ Center where she now volunteers, tells Prior that she believes in visions of angels and finds his story plausible.

As Cohn slips into delirium and the final throes of his AIDS-related death, he lashes out at Belize as well as the ghost of Ethel Rosenberg, while also ordering Joe to control his natural sexual urges and return to his wife Harper.

Prior and Belize confront Prior at his office over Joe’s affair with Louis but then abruptly depart. When Louis is angered after learning that Joe has written several homophobic papers as a ghost writer for a doddering judge, his confrontation with Joe ends in a fistfight that terminates their relationship.

After Prior is readmitted to a hospital with pneumonia, he is visited again by the angel. On Hannah’s advice, he “wrestles” the angel as Jacob had in the Old Testament, then climbs a “ladder” to heaven, where he informs the “continental principalities” of angels that he refuses their edict and chooses instead to return to Earth for whatever life he has remaining.

Other Info: New Rep Augustin artistic director Hana Sharif marks her arrival in town with an electrifying production featuring a star-studded cast in this smart, superbly shaped presentation of Kushner’s Pulitzer Prize and Tony Award-winning epic masterpiece. Perestroika is being presented in rotating repertory with Millennium Approaches throughout its month-long run.

Speciale wisely breaks up both parts into three acts apiece so that the three hours and 30 minutes of running time in each segment actually move quite briskly, with nary a stumbling moment. That’s due in part to Kushner’s amazing script but also to the fluidity in the portrayals of his many characters, both major as well as myriad minor roles, affected by each of the performers.

The action takes place on Timothy Mackabee’s insightful scenic design, which utilizes a panoramic back screen where Alex Basco Koch’s projection design offers panoramic views of the city, graffiti-inscripted walls and heavenly environs, including a ‘ladder’ for Prior to ascend.

Joanna Battles is to be commended for her work as voice and dialect coach, especially pronounced in Meredith Baxter’s portayal of Ethel Rosenberg, and the flying effects prepared by ZFX, Inc. bring wondrous illusion to the angel’s comings and goings.

While the presentation of Perestroika is not quite up to the emotional excellence of Millenium Approaches, at least in The Rep’s version, nonetheless it is compelling and provocative theater of the highest order. Speciale and his immensely talented players successfully weave Kushner’s trio of tales (about Prior, Cohn and Joe) seamlessly throughout myriad scene and set changes, maintaining taut theatrical momentum.

Speciale’s savvy and indefatigable cast includes familiar faces such as Meredith Baxter, star of five TV series in five decades of accomplishment, who shows the slowly developing growth of Hannah as well as the grim appearance of Ethel Rosenberg’s ghost to Cohn. Barrett Foa, known for his role as tech geek Eric Beale on NCIS: Los Angeles, delivers a powerful performance as the panic-stricken, fiery and puzzled prophet Prior.

Peter Frechette captures the alarmingly acidic and toxic personality of Cohn with a series of vicious and alarming diatribes, while Ben Cherry studiously straddles the line of ambiguity in Louis’ character, although in Perestroika he strays too often into a Woody Allen impression.

Perestroika pairs handsomely with Millenium Approaches to make The Rep’s initial production of Angels in America: A Gay Fantasia on National Themes an intelligent and impressive achievement.

Play: Angels in America: A Gay Fantasia on National Themes