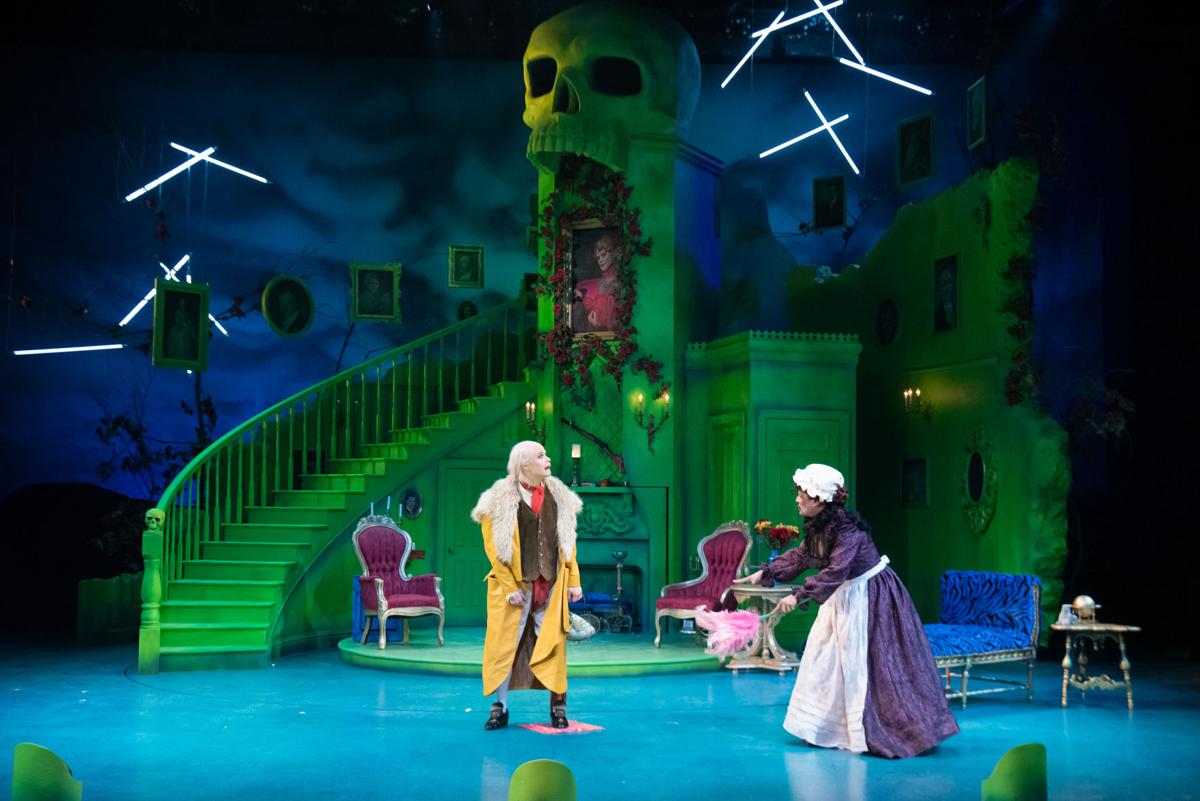 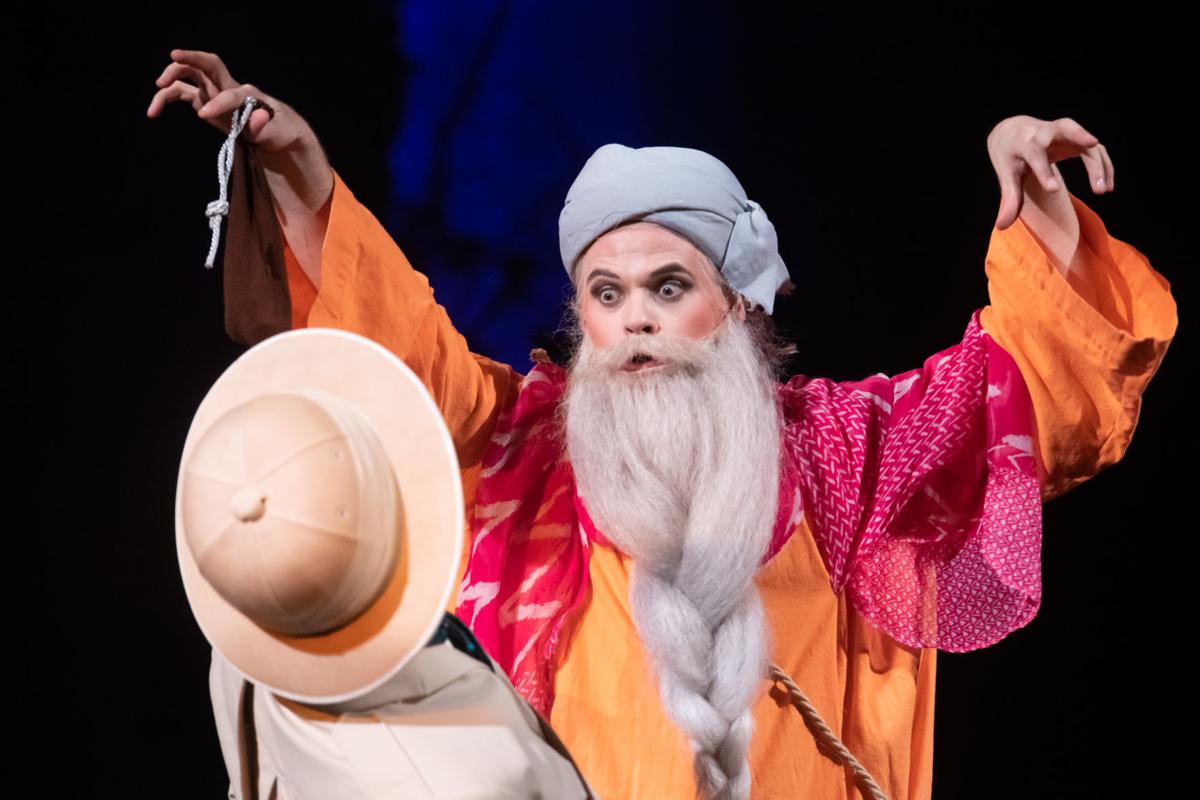 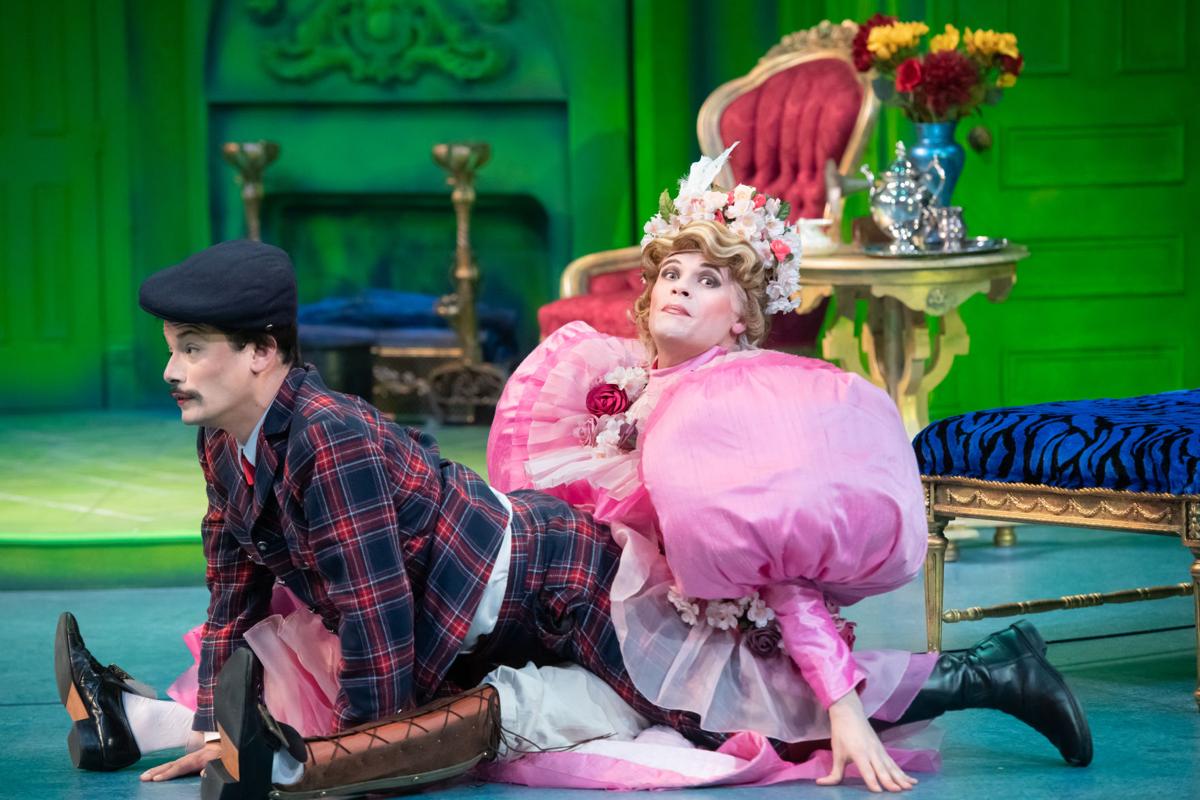 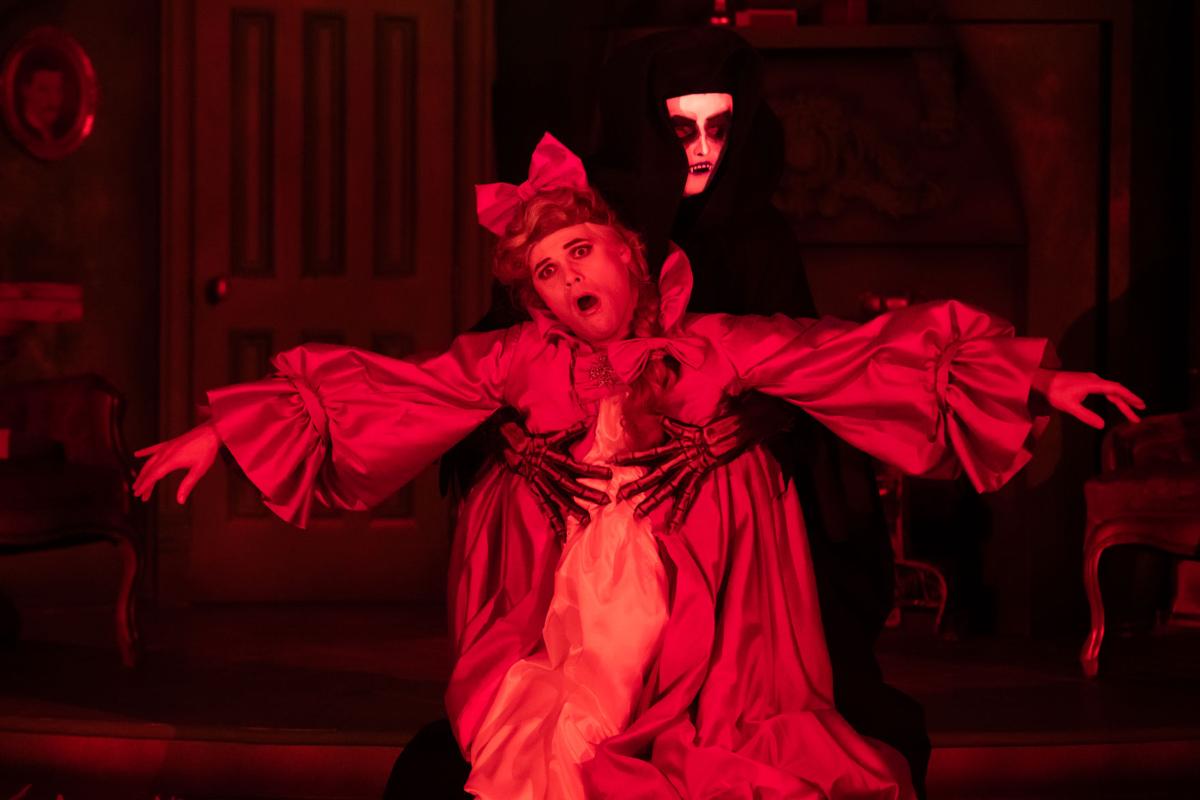 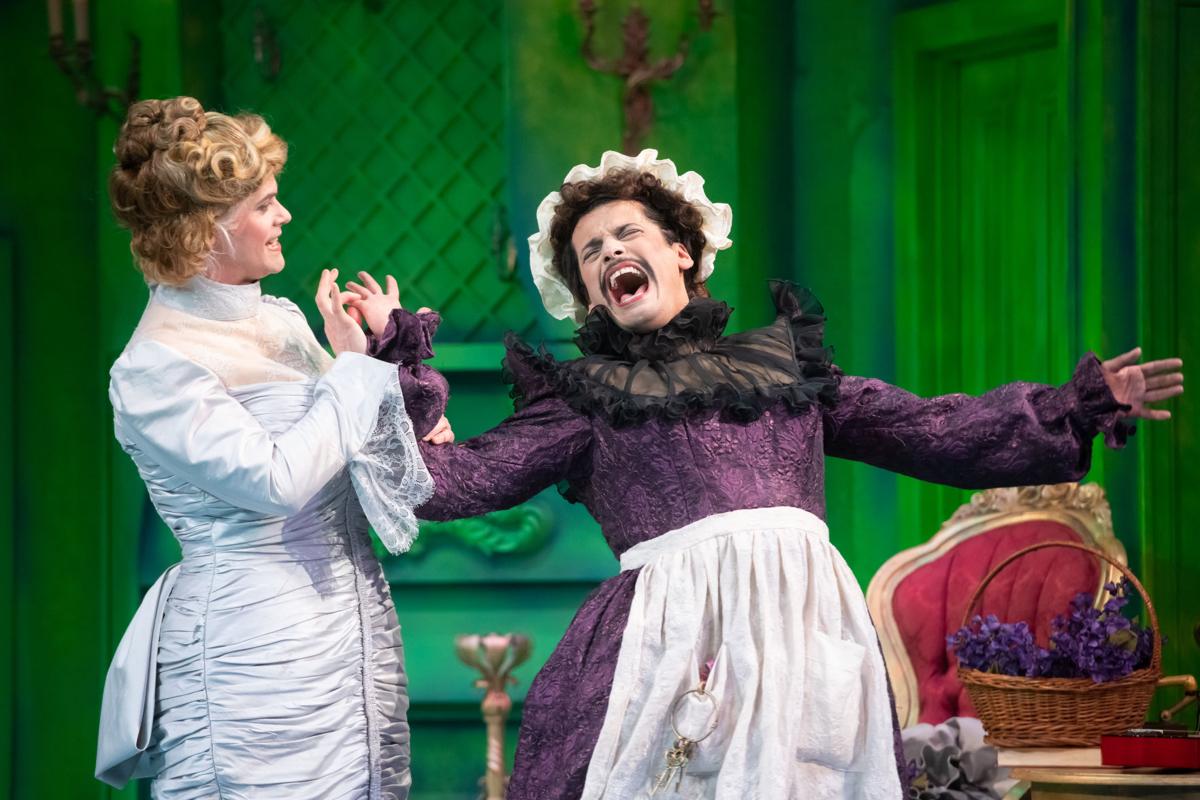 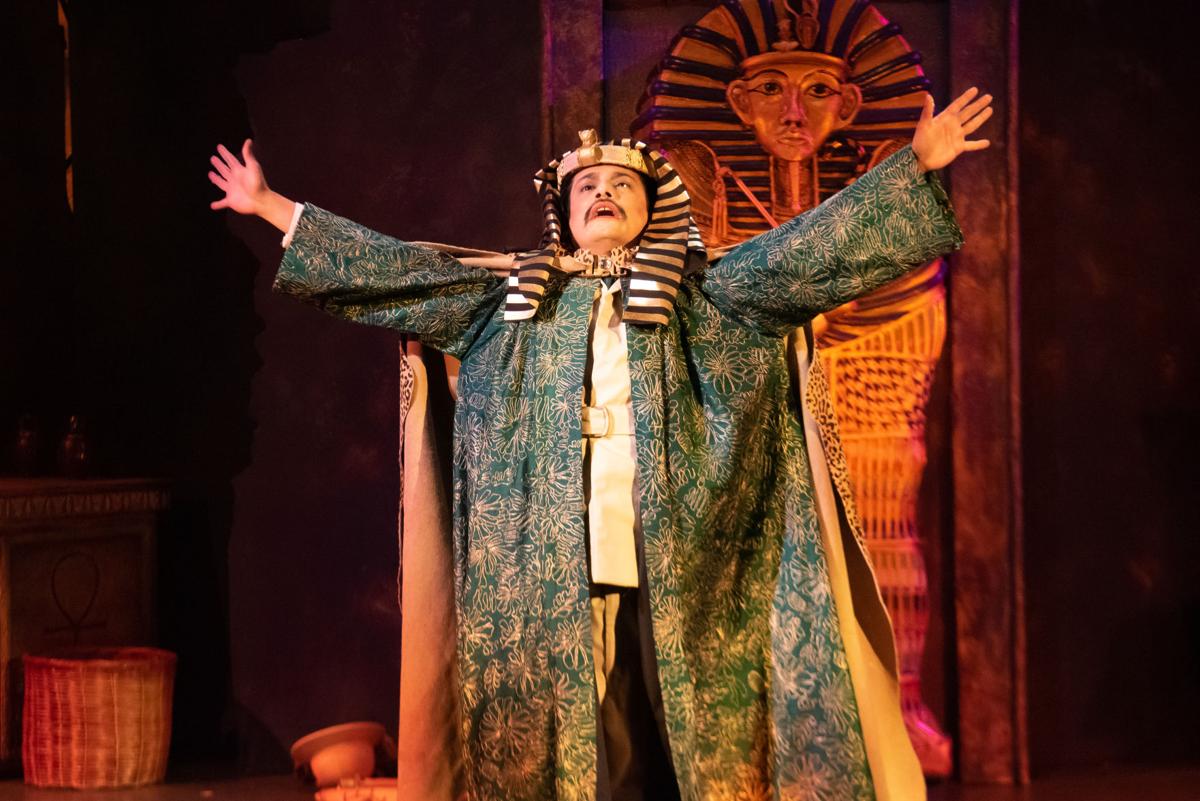 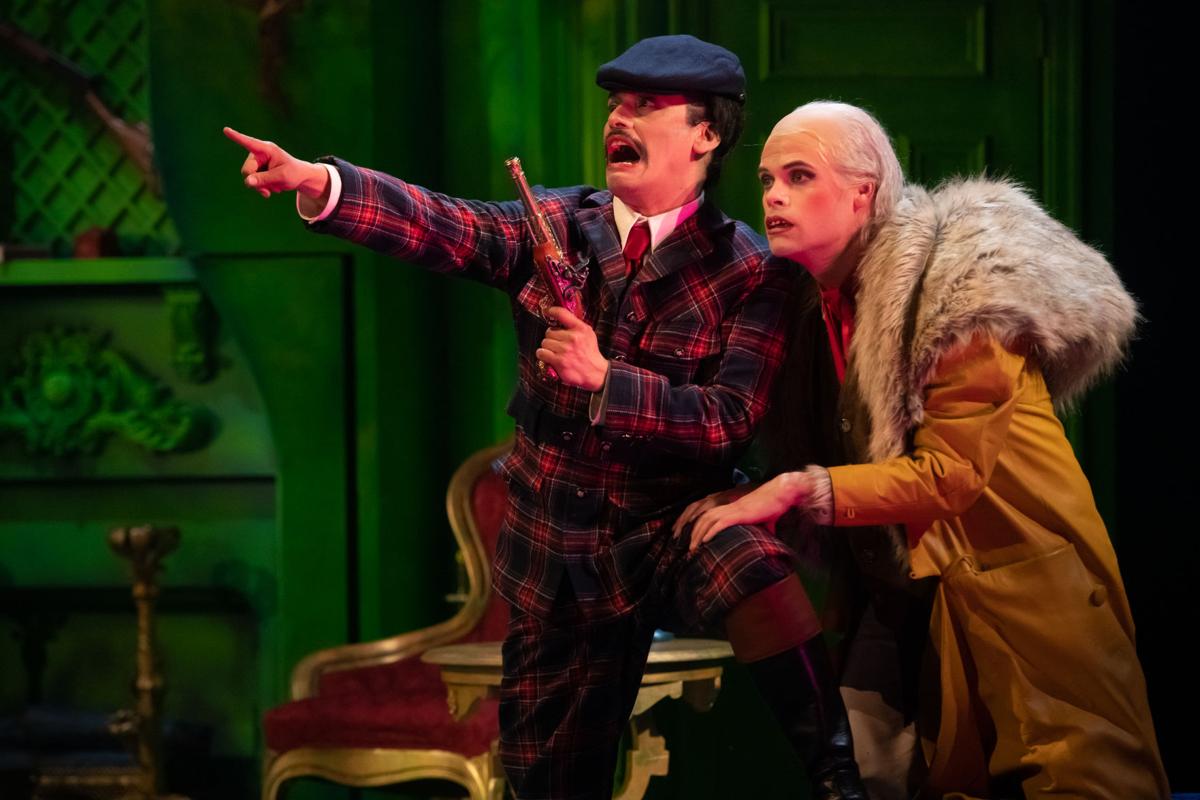 Story: It’s a dark and stormy night at Mandacrest Estate, palatial home of Lord Edgar and his second wife, Lady Enid. The bride is somewhat intimidated by the looming presence of a large portrait of Edgar’s late first wife, Irma Vep, who was murdered along with their only child years earlier.

The estate is cared for by Jane the maid and a ‘swineherd’ named Nicodemus. They’re a mysterious pair, they are, and Lady Enid can’t quite figure out what their story exactly is.

When Lady Enid is attacked one night, Lord Edgar determines that she has been assaulted by a vampire. An Egyptologist by profession, Lord Edgar seeks answers to the maladies which have plagued his and his family’s lives at an ancient Egyptian tomb. He finds a sarcophagus and spirits it away to his home for further inspection.

What precisely is happening at Mandacrest Estate? Will Lady Enid recover from the wounds in her throat? Is Irma Vep really dead? Why does Nicodemus drag one leg when he walks? Why is Jane so peculiar? And what about that creepy portrait of Irma Vep at the top of the stairs? What’s up with that, anyway?

Highlights: The Rep attempts to resuscitate Charles Ludlam’s campy farce from 1984 with a two-person cast who gamely take on eight different characters in an effort to suck every drop of comedy out of the two-act work.

Other Info: Wikipedia reports that The Mystery of Irma Vep was the most produced play in America in 1991, shortly before The Rep itself staged a production directed by Tom Martin in its intimate Studio Theatre.

Vague memories recall that effort as amusing and clever. Like the brilliant Dress the Part, an hilarious, hip-hop riff on Shakespeare’s Two Gentlemen of Verona recently staged by Shakespeare Festival St. Louis at The Ready Room, both of those productions were held in cozier surroundings, bringing the stories closer to their audiences.

The Rep’s current production of Irma Vep seems cavernous on its Browning Mainstage by comparison, losing much of its nuance in the process. Further, for a show that Rep Augustin Family artistic director Hana Sharif describes in program notes as “one of the great comedies of the American Theatre,” this Irma Vep is too often a tired exercise more creaking than creepy or campy.

Much of the problem is the show’s torpid pace, including an interminably long first act which underscores director Nelson T. Eusebio III’s difficulty in finding the quick, zany tempo necessary to facilitate farce. Everything just takes too long to get to where it wants to go, losing some of its audience in the process.

“How do we reinvent the idea of camp for today?,” queries Eusebio in his director’s notes. How, indeed? Dramaturg Finn Lefevre notes that playwright Ludlam, writing at the height of the AIDS epidemic for gays in America, said that his comedy was “a classic tale with creaky doors, a monster in the house...also about people who are trapped – in old fears, old bitternesses.”

Regardless, none of Ludlam’s thoughts about “the monsters in society” make much impact when the story is delivered in such a forced, labored fashion. While much is made about reviving a 35-year-old script, cutting at least 20 minutes from the two-and-a-half-hour presentation and amping up the delivery would help considerably in elevating the camp, the farcical and the nonsensical.

Despite all of that baggage, performers Esteban Andres Cruz and Tommy Everett Russell acquit themselves nicely with humorous portrayals of Lord Edgar, Lady Enid, Jane, Nicodemus, Irma Vep and a few other characters. Substantial credit should go to their dressers, who feverishly remove one costume for another as Cruz and Everett exit as one character and then re-enter as someone else.

Those lavish and amusing costumes are the work of designer Sara Ryung Clement, who captures the spirit of Ludlam’s chaos in her finery. Scenic designer Michael Locher sets the goings-on in an appropriately garish area, dominated by a ghastly green hue and a giant skull at the top of the set. There’s also a weird portrait of good ol’ Irma casting a menacing glance from the top of the stairs, and even a secret dungeon hidden cleverly away behind a balky (on opening night) fireplace.

Marie Yokoyama’s atmospheric lighting and Sharath Patel’s spooky, supportive sound design lend further layers of campy creepiness to the proceedings, so the raw materials for amusement are there. Also present are numerous references to classic horror or suspense works from Shakespeare, Hitchcock, Mary Shelley, Universal Studios and others.

Eusebio does use the large Browning Mainstage to advantage in one scene, as he has his players utilize the aisles for some clever repartee which they then bring back onto the stage. Unfortunately, however, too often this so-called ‘penny dreadful’ moves as sluggishly as Nicodemus dragging his bum leg.

Hopefully The Rep’s presentation of The Mystery of Irma Vep will accelerate in future performances in its attempt to recapture the magic of Ludlam’s quirky piece of horror-inspired silliness.

Play: The Mystery of Irma Vep