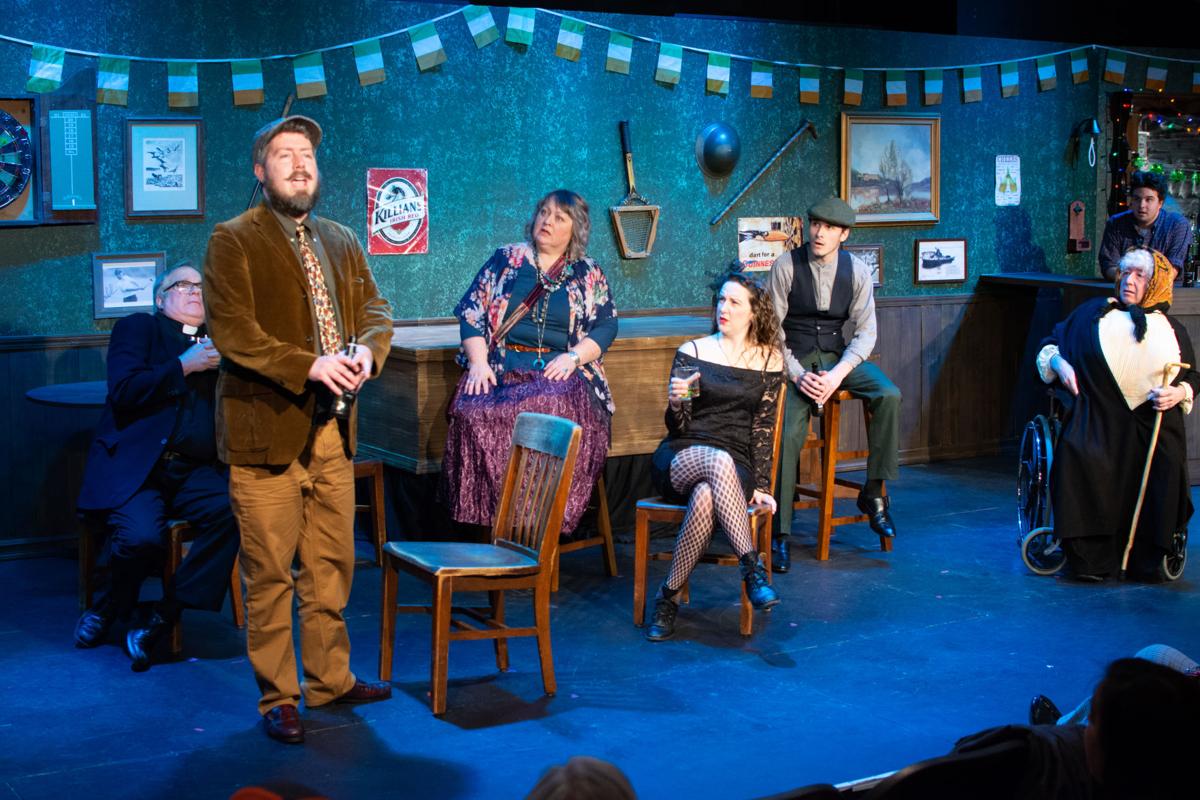 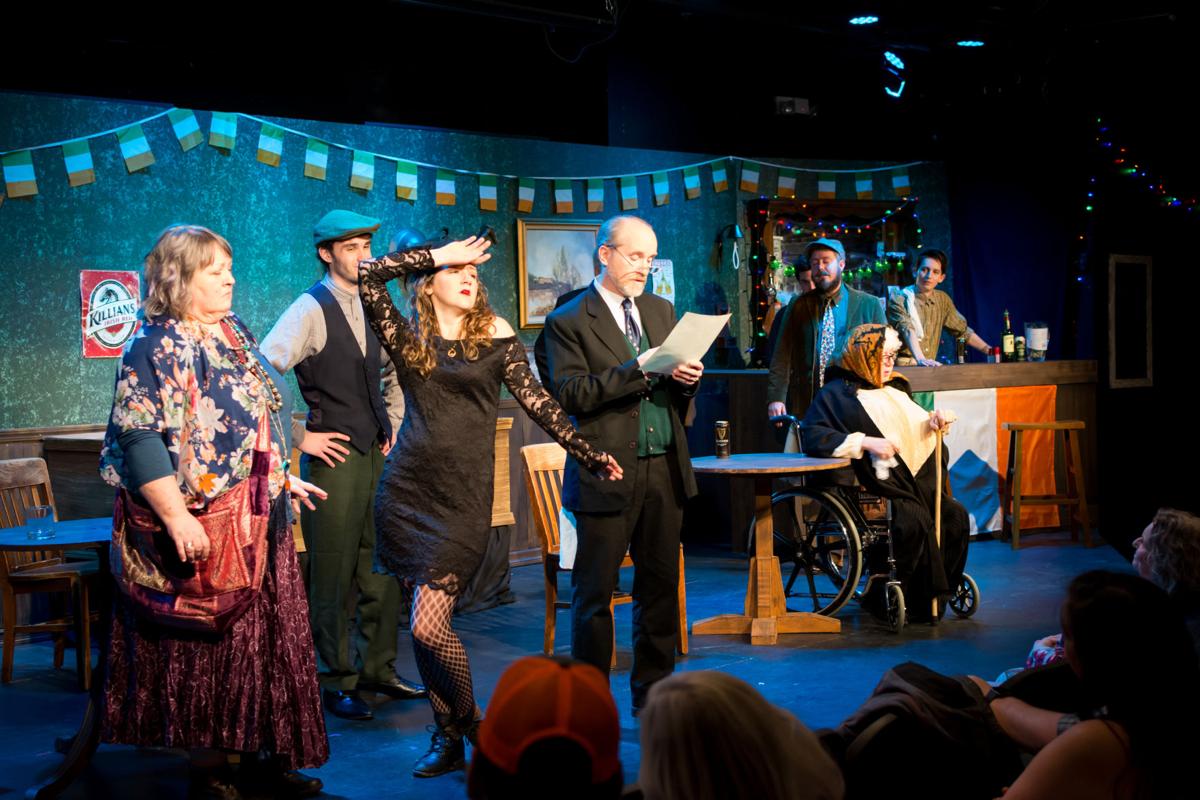 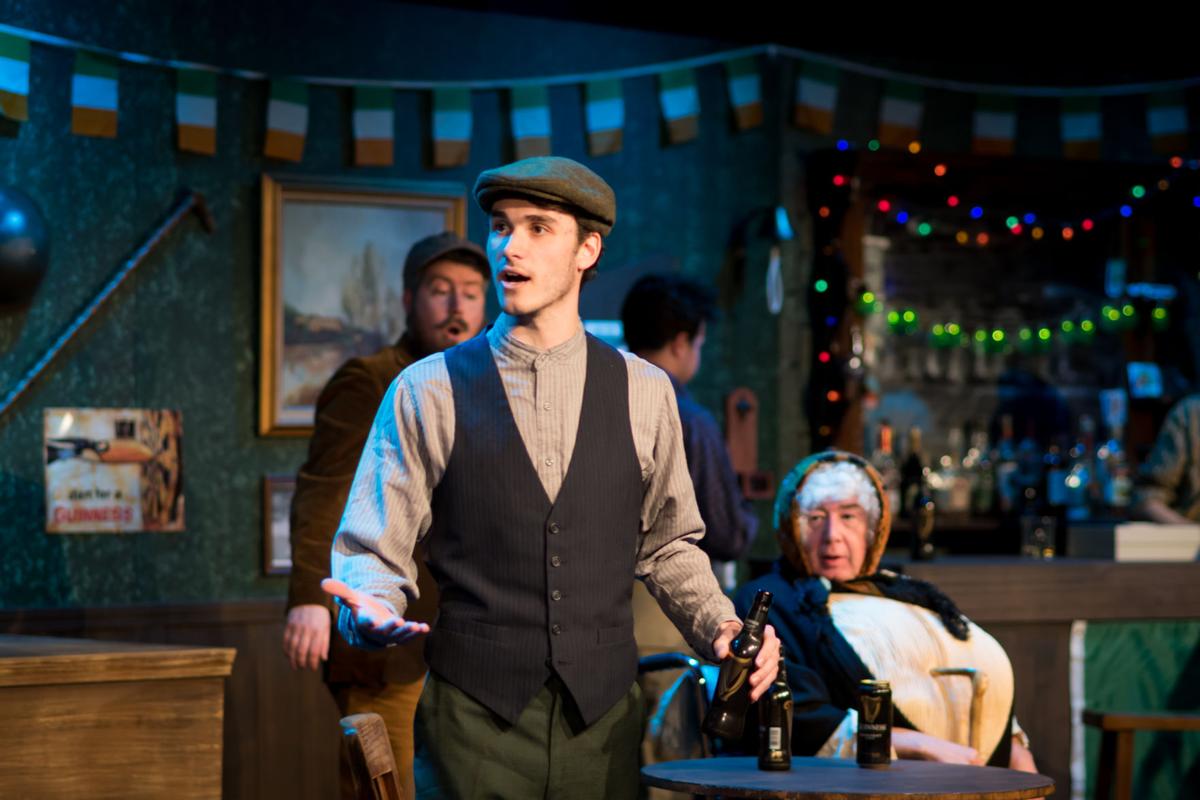 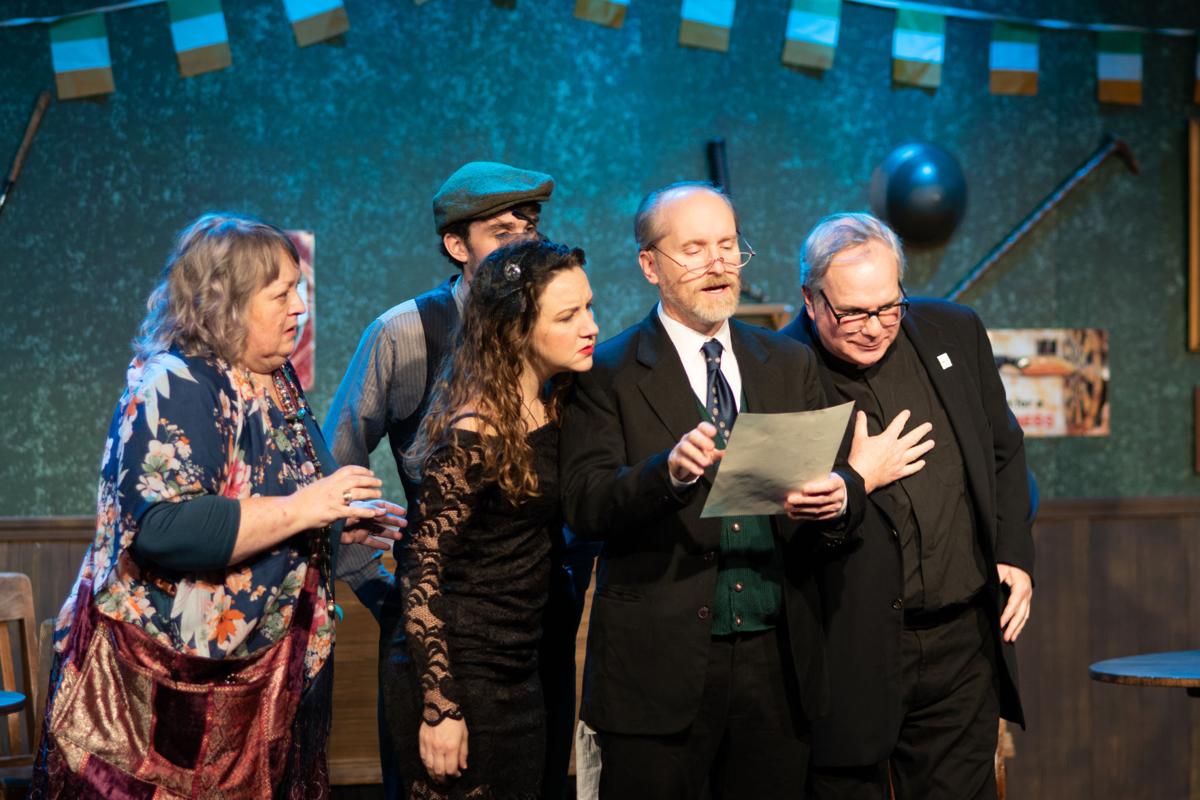 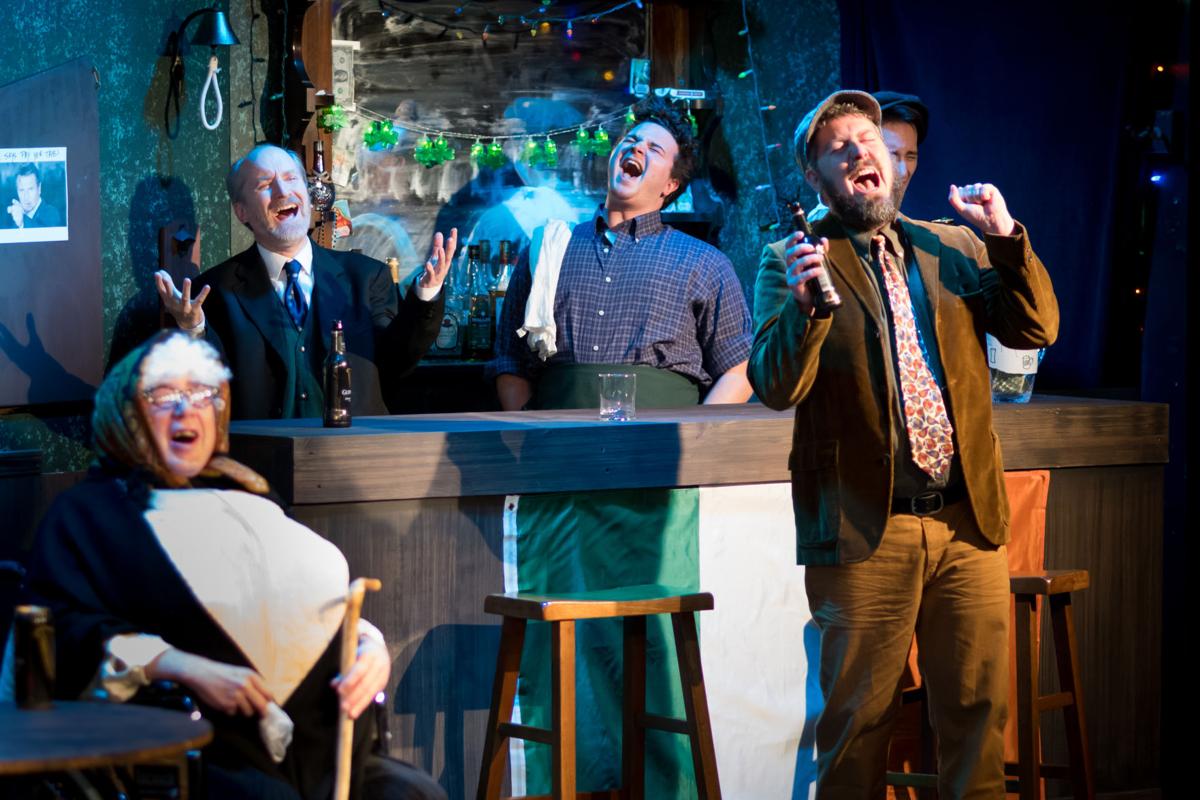 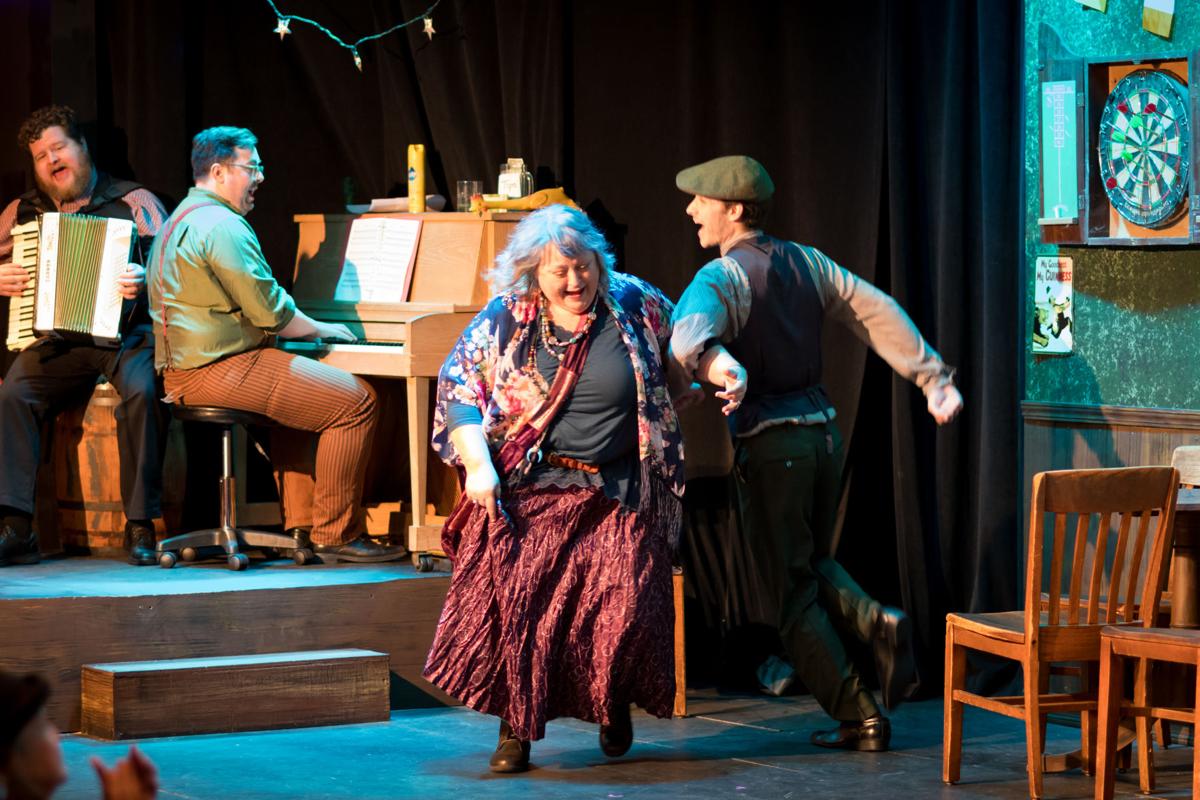 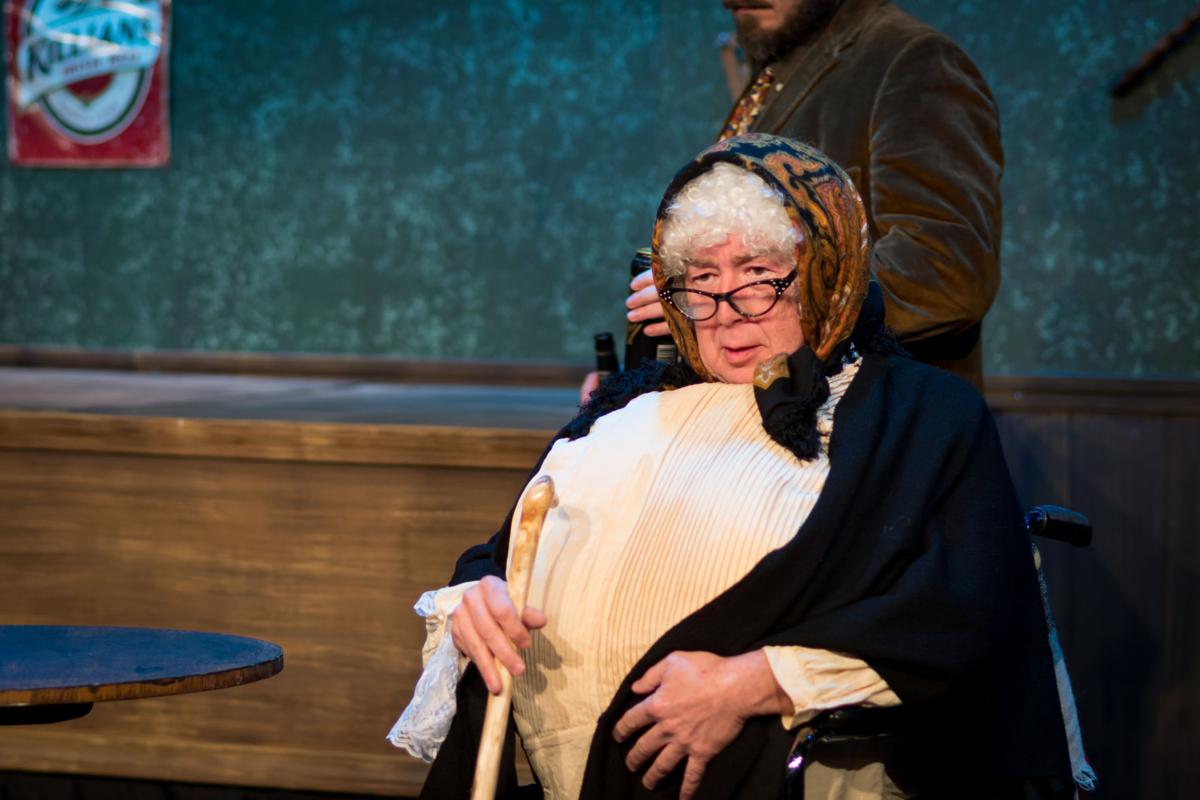 Story: Let’s hear it for Flanagan. An esteemed native of the Auld Sod, Flanagan has gone on to meet his maker. Now, residents of his Irish village have gathered at the local pub, where Flanagan’s closed casket is situated right next to Mayor O’Doul’s bar.

On hand are dear old Mother Flanagan, who speaks a combination of Gaelic and gibberish understood by no one. Flanagan’s ever-patient fiancee of 30 years, Fiona Finn, frequently bursts into a wail of anguish when she isn’t climbing on top of Flanagan’s casket. She loved him so with a fiery passion.

County Sligo’s poet laureate of sorts, Fiona’s brother Mickey, recites an ode to everyone’s favorite pal, while tippling Father Fitzgerald quotes freely from the Book of Kevin, writer of the “fifth Gospel” with a decidedly Irish bent. Brian Bellybunion, noted spinner of yarns, also is in attendance, as well as the local pagan, the appropriately-named Kathleen Mooney. Mayor O’Doul welcomes all of them to his watering hole for toasts to their departed brother.

A pair of bartenders keeps the Guinness flowing freely while the lads and lasses reminisce about their late pal. They all have stories about Flanagan, as apparently do the folks in the audience, who trigger recollections from the villagers with a well-chosen word or two. Tales of Flanagan, begin again!

Highlights: It’s comedy and quenching in equal doses as The Playhouse at Westport Plaza hosts a right proper Irish wake with this amusing and often risque production directed in entertaining style by Lee Anne Matthews.

Other Info: A long-running hit in Chicago, Flanagan’s Wake tests the improvisational mettle of its cast on a nightly basis. Members of the troupe take one- or two-word suggestions from a partying audience and then transform those into comic bits which show just how talented and quick-witted they can be.

Want a drink to get you in the mood? Not a problem, as the bar just outside the Playhouse offers a number of libations which patrons are encouraged to purchase and take into the theater. Not interested in standing in line out there? Just sashay up on stage and buy a pint or whatnot from one of the cast bartenders at Mayor O’Doul’s functioning bar.

A tip of the tweed cap to costume designer Elizabeth Henning, who dresses the pub regulars in their ‘uniforms’ of choice, from Maureen’s comfortable, colorful garb to Fiona’s saucy stylings and Mother Flanagan’s traditional black dress to Mayor O’Doul’s professional attire as the town’s political chief.

The blarney is piled high and deep, thanks to Brett Ambler, whose genial Brian Bellybunion is more than equal to the task of weaving tall tales on the spot based on just a word from a tipsy audience member, and rhyming to boot. Blindauer makes Father Fitzgerald an amusing sort, too, rambling on in his illogical but high-spirited way while sneaking shots from his flask.

Teresa Doggett is a hoot as Kathleen, who is warily respected by the townsfolk for her expertise with ‘dark’ subjects, and Lynn Berg handles the role of the ‘serious’ Mayor O’Doul with elan, setting up the humor in other characters.

Dustrin Petrillo shines as the amiable County Sligo ‘writer,’ Mickey Finn, while Bill Burke is fitfully funny as weird and wired old Mother Flanagan. Jennifer Theby-Quinn puts her abundant comic skills to accomplished use as the easily aroused Fiona, she of the looong engagement to Flanagan.

Sean Seifert, Janelle Pierce and Matt Billings are the cordial trio of bartenders serving the characters as well as thirsty patrons who venture on stage.

Director Lee Anne Matthews keeps the performance moving at an easy clip, no small feat considering the quantity of improvisation demanded of the cast. The show features music by Bonnie Shadrake, lyrics by Shadrake and Jimmy Binns and was conceived by Jack Bronis. It was created by Binns, Bronis, Shondrake, Amy Binns-Calvey, Geoff Binns-Calvey, Mark Czoske, Phil Lusardi and Patricia Musker.

Due to the improv efforts of the cast, every performance is certain to be a bit different. What’s consistent at Flanagan’s Wake is the amiable good time this funny collection of performers doubtless delivers to its audience.

Venue: The Playhouse at Westport Plaza