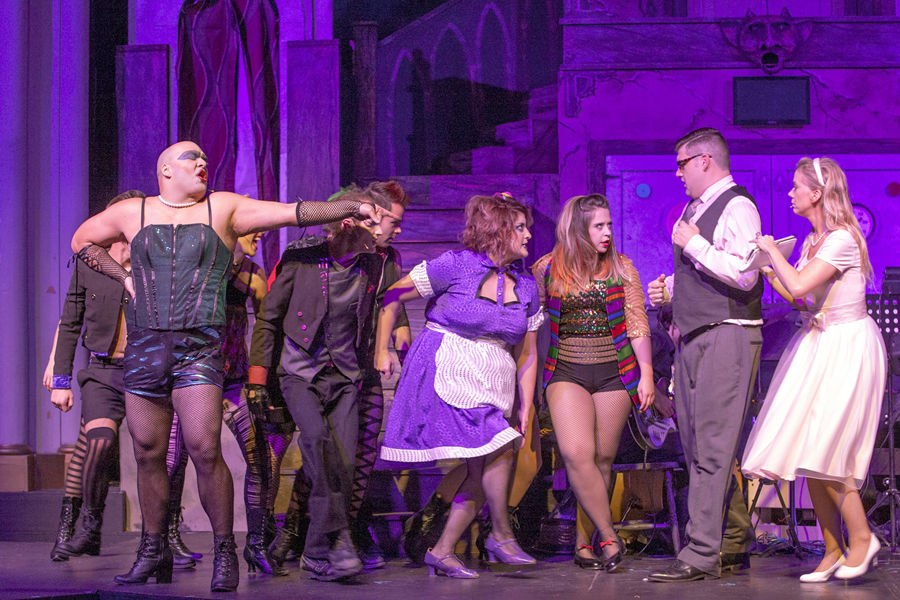 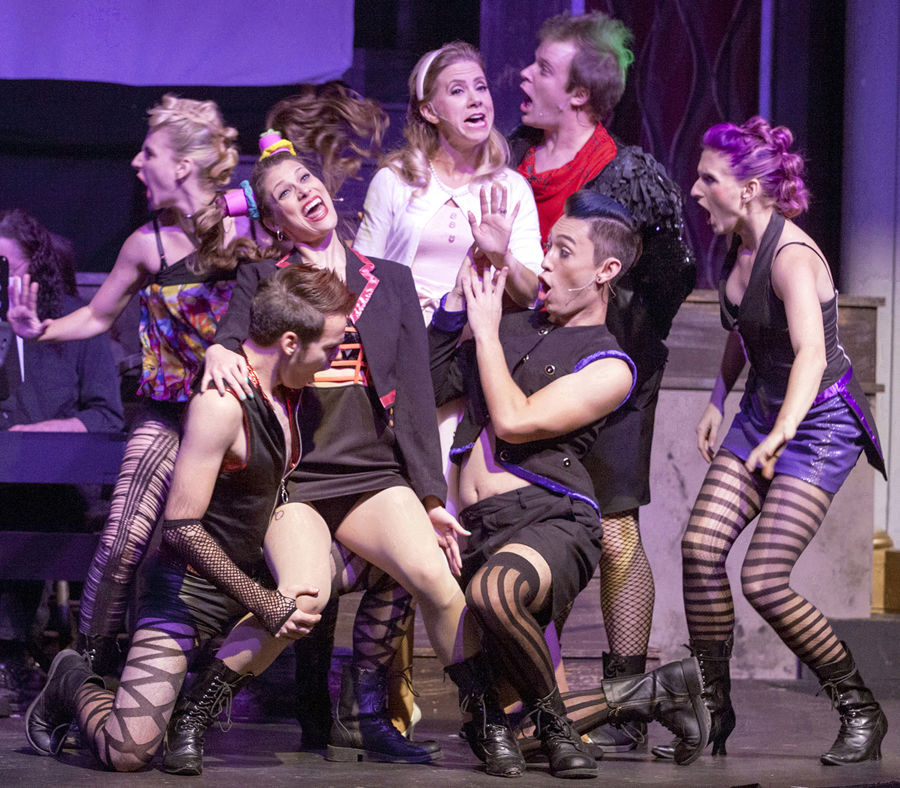 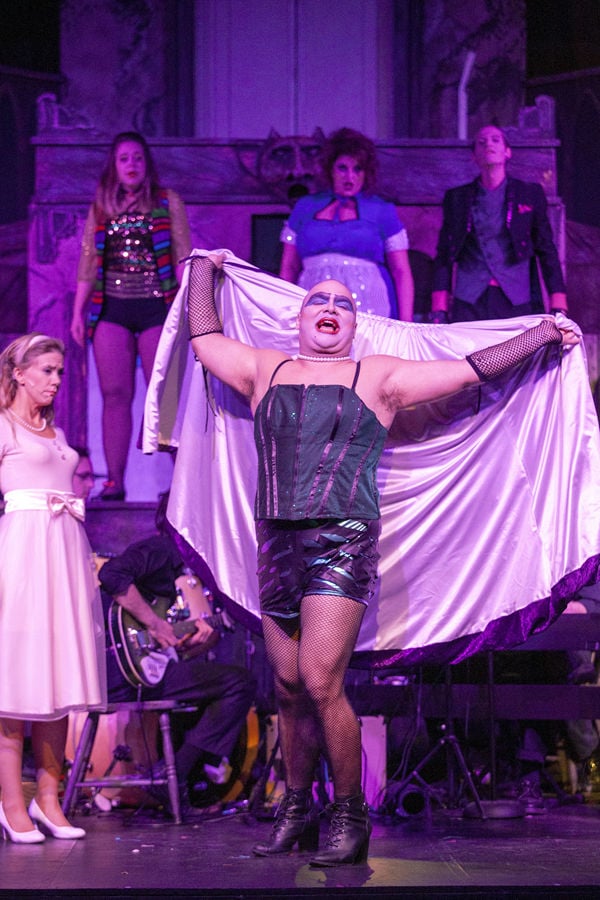 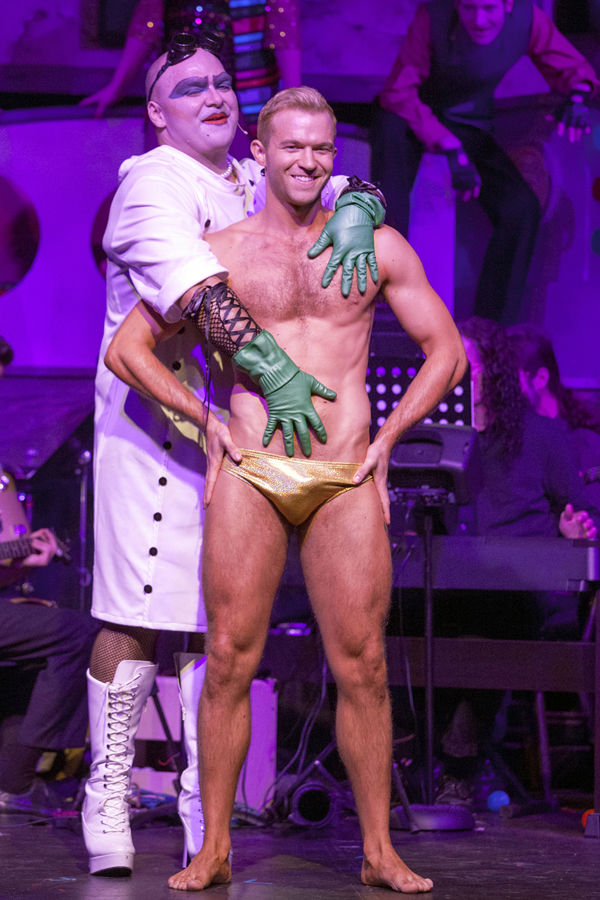 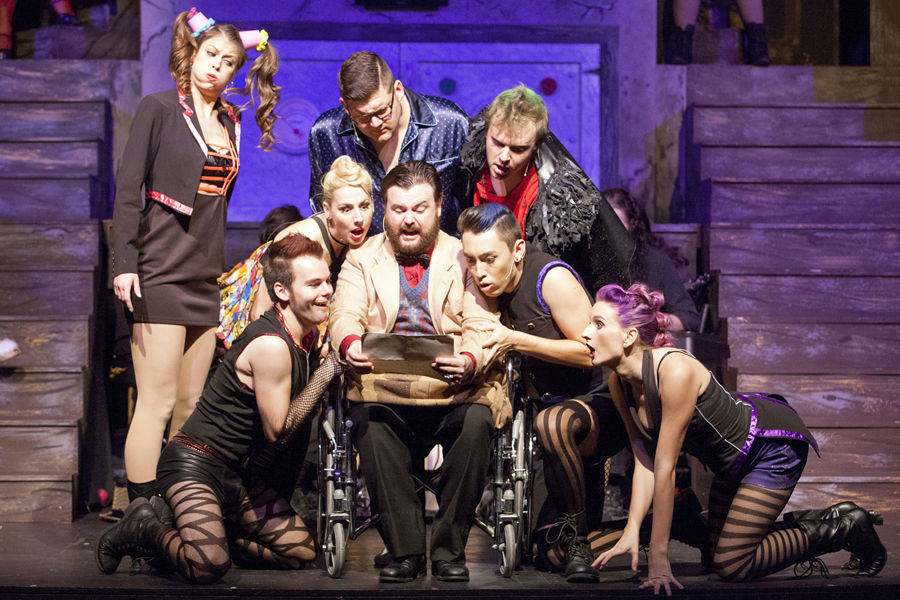 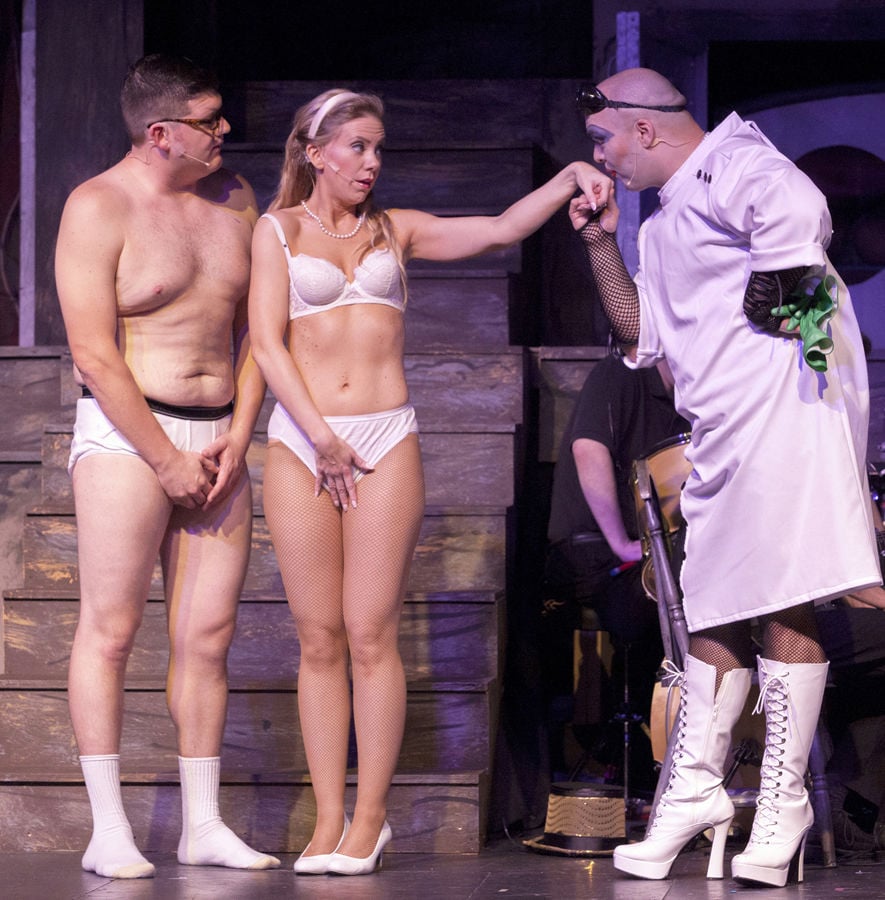 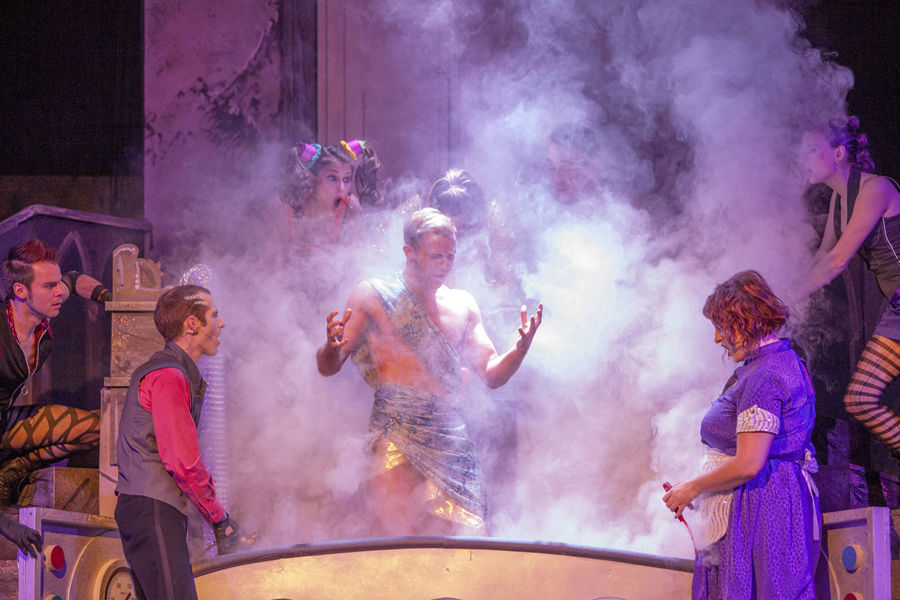 Story: While an usherette cleans a 1960s movie house, a narrator appears and tells the tale of Rocky Horror: Brad and Janet are heading to the home of their old high school science teacher, Dr. Scott, when their car has a flat tire in the rain. They’ve come from the wedding of high school friends and also have just become engaged to each other. They arrive at an old castle outside Denton, Ohio, where they are ushered in by a creepy butler named Riff Raff.

Soon they are welcomed by the lord of the manor, Dr. Frank N. Furter. He’s a bit strange, as are the maid Magenta and a young woman named Columbia. Soon enough, Brad and Janet learn that a delivery boy named Eddie is held captive there and are horrified when Furter hacks Eddie to death.

When Dr. Scott unexpectedly arrives unexpectedly in search of his missing nephew Eddie, Riff Raff and Magenta warn the visitors to leave the castle, which actually is an alien space ship, as they return to their planet against the wishes of Frank N. Furter. The story’s narrator wraps up the bizarre tale as the usherette returns to her chores in the empty theater.

Highlights: Just in time for Halloween, Stray Dog Theatre revives the cult classic, The Rocky Horror Show, and does so in a big, splashy and rowdy manner. Associate artistic director Justin Been pulls out all the stops with this grand and glorious paean to the horror and sci-fi flicks of half-a-century ago.

Been and company add a heavy dose of wild sexual activities and infectious energy that play to the boisterous, raucous audiences who love their Rocky Horror with all its musical and comic mayhem.

Other Info: Richard O’Brien wrote the book, music and lyrics for this campy musical comedy that opened in London’s West End in 1973 and ran for nearly 3,000 performances before closing in 1980. Its Broadway version in 1975 wasn’t nearly as successful, closing after less than 50 performances, but the 1975 film version remains a fan favorite to this day.

Stray Dog’s production is inspired and invigorating. Before the show and during intermission, Been has put together a nifty series of old movie trailers touting the terrors of ghastly beasts such as giant ants or hostile aliens, mostly in glorious black and white. For intermission, you can count down the minutes to Act II along with the animated characters on screen hawking concessions available in the lobby.

Rocky Horror draws an exuberant, festive crowd that is encouraged to shout out colorful nouns for Brad and Janet whenever their names are mentioned and even to enhance the plot. The back page of the program, however, lists specific instructions about protocol lest the more frenzied get carried away.

Been has situated the band right in the middle of all the action, where they play the rollicking score impervious to the antics around them. Led by musical director Chris Petersen, the inspired combo includes guitarist AJ Lane, drummer Bob McMahon, M. Joshua Ryan on bass and Petersen at the piano.

Robert Lippert’s scenic design wistfully includes a back screen for the movie projections as well as a very cool whizbang of a sci-fi machine cleverly situated behind a curtain early in the show. Add assorted bits of smoke and fog, strobe lighting and other devilish lighting effects courtesy of Tyler Duenow and a ragtag collection of garish and misfit costumes from designer Eileen Engel and you have the makings for a rollicking good time.

Michael Juncal pays right proper homage to Tim Curry (the original Frank) as the high-heeled, makeup-manic Frank N. Furter, seducing both Brad and Janet by night while welcoming the duo to his lair with his saucy Sweet Transvestite number in deliciously decadent fashion.

Corey Fraine is a hoot as the scheming Riff Raff, leading the company on its inspired rendition of the show’s signature number, The Time Warp, accompanied in suitably droll fashion by Maria Bartolotta as Riff’s sister Magenta and Sara Rae Womack as good-time girl Columbia.

Gerry Love commands attention as the stiff-upper-lip, military narrator who recounts this saucy cautionary tale with ramrod posture and nary a smile, while Bartolotta doubles as the vapid movie house usherette who introduces the evening with the plaintive tune, Science Fiction.

Luke Steingruby wears little more than a smile (but it’s a nice smile) as Frank N. Furter’s lust-inducing and surprisingly thoughtful creation, the title character, while Michael Wells doubles as the ill-fated Eddie and the wheelchair-bound scientist, Dr. Scott, who may have secret ties to the FBI.

Been fills the stage with a sextet of head-bopping, gyrating players known as the Phantoms, played grandly by Angela Bubash, Ted Drury, Stephen Henley, Tim Kaniecki, Sarah Polizzi and Dawn Schmid. Choreographer Zachary Stefaniak Shaffner keeps the Phantoms and other players cruisin’ around the set in humorous, high-octane fashion.

Although Rocky Horror has been around for more than 40 years, Been makes this risqué and bawdy valentine to cheap and sensational sci-fi flicks fresh and full of fun. You might even be inspired to dance to the Time Warp again.