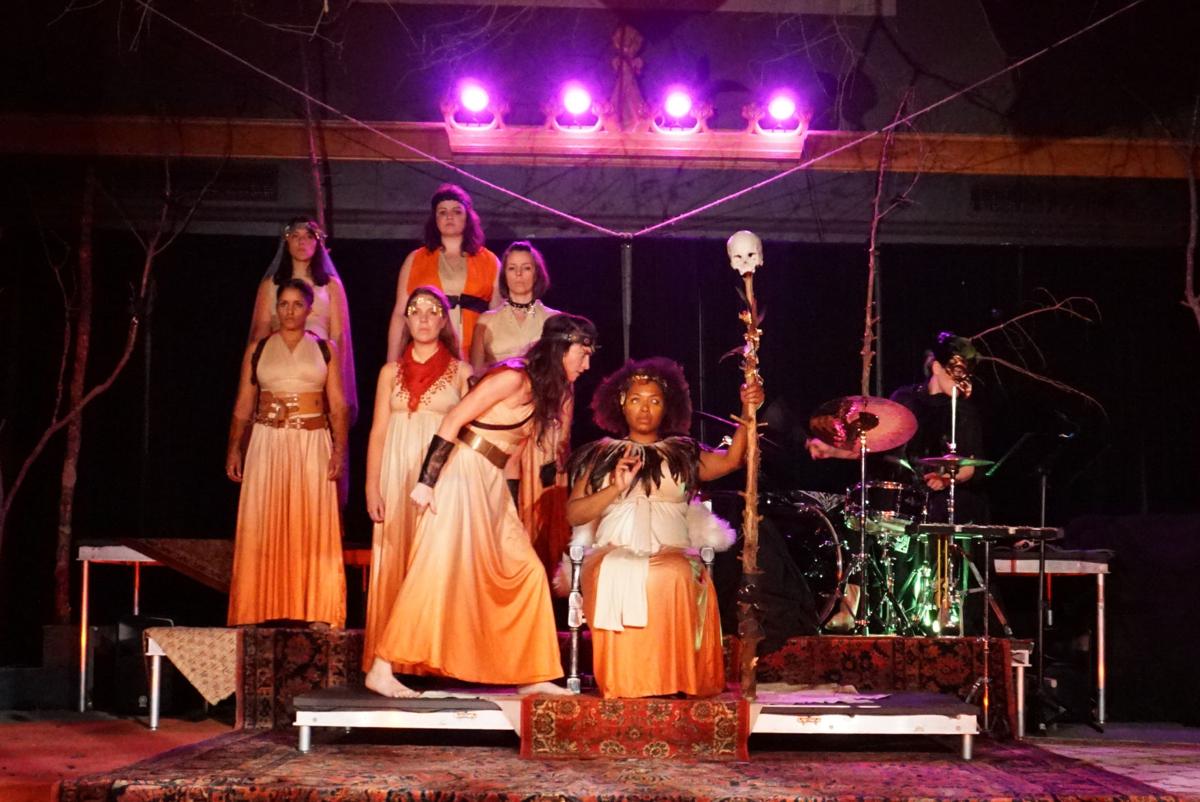 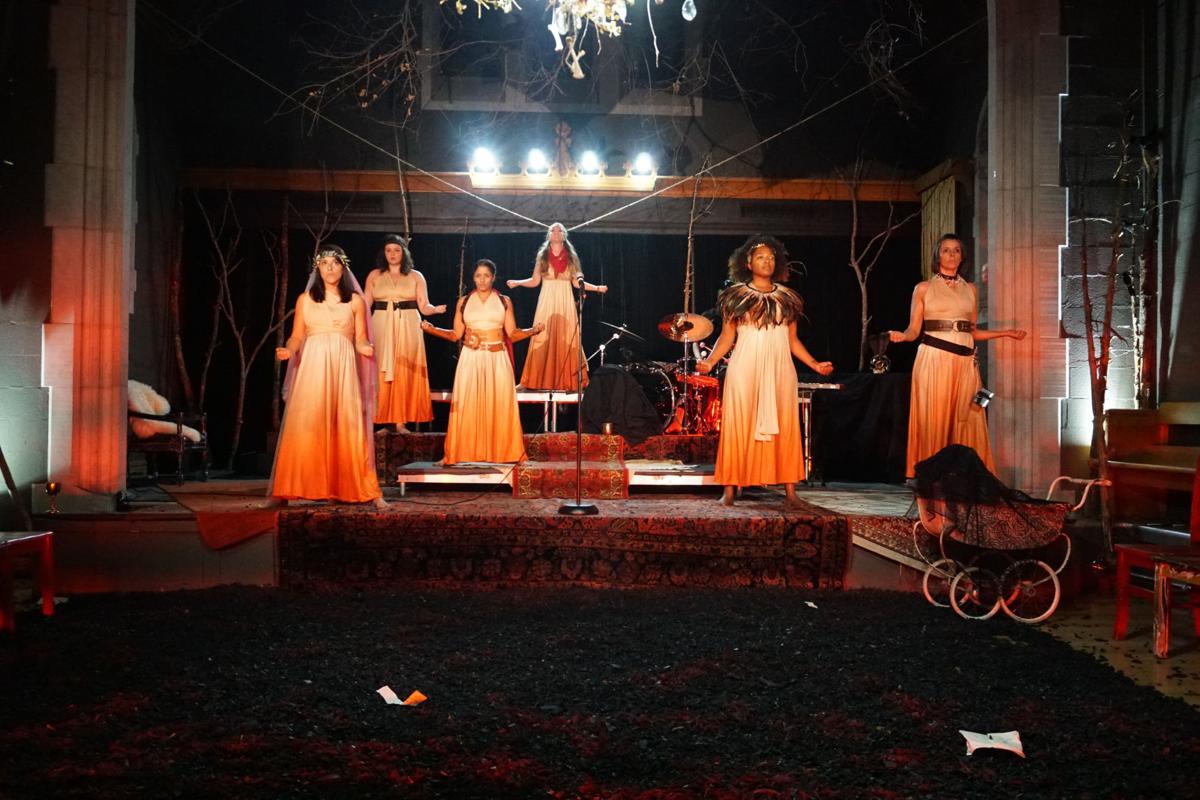 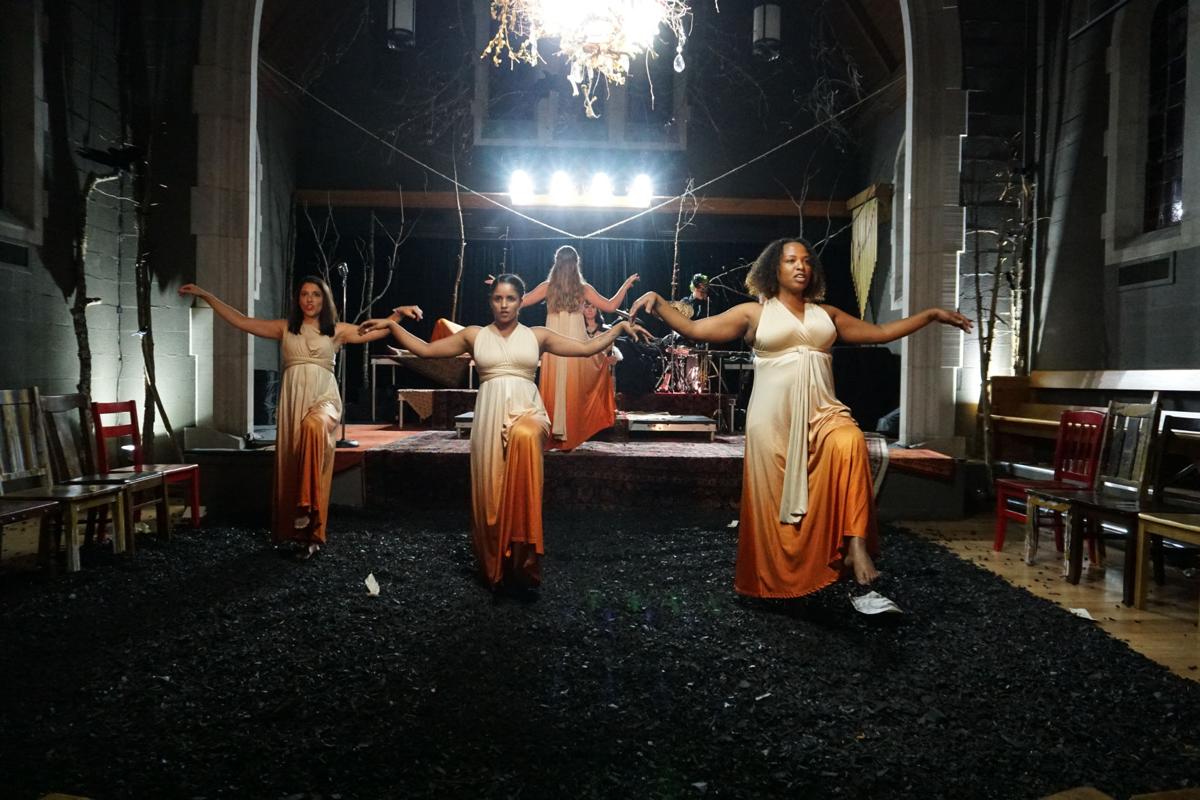 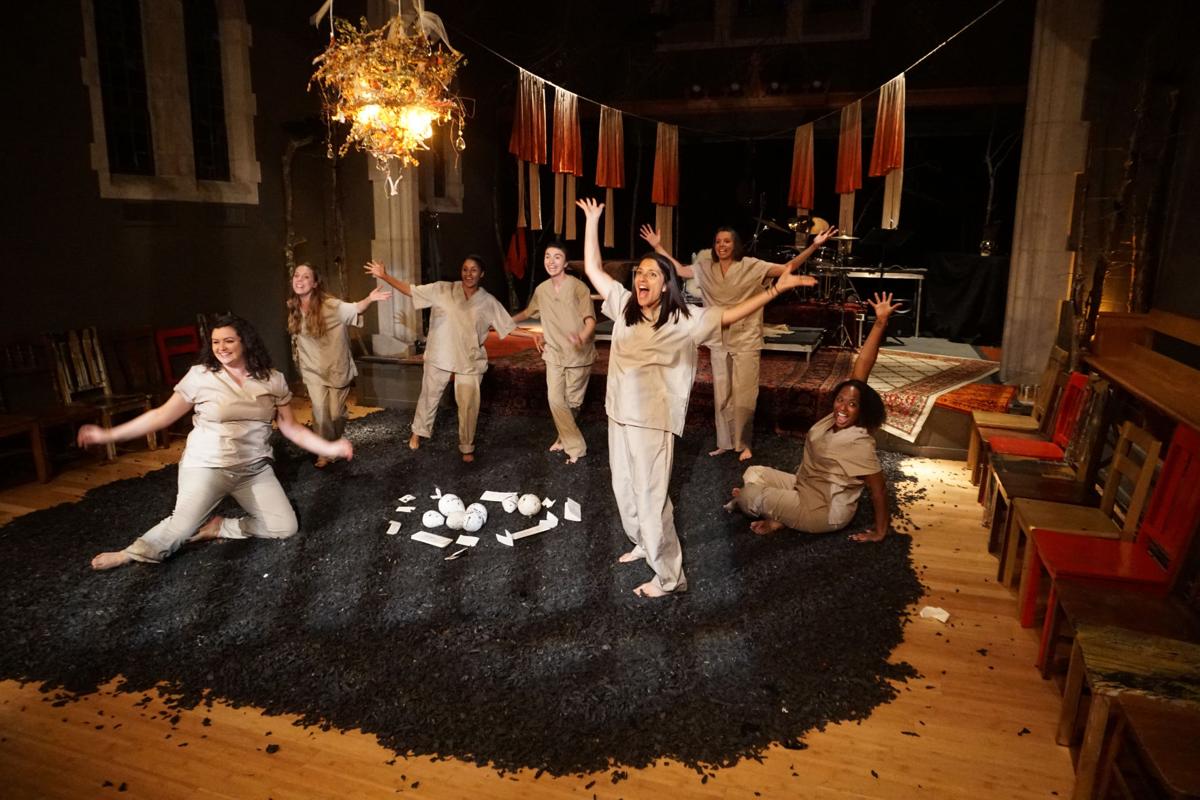 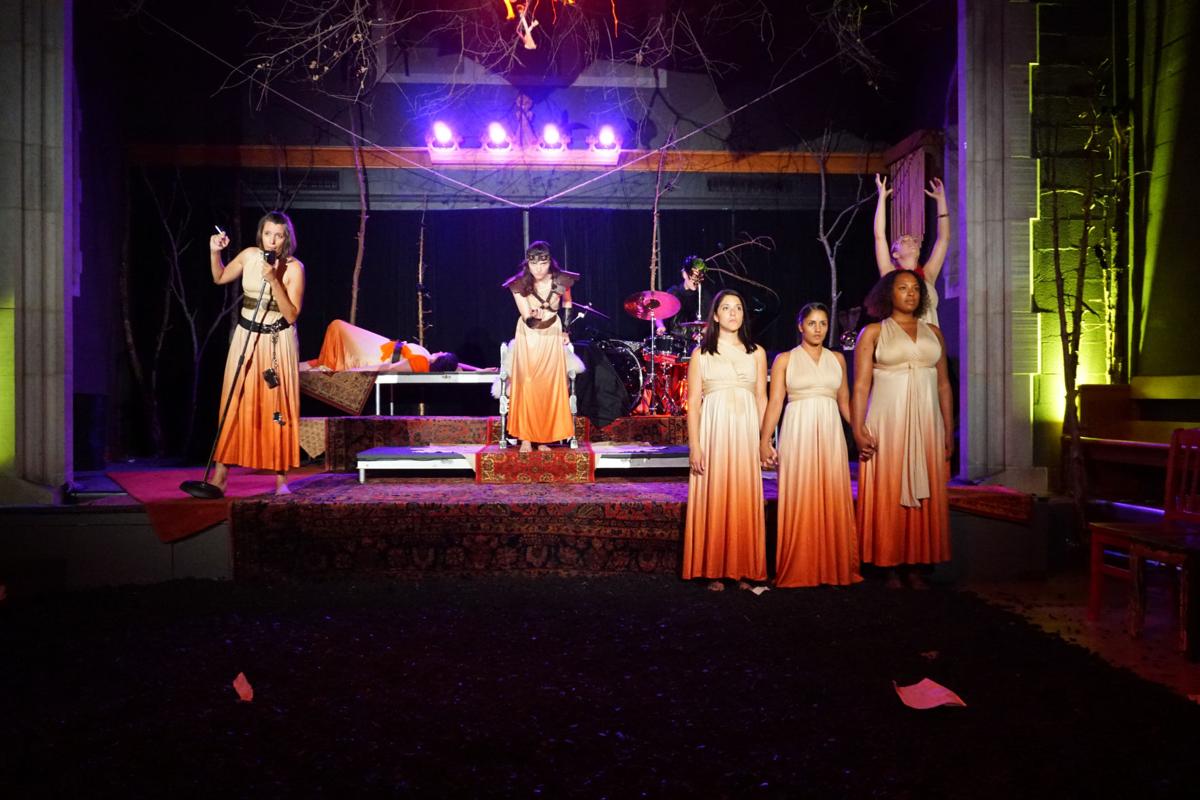 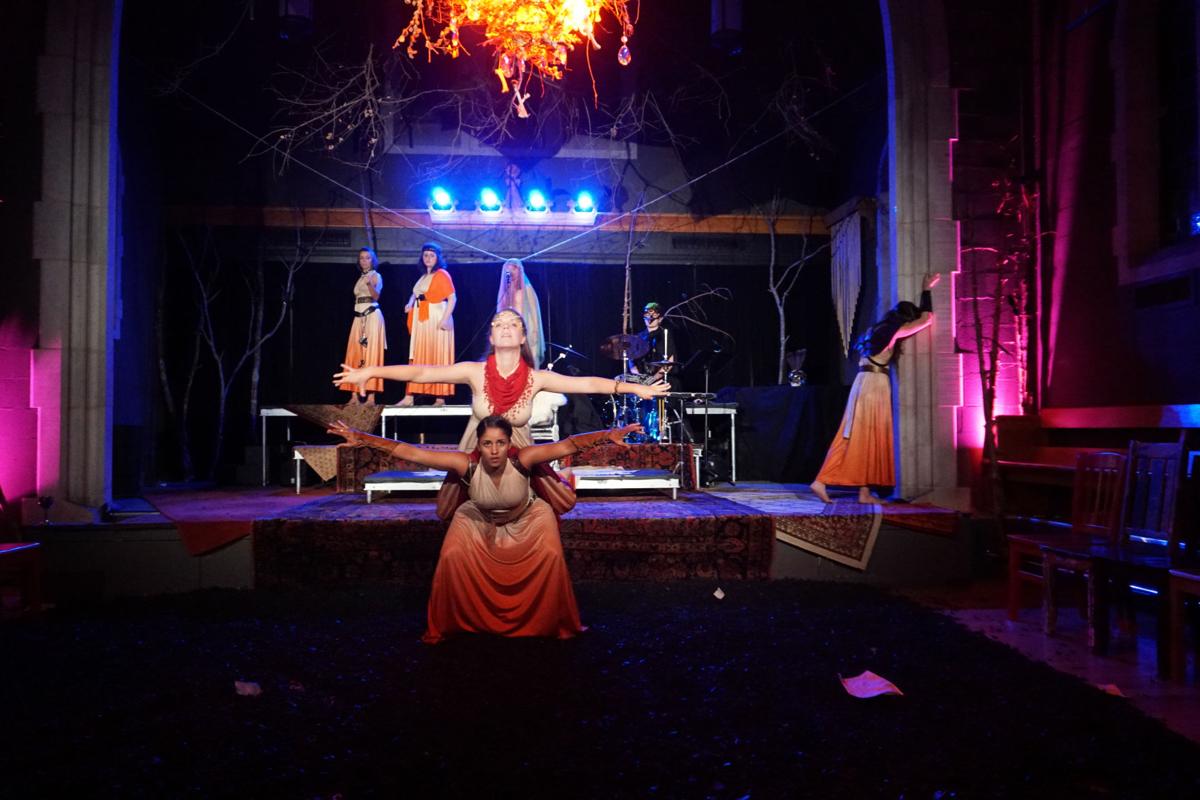 Story: Two theater companies collaborate on a modern interpretation of the classic Greek tragedy, Antigone. Seven different women portray Antigone, the title character in Sophocles’ ancient play, in a fresh perspective which the companies note “explores themes of fidelity, citizenship, civil disobedience, and the struggles and consequences the characters within the world of the play encounter as a result of their choices.”

In Sophocles’ original play, Antigone is sentenced to death by her uncle, King Creon, after she disobeys his edict that the body of her dead brother Polynices remain unburied on the battlefield, to be prey for carrion and the object of public shame.

Polynices and his brother Eteocles had fought on opposite sides in the Theban civil war, killing each other as they battled for control of Thebes. After the battle, the newly crowned Creon declared that Eteocles should be honored in death but that Polynices be scorned. Antigone implores her sister Ismene to help her bury their reviled brother, but Ismene timidly refuses.

When Creon learns what Antigone has done, he confronts her, only to hear her say that he is immoral and that she has chosen to obey divine law instead of his decree by burying Polynices. Creon then attempts to bury Antigone alive in a cave, but in the process angers his own son Haemon, her fiance.

When Creon is warned by the blind prophet Tiresias that he must appease the gods, who are displeased with the king’s actions, by freeing Antigone, he waits too long before reluctantly agreeing to do so. Antigone subsequently hangs herself, leading to Haemon’s own self-inflicted death and to the suicide of Creon’s wife, Eurydice.

Highlights: Director Lucy Cashion and her cast offer a spirited variation on the familiar Greek tale which opens the classic tragedy to contemporary analysis and understanding.

Other Info: This version of Antigone, presented as part of SATE’s Season of Ritual, has been in the works for the last few years. As the two companies note in their joint news release, “In 2017, Prison Performing Arts (PPA) began a collaboration with Saint Louis University (SLU) Department of Fine and Performing Arts.

The release continues, “The group studied, explored and wrote about the ancient Greek Princess Antigone. Antigone’s story of fighting civic law to obey divine law became famous in the classical Greek tragedy, Antigone, which premiered in Athens in 441 BC. Since then, scholars, poets and playwrights have written their own translations, adaptations and critiques of the Antigone story, each from a different point of view.

“The continuation of this tradition resulted in a new version of Antigone, which was performed in October 2017 by SLU theater majors in St. Louis and then with a performance by PPA participants at WERDCC in March 2018. The collaboration now continues with this ERA/SATE co-production in St. Louis.”

This first professional production of the collaboration features Miranda Jagels-Felix and Victoria Thomas, both of whom performed in the SLU production, as well as Laura Hulsey, who was a member of the WERDCC version. Hulsey, who was released from WERDCC in 2018, makes a most impressive professional acting debut in this latest incarnation of Antigone: Requiem per Patriarchus.

Each of those three performers portrays Antigone in the first half of this 90-minute, one-act effort, which is stylishly and cleverly directed by Cashion. In addition, the cast includes Alicen Moser, Taleesha Caturah, Ellie Schwetye and Natasha Toro as others in the title role.

All seven performers take on other assignments, too, when this version of Antigone more or less follows the original story in its second half. Moser portrays Creon; Thomas plays Ismene; Hulsey is Haemon; Caturah has the role of Tiresias; Schwetye assumes the role of Cerberus, the three-headed dog who guarded Hades; Toro is Eurydice and Jagels-Felix alone has the role as Antigone.

Toro, Caturah, Hulsey, Schwetye and Marcy Ann Wiegert comprise the members of the Greek chorus who taunt Creon, while Wiegert provides musical accompaniment as the show’s percussionist, dressed in a funky ceremonial mask courtesy of costume designer Liz Henning, who also decks out the myriad Antigones in similar garments.

Not sure why Cerberus makes an appearance, other than to give Schwetye an opportunity to display her comic chops, which she also does convincingly as a deadpan, stand-up comic who comments on the goings-in with a litany of truly terrible, and very funny, puns while evincing nary a smile.

Cashion’s sound design is a potpourri of pop, rock, Broadway and classic melodies, even tossing in a Gregorian chant for effect. Her set design utilizes both the floor and stage at The Chapel, the former of which allows the sundry Antigones to banter with the audience while the latter serves as Creon’s palace, with Wiegert’s drums at stage left. Erik Kuhn contributes the highly effective lighting.

There’s something for everyone in the script and on the set, including some kind of eggs which Schwetye meticulously adds to an overhanging nest in the course of the show. Interpret if you dare.

Cashion’s excursions into the classics, including Oedipus Rex, Doctor Faustus and Macbeth, are always highly imaginative and more than a touch confusing to at least one person in the audience. The intriguing Antigone: Requiem per Patriarchus fits the mold.