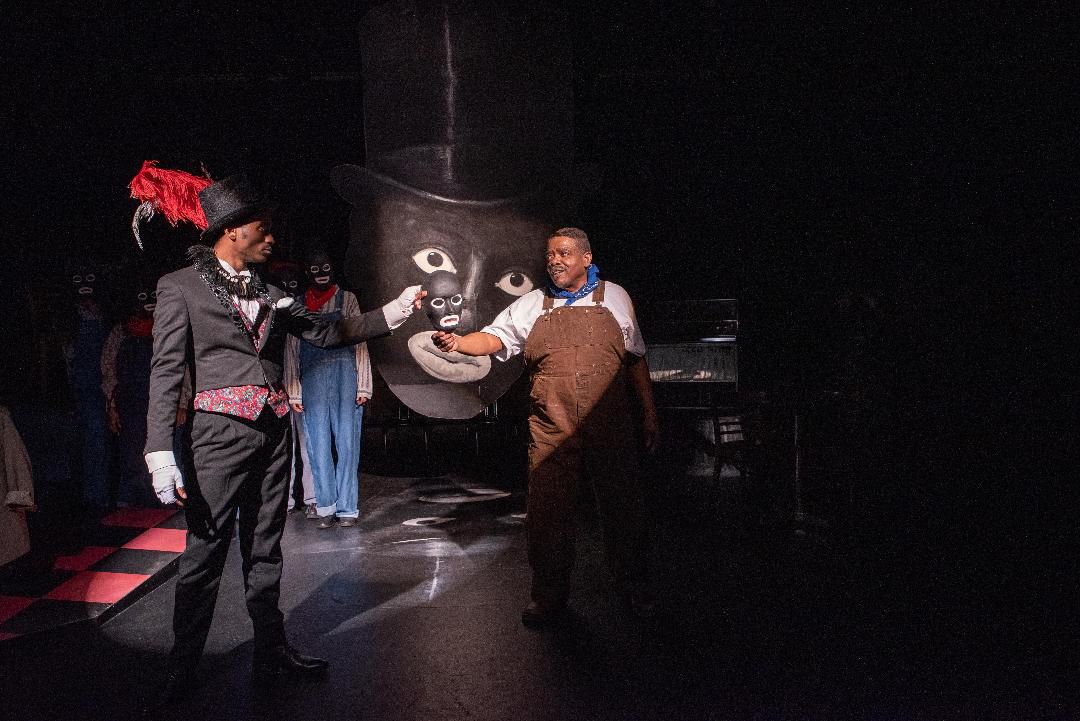 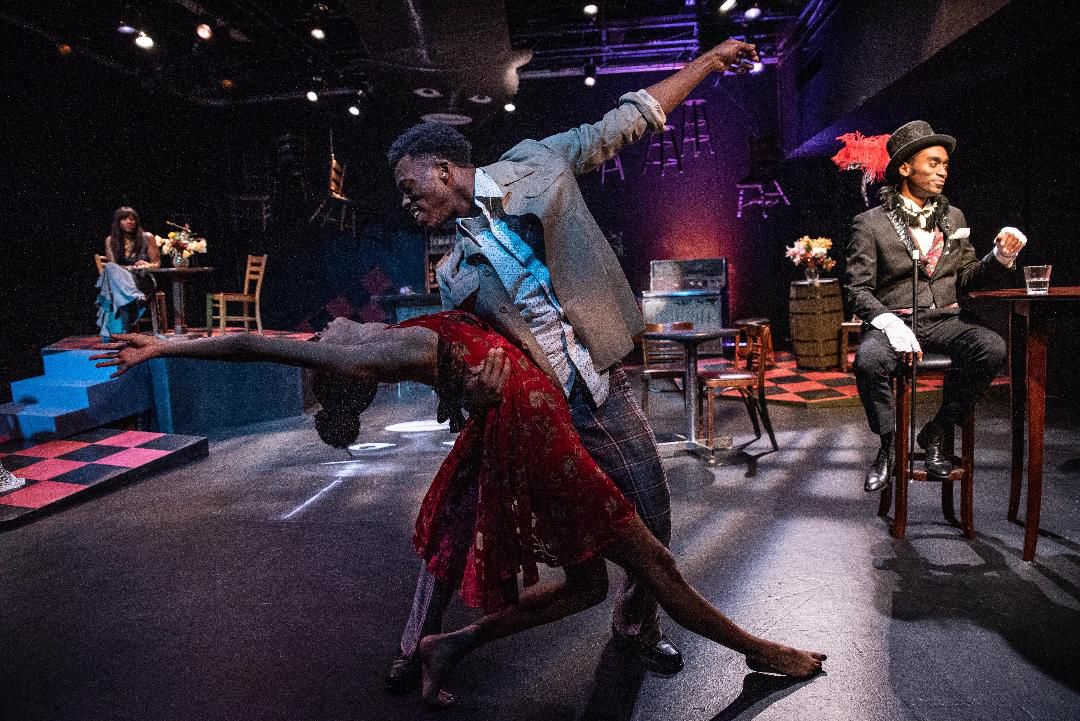 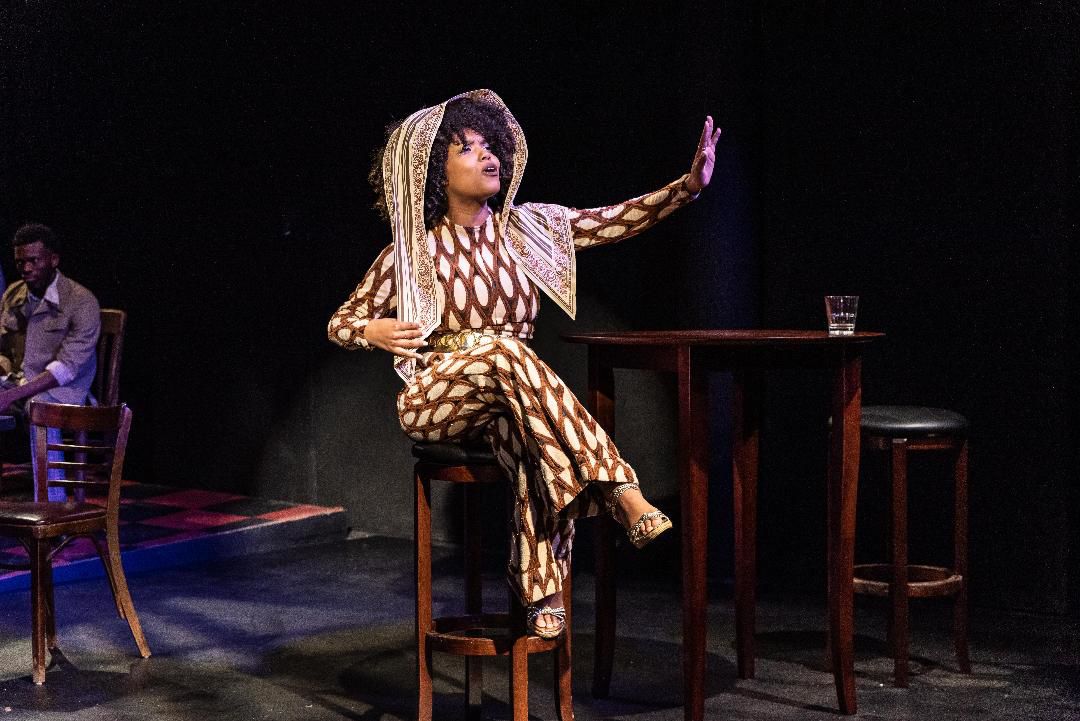 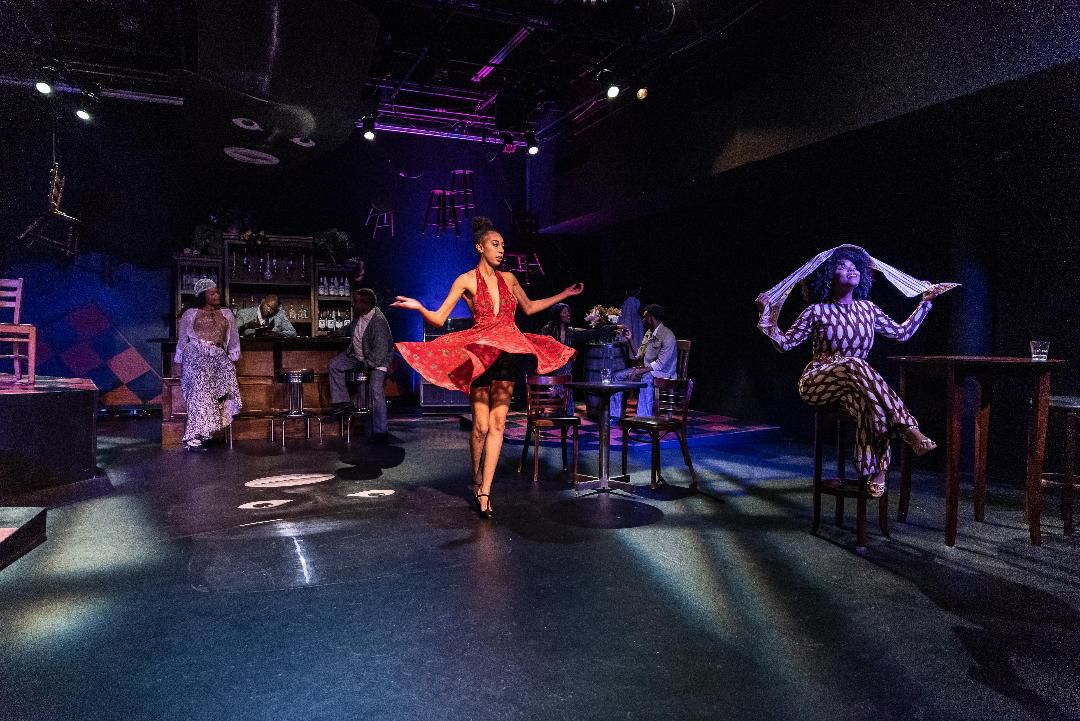 Story: The large mask of a performer in blackface looms menacingly above the floor at a St. Louis bar frequented by black performers, dancers, singers and musicians. They are welcomed by Lou, a magician who learned his craft from his father and a man who wishes to help his colleagues accept and appreciate their blackness.

That task which propels Lou became his mission after he witnessed his father abandon his trade when a little girl asked the older man if he could cast a spell to make her white. It was at a time when minstrel shows employed actors performing in ‘blackface’ and its use of exaggerated racial features, at its height the most popular form of entertainment in America.

Now, black artists congregate at their favorite hangout, where they tell or perform a series of tall stories and vignettes about the long-standing difficulties of black performers finding suitable roles and characters to portray on the American stage.

In addition to Lou, who recreates the part of “The Interlocutor” who directed minstrel shows, there’s an older actor named Alec; an actress named Maxine; Eli the bartender and his waitress Lily, a struggling actress; an unsuccessful performer named Natalie; young chorus dancers Dahlia and Bettina; and Ross, a singer and guitarist.

Separately and together, they explore their collective dilemma while supporting each other and their love for their art. The longest journey begins with a single step and these friends are equal to the task.

Highlights: The Black Rep mounts a satisfying production of this 1985 “choreopoem” by innovative playwright and poet Ntozake Shange, demonstrating how her reflections on black artistry 40 years ago remains relevant today.

Other Info: Spell #7, which was written by Shange in 1979, has been performed once before by The Black Rep in its 43-year history, if memory serves correctly. It was also produced by Joseph Papp’s New York Shakespeare Festival in ‘79 and other venues since then.

Shange’s two-act effort, which plays out in a little more than two hours, isn’t a traditional play with a focused plot and beginning, middle and end. Instead, its vignettes offer a look into a condition which plagued African-American performers and fostered outrageous stereotypes for at least two centuries.

In fact, TCM (Turner Classic Movies) has been showing a documentary of its own interspersed between flicks running as part of its “31 Days of Oscar” about the troubling longevity of blackface, including sobering scenes in numerous films throughout the 20th century which featured well-known Hollywood performers.

Those shameful celluloid moments are accentuated by lighting designer Joe Clapper in The Black Rep’s studied presentation, as his flickering illumination seems to set the players in motion, all of them adorned with blackface masks.

Scenic designer Dunsi Dai incorporates that giant blackface mask, just as did the original Spell #7 production and others, along with a handsomely laid-out club. The latter features several tables at odd angles, with accompanying chairs, as well as a sleek and well-stocked bar at center back with a series of bar stools in front. A blackface adorns the floor, as do checkerboard patterns.

Costume designer Brandin Vaughn dresses the players in outfits which correspond to their individual talents, such as the dancing Bettina or the dressed-to-the-nines look favored by Maxine. Karl Grice serves as magic consultant for Brian McKinley, who deftly handles the legerdemain woven by Lou. McKinley also sports some evocative makeup which shows both sides of Lou’s persona.

Choreographer Heather Beal adds stylish moves in balletic fashion for Bettina, Ross and Dahlia as they re-enact myriad moments, while sound designer James Biko supports the tales with an eclectic blend of music including jazz, soul and pop numbers from the likes of Stevie Wonder and others.

Director Ron Himes keeps this free-flowing work engaging for the most part, guiding his adept cast through Shange’s colorful and often troubling skits, such as one about a young woman who covets a child only to end up killing him or another focused on a girl who, seeing only white people portraying conditions, believes that blacks like herself are immune to polio and other dreaded diseases.

The pensive cast is led by McKinley as the sage but wary Lou. Jacqueline Thompson conveys the glamorous, earthy appeal of Maxine and Drummond Crenshaw as Alec gives a telling monologue about the ever-present, uphill struggles of African Americans to land coveted roles.

Marki Michelle as Dahlia and Tyler White as Bettina are engaging as the two young dancers who perform their individual stories, while Robert Crenshaw effectively handles the role of the good-time-Charlie, Ross. Camille “Cee” Sharp rounds out the informed cast as the down-on-her-luck Natalie.

With the lack of a traditional plot, Spell #7 relies on well-etched performances by its cast as they relate the several telling pieces in Shange’s choreopoem. That’s more than enough to make this Spell #7 an interesting theatrical experience.