SATE's Poignant 'Of Mice and Men' Carries More Impact Than Ever: Theater Review
Share this
1 of 9 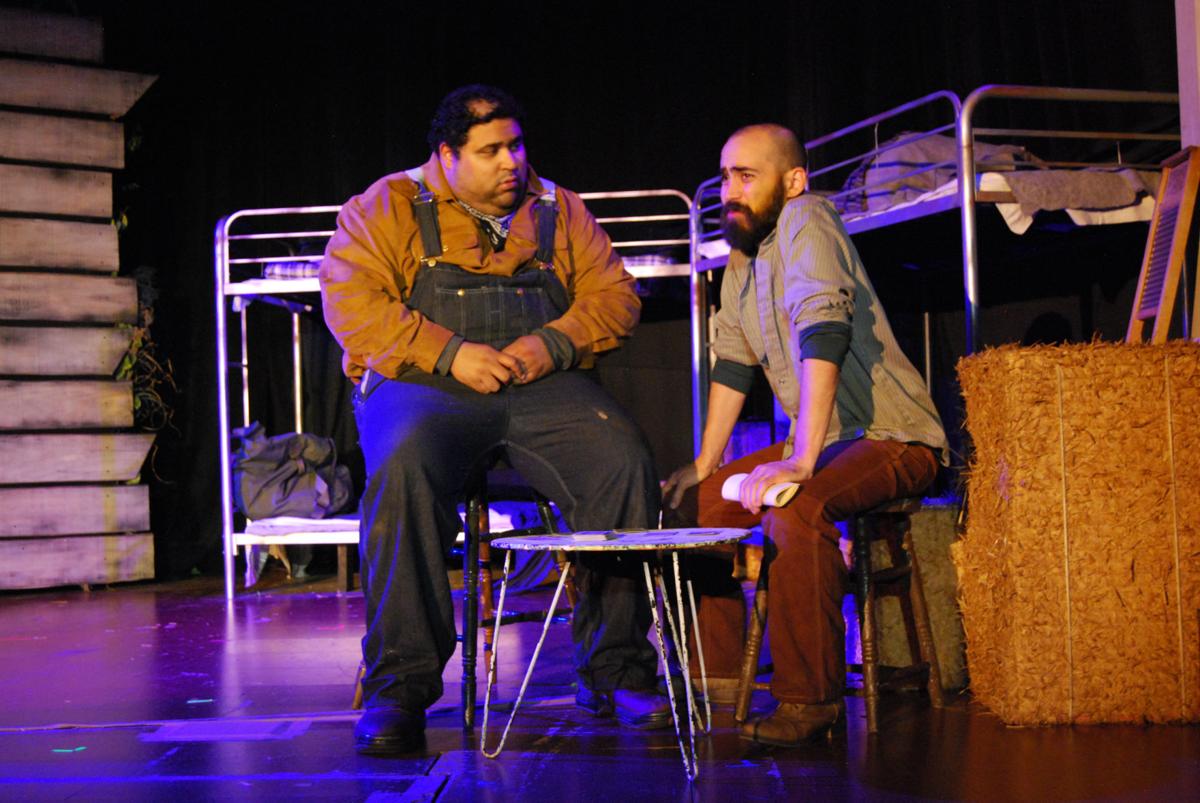 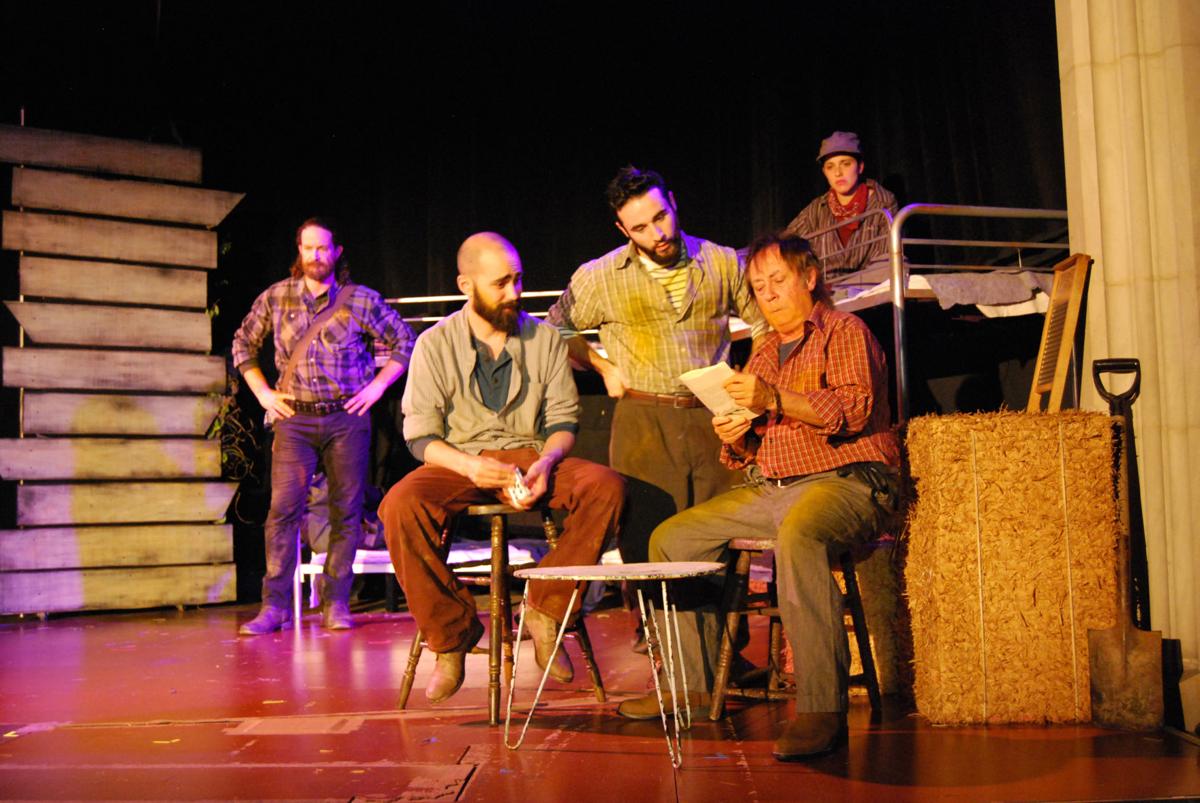 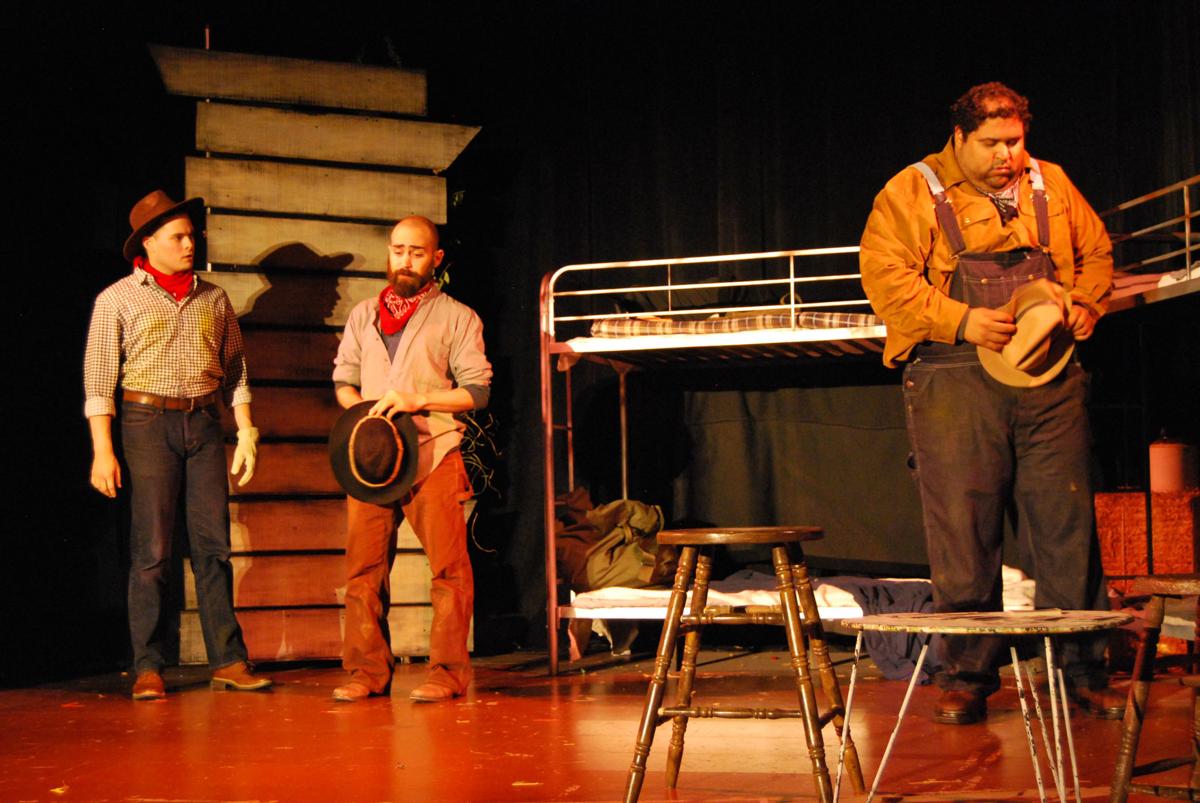 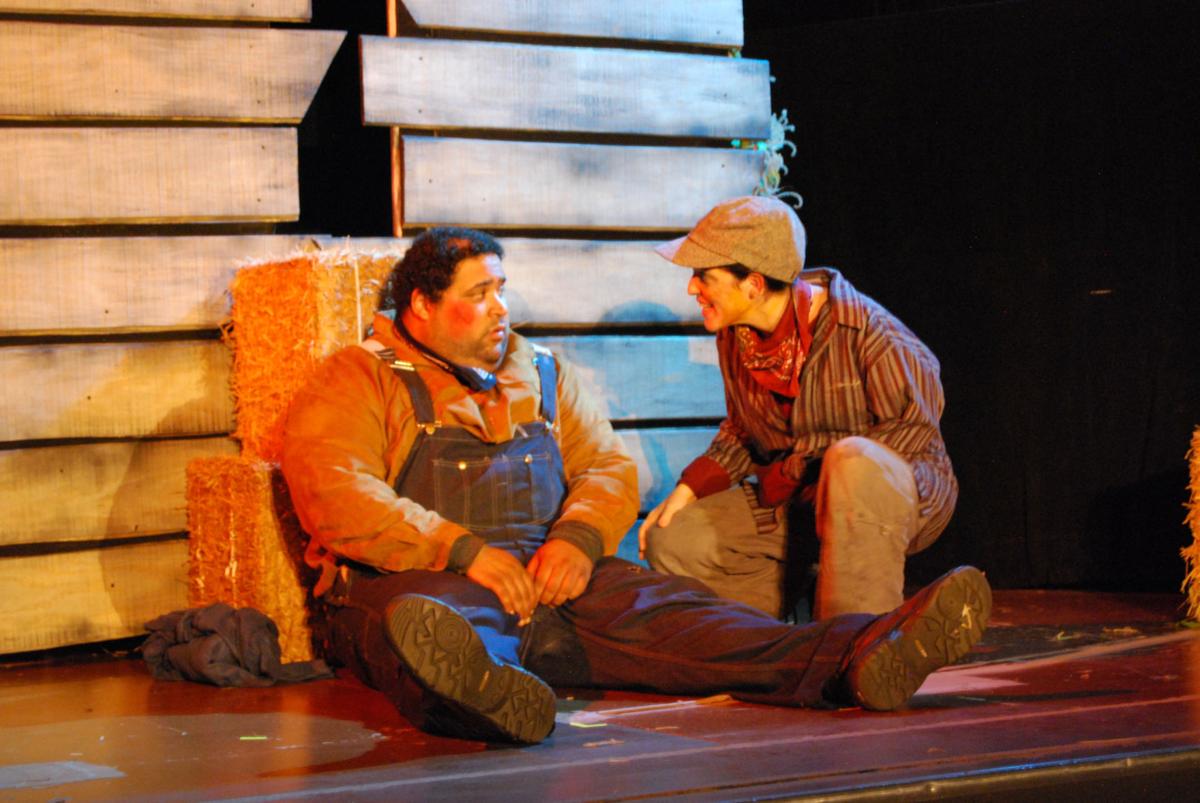 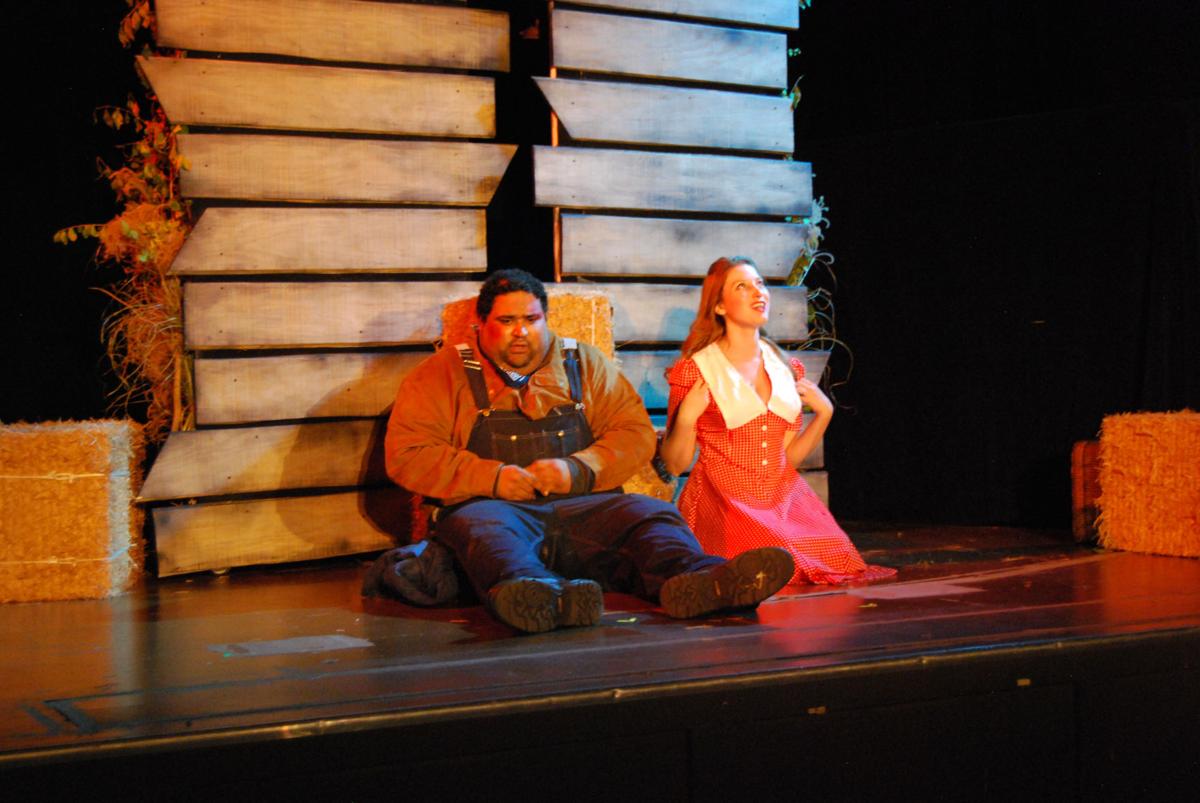 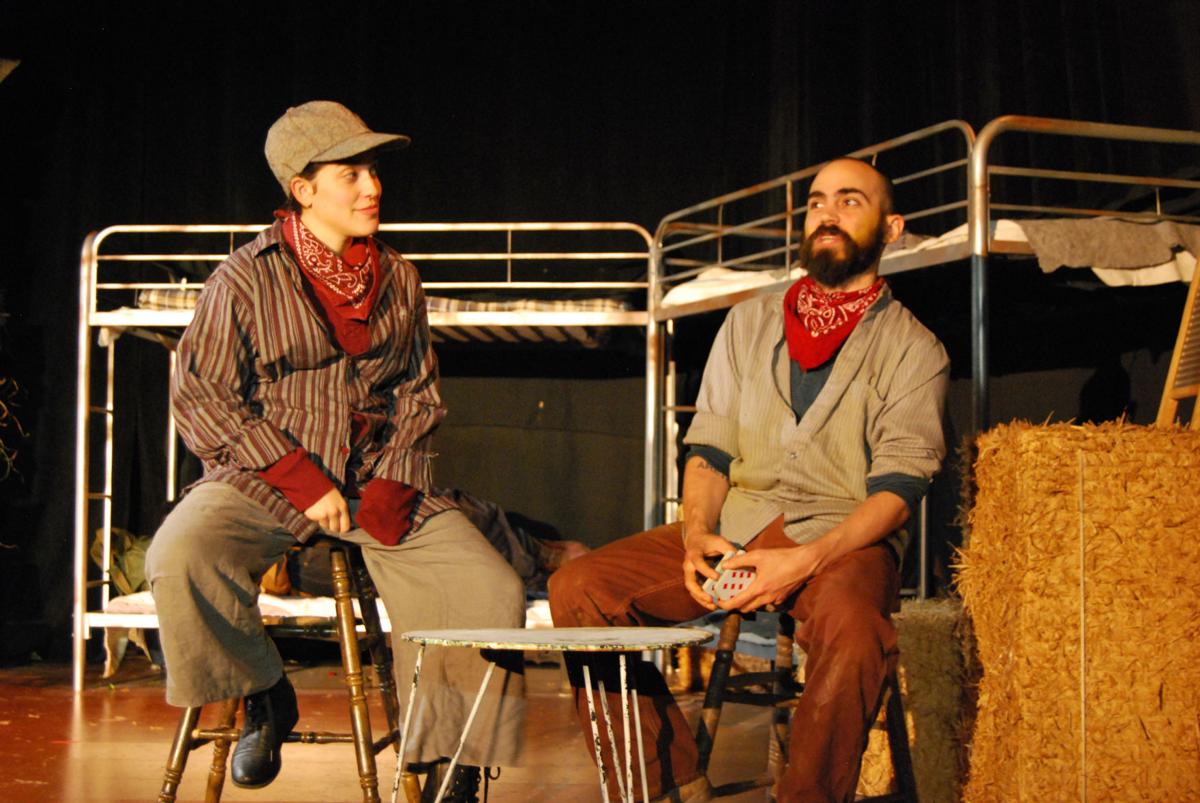 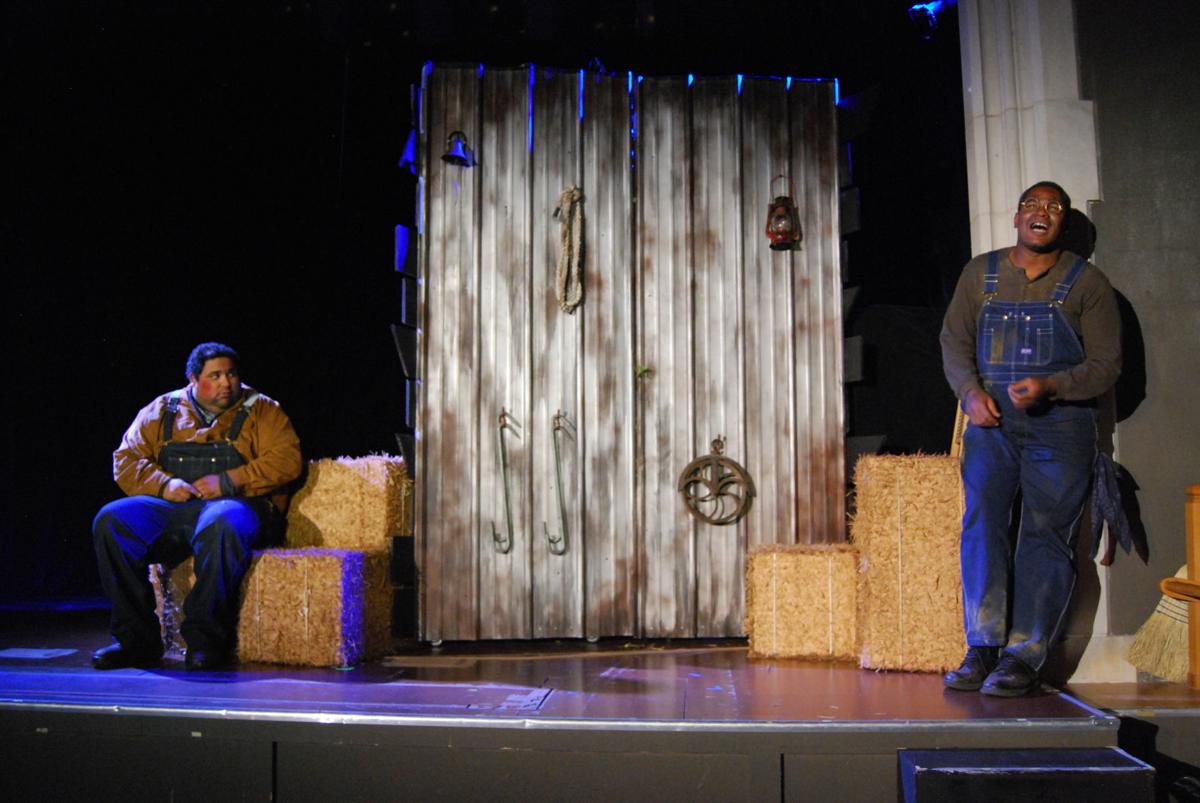 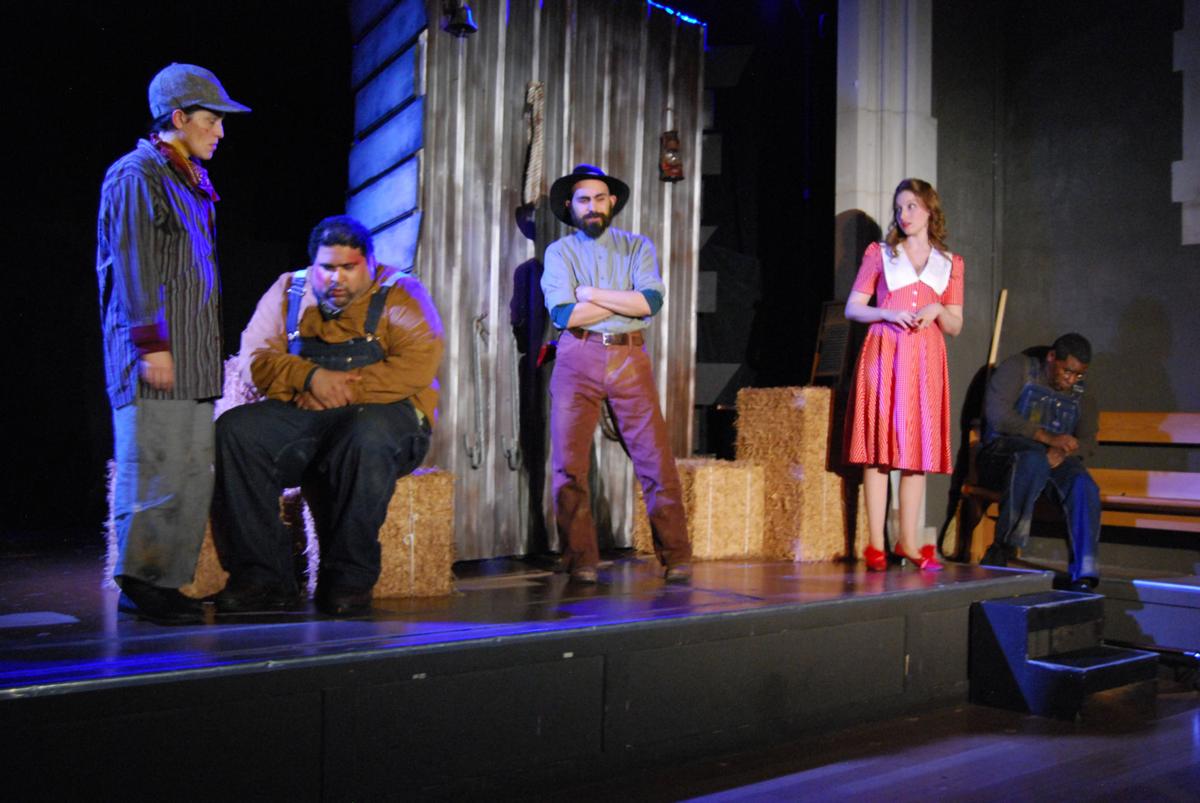 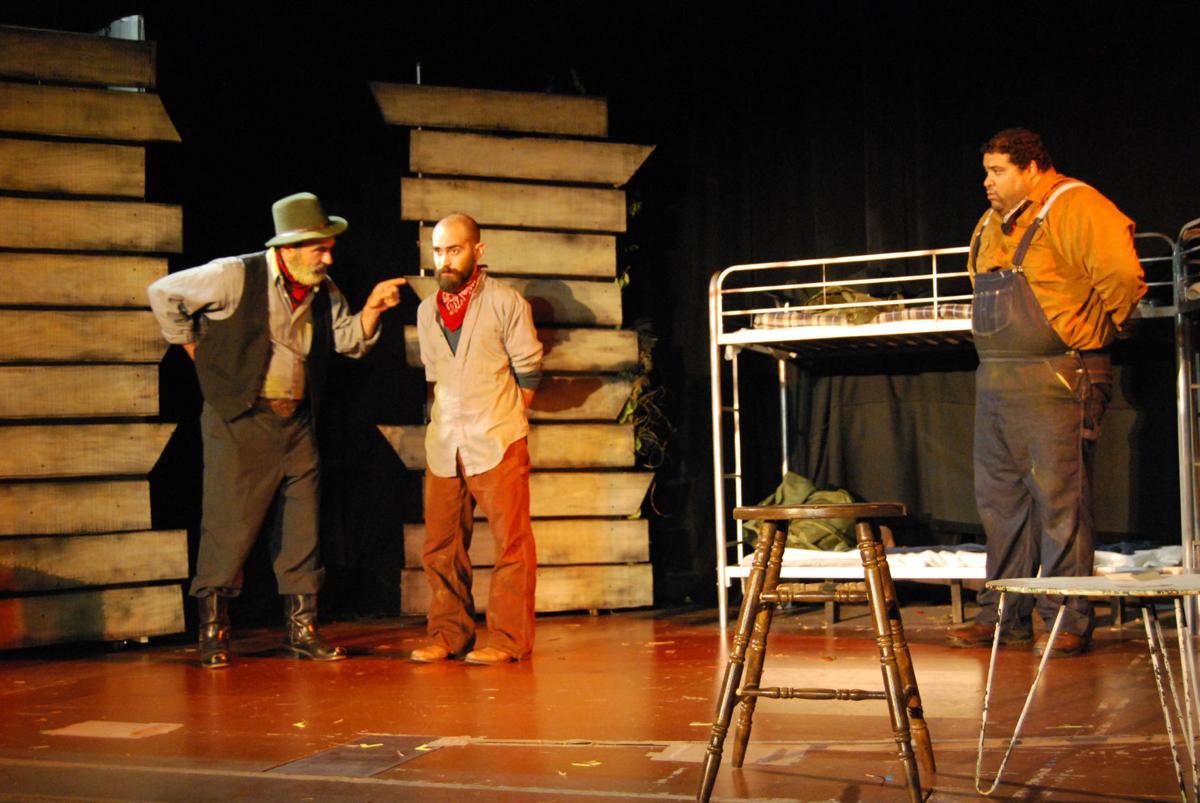 Story: Itinerant laborers George and Lennie arrive at a new job after a near-brush with disaster in nearby Weed, California. George is smart and Lennie is a gentle giant, well-meaning but mentally challenged. George looks after Lennie, something uncommon in the dog-eat-dog days of the Great Depression.

Lennie’s penchant for touching soft objects resulted in a young woman accusing him of rape when the two laborers worked in Weed. They fled a lynch mob and now are outside Soledad in the Salinas River Valley, where they take jobs on a farm, reporting to the superintendent known as The Boss.

Like the other men at the ranch, The Boss questions why two men would travel together, but he can see that Lennie must be one hell of a laborer judging by his size. George warily opens up a bit to Slim, a mule team driver who is respected by everyone. George also talks with Candy, the crippled farmhand who is reduced to doing chores with his one good hand while also caring for his beloved pet, an old and blind sheepdog.

Lennie constantly asks George to recite his favorite story, about a plot of land where he and George can one day raise their own crops and Lennie can tend the rabbits they’ll keep in a hatch. They hope to save enough money to make a down payment on such property soon. Their dreams, however, are threatened when The Boss’ churlish and jealous son, Curley, picks a fight with Lennie about Curley’s new and flirtatious wife.

When circumstances lead to unforeseen tragedy, George is forced to confront the reality of what he must do to control his kindly but unknowingly dangerous friend.

Highlights: Slightly Askew Theatre Ensemble finishes its “Season of Adaptation” with a powerful and poignant version of John Steinbeck’s classic tale of loneliness and the dreams nurtured by the “ragged people” struggling to survive the Great Depression.

Other Info: Steinbeck worked alongside the types of men he describes in Of Mice and Men when he was a young man. His naturalistic style earned him a Pulitzer Prize for The Grapes of Wrath in 1939 as well as the Nobel Prize in Literature in 1962 “for his realistic and imaginative writings, combining as they do sympathetic humor and keen social perception.” He claimed that even Lennie was based on a real person.

Director Jacqueline Thompson refers to SATE’s adaptation as a “re-imagined journey. We’ve experimented with new given circumstances relating to colorism and gender identity...where George, Lennie and Candy are different from what you read in school.”

Therein lie the few problems in this production, minor though they be. Portraying George as Latino works well enough, and for the most part having Lennie be black is fine, too. However, there’s a disconnect when Lennie meets Crooks, the aging stable-hand who is forced to live in separate quarters because of his skin color. If Crooks is confined to the stable, why is Lennie allowed to live in the bunkhouse?

The other problematic element is having Candy portrayed by Natasha Toro. Candy in the script clearly is an aged man, struggling to live out his days with his equally old and infirm dog. If Thompson wants Toro simply to portray the ranch hand, that’s OK. However, if age is not a factor for the youthful Toro, then why have Omega Jones in makeup that is applied to make him look the age of the older Crooks? That’s an inconsistency in this production.

Thompson’s accomplished cast delivers uniformly excellent performances, anchored by affecting interpretations by Adam Flores as George and Carl Overly Jr. as Lennie. Flores demonstrates the genuine and protective love George has for his feeble-minded companion, someone who helps him ward off the oppressive loneliness that looms large in the lives of nearly all of the characters. It’s a delight hearing Flores tell Overly as Lennie the story of their own place and the rabbits Lenny will care for.

Overly uses his imposing figure to good advantage, yet masks Lennie’s power with slumped shoulders and an innocent look that appears friendly to everyone except the mean-spirited Curley, who’s looking for someone to berate and humiliate. Overly conveys Lennie’s kind heart and simple mind as well as the confusion which can lead to tragic consequences with both his child-like mannerisms and open expresssions.

Joe Hanrahan shows the innate wisdom of the respected mule team driver Slim, puzzled by the unusual friendship between two migrant workers, who tend to travel alone in Slim’s experience, but a man who welcomes the two new employees without prejudice.

There’s fine work, too, by Toro as Candy, whose use of just one good hand reduces the aged worker’s value to the team. When Candy’s beloved dog is killed by the unfeeling Carlson because the pet is old, smelly and blind, Candy sees the writing on the wall. “You saw what they did to my dog. What do you think they’ll do to me?,” asks Candy of George. Toro etches the dreams of Candy to help purchase that elusive piece of land where he, George and Lennie can live in peace.

Jack Corey has a fine turn as the tough but fair Boss, whose skepticism of George and Lennie is assuaged by George’s reassuring words. Michael Cassidy Flynn conveys the nasty nature of the Boss’s ill-willed son, Curley, highlighted in an arresting scene when he picks on Lennie to his great disadvantage.

Courtney Bailey Parker shows the various sides of Curley’s wife, a character deliberately unnamed by Steinbeck as a “symbol” as much as a real person, revealing her own hopes and dreams as well as an unpleasant streak. Omega Jones is outstanding depicting the bitterness of Crooks at the prejudice directed towards him as well as his own fleeting hopes of joining the new men on their quest for Shangri-La.

Shane Signorino and Ryan Lawson-Maeske capably portray two other farm hands, the former as the indifferent Carlson who can’t understand Candy’s feelings for his declining dog, and the latter as an amiable lad who notices a letter to the editor of a magazine that was written by another migrant.

Thompson’s direction maintains the pathos of the story with nary a dip in pacing throughout its two acts, utilizing the aisles to the stage as well as the elevated platform itself. She’s aided by Chris Ware’s musical accompaniment on guitar, which is effective but unfortunately too intrusive in the first act. Bess Moynihan’s excellent lighting underscores her scenic design, which is malleable to allow for various scenes.

Liz Henning provides the well-appointed costumes, delineating the finery of Curley and his wife from the drab attire of the workers. Rachel Tibbetts provides props, Ellie Schwetye adds the sound design and Lawson-Maeske’s fight choreography accentuates the riveting brawl between Curley and Lennie.

Of Mice and Men has lost none of its poignancy and resonance since its debut more than 75 years ago. In fact, with intolerance in American society currently at such an egregious level, it carries more impact than ever. The final scene in SATE’s endearing adaptation is as astounding as anything you’re likely to see for a long, long time.

Play: Of Mice and Men