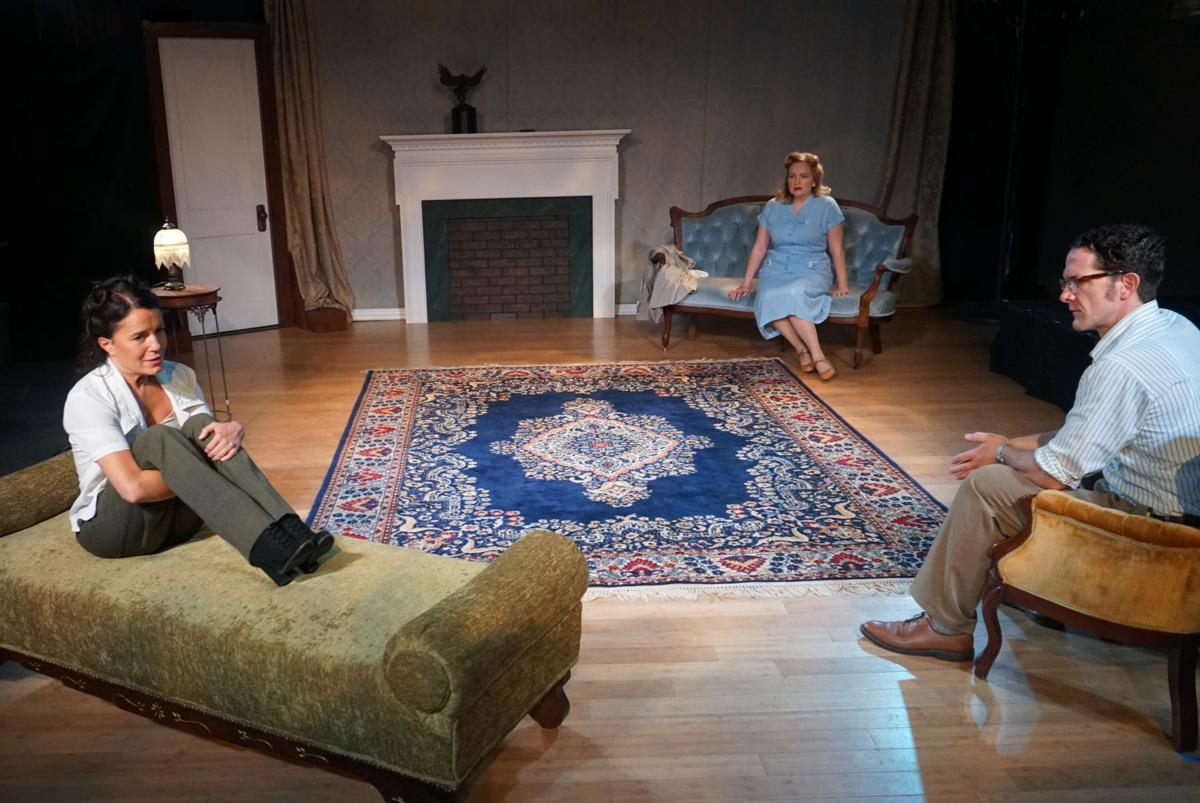 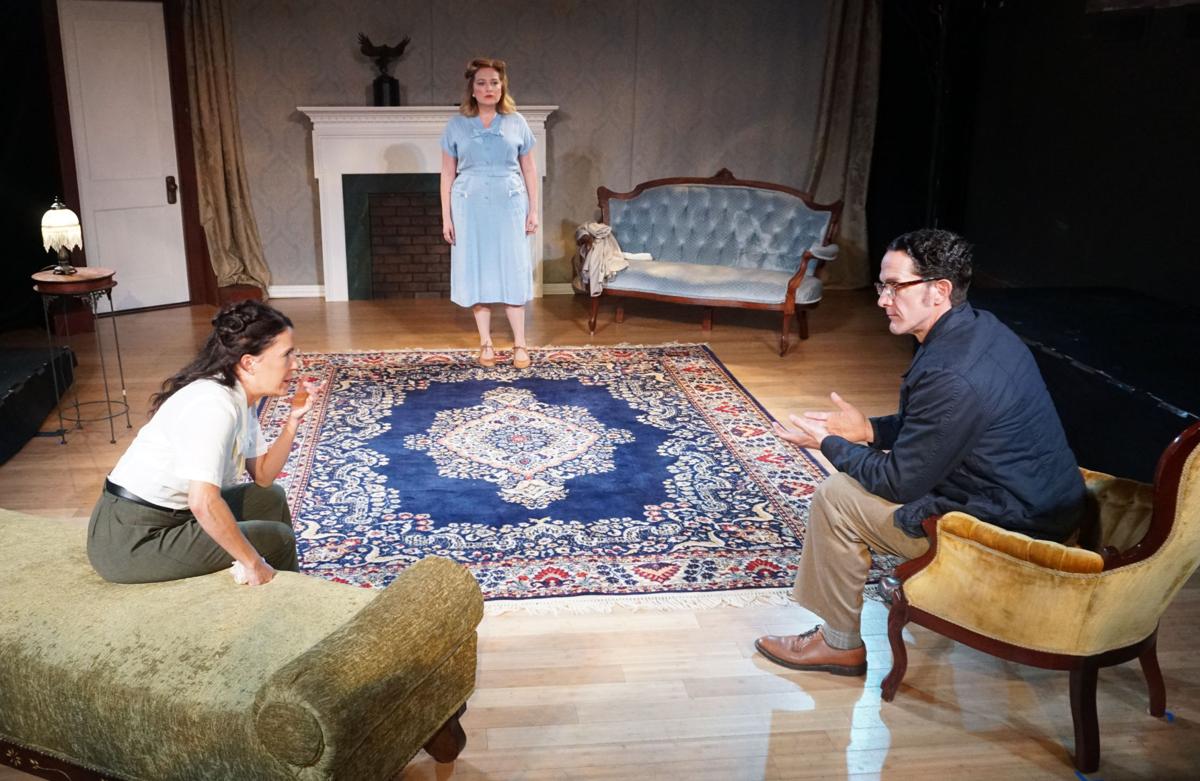 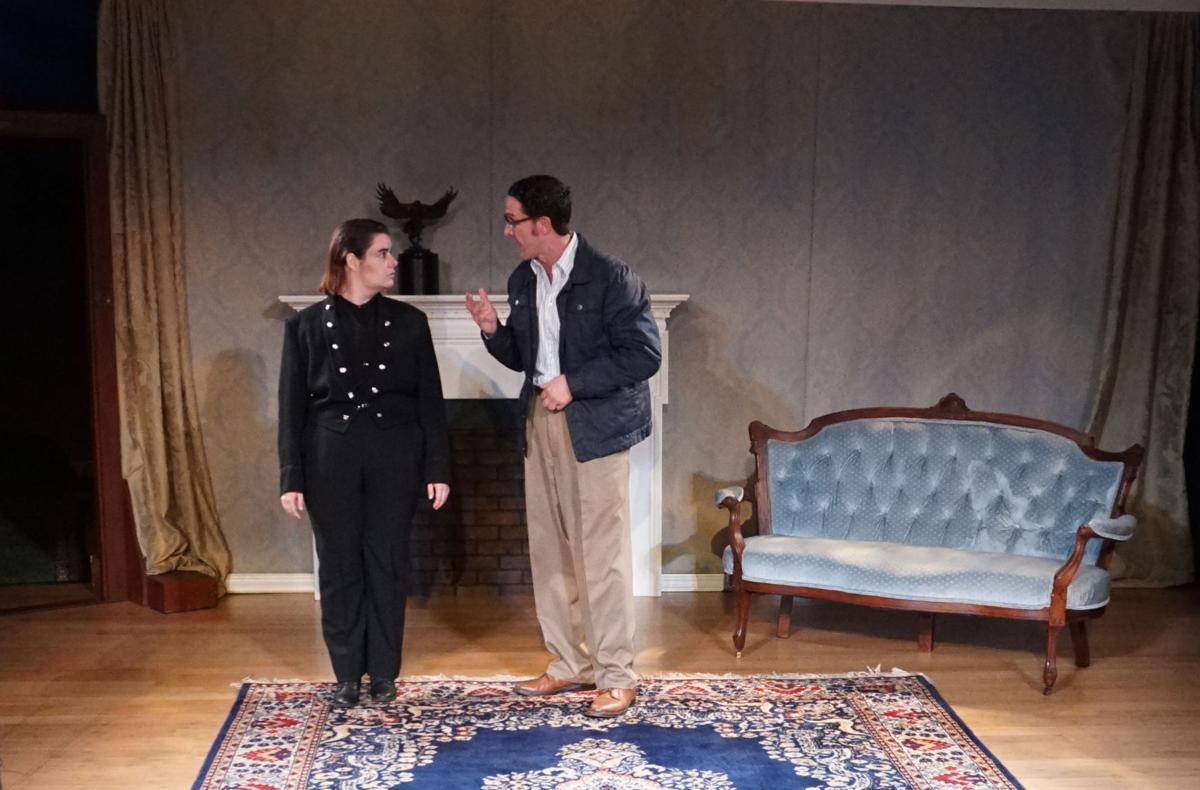 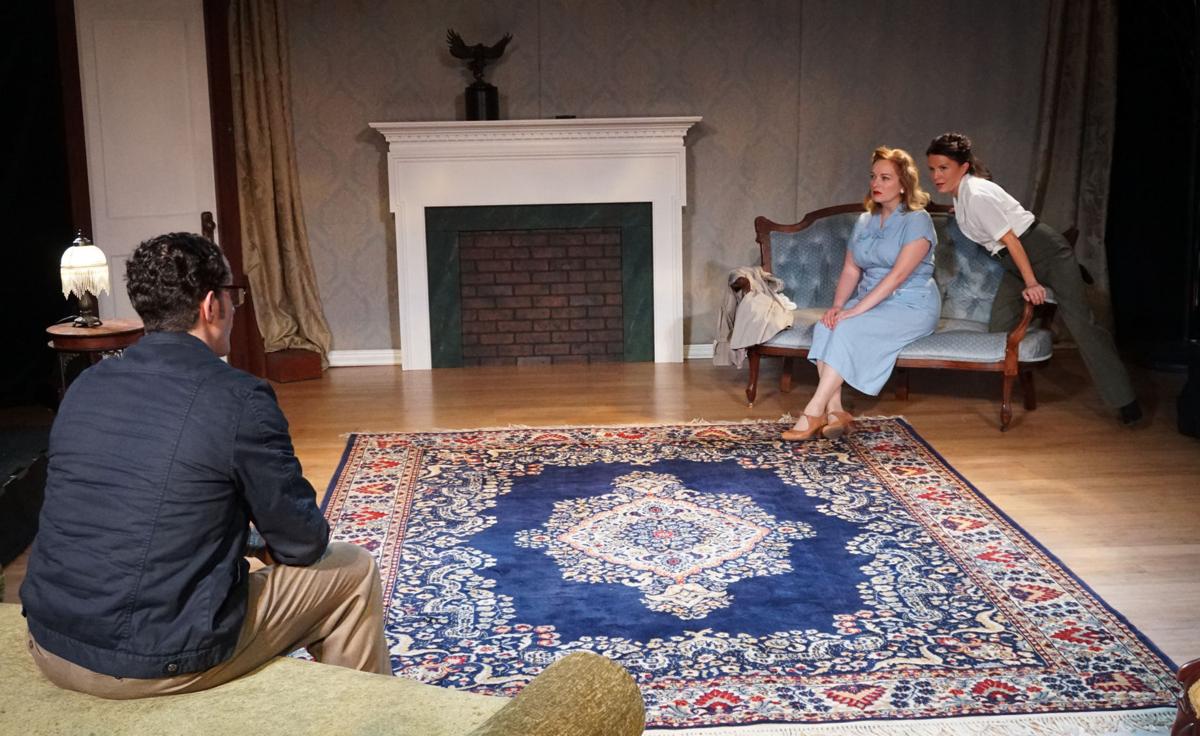 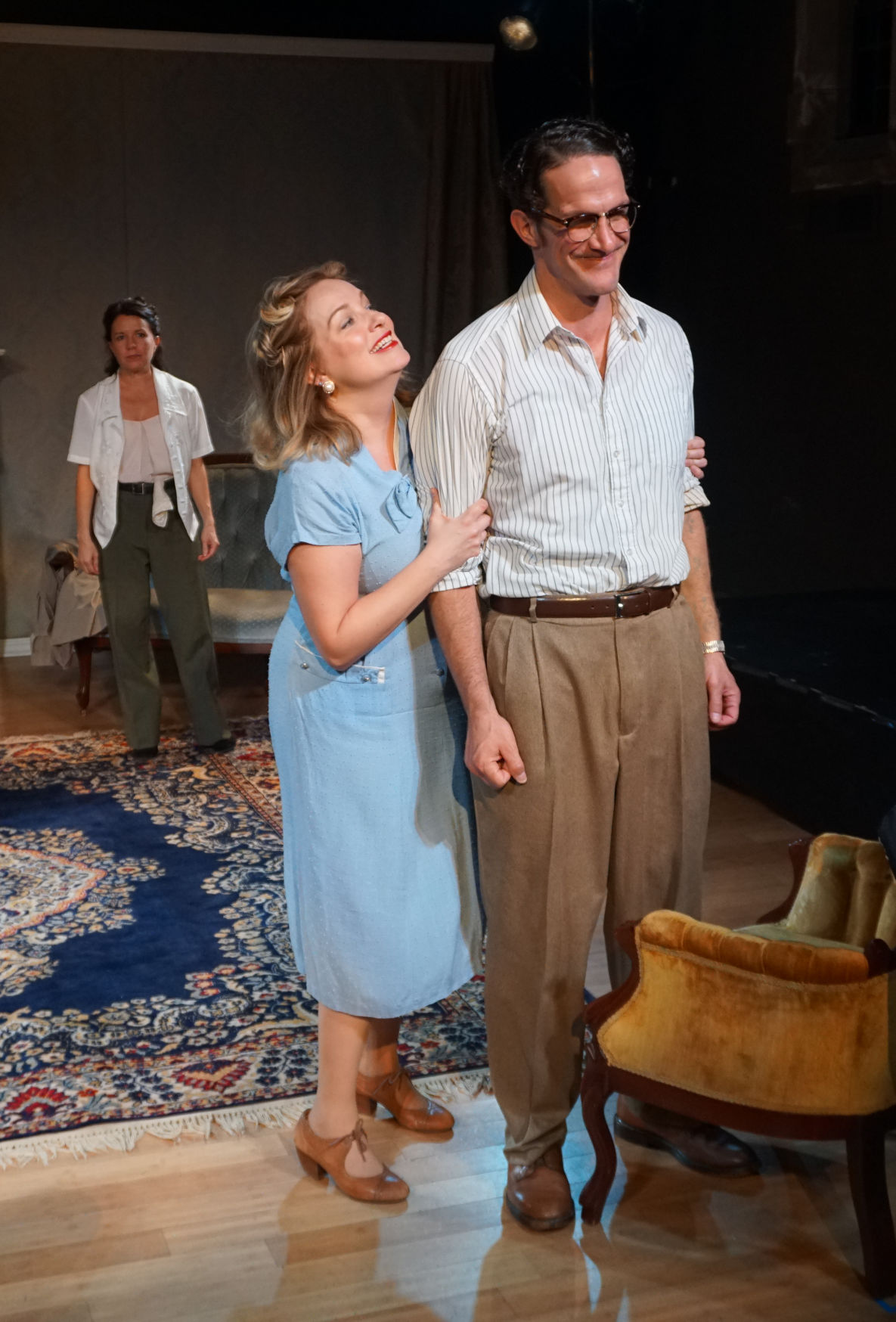 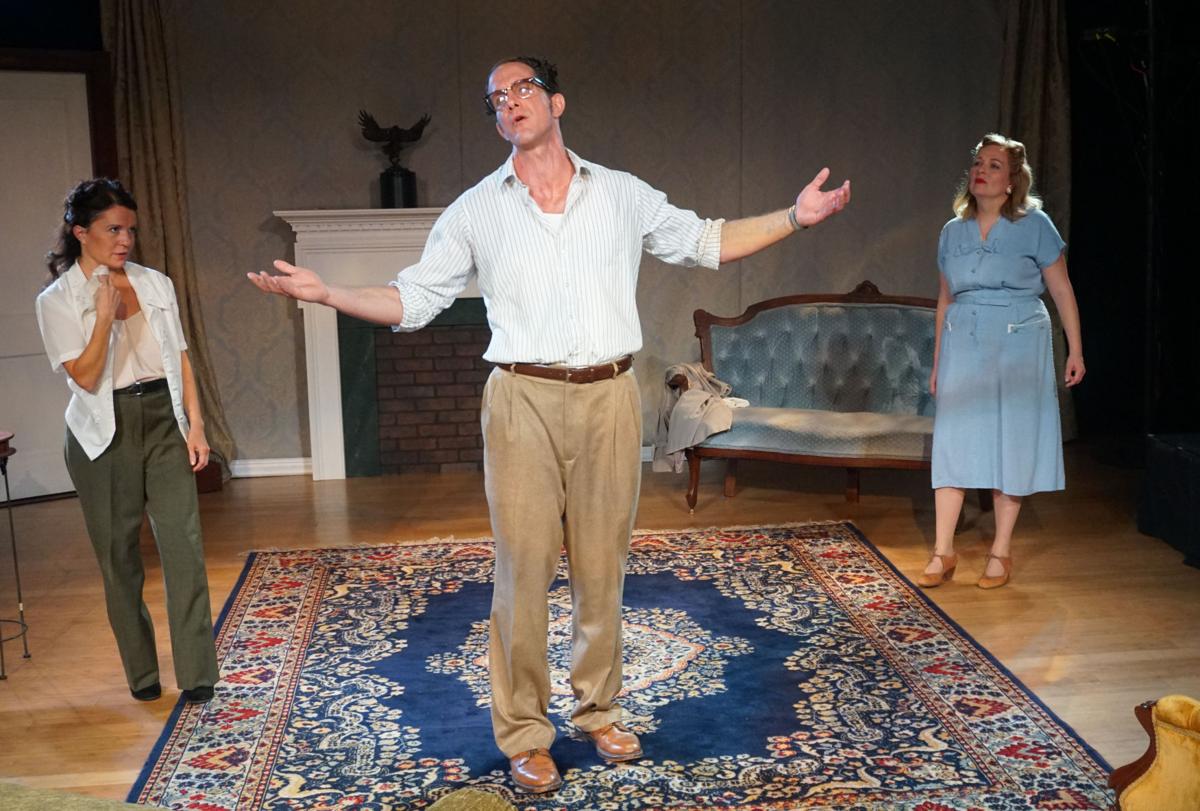 Story: Garcin is escorted by an unsmiling valet into a room in hell. It certainly isn’t what he had expected. It’s decorated with old, 19th century style furniture consisting of an ottoman, a sofa, a chair and a Persian rug on a wooden floor, along with a bricked-up fireplace and an unmovable statue on the mantel.

What it doesn’t have are any perceptible devices of torture, which surprises Garcin. The valet offers no clues except to say that she reports to a relative who is a senior valet in the hallway. She leaves and returns with Ines, another soul damned to hell, followed by a third one named Estelle.

The valet then departs and the three ‘newbies’ begin to talk to each other in somewhat guarded fashion. While Garcin and Estelle express surprise that they’re in hell, Ines observes that they are in this place because all of them have done something terrible in their lives and that they’d be better off admitting their sins.

Garcin says that he’s a journalist who was vilified as a coward during the war for being a pacifist, while Estelle claims that she was an innocent young woman who married an older, wealthy man who would take care of her. Ines scoffs at both and says that each of the three is in reality the torturer of the other two and that they’d better get used to it.

Ines is attracted to Estelle, who in turn flirts provocatively with Garcin, who admits no interest in either of them. Gradually, as they grate on each others’ nerves, Garcin reveals that he cheated on his wife and mistreated her badly and that she died while he was in prison. Ines states that she seduced the wife of her cousin, destroying his marriage, while Estelle finally admits that she had an affair with a young man who impregnated her and then killed himself after she murdered their baby.

The revelations bring no relief to any of them, however, all of whom seem trapped by their own inertia. When Garcin somehow manages to open the door to the hallway which previously had been locked, he can’t bring himself to walk through it, nor can the two women. Welcome to their shabby little room where hell “is other people.”

Highlights: SATE continues its “Season of Entrapment” with an intriguing presentation of existentialist writer Jean-Paul Sartre’s landmark drama of the mid-20th century. Director Bess Moynihan gets handsome performances from her quartet of players who keep the audience involved in the travails of three wayward souls lost in eternal damnation.

Other Info: SATE utilizes a new translation by Alyssa Ward in its one-act, 90-minute rendition and includes an interesting analysis of the work by dramaturg Andrea Robb in its program notes.

It’s performed on a nifty set designed by Moynihan which cleverly includes a “No Exit” sign to the side of the stage and strategically places pieces of furniture at far ends of the performing area to underscore the emotional distance between characters. Moynihan addresses the chasm between the characters by frequently positioning them at opposite ends of the stage.

Michael Sullivan’s lighting accentuates the suffocating, claustrophobic atmosphere, with a red hue emanating from hell’s hallway, while the sound design created by Ellie Schwetye is somber, foreboding and eerie, interspersed with the noise of slamming doors. Costumes designed by Marcy Ann Wiegert address the comfortable lives each of the doomed souls lived while on Earth.

Sarah Morris commands the stage as Ines, insinuating herself into the wretched, tormented souls of the other two inhabitants in the chamber. She shows Ines as manipulative, cynical and caustic, yet succumbing ultimately to the relentless anguish of her eternal plight. Her Ines is expert at mocking Garcin with contemptuous remarks or sneering glances and cleverly wearing down Estelle as the latter’s self-appointed ‘mirror,’ only to ultimately be repudiated.

Rachel Tibbetts conveys the ‘damaged damsel’ demeanor of Estelle, adeptly showing how her character’s true colors emerge to reveal a shockingly self-absorbed spirit. As Garcin, Shane Signorino depicts the arrogance of a man who frantically wants to shed the ‘coward’ label and implores the women to bolster his eroded self-image in desperate and futile fashion.

Katy Keating completes the quartet in a fine performance as the menacing, venal valet who enjoys setting up the latest denizens of hell for their eternal wailing and gnashing of teeth, existentialist style.

Sartre and other writers including Camus, Nietzsche and Kierkegaard wrote about the complexities of life from an existential point of the human subject as the beginning of philosophical thinking, whether from religious, agnostic or atheistic perspectives. SATE’s compelling presentation of No Exit invites audience members to consider how their own views align with such profound thinkers.