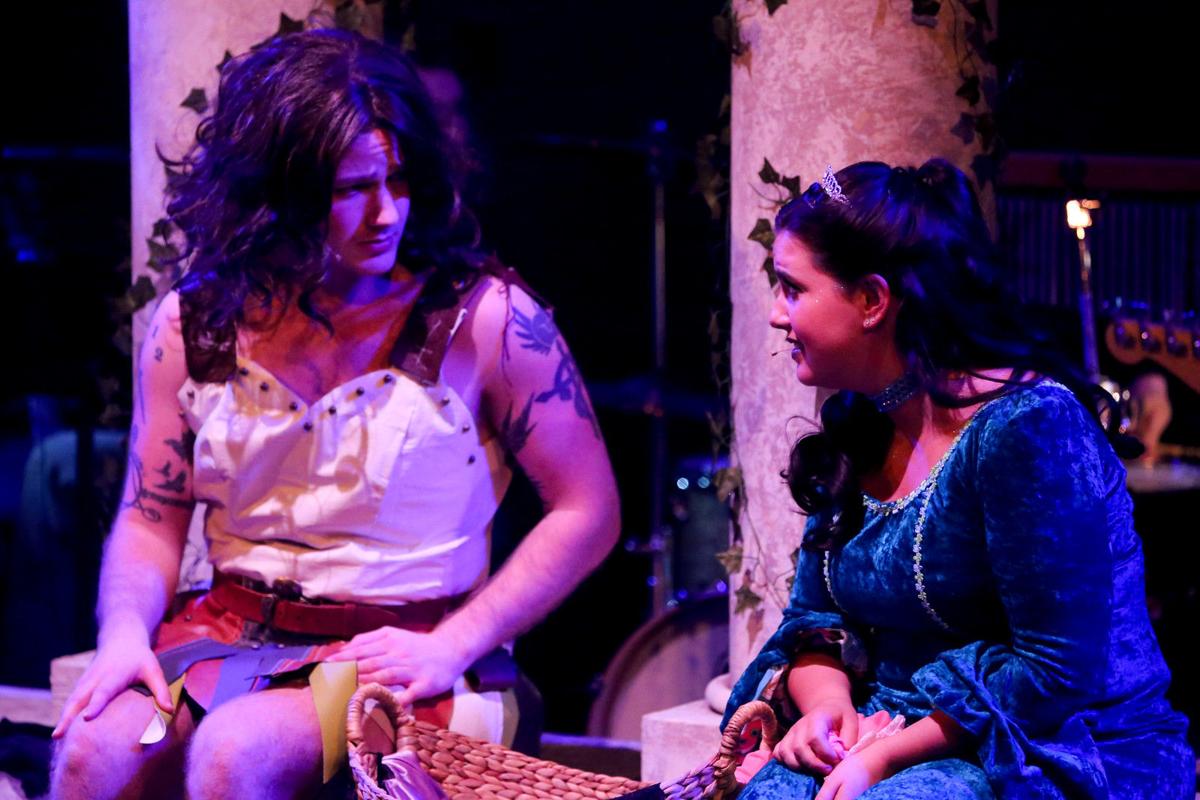 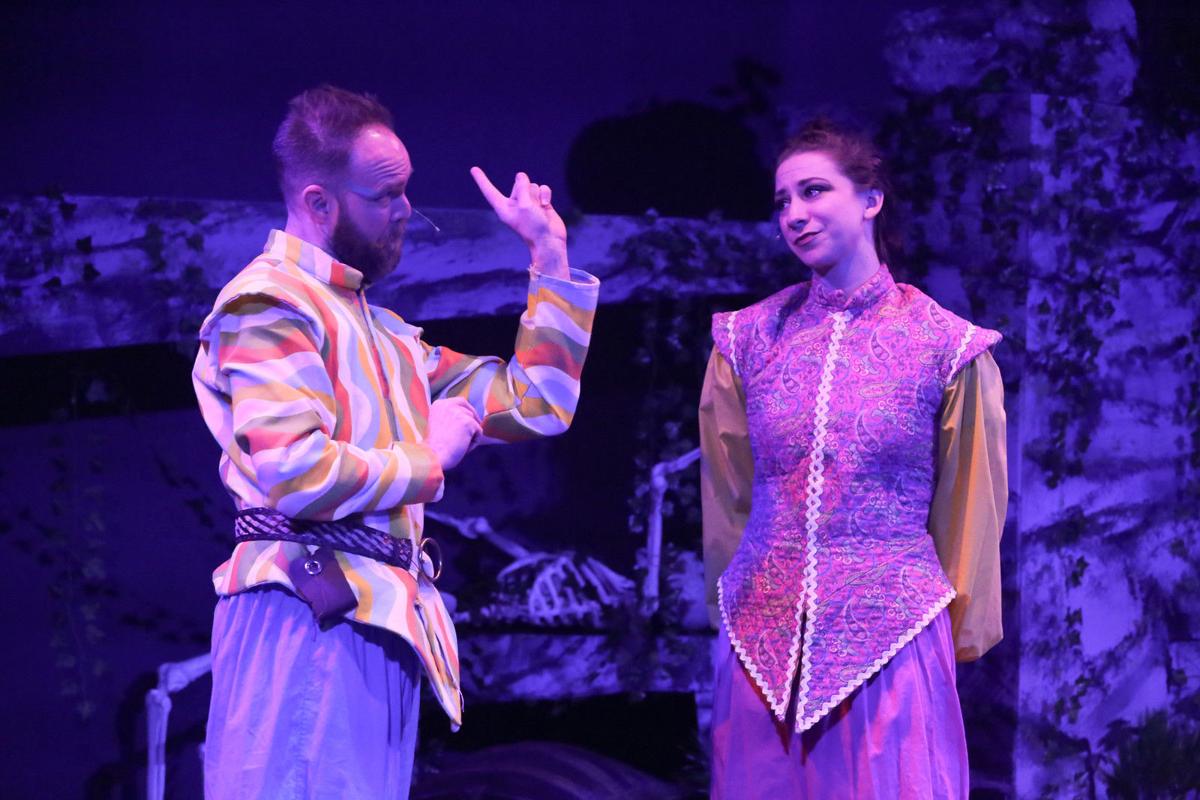 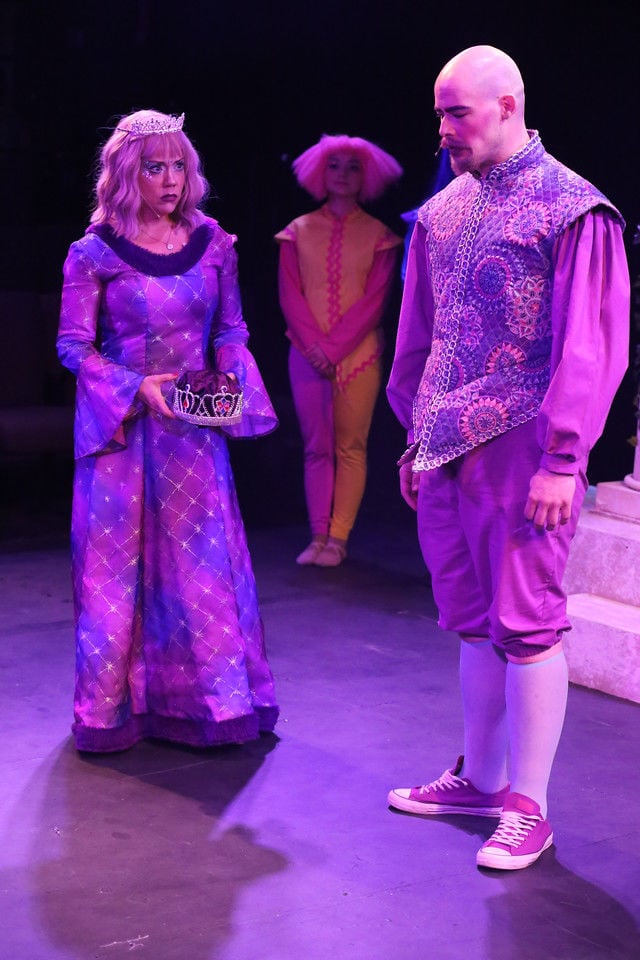 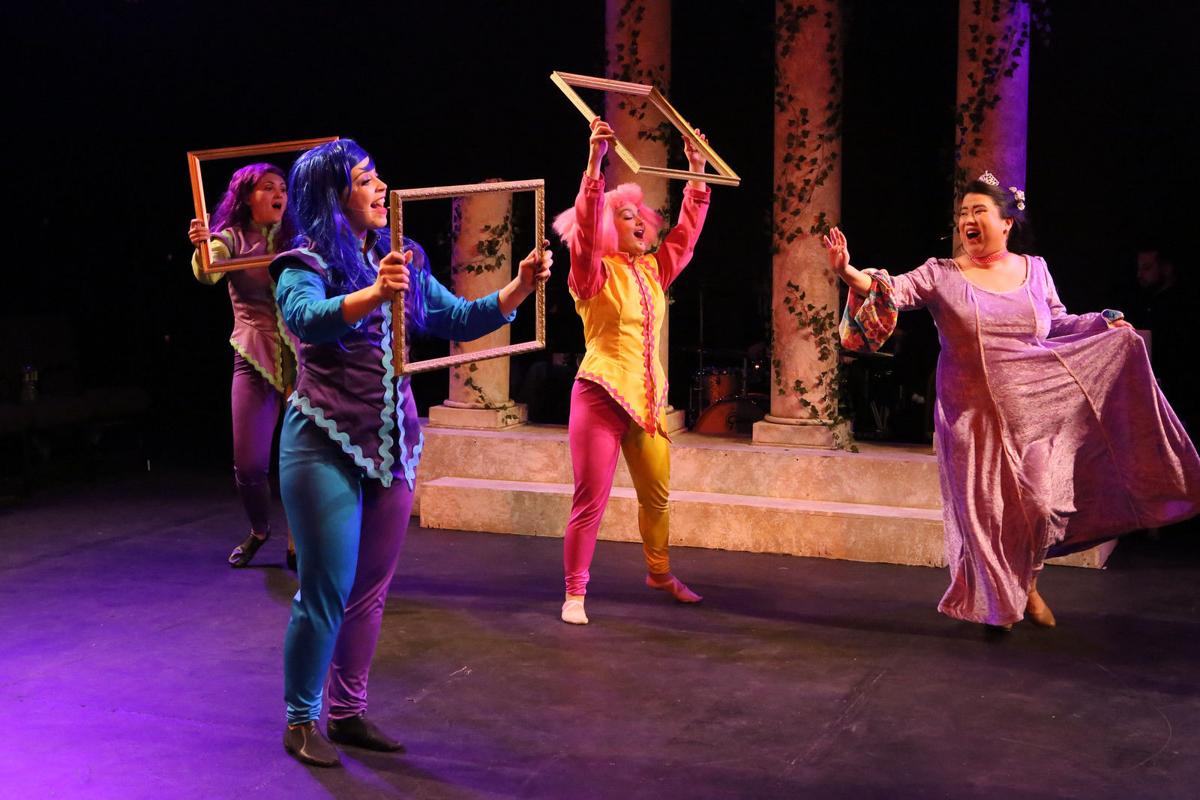 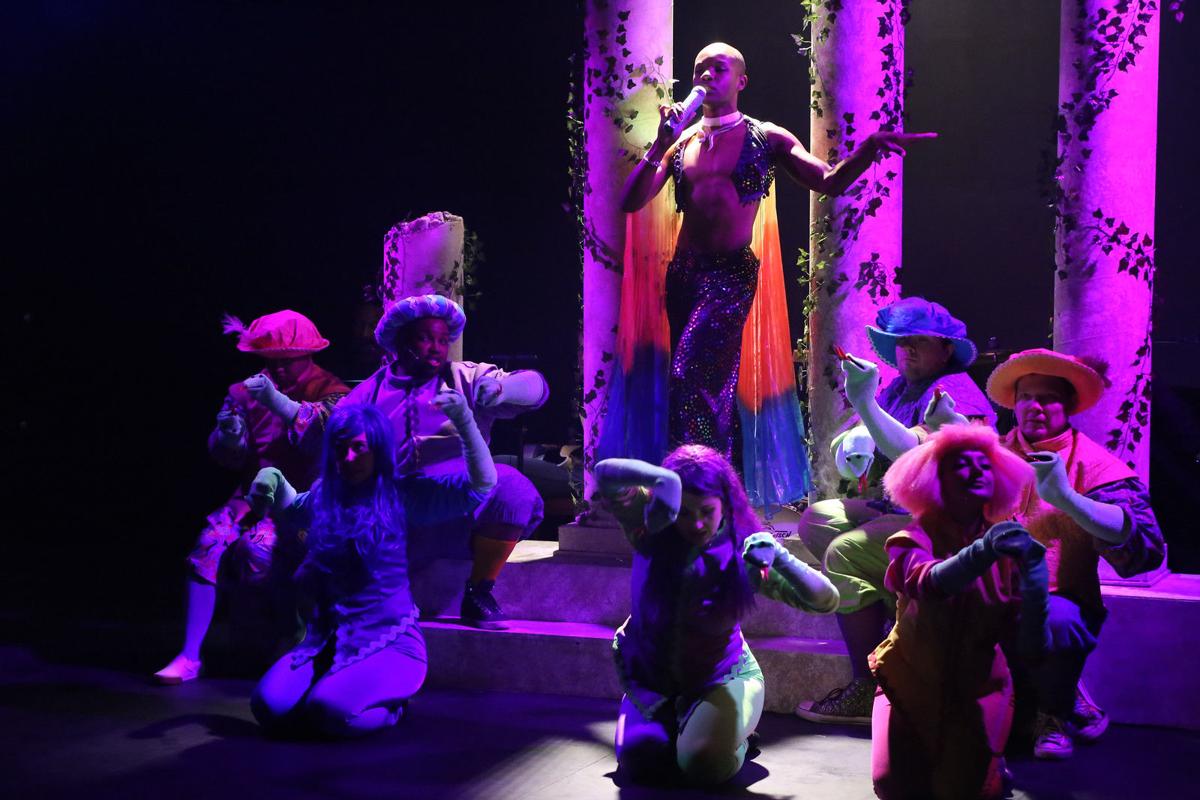 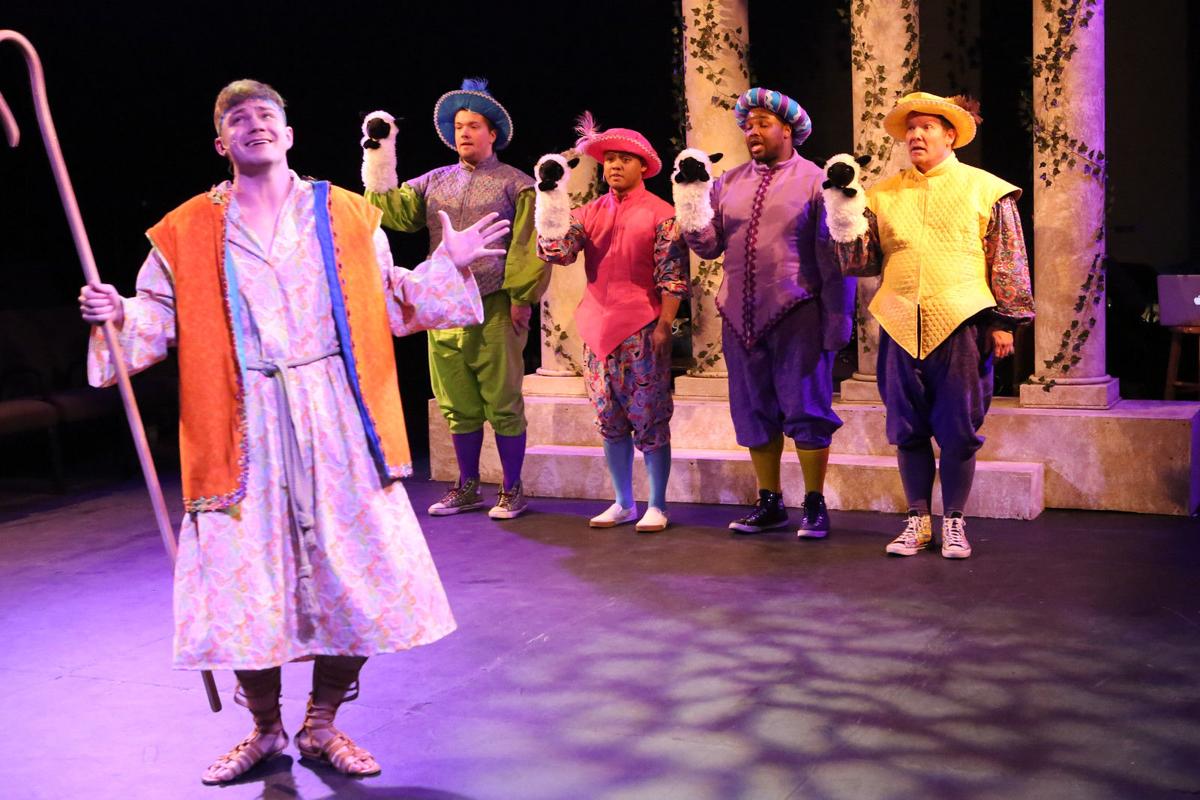 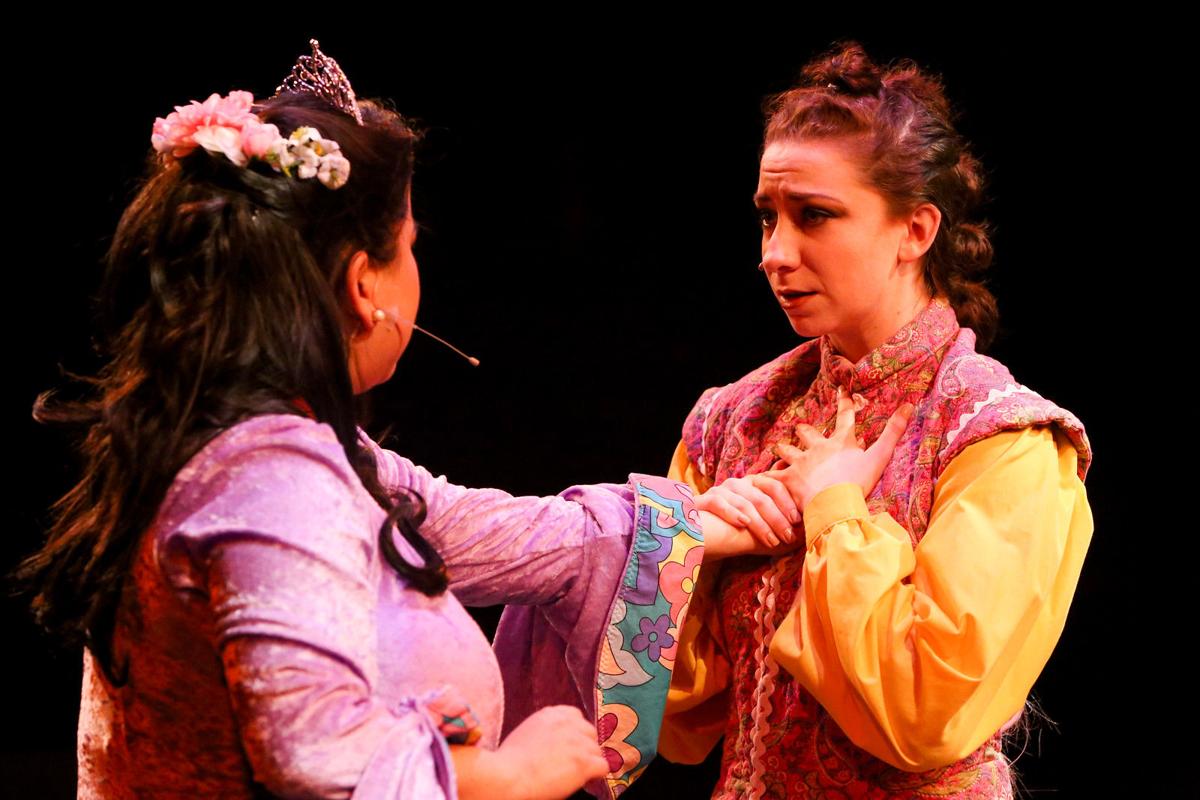 Story: All is well in the ancient kingdom of Arcadia, where King Basilius rules with a firm fist over his subjects, an attitude his wife Queen Gynecia merely tolerates. Uppermost on Basilius’ mind is getting his elder daughter Pamela married to one of the wealthy eligible suitors who court her.

It’s all in vain, however, as Pamela doesn’t seem interested in the many men who pursue her. On the other hand, younger daughter Philoclea has her sights set on a handsome shepherd named Musidorus. Obviously, the young man’s station in life doesn’t sit well with Basilius, who rejects Musidorus when the latter asks the king for permission to marry Princess Philoclea.

As if that wasn’t enough turmoil, the oracle Pythio sends an ominous message to the king, saying that Arcadia may lose its famous ‘beat’ if the oracle’s warning isn’t heeded. Basilius decides to meet Phythio in a nearby forest, accompanied by his faithful steward Dametas, the widower father of Pamela’s childhood friend Mopsa.

Pythio informs Basilius that four flags will fall before Arcadia loses its beat: His younger daughter will bring a liar to bed who assumes a female role; his older daughter will consent to wed but not to a groom; the king and queen will commit adultery with each other; and a ‘better’ king will replace Basilius.

Not happy with any of that but especially annoyed that he’s marked for replacement, Basilius vows to kill the man he deems his rival for the crown. While the king plots murder, Musidorus finds the costume trunk of a defunct theater troupe and assumes the identity of Cleophila, an Amazon warrior.

Cleophila becomes the object of affection of the smitten Basilius as well as Queen Gynecia. 'She' also is attractive to Pamela, something which considerably annoys Mopsa, who discovers her own romantic feelings for Princess Pamela.

It appears that all four flags soon will be falling and that Arcadia will indeed lose its beat. Is all hope for happiness in the kingdom irretrievably lost? Will Pamela reciprocate Mopsa’s feelings? Can Musidorus and Philoclea realize their yearnings for each other despite their social class differences? And from where exactly did Pythios originate? There’s much to contemplate in idyllic Arcadia.

Highlights: The music of the ‘80s all-girl rock group, The Go-Go’s, is joyfully incorporated into this offbeat jukebox musical given an endearing interpretation in its current incarnation at New Line Theatre.

Other Info: Head Over Heels premiered at the Oregon Shakespeare Festival in 2015. It had a pre-Broadway run in San Francisco in 2018 before opening on Broadway later that year, where it ran for 200 total performances before closing in January 2019.

In addition to songs by The Go-Go’s and Tom Kitt’s music arrangement, the musical features a book by Jeff Whitty, who also conceived the show, adapted by James Magruder. Head Over Heels is based on the 16th century work, The Countess of Pembroke’s Arcadia, which was written by Sir Philip Sidney.

True to its origins, Head Over Heels is written in an Elizabethan style. The toe-tapping rhythms in the Go-Go’s music infuses the production substantially thanks to the focused attention to detail by the New Line band under keyboardist Nicolas Valdez’ studied conducting. He’s nobly assisted by lead guitarist Jake Heberlie, guitarist Aaron Brown, percussionist Clancy Newell and Jake Stergos on bass.

The show’s two acts move briskly in two and a half hours, including intermission, thanks to the steady and well-disciplined direction of Scott Miller and Mike Dowdy-Windsor. Action takes place in an open area between the two sides of Rob Lippert’s classical scenic design, with columns at one end and stones on the other, all covered in vines.

The zesty choreography created by Michelle Sauer and Sara Rae Womack is cleverly interpreted by some cast members while others clumsily cavort along. Still, it considerably enhances several of the catchy numbers.

Several Go-Go’s hits frequent the show, including the production’s best number, Mad About You, with Musidorus ruminating about his love for Philoclea while a quartet of sheep (ensemble members with sock puppets) sway in the background.

The show opens with the infectious number, We Got the Beat, closes Act I with the pulsating Our Lips Are Sealed and also works in the title number, Vacation and Heaven Is a Place on Earth among other tunes less familiar to non-Go-Go’s aficionados but pleasing to the ears nonetheless.

There’s fine work by the cast, led by Jaclyn Amber as Mopsa, who demonstrates her beautiful voice on Vacation and other songs. Carrie Wenos Priesmeyer shows her savvy way around a song as Gynecia with a jazzy riff on Heaven Is a Place on Earth, joined by Zachary Allen Farmer as the brooding Basilius.

Tielere Cheatem is convincing as the non-binary Pythio, leading the ensemble on the number Vision of Nowness, and Grace Langford finds the humor in the role of Pamela. Clayton Humburg is an earnest Musidorus, Melissa Felps is fine in the role of Philoclea and Aaron Allen hams it up as the annoying Dametas.

The time for Head Over Heels is described as “Nowhen” in the New Line program. With the music of The Go-Go’s, it’s definitely a good time, indeed.