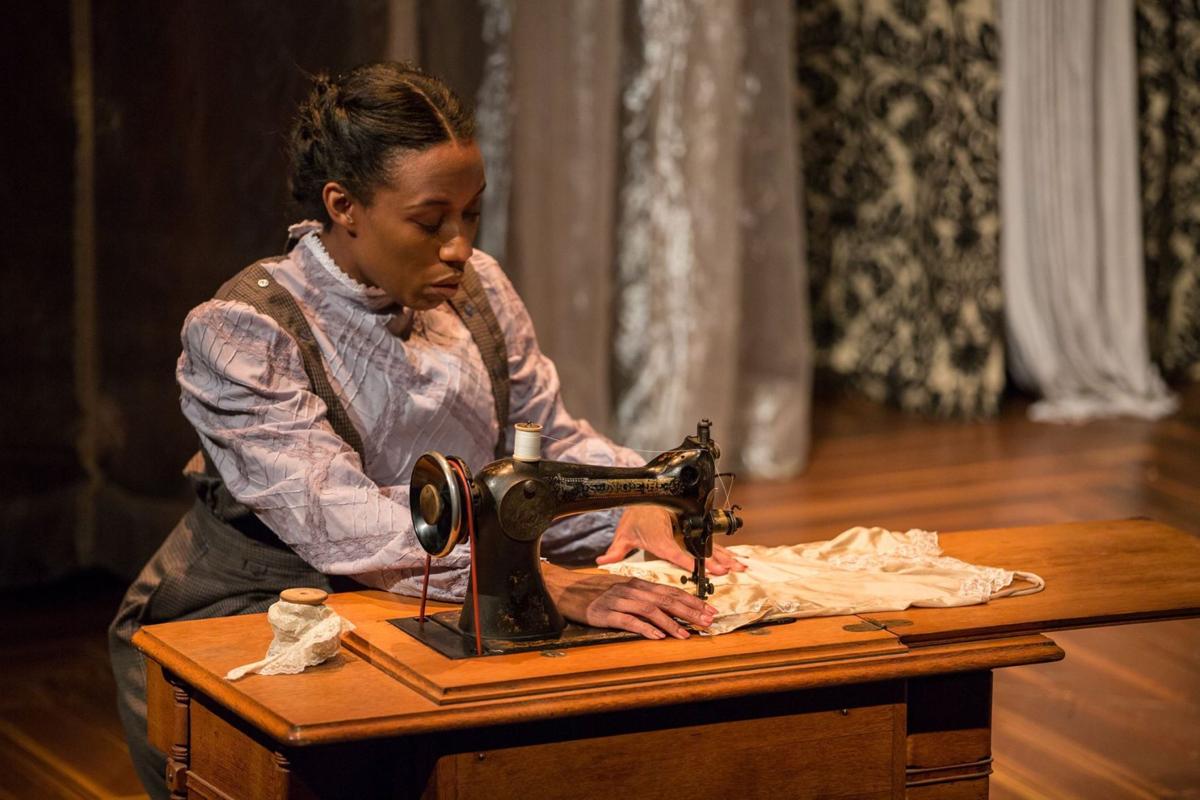 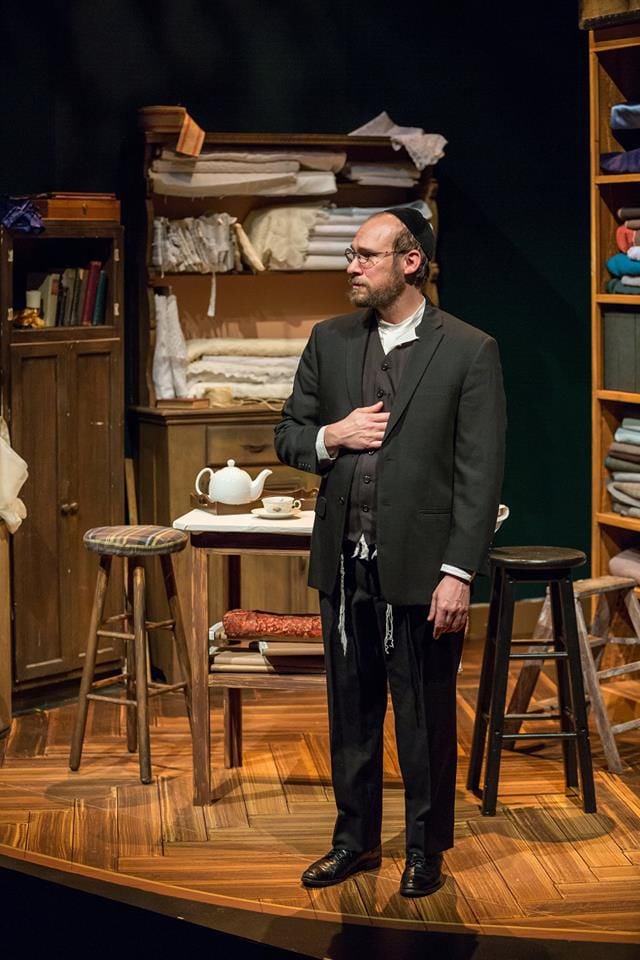 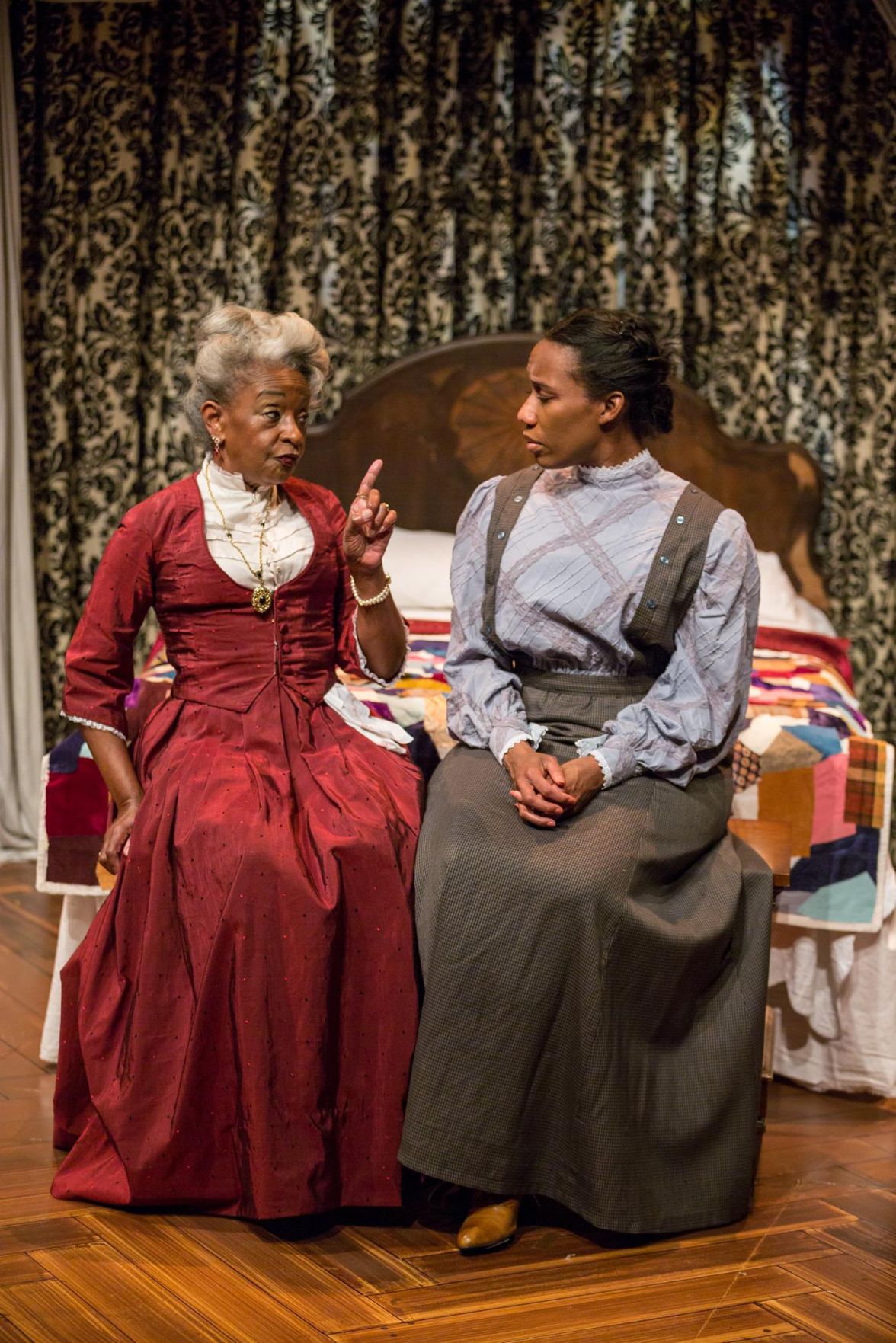 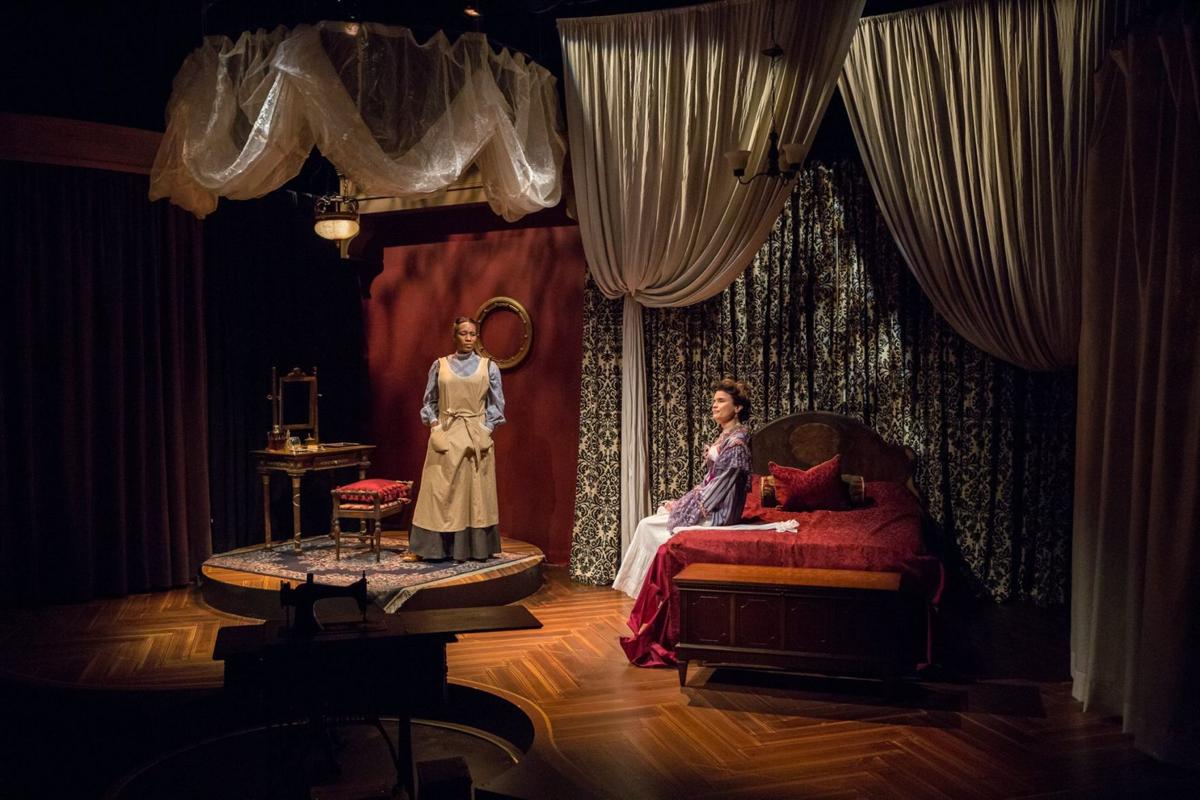 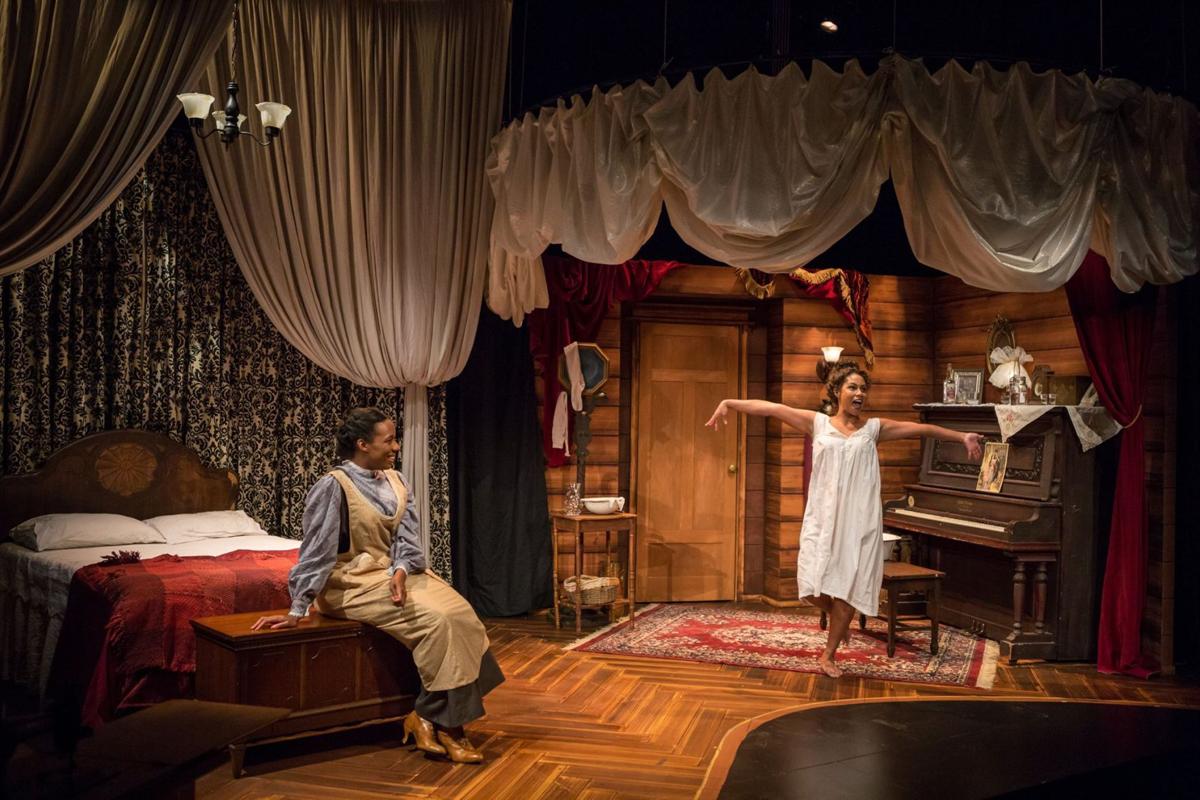 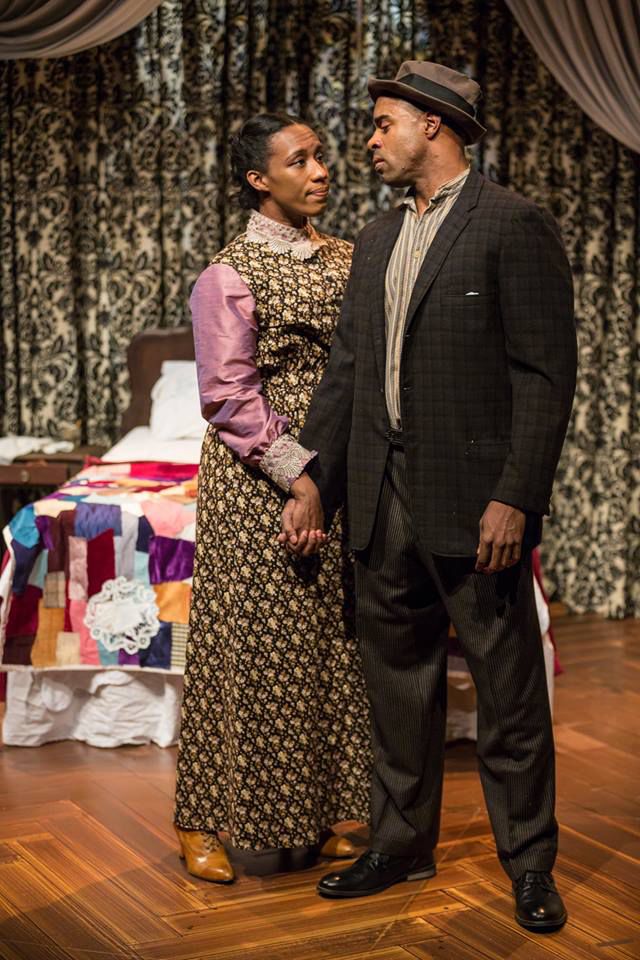 Story: Esther’s services are in great demand in New York City, circa 1905. The 35-year-old African-American seamstress migrated from the South in the 1880s to make a career for herself. She dreams of owning her own shop that caters to the beauty wishes of black women, just as so many stores display clothing and accessories favored by affluent white ladies of the time.

For 18 years, though, Esther has made her living sewing intimate garments worn by women of all social strata, including clothing worn by brides who stir envy within Esther’s good-natured soul. She lives in a boarding house run by an older black woman named Mrs. Dickson, who is grateful for Esther’s refined and intelligent company.

Esther’s loving nature and non-judgmental friendship also are valued by a prostitute named Mayme as well as by a wealthy customer named Mrs. Van Buren. She’s especially enchanting to Mr. Marks, a lonely Jewish merchant from whom Esther buys the material she uses to sew her dazzling creations.

Marks’ future already has been decided for him, as his family has arranged his eventual marriage to a woman in Europe whom he has never met. He shares a love of the finer material in his inventory with Esther, always joyful to see her and share just a few minutes of time with this intelligent woman who shares their mutual admiration. Their backgrounds, however, prohibit any closer relationship.

When Esther receives a letter one day from a Caribbean worker on the Panama Canal, she begins to correspond with the stranger, who says he learned about her from a man at her church. When the long-distance correspondence results in Esther’s long hoped-for marriage, though, she realizes that ‘George’ may not be the man she has envisioned in ‘his’ letters.

Other Info: Playwright Lynn Nottage based her 2003 drama partly on the life of her own great-grandmother, a seamstress at the turn of the 20th century in New York City who had married a man from Barbados. A photograph of several serious-looking ancestors intrigued her to research Gotham in the “Gilded Age” and inspired her to write this deeply affecting, two-act drama.

Loneliness is at the core of Nottage’s beautifully written story. Her six characters each grapple with the stifling suffocation of lives unfulfilled in an industrially exploding society that is filled with hustle and bustle but often is mired in emotional poverty.

It’s fascinating to observe how Nottage’s characters may come from different social strata but all suffer from the same longing for love and elusive social connections. Esther’s basic decency and kindness shine through her contact with others, yet requited love remains elusive, as it does for the attentive Mr. Marks, who honors his religious tradition at the expense of his own happiness.

Whether it’s the wealthy Mrs. Van Buren struggling to put a happy face on her loveless marriage to an indifferent magnate, the prostitute Mayme wasting her considerable talents as a pianist while turning tricks to pay the bills, or the simple laborer George, who yearns to work in a construction trade in New York only to be turned away repeatedly because of his skin color, the characters of Intimate Apparel are a sextet of spheres that only occasionally come together.

New Jewish Theatre’s presentation takes place on a cleverly designed set by Peter & Margery Spack, which showcases Marks’ store, Mrs. Van Buren’s tastefully adorned boudoir, Esther’s room at the boarding house, Mayme’s bedroom at her place and a tiny area where George expresses his thoughts to Esther, across the stage from audience left to right, respectively.

With the help of Sean Savoie’s judicious lighting, scenes between various players are highlighted while other areas are deliberately left dark. Michele Friedman Siler expertly dresses the players in the undergarments referenced in the title at times, such as Mrs. Van Buren and Mayme, but also has a keen eye for Mr. Marks’ purposefully dark clothes and George’s utilitarian togs.

Jacqueline Thompson delivers a heartbreaking, deeply affecting portrayal of Esther, whose love for Mr. Marks is palpably denied consummation by the strictures of their era. She braces her body as tightly as the corsets her character designs, revealing in her face the loneliness that grips Esther.

Jim Butz achingly conveys the frustrations and sad life of the kindly Jewish merchant, who recoils against the physical desire he feels for the warm and caring black woman who is his favorite customer and his best friend.

Julie Layton succeeds at making Mrs. Van Buren a compelling character in her own right, excelling at showing the subtle signs in Van Buren’s own elusive relationship with her seamstress. Likewise, Andrea Purnell makes Mayme a sympathetic and forlorn character, pulling back from Mayme’s occasional impulsive reactions to Esther’s comments to reveal the woman’s genuine admiration for her simpler friend.

There’s also wonderful work by Linda Kennedy as the wise Mrs. Dickson, who tells Esther about the travails and trials she’s endured in her own life, and by Chauncy Thomas as the opportunistic George. Thomas turns George from a genial, decent sort in Act I to a much more complicated, albeit understandable, villain in the second act, but one whose shallowness comes in part from his own experiences with degradation.