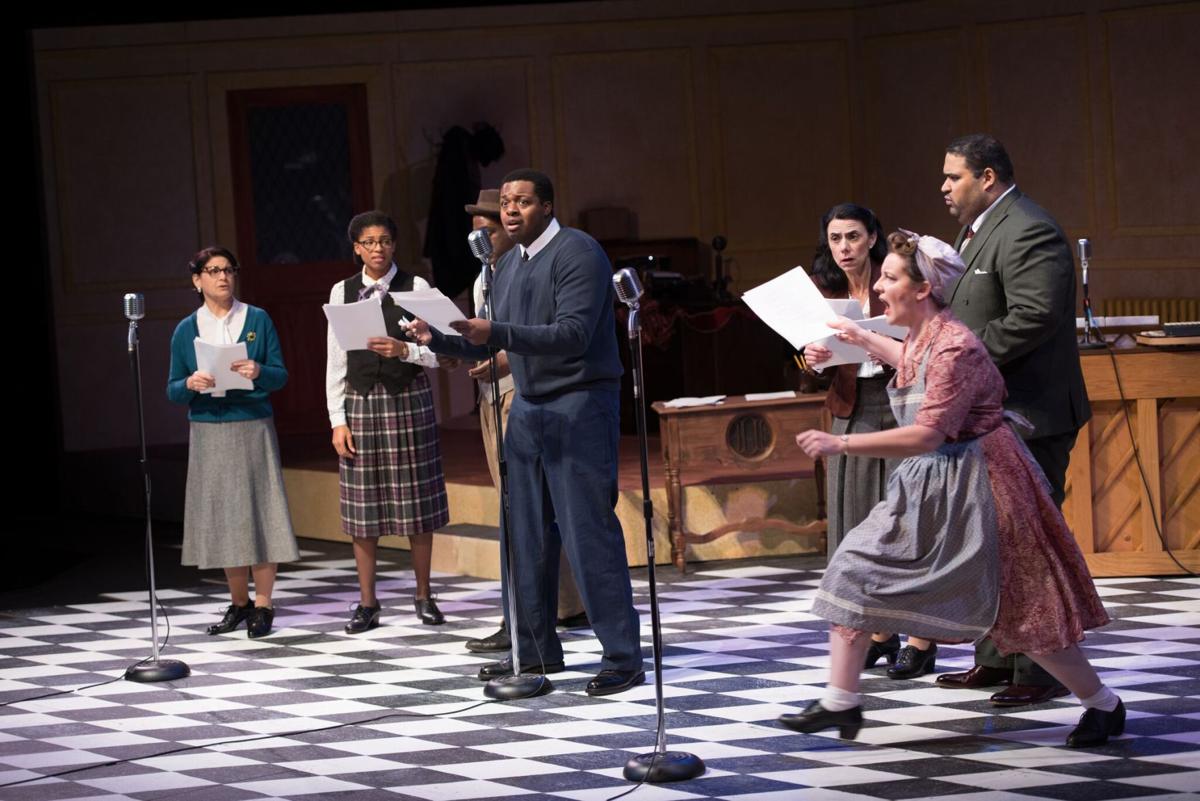 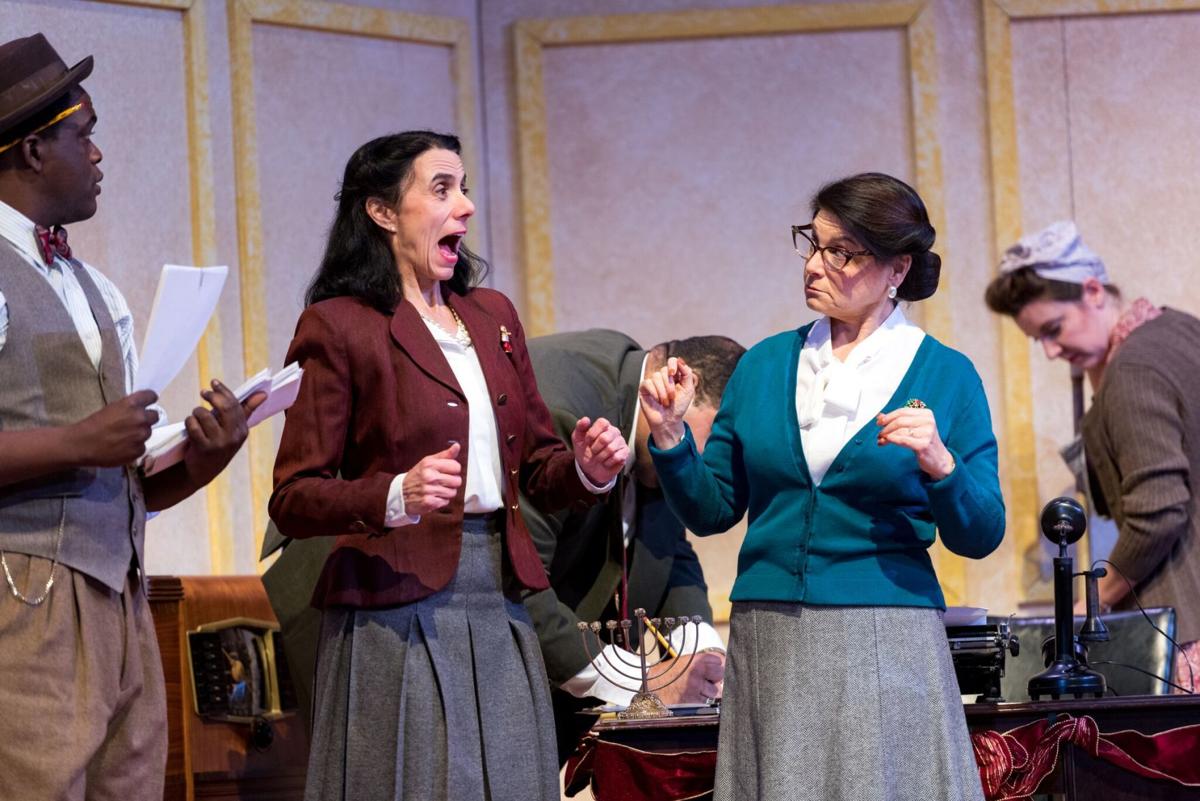 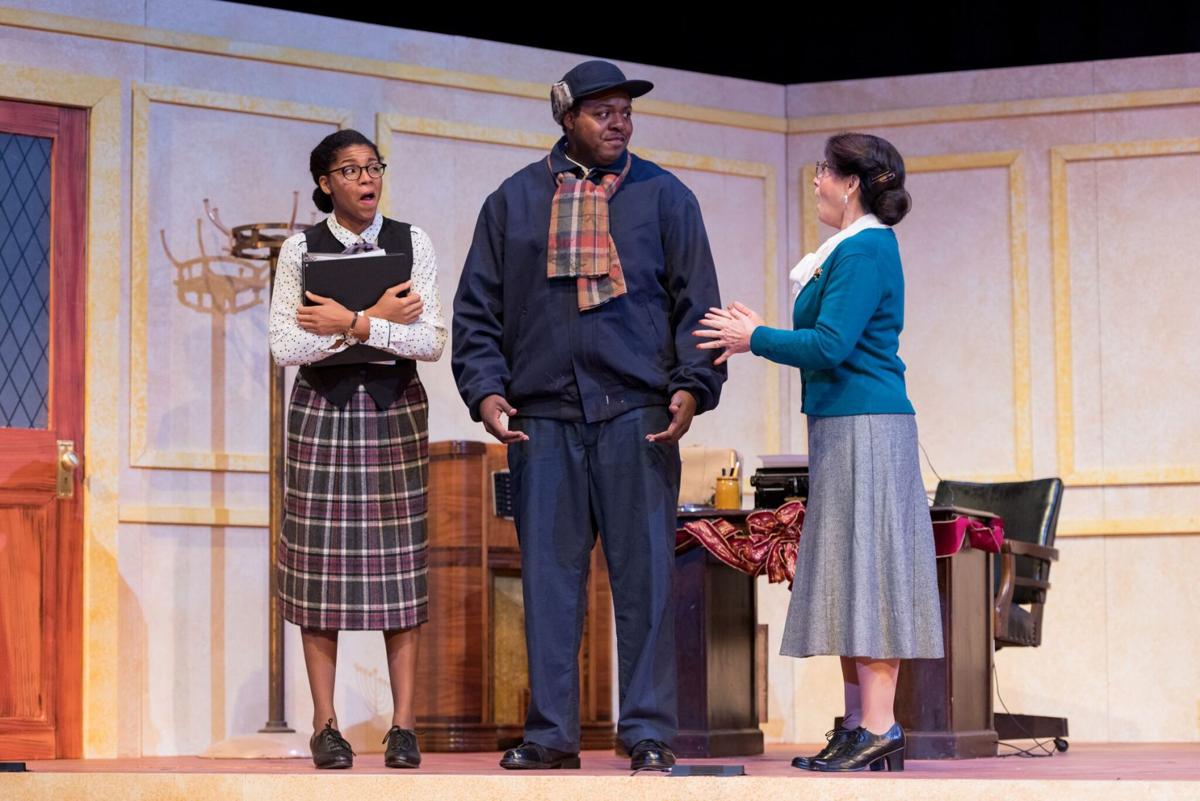 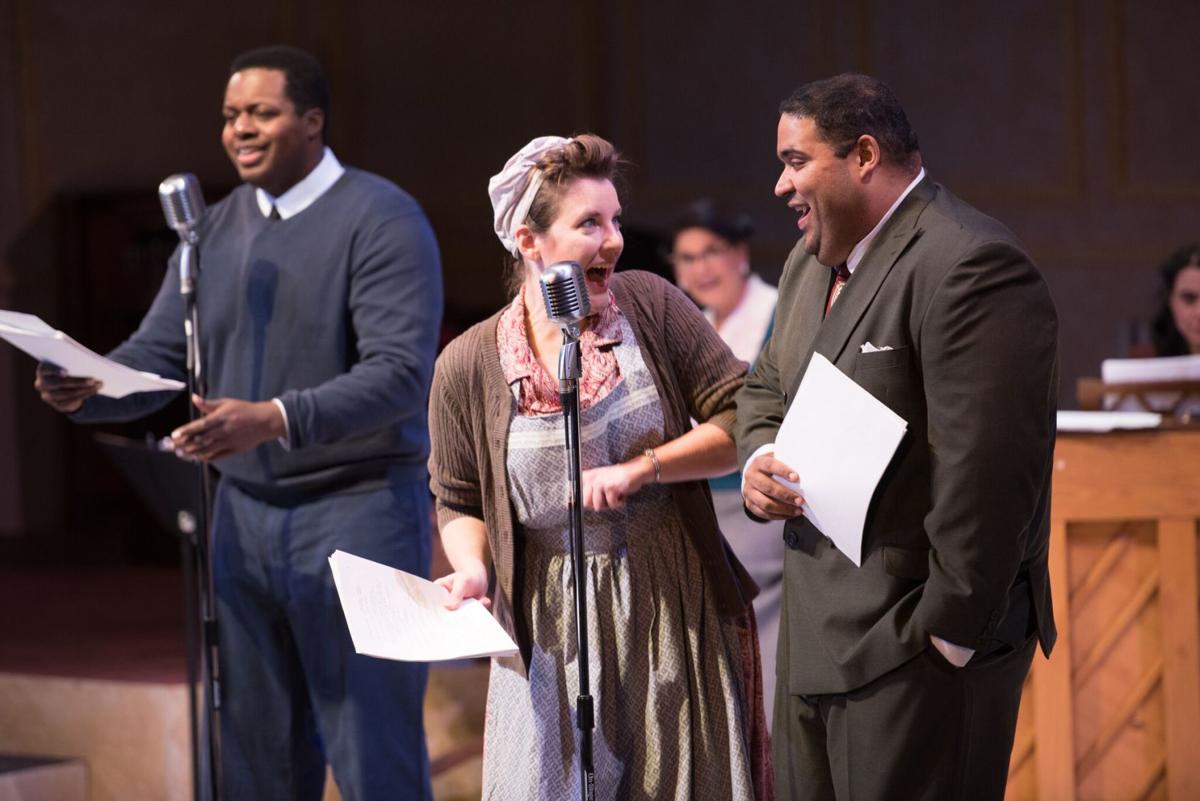 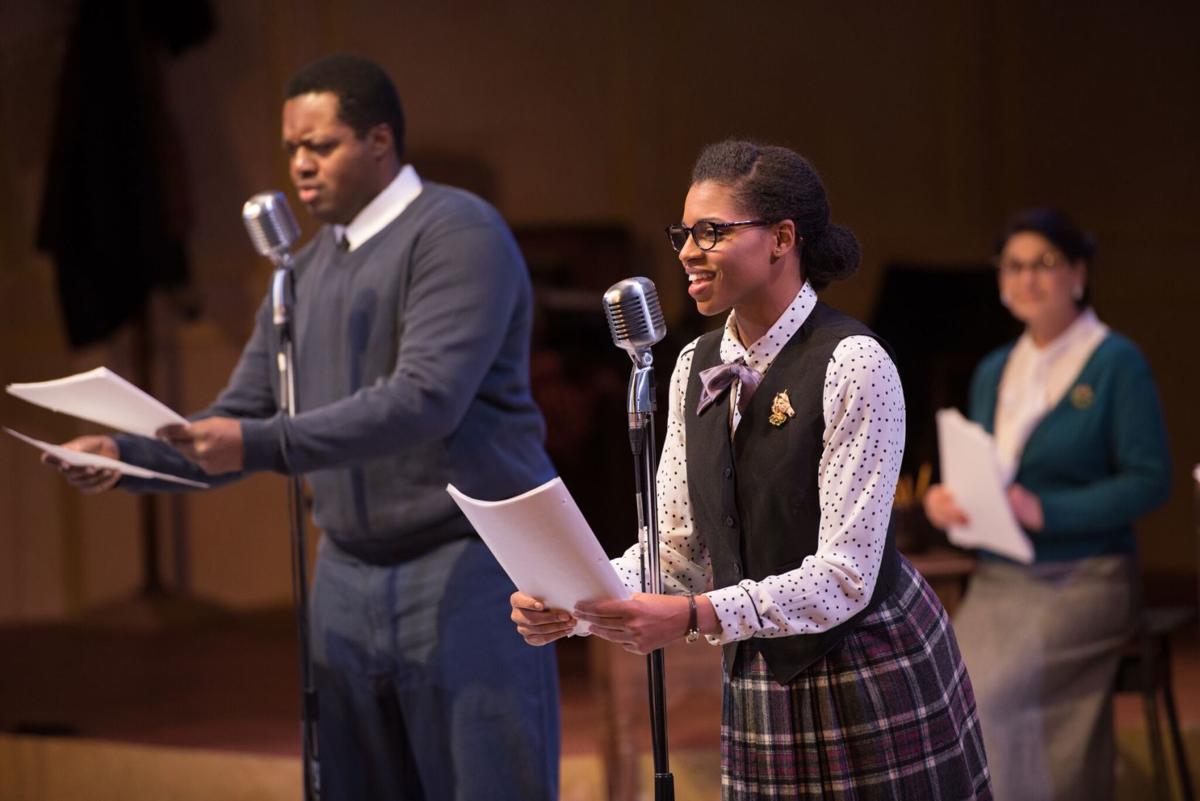 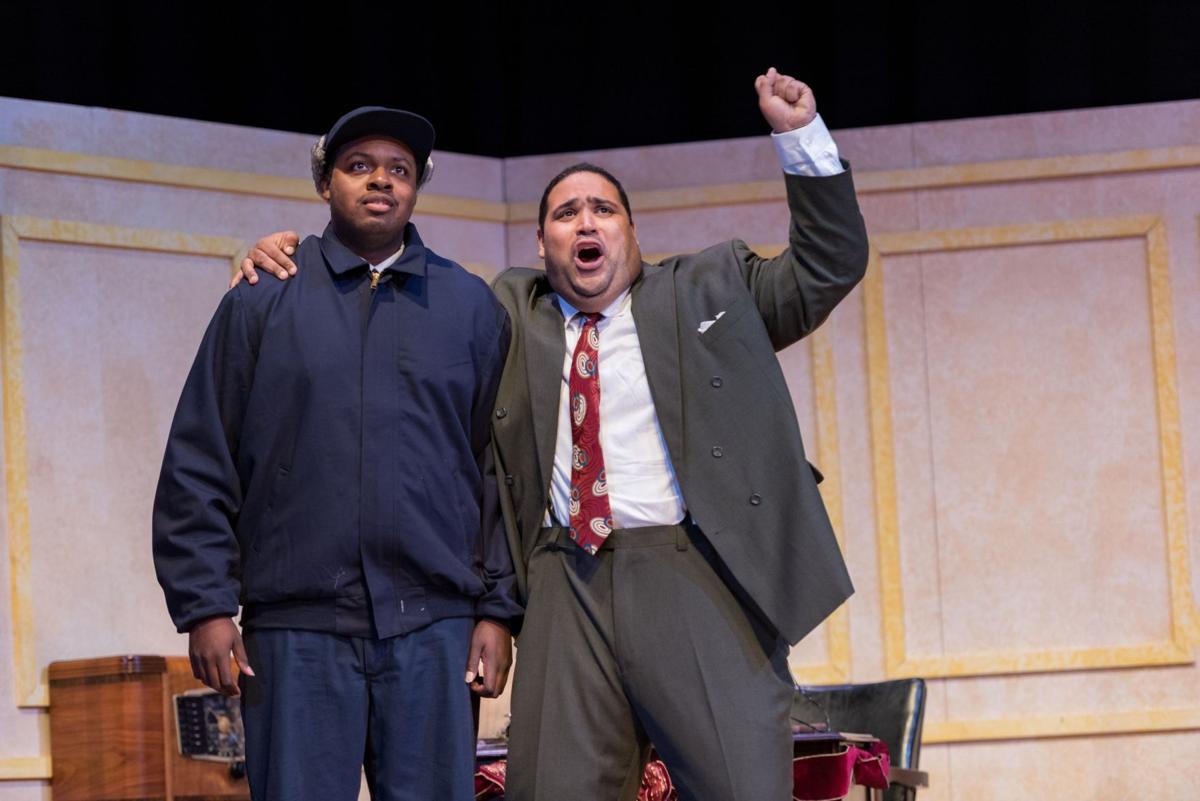 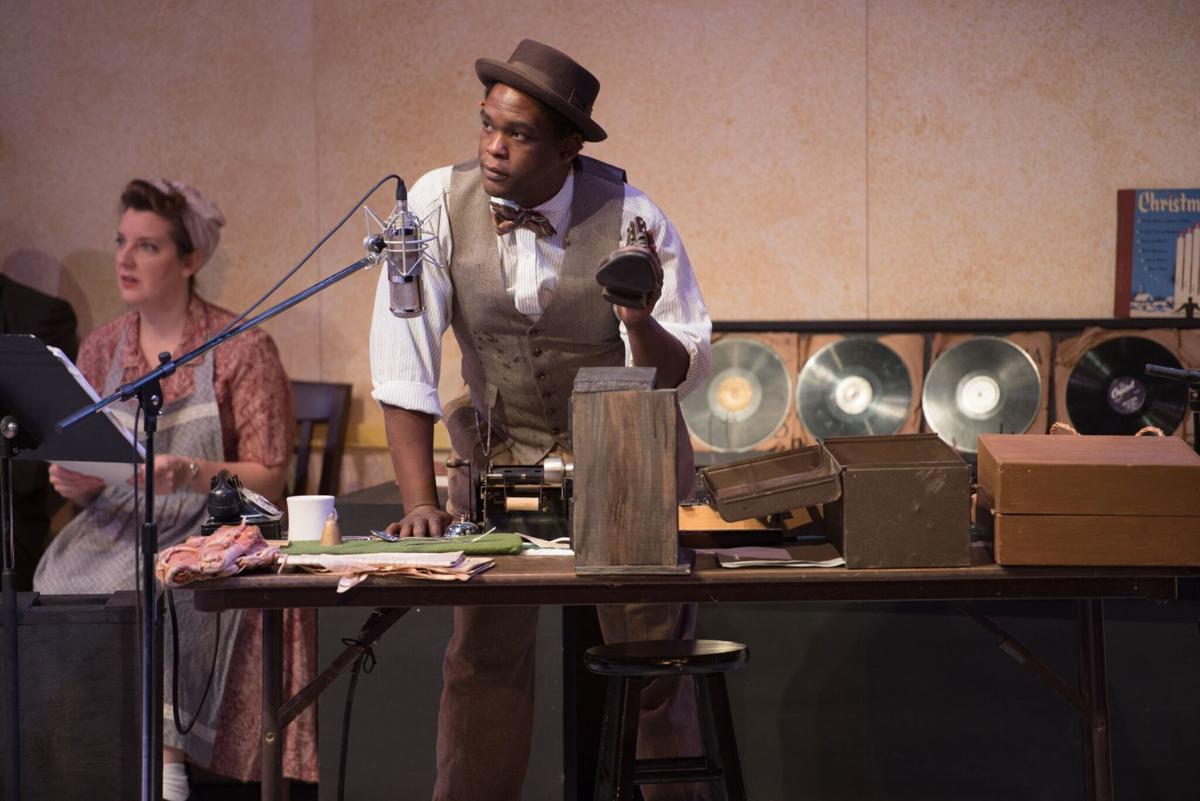 Story: It’s almost time for KMTC Radio’s 'live' annual broadcast version of It’s a Wonderful Life on Christmas Eve, 1949. There’s a big problem, however: The cast made the unfortunate decision to eat the tuna melt special at a nearby cafe for an early dinner and now they’re all too sick to perform.

Disaster! Will the station be forced to cancel its popular holiday presentation? Despite some shaky knees and initial hyperventilation, staff writer June Kelly convinces the in-house staff to divide up the roles in their adaptation of the beloved holiday classic.

Station announcer Chester Collins confidently informs June that he’s an “actor” and can assume any role. Ruby the janitor says she’s leaving the studio promptly at 7 p.m. because that’s when she always finishes her shift. Floyd Rogers, the sound effects specialist, assures June he can deliver the goods with appropriate noises at the right times in the script.

Receptionist Minnie Hoople volunteers that she plays piano and can paint the ivories on the house baby grand to bolster their effort, and station manager Vera Hayes is ready to give it the old college try, too.

All they need is someone to play George Bailey, the intrepid banker of Bedford Falls and lead character in It's a Wonderful Life, who considers suicide when crotchety town businessman and bully Mr. Potter informs George that his insurance policy makes George worth more dead than alive in George’s direst hour of need.

James Stewart is nowhere to be found, but what about delivery man Walter Bell? He shows up at the station with a package which he says is his final job for the day before he heads home to have dinner with his wife and daughter and listen to the KMTC broadcast himself.

After some initial hesitation, Walter is swayed by Vera’s and Minnie’s entreaties to be the broadcast’s star figure, George Bailey. Can these behind-the-scenes folks and a friendly messenger pull off a real-life radio broadcast? In front of a huge studio audience, no less? Stay tuned.

Other Info: Metro made a smart decision by not simply producing the play version of Frank Capra’s beloved 1946 cinema classic. It’s often difficult for an actor to compete with an iconic screen performance, such as Stewart's Bailey, which is indelibly etched into the psyches of audiences checking out a stage effort.

Instead, playwright John Wolbers utilizes the backdrop of a 1940s radio station in St. Louis, (KM(etro)T(heater)C(ompany)), and the halcyon days of “live” radio broadcasts of dramas, comedies and other works of entertainment in the years before TV took over American living rooms.

Perkins’ contributions include a marble floor for the station on the spacious stage, which also can accommodate a desk and chair in back alongside audio equipment, an area at stage left where “Foley artist” Floyd can create sound effects, like his namesake description did decades earlier, with a trash can, sandbox, etc. There are also a coat rack and another desk at stage right and three microphones in the middle for the radio play’s performers.

Bird’s costumes greatly enhance the look and feel of the presentation, from the hairstyles adorning the players to the era-appropriate office attire and even Ruby’s white socks and bandana. Wandall adds sound designs which effectively underscore the goings-on, while Orr adds nice touches such as Ruby’s mop and old-fashioned typewriters and telephones.

Adams’ lighting is highlighted by the signs above the audience, including one indicating “applause” by audience members when it lights up (which unfortunately stayed on for a long stretch at one point on opening day, albeit with no interruption in the performance).

Wolbers’ script retains a number of memorable lines from the film but also has its focus properly on the players in the radio production to its great benefit. Flood’s direction is well-paced and keeps everyone moving smoothly across the stage, allowing the audience to enjoy not only the speakers but also other characters and their reactions away from the microphones.

Acting is delightful by the entire ensemble, led by Alecia Reve Like’s winning portrayal of relentlessly optimistic scriptwriter June. Carl Overly Jr. is a hoot as station announcer Chester Collins, who protests that George’s guardian angel shouldn’t be ‘Clara’ but rather that “Clarence is a man!” and confidently assures June that he can handle any assignment because he’s a professional.

Abraham Shaw is convincing as the easy-going delivery man Walter, who steps up to the plate and hits a home run as a fill-in George Bailey. Roxane McWilliams delightfully zips about the stage to the in-house piano while handling sundry office chores, while Nicole Angeli brings vivacity, imagination and a treasure trove of laughs to the role of Ruby, who finds she rather likes this acting stuff.

Mindy Shaw does well as common-sense Vera, who instills a sense of order and composure to the station’s unexpected ‘surprises’ for its annual broadcast, and Chris E. Ware is entertaining as the hard-working Floyd, who also takes on the roles of Sam Wainwright and Mr. Martini, among others.

Metro Theater Company’s It’s a Wonderful Life brings an hour or so of a captivating and classy good time to an appreciative audience, a terrific start to the holiday season. Don’t forget to clap on cue.