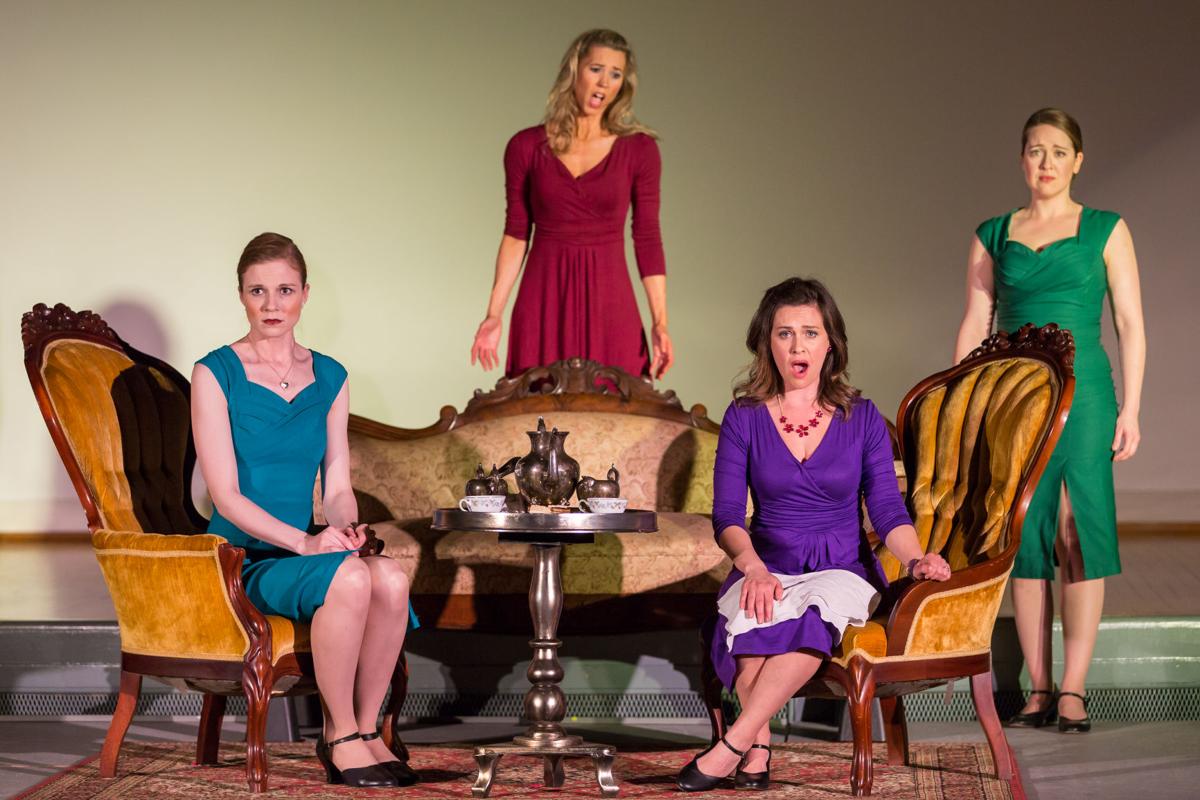 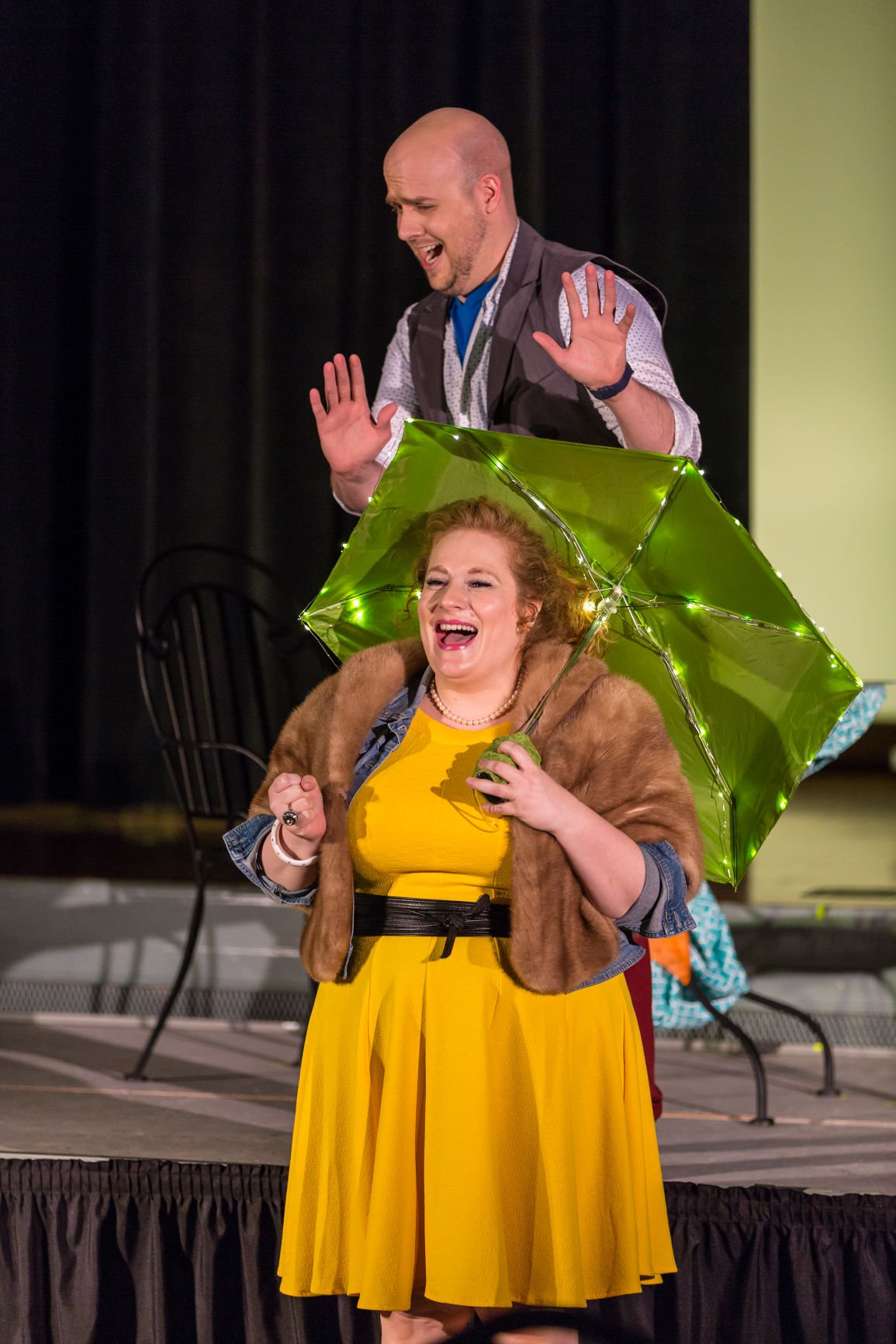 Story: In The Break-Up, Jake and Debbie are a young couple who look at their relationship from drastically different perspectives. Jake has decided to break off their romance and already is anticipating the assignations he’ll be having as a newly freed ‘single’ guy. Debbie looks forward to their weekly dates, but when Jake springs his unpleasant news, she reacts in ways he didn’t expect.

The Clever Artifice of Harriet and Margaret probes the mind games that are played between two women, each determined to accomplish her agenda without the knowledge of the other.

Highlights: Gateway Opera opened its third season last weekend with a pair of pleasant and well crafted pieces that were wrapped up in a tidy 90 minutes, including intermission. Briskly paced by directors Em Piro (The Break-Up) and Allyson Ditchey (The Clever Artifice), they showcased the talents of some very accomplished singers who did justice to this pair of contemporary short works.

Other Info: The Break-Up, with music and libretto by Eva Kendrick, received its premiere in a solo concert by San Francisco Opera bass-baritone William O’Neill in January 2015 and has since been performed twice elsewhere before receiving its Midwest premiere by Gateway Opera.

It’s a brief but funny piece, and featured some truly stellar singing by Susan Fletcher as the self-assured Debbie, who reacts none too mildly when Jake springs his surprising news on her. Fletcher, who also fronts a rock band called Scarlet & The Harlots, possessed a powerful and persuasive soprano that she wielded like a weapon, as well as a flair for emphasizing Debbie’s comic moments.

Baritone Kurtis Shoemake played the role of Jake with an emphasis on his character’s thick-witted thinking and a sure touch with Jake’s comic elements. Dressed like he just fell out of bed, courtesy of Fox Smith’s astute costume design, Shoemake’s deep voice accentuated Jake’s unintentional humor by playing up Jake’s cocky opinion of himself, then just as surely reversing form when Debbie drops him like yesterday’s news.

Smith offered a gaudier approach to Debbie’s wild attire, which matched her confident demeanor. With pianist and music director Robert Valentine providing solid assistance, Fletcher and Shoemake made for an amusing couple in this sprightly and upbeat piece.

A much more serious tone pervades Leanna Kirchoff’s work, The Clever Artifice of Harriet and Margaret, which had its world premiere at the University of Colorado in November 2013 and was the winner of the 2014-16 National Opera Association Chamber Opera Competition.

Based on Overtones, a play by Alice Gerstenberg published in 1913, the story concerns two old acquaintances, Harriet Goodrich and Margaret Caldwell. Harriet once loved a young artist named John Caldwell, but decided to marry for money instead and became the wife of the wealthy Charles Goodrich. Caldwell later married Margaret.

Both Harriet and Margaret are influenced by their inner selves, Hetty and Maggie. Hetty has long been disappointed that Harriet didn’t marry the artist, and sees Margaret’s visit as a way for Harriet to get back into Caldwell’s life.

Maggie says to Margaret that she should carefully suggest to Harriet that the latter have her portrait painted, thus allowing Margaret’s husband access to Harriet’s society friends for further economic opportunities.

Feazel’s lighting is a key element in this piece, framing silhouettes of the four characters off of the large, looming background wall. Costume designer Niki Newcomb dresses the characters in pairs, with the ‘inner selves’ of Hetty and Maggie complementing their primary characters of Harriet and Margaret.

There’s a languid pace to this longer (45 minutes) effort, but director Allyson Ditchey maintains interest throughout by eliciting captivating performances by her ensemble, although the piece can fall into the ‘precious’ category at times.

Erika Cockerham is poised and refined as the elegant Harriet but also conveys the woman’s revived interest in Margaret’s husband. As Margaret, Gina Malone presents a buoyant optimism in better days for her and John, while Leann Schuering and Allison Glass capture the mischievous personalities of Hetty and Maggie, respectively, with charm and humor.

Valentine’s musical direction is steady and underscores the poignancy of the composition that he plays with grace and polish as accompanying pianist.

Artistic director Kate Reimann did a fine job finding and pairing these two splendid works by a pair of rising young operatic composers, getting Gateway Opera’s 2016 season off to a fine start.

Next up is a presentation of Lucrezia, by composer William Bolton and librettist Mark Stephen Campbell, on April 8 and 9 at the 560 Music Center. For more information, visit www.gatewayopera.org.

Opera: The Break-Up and The Clever Artifice of Harriet and Margaret