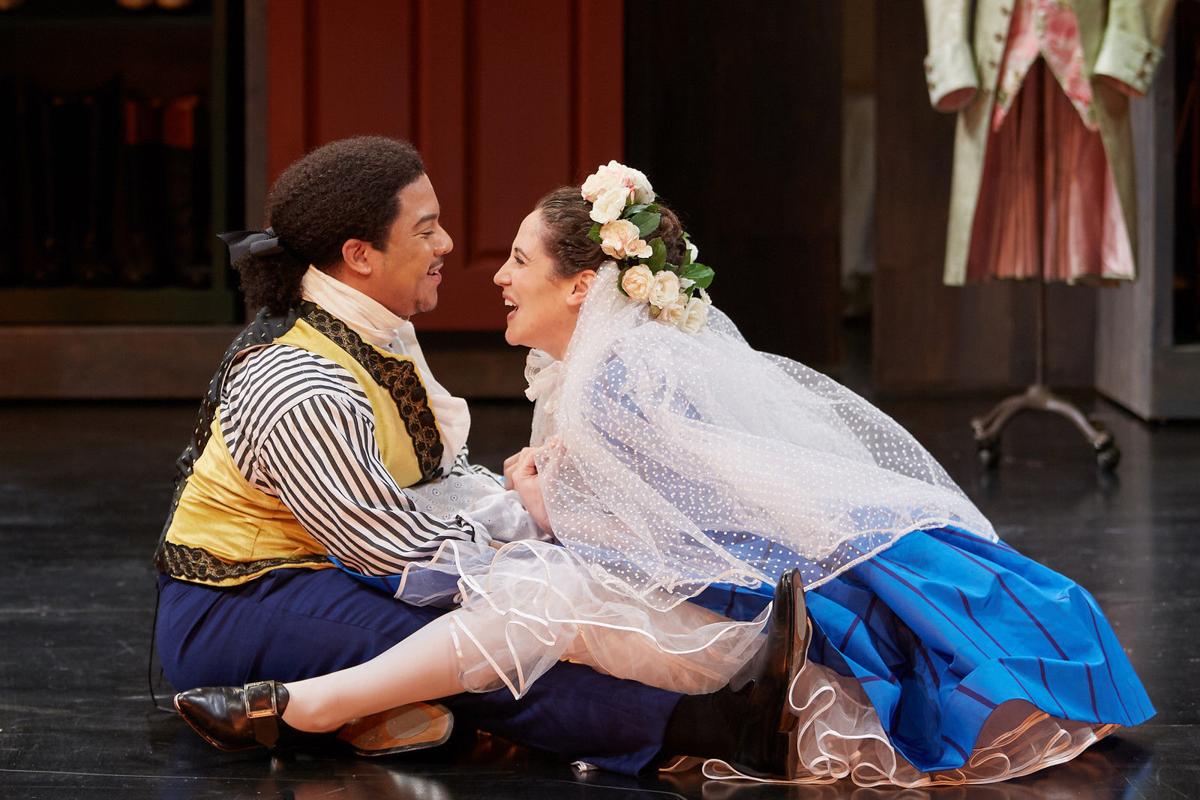 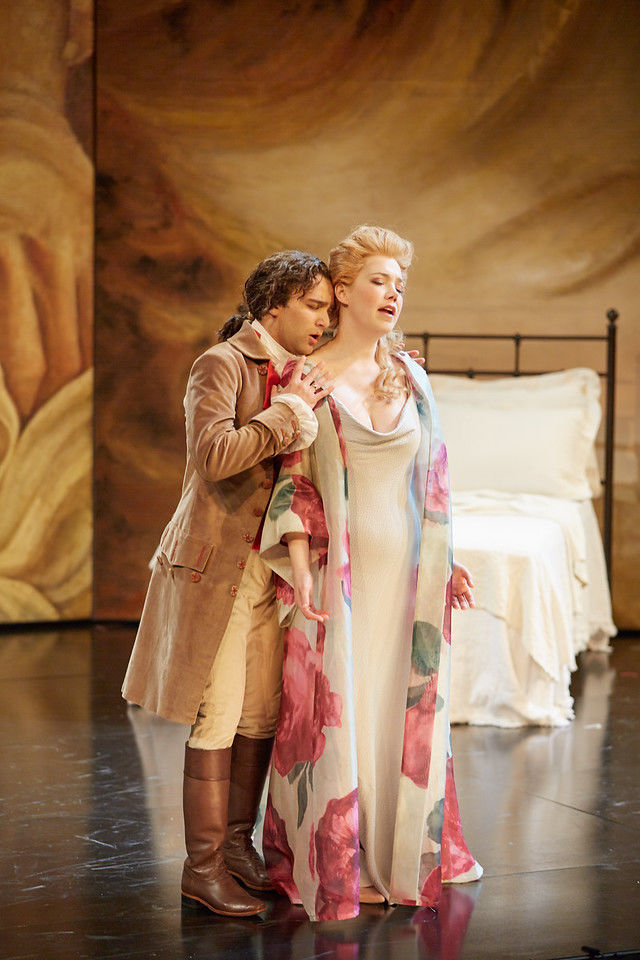 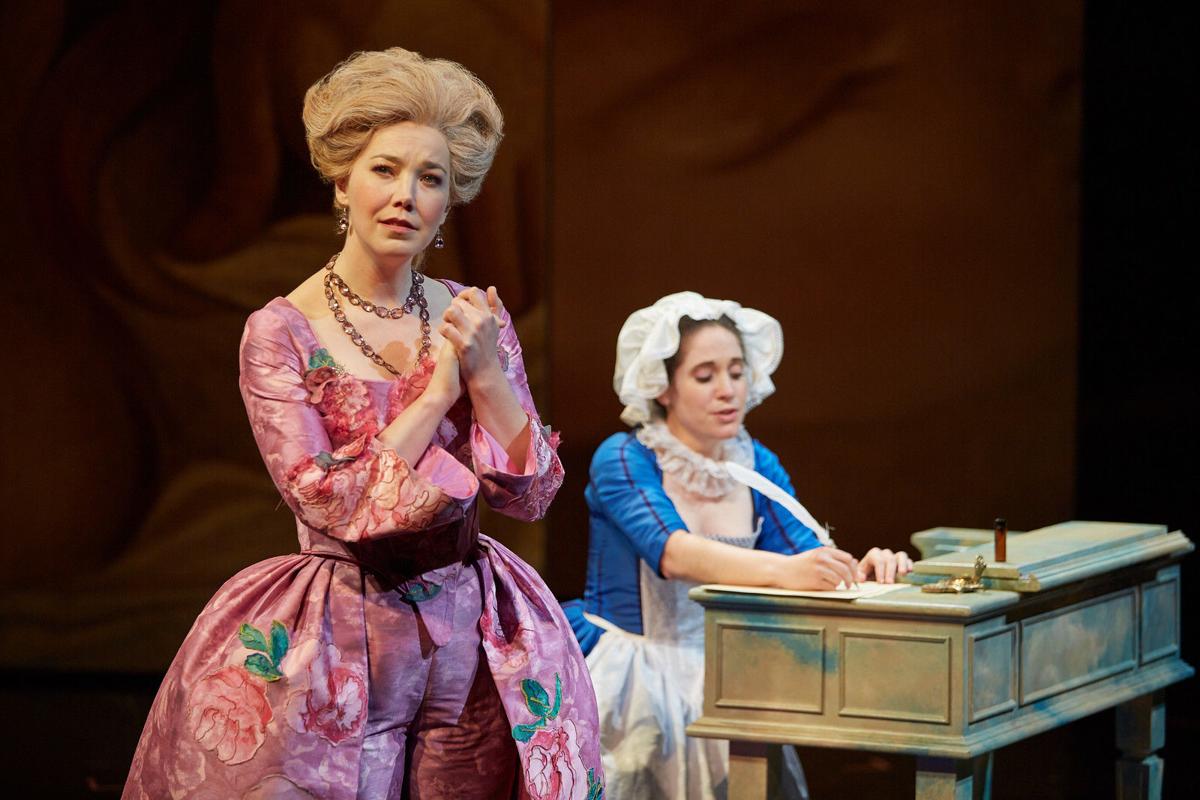 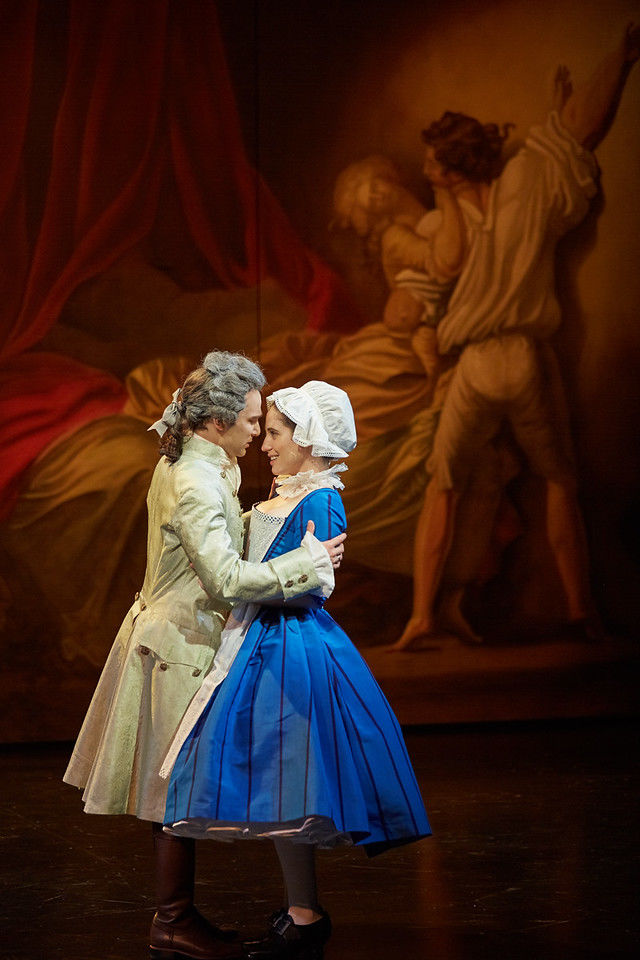 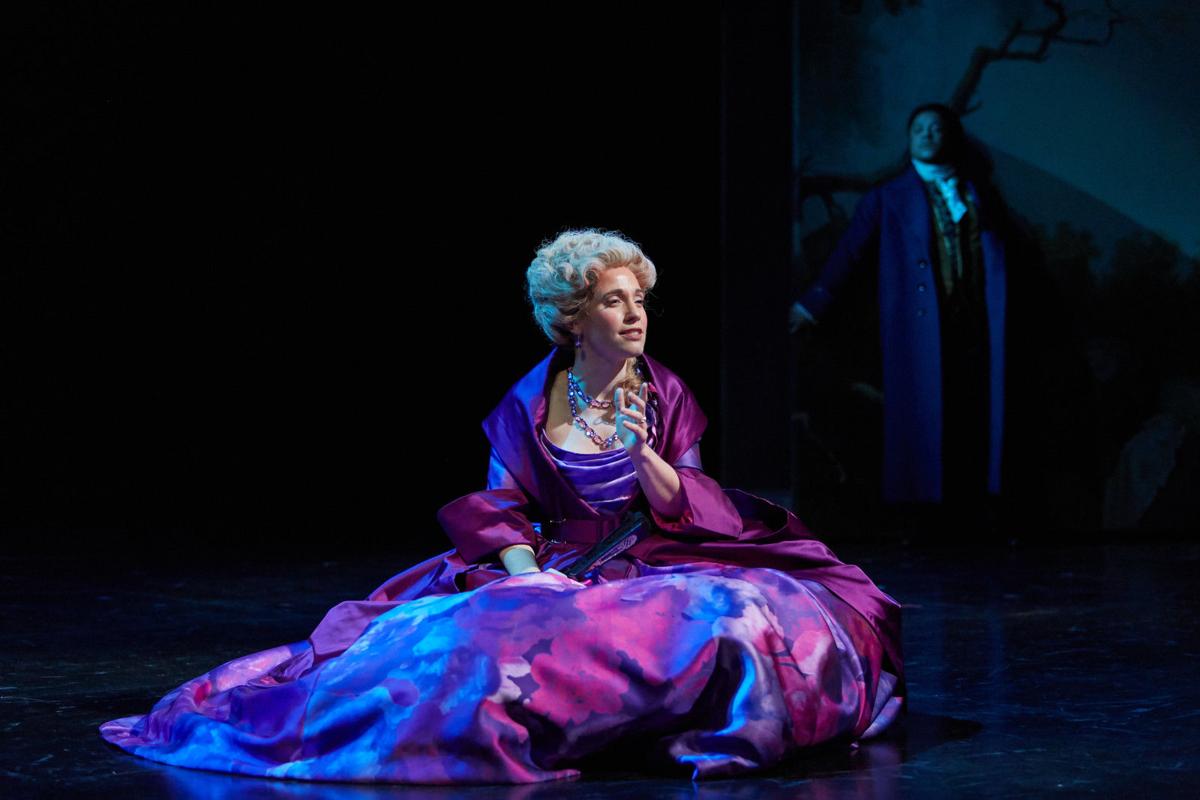 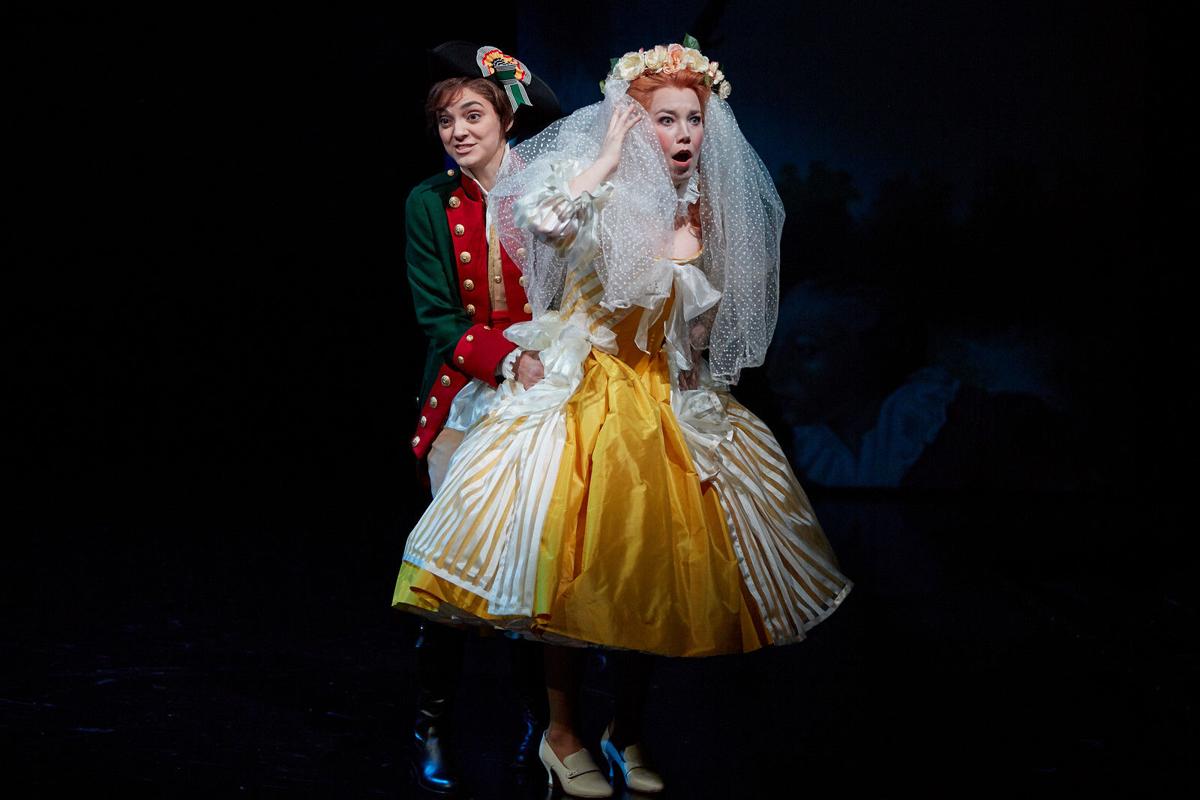 Story: Count Almaviva, a nobleman in 18th century Spain, has grown tired of his beautiful wife Rosina, Countess Almaviva. He decides to reinstate the archaic tradition of “feudal right,” which allows him to sleep with any servant girl on her wedding night before she joins her husband.

The Count desires Susanna, the feisty handmaid to the Countess, who is about to marry the Count’s valet, Figaro. Susanna and Figaro both are repulsed by the Count's idea, but that’s far from their only problem. Seems Figaro is in debt to Marcellina, the middle-aged housekeeper for Doctor Bartolo. Marcellina and Bartolo now demand payment by Figaro, either with the money or else as Marcellina’s groom.

While all of this is happening, the Count’s page Cherubino begs Susanna to intercede with the Countess on his behalf. He’s been caught cavorting with fetching servant Barbarina, daughter of the royal gardener Antonio. When music teacher and court gossip Don Basilio mentions that Cherubino also has a serious crush on the Countess, the jealous Count angrily dispatches his page off to war. Or so he thinks.

The Count wants his way with any woman he chooses but insists that Rosina be punished for any supposed infidelities. He vows that he’ll take what he desires, but Figaro, Susanna and Rosina concoct their own plot to foil Almaviva’s salacious intentions.

Along the way there are unexpected complications involving Cherubino, Barbarina, Antonio, Marcellina and Bartolo. Susanna and her fiance, however, are determined that the marriage of Figaro will take place.

Other Info: This marks the fifth time that OTSL has mounted a production of The Marriage of Figaro, which has graced the Browning Mainstage approximately every nine years since 1981. Mozart’s beloved opera buffa, or comic opera, takes place about three years after the setting of another of his famous operas, The Barber of Seville, with several of the same characters.

The Marriage of Figaro first was performed in Vienna in 1786 This version, directed by Mark Lamos, features a translation by Andrew Porter commissioned by OTSL from Lorenzo DaPonte’s original libretto.

OTSL’s current rendition features sumptuous replications of paintings by 18th century French artist Jean-Honore Fragonard who, according to Wikipedia, died in Paris in 1806 “almost completely forgotten” in the years following the French Revolution.

Those delicate Fragonard paintings make for a lush backdrop on panels that, when turned around, offer the look of a cluttered room, including a window at stage right, doors at left, center and right and furniture such as a bed and a chair for scenes where farcical entrances and exits allow for sundry misinterpretations by the characters to great comic effect. Credit Paul Steinberg for the intriguing set and Christopher Akerlind for the handsome lighting.

Lamos says that the look chosen by costume designer Constance Hoffman accentuates his beloved 18th century “with flourishes.” That accounts for why Marcellina looks like the Mad Hatter and why other characters are foppishly dressed to underscore the exaggerated comedy at hand, with a notable assist from wig and makeup designer Tom Watson.

Lamos keeps the pace lively and conductor/harpsichordist Christopher Allen leads the Saint Louis Symphony Orchestra in a spirited, whimsical delivery of Mozart’s witty score. That’s a fortunate combination for an audience which sits through four acts, one lengthy intermission and nearly three and a quarter hours from start to finish.

Sean Curran's sprightly choreography embellishes the production and Michael Rossmy's fight direction is put to amusingly good use by Monica Dewey in the role of Susanna.

Several outstanding voices are in evidence in the performance, which also features accomplished acting by the stars. Former Gerdine Young Artist Dewey excels as Susanna, bringing an accomplished soprano to several of the show’s pieces. She works nicely with another former Gerdine Young Artist, Aubrey Allicock, whose bass-baritone smoothly fills the role of Figaro, both in singing and acting.

Susannah Biller puts her excellent soprano to good use as Countess Almaviva, while another former Gerdine Young Artist, Theo Hoffman, proves his mettle not only with his convincing baritone but also in his comic portrayal of the lecherous Almaviva.

Samantha Gossard is particularly delightful in her OTSL main stage debut in the “pants role” of Cherubino, especially in one scene where she’s a woman portraying a man masquerading as a woman, all part of the women’s efforts to con the philandering Count. Lisa Marie Rogali and Jamie Groote sparkle in their scene as a pair of peasant girls singing while they are part of an entourage bringing flowers to the Countess.

The Marriage of Figaro has pretty much been in demand for close to 250 years, succeeding on the merits of its rousing music and universal themes of love, sex, jealousy and the comeuppance of the entitled class. This newest version by Opera Theatre of Saint Louis hits all the high notes with a flourish.

Opera: The Marriage of Figaro