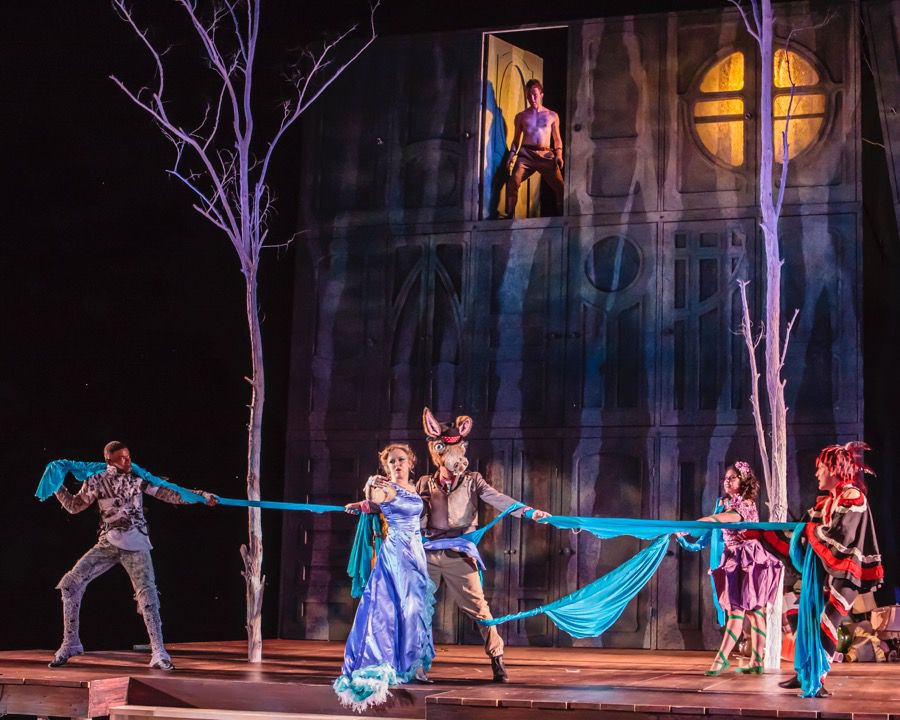 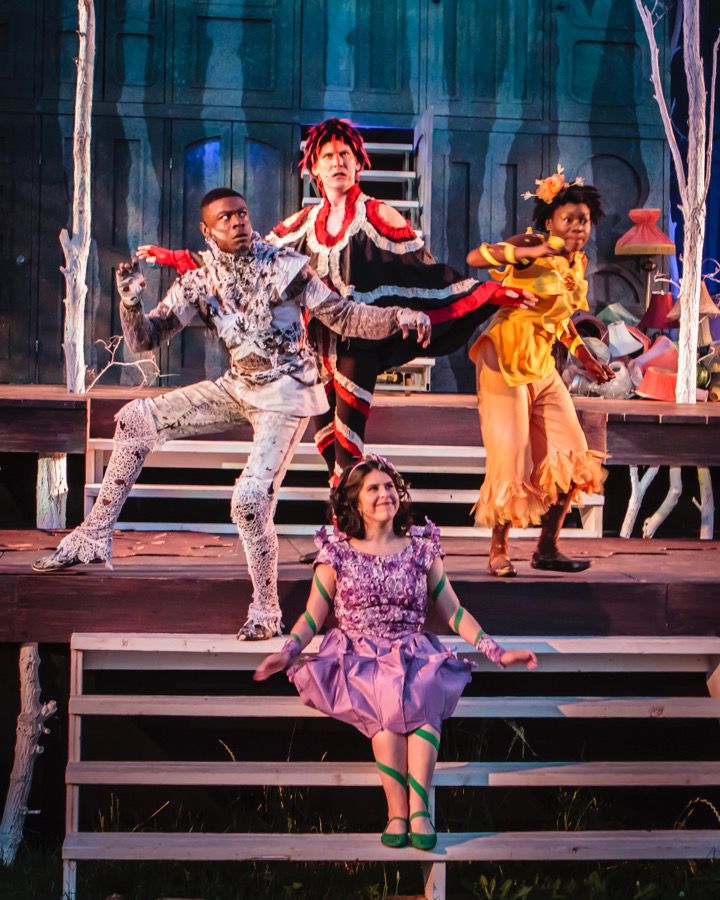 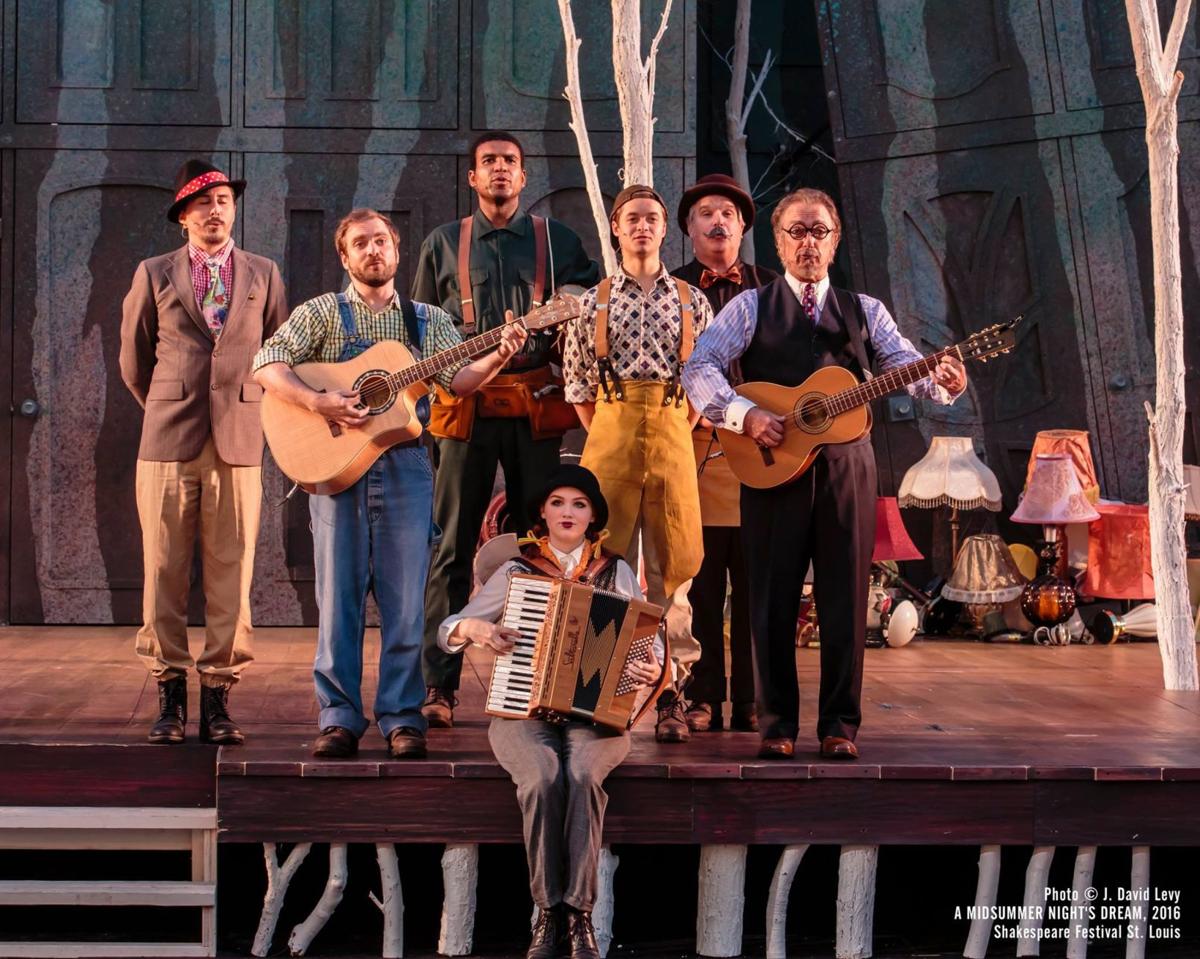 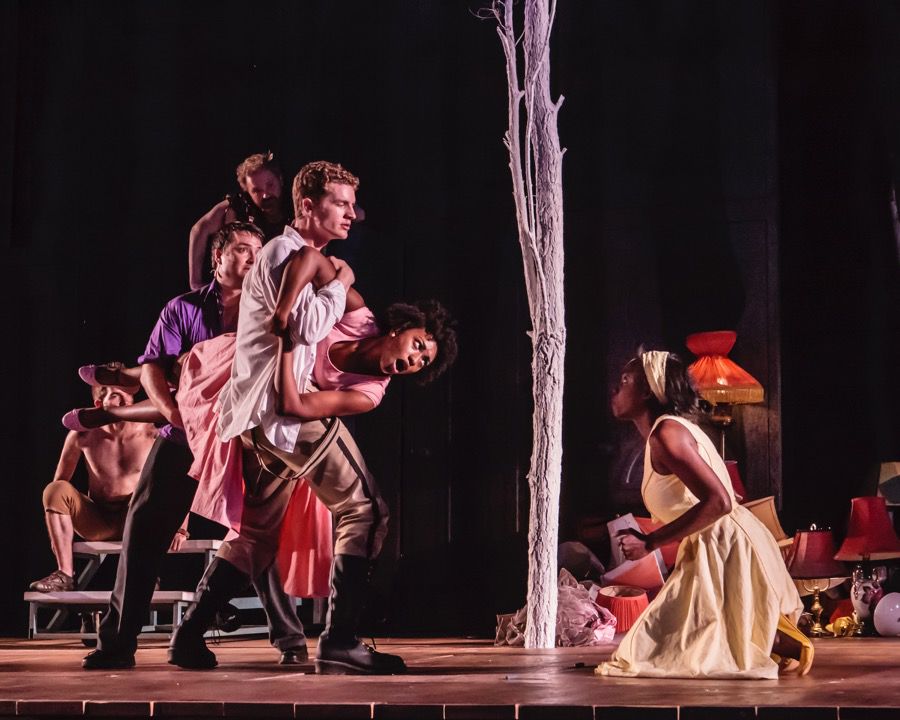 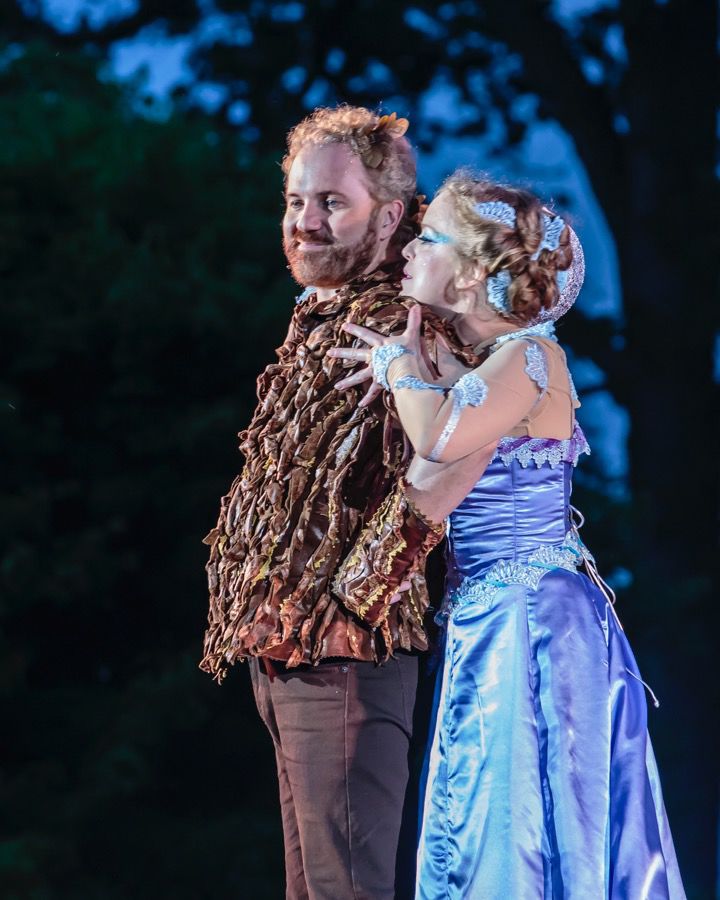 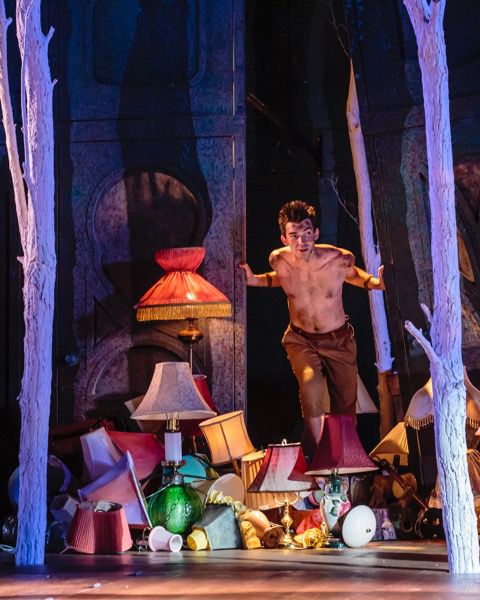 Story: Theseus, Duke of Athens, nervously prepares for his wedding to Hippolyta, Queen of the Amazons. He is approached in his court by a nobleman named Egeus, whose daughter Hermia wants to marry a young man named Lysander rather than Demetrius, the suitor selected by her father.

Demanding his rights as an Athenian father, Egeus informs Hermia that she will die unless she marries Demetrius. Theseus offers her a third choice: To join a convent for life. Given those options, Hermia flees to the nearby forest with Lysander, but first tells her friend Helena of their plans. Helena runs away as well, followed by Demetrius, who at one time had been betrothed to Helena and still is loved by her.

The forest is ruled by Oberon and Titania, king and queen of the fairies. When the royal sprite couple has a disagreement, Oberon informs his servant Puck to sprinkle a magic potion on the sleeping queen’s eyelids so that she falls in love with the first thing she sees upon awaking. That happens to be Nick Bottom, a weaver and one of the “mechanicals” who are rehearsing a play to be performed at the royal wedding. Puck turns Bottom’s head into that of a donkey before Titania awakes.

Puck makes further mayhem by sprinkling the potion on Lysander rather than Demetrius, causing Lysander to fall in love with Helena. After much confusion, Oberon oversees spells that unite Lysander with Hermia as well as Demetrius with Helena. Theseus finds the lovers in the forest and approves of their unions, then heads off to his own wedding and a performance of the mechanicals’ play in celebration.

Music composed for the show by Peter Mark Kendall along with Brian Seyle and music director Matt Pace of St. Louis-based The Rats & People Motion Picture Orchestra fills the summer air in Forest Park with a lilting elegance that contrasts nicely with the impish comedy of some of Shakespeare’s most humorous characters.

Other Info: Dildine keeps this familiar work moving along at a merry clip, benefiting from the affecting and well-situated songs written specifically for this production. Pace’s musical direction utilizes a variety of instruments, including accordionist Ashby Laws, who joins the troupe of thespian craftsmen as they regale the audience from time to time with their tunes.

There’s also a clever use of identical twins Austin Jacobs and Ryan Jacobs, two recent graduates of the Webster University Conservatory of Theatre Arts. Dildine employs the talented pair in the single role of Robin Goodfellow, alias Puck, who seemingly can be in two places at once, appearing almost instantly in two doorways on Scott Neale’s triple-tiered set comprised of adjoining doors, a la the old Laugh-In TV series.

Costumes designed by Dorothy Marshall Englis are bright and well-matched to the characters, elegant for the Athenians and colorfully wispy for the fairies. John Wylie’s lighting underscores the set, which extends out into the front section of the audience, and Rusty Wandall adds a well-appointed sound design.

Stephen Pilkington gets the lion’s share of laughs as the over-reaching Bottom, who believes he can play every role in the Pyramus and Thisbe play performed by the mechanicals. His death scene, or scenes, in the performance before the royal couple was long, exaggerated and milked for every laugh effectively by Pilkington to the uproarious delight of the audience on opening night.

Other members of the highly entertaining mechanicals include Alan Knoll as Snug, the slow-witted joiner who warms up to his role as a “lion”; Jay Stalder as Flute, who hesitantly assumes the part of the lady Thisbe; Reginald Pierre as Snout, the tinker who grandly assays the role of the “Wall”; Jerry Vogel as Starveling, the tailor who displays his musical talents as well as his adaptation as the “Moonshine”; and Michael Propster as Peter Quince, the carpenter who fashions his colleagues into intrepid actors or at least facsimiles thereof.

Timothy Carter brings a dominant presence to the role of Oberon, who is hard-pressed to match the seductive and imperious ways of Nancy Anderson as Titania. The latter proves herself adept at comedy in her amusing introduction to Bottom and his donkey head.

The young lovers are played in mostly frantic style by Cassia Thompson as Hermia, Pete Winfrey as Demetrius, Justin Blanchard as Lysander and Rachel Christopher as Helena. Paul Cereghino is amusing as the good-natured Duke of Athens, Jacqueline Thompson commands the stage as the iron-willed Hippolyta and Whit Reichert offers his best scowl as the surly Egeus.

Ben Watts doubles smoothly as Philostrate, the court’s Master of the Revels, as well as the fairy Moth. Others twinkling throughout the forest include Myke Andrews as Cobweb, Gabriela Diaz as Peaseblossom and Raina Houston as Mustardseed.

With additional tunes by Kenneth Pattengale, Joseph Ryan, Robert McFerrin Jr. and Justin Vernon, this version of A Midsummer Night’s Dream is a wise selection for the Shakespeare Festival’s nocturnal performances in our own magical Forest Park.

The price is right to visit and enjoy the show, as well as sampling some of Schlafly Beer’s Schlafly 1616, a brew made specifically for the Shakespeare Festival in honor of the 400th anniversary of the Bard’s death. Be sure to make time as well for the company’s Green Show and other entertainers before the play commences at 8 p.m.

Venue: Shakespeare Glen in Forest Park near the Art Museum

Dates: Through June 26 (except Tuesdays)