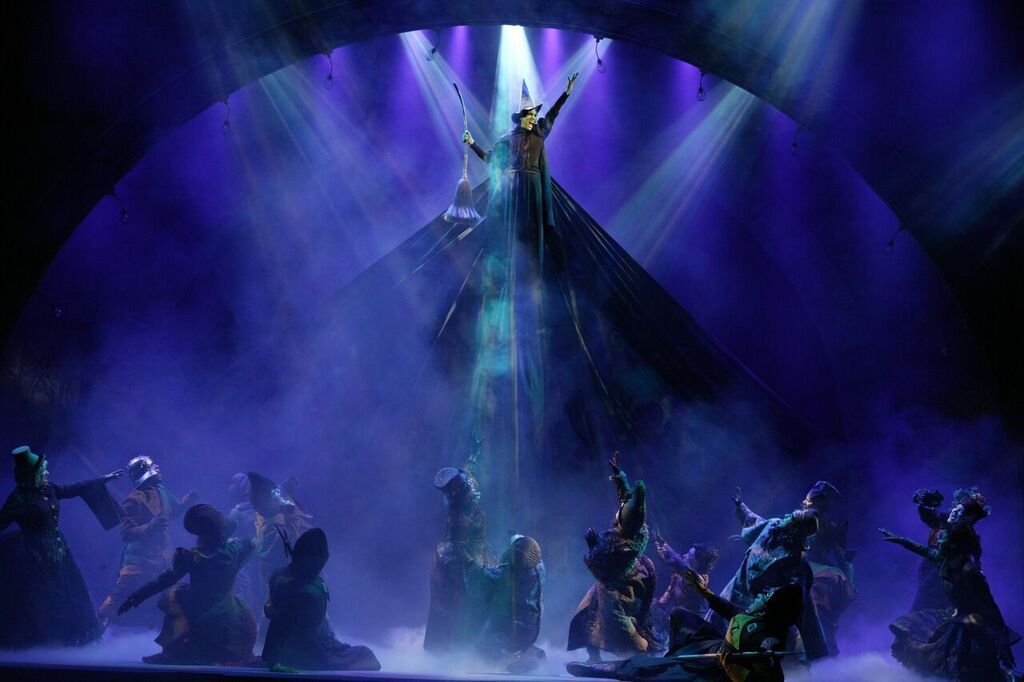 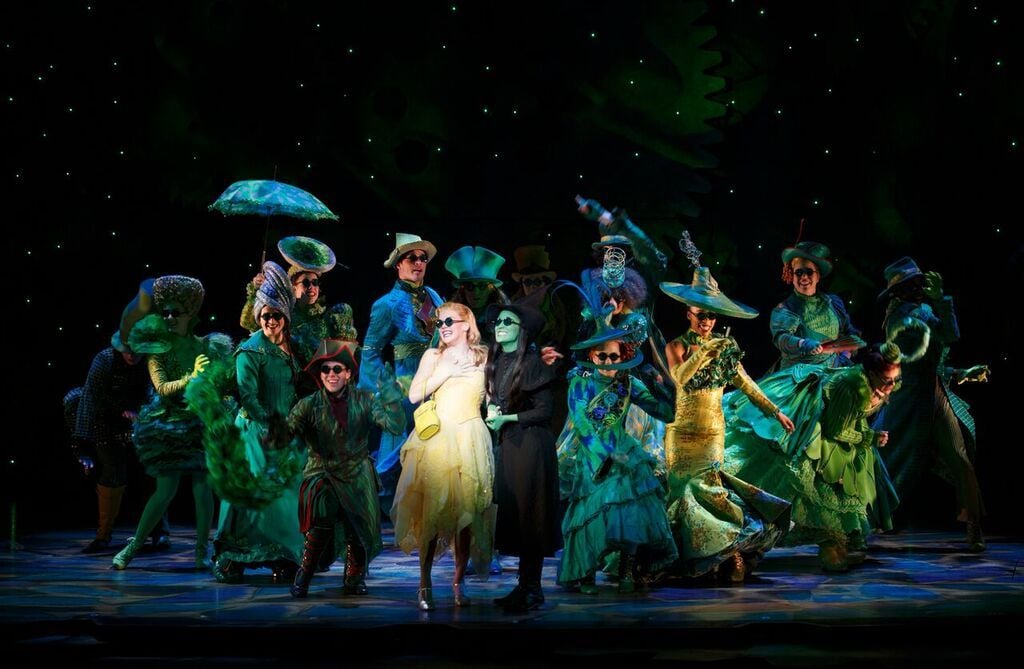 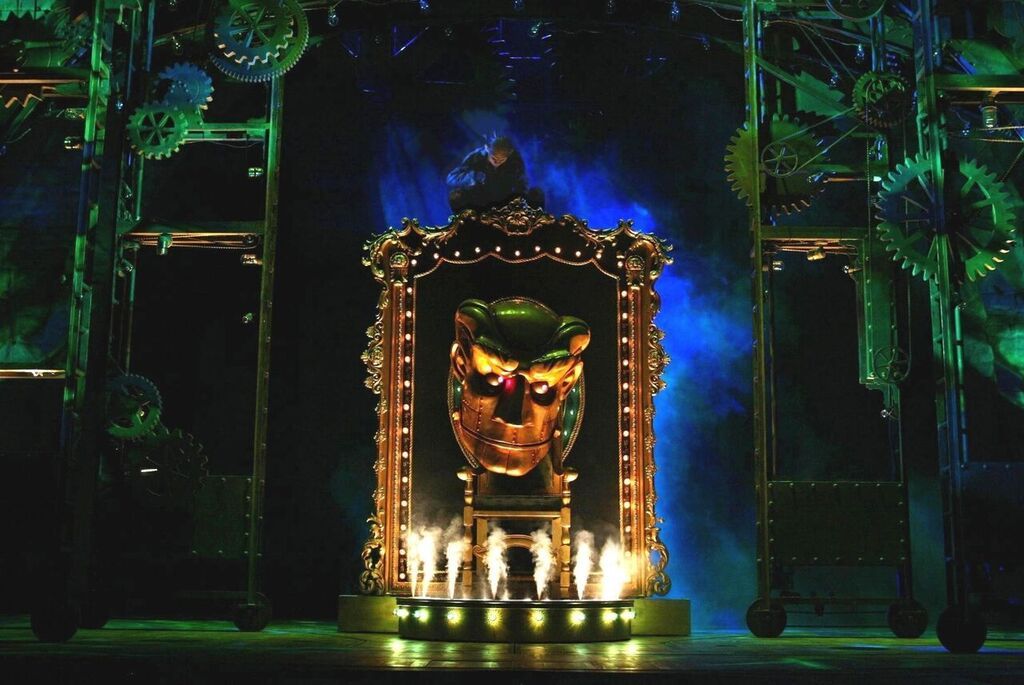 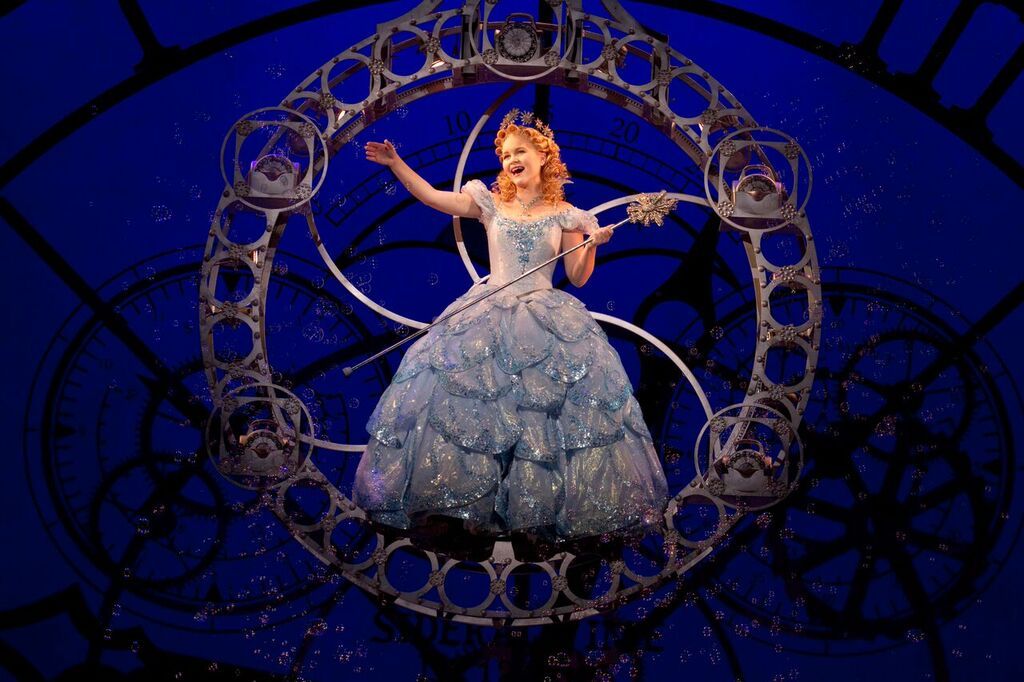 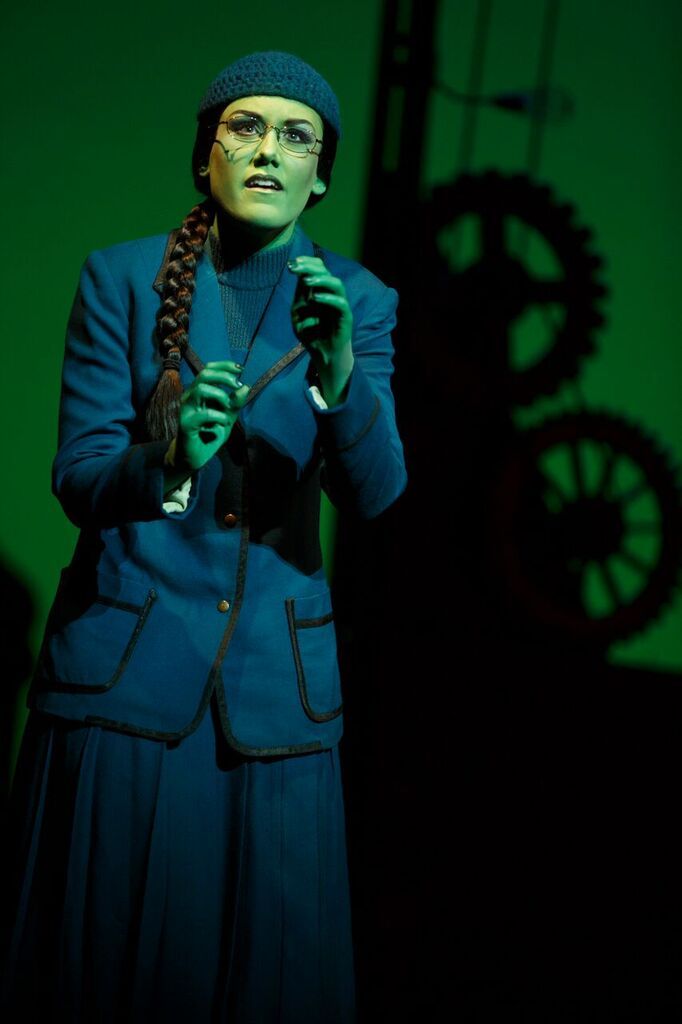 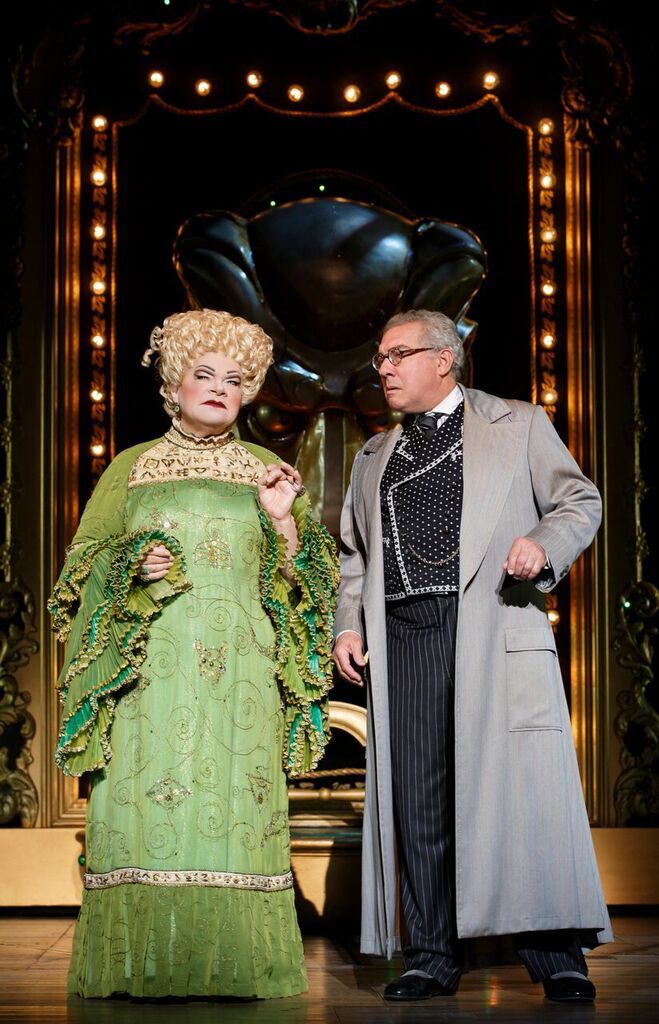 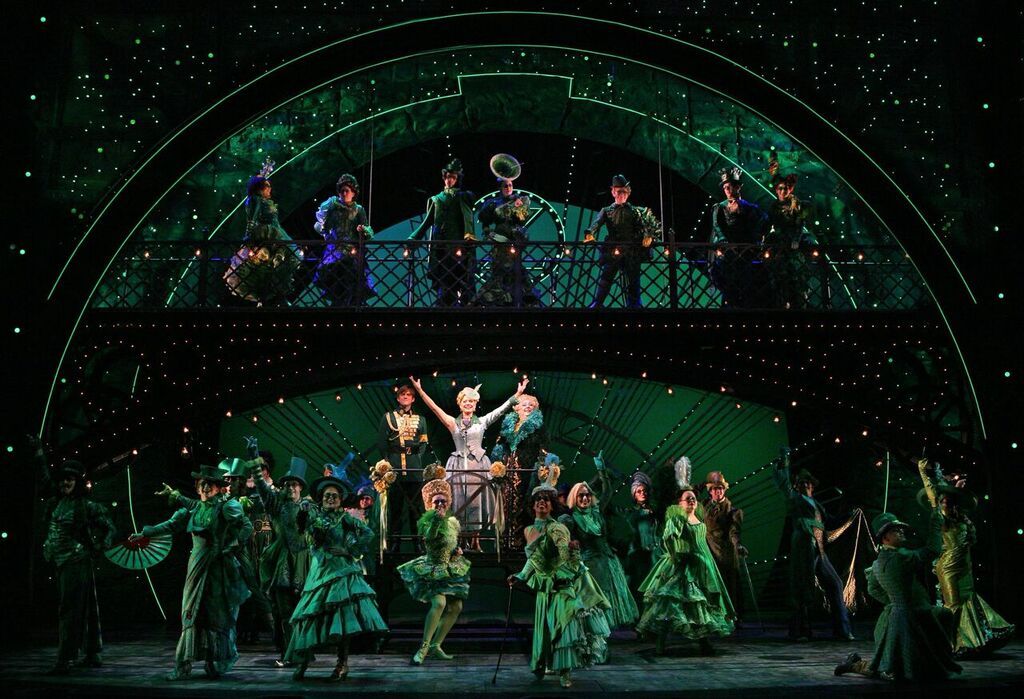 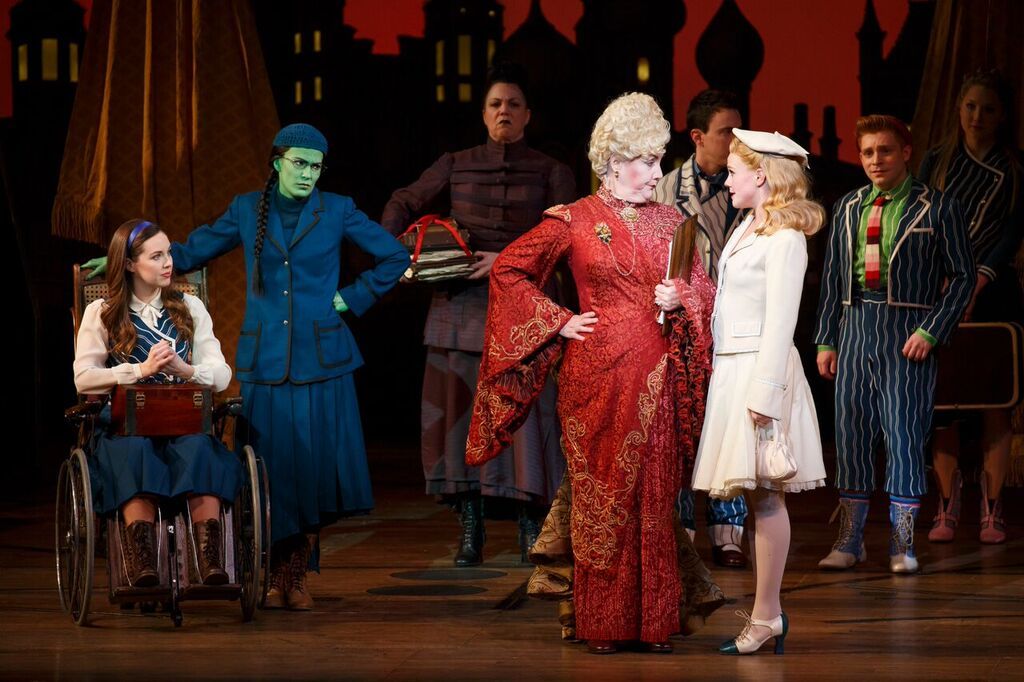 Story: Glinda, the Good Witch of Oz, appears before her subjects shortly after the Wicked Witch of the West has been killed by a bucket of water thrown on her by Dorothy, a little girl from Kansas who landed in Oz after her house was swept away by a tornado. When an Ozian asks Glinda if she knew the Wicked Witch, the crowd is surprised by Glinda’s revelation that they once were best friends.

Glinda then recounts the story of how she met Elphaba, a girl with emerald skin. Elphaba was the older daughter of the governor of Munchkinland, who doted on his younger daughter Nessarose. The latter was confined to a wheelchair caused by an extreme diet forced on her mother by her father, lest Nessarose also be born green. The unhealthy diet killed her mother and left Nessarose paralyzed.

The governor sends Nessarose to Shiz University and orders Elphaba to watch over her there. At the university, headmistress Madame Morrible learns that Elphaba has magical powers that vary from her own ability to control the weather. Elphaba is delighted when Morrible tells her she can meet the Wizard of Oz, but later is horrified to learn that the Wizard is behind the systematic imprisonment of animals that have lost their ability to speak and now are imprisoned.

Elphaba and Glinda (known as Galinda at the time), who initially are hostile toward each other, become roommates at Shiz and eventually friends as well. Unfortunately, they fall in love with the same man, the roguish prince Fiyero. Galinda in turn is loved by the Munchkin Boq, whom she persuades to court the smitten Nessarose, to everyone’s eventual unhappiness. When the court army goes after Elphaba, now known as the Wicked Witch of the West, Glinda and Fiyero join forces to save her from an unfair fate.

Highlights: Back for a fifth time at the Fox Theatre, Wicked once again is playing to packed houses after breaking box office records in its four previous engagements. Filled with impressive special effects, resplendent costuming and a vibrant musical score by Stephen Schwartz, Wicked remains every bit as satisfying to its fan base as previous editions.

Other Info: Wicked won Tony Awards in 2004 for scenic design and costume design as well as a Best Actress honor for Idina Menzel in the role of Elphaba. It features a clever script by Winnie Holzman that is based on a 1995 novel by Gregory Maguire, as well as a lush, invigorating musical score and clever lyrics by Stephen Schwartz of Pippin and Godspell fame.

On media night, understudy Mary Kate Morrissey filled in smashingly for Emily Koch in the pivotal role of Elphaba. She has the energy, voice and acting ability to show Elphaba’s inner strength and courage in the face of adversity. She captures the heroine’s vulnerability as well as her passion for social justice.

She worked well both in tandem with Amanda Jane Cooper as Galinda and Jake Boyd as Fiyero. While Cooper doesn’t seem as impressive as actresses who have portrayed the “Good Witch” in previous touring productions, she does well with the many comic moments afforded Galinda, such as when she’s teaching Elphaba how to be Popular, a comic tune that describes Galinda’s routine for impressing her legion of friends with her shallow but effective prescription for popularity.

Boyd is very good as Fiyero, bringing more substance and believability to the role than seen in previous productions. He’s less over the top in the beginning, thus making his transformation into Elphaba’s love interest all the more convincing.

The cast includes Megan Masako Haley as the embittered Nessarose, Sam Sefarian as the unhappy Boq turned vengeful Tin Man and Wendy Worthington as the ambitious and manipulative Madame Morrible. Stuart Zagnit delivers the banal evil of the sluggish Wizard, while Chad Jennings conveys the decency and decline of the goat professor, Doctor Dillamond.

Chic Silber’s special effects are highlighted by the eye-catching Act I finale, Defying Gravity, in which Elphaba soars above the fray on her flying broom. Eugene Lee’s scenic design is a wonder to behold, including some giant clocks and a fearsome dragon looming over the imposing Fox stage. Elaine McCarthy’s projections bring additional dimension to the set and Kenneth Posner’s lighting smartly accentuates the production’s multiple scenes.

Wicked has run on Broadway since 2003 and continues as well in London’s West End and touring productions in both the United States and the United Kingdom. It’s an impressive theatrical machine and one that continues to resonate in its re-imagining of L. Frank Baum’s original novel from 1900 as well as the enduring 1939 film classic.