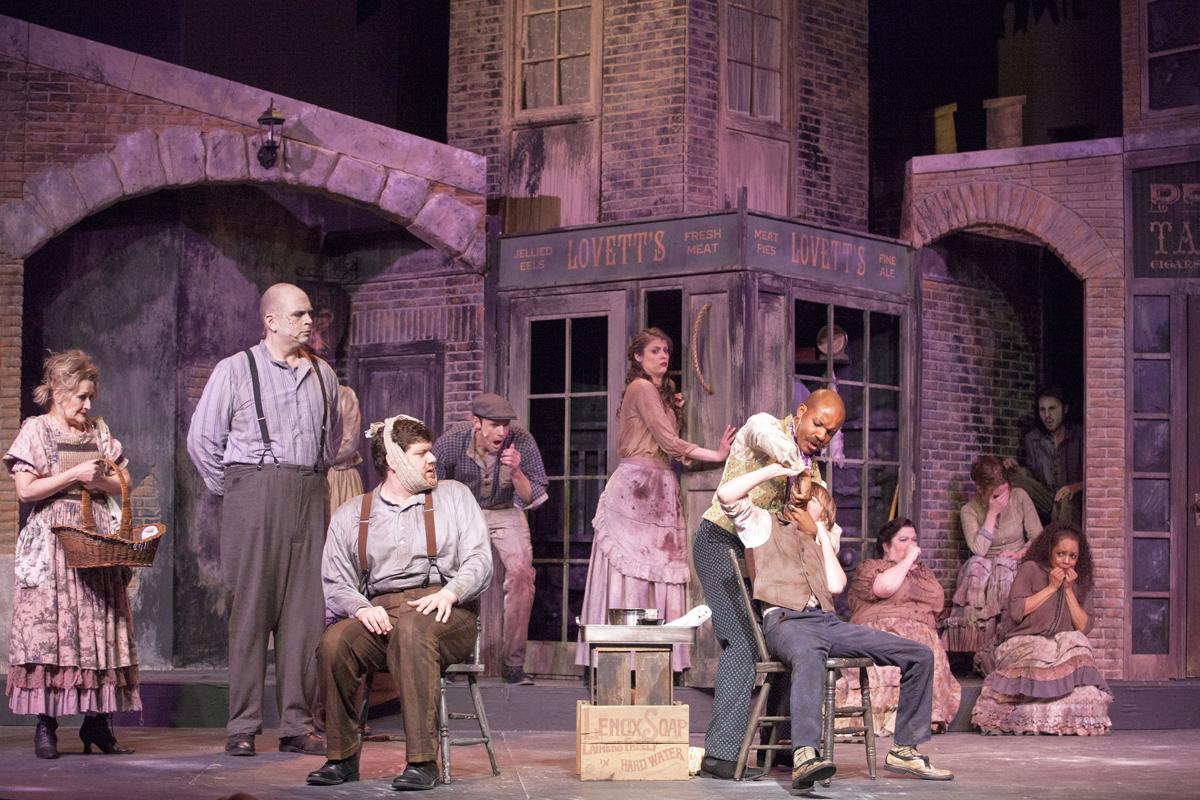 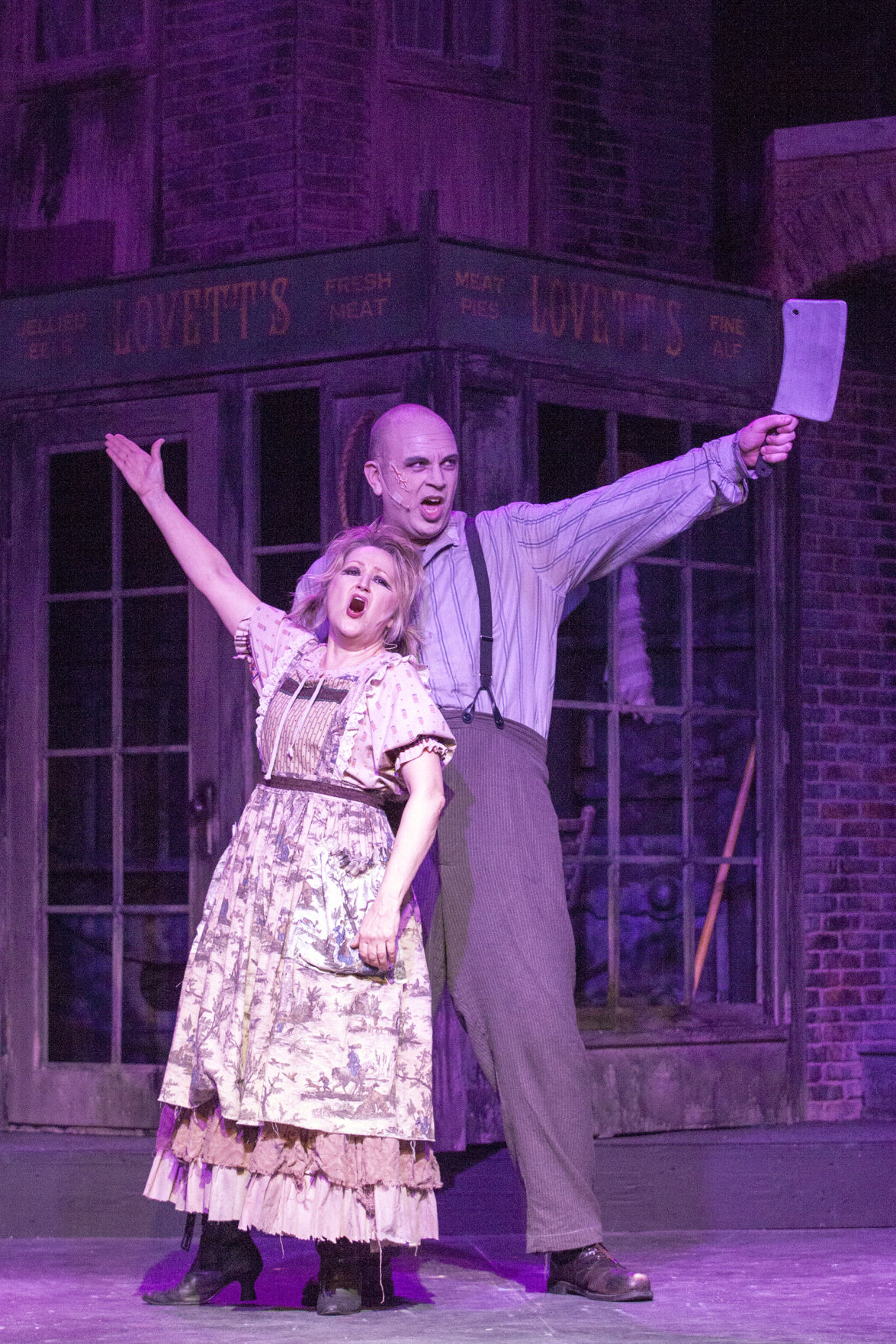 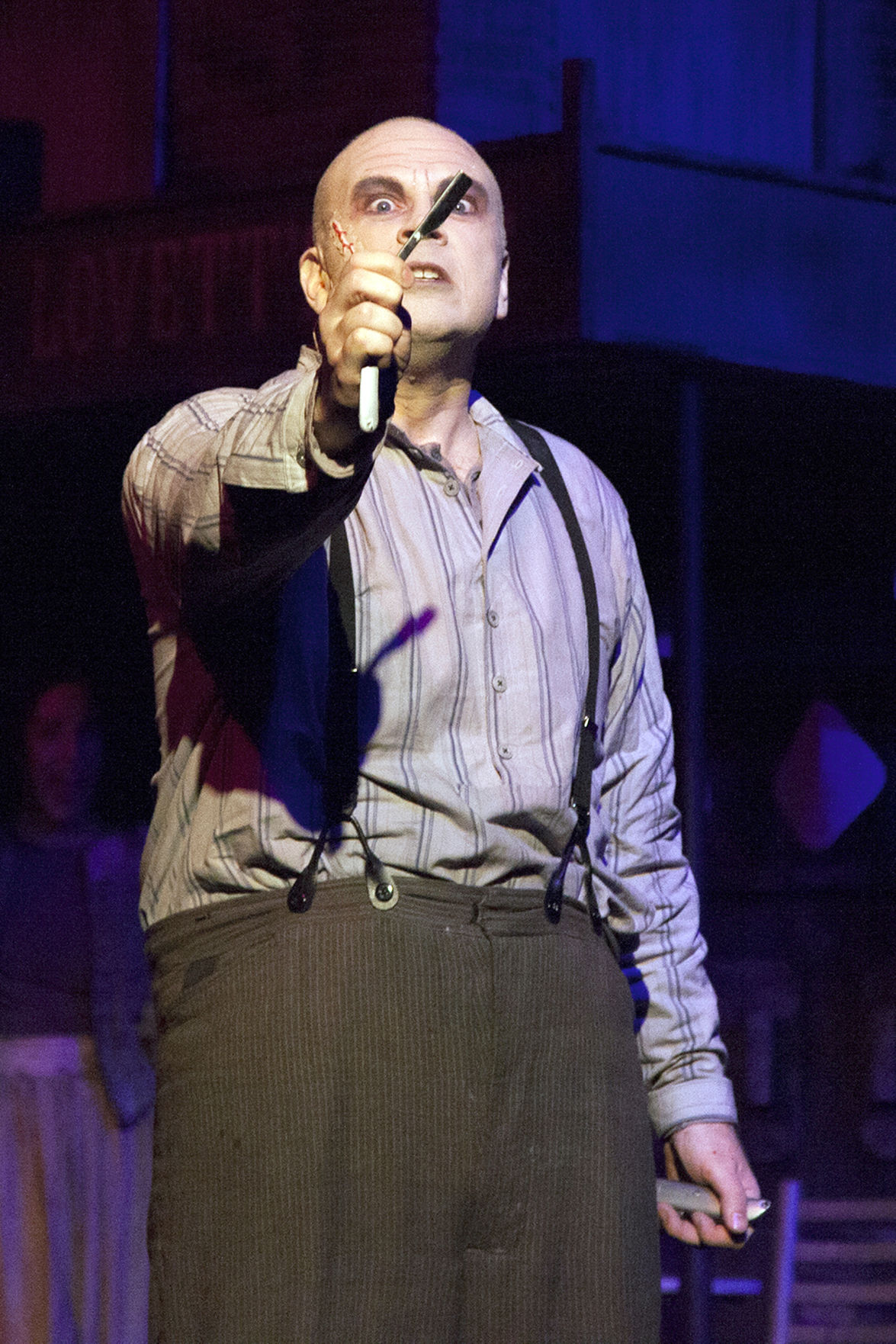 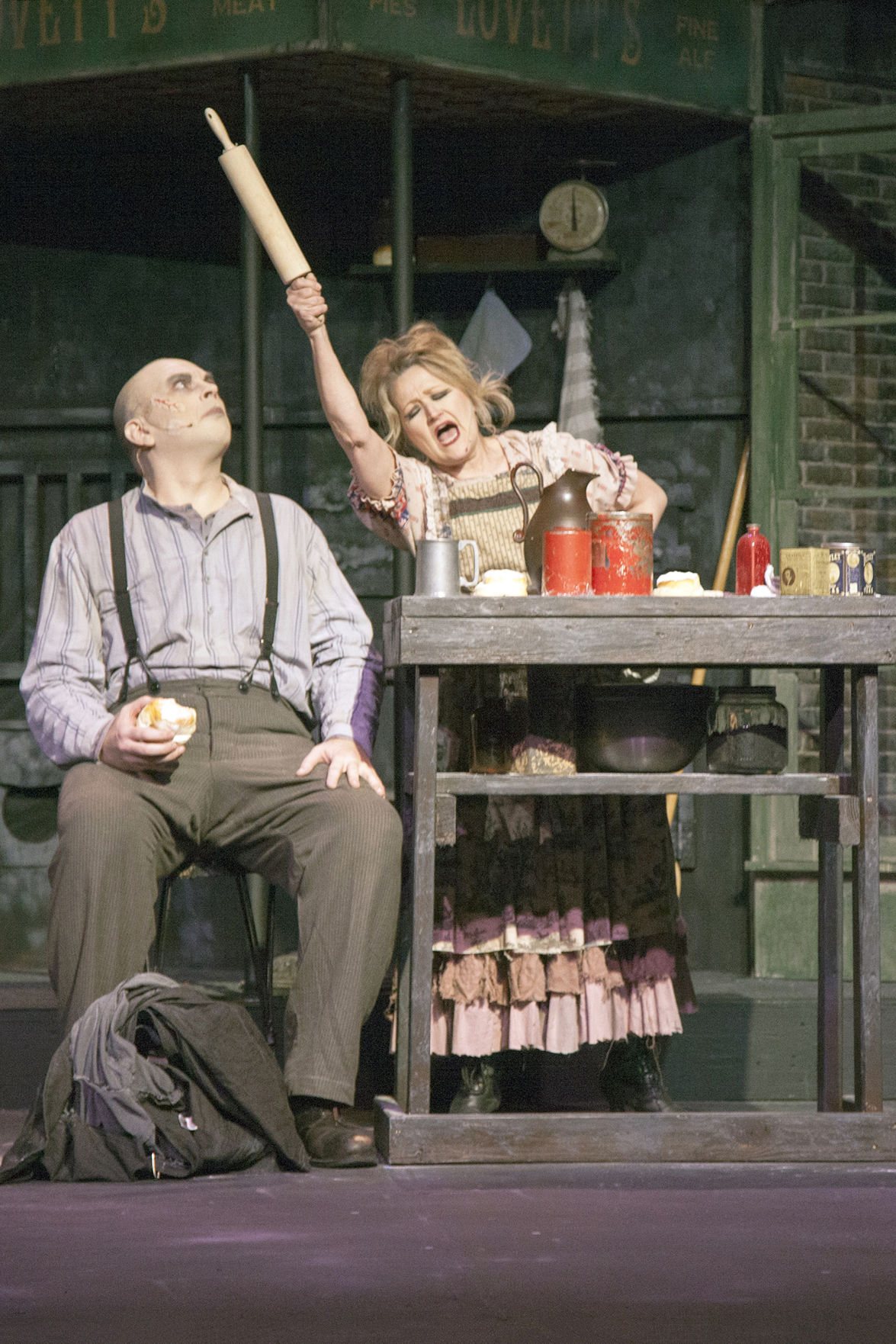 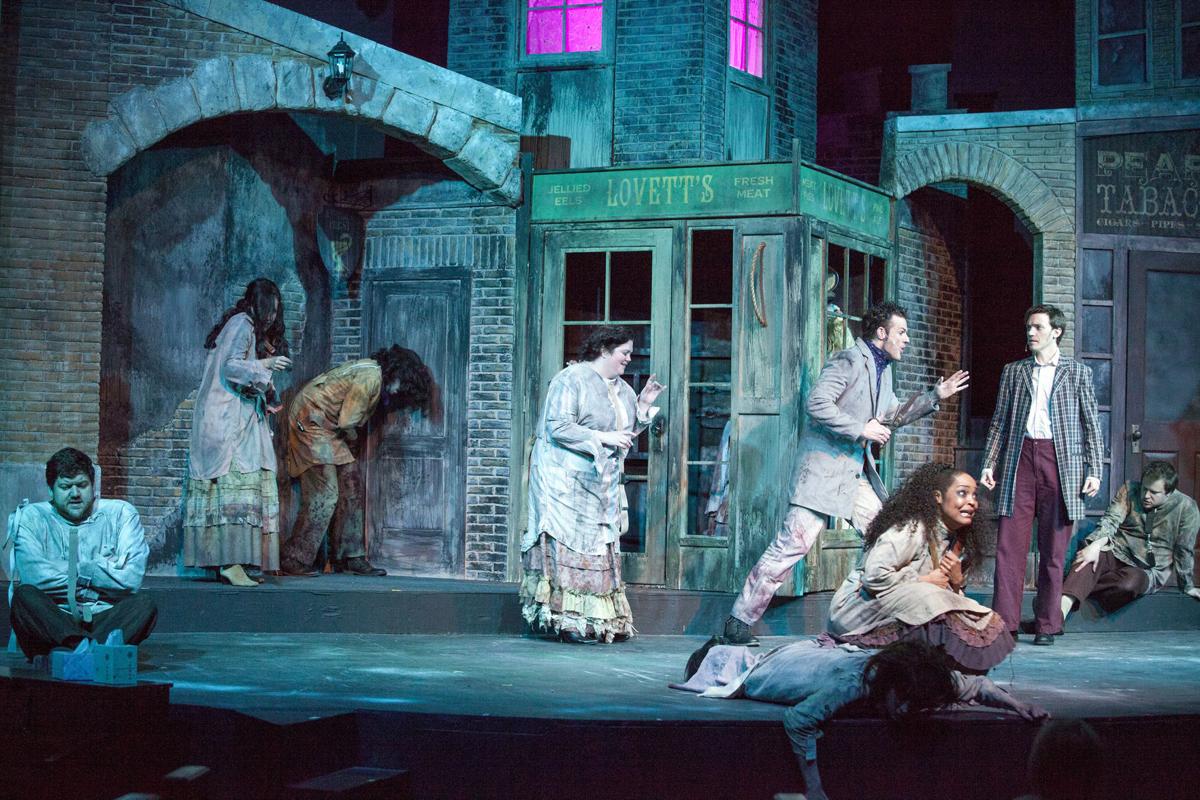 Story: Barber Benjamin Barker returns to London in 1846 after 15 years imprisonment in Australia, having been sent there on a trumped-up charge by Judge Turpin, who then raped Barker’s wife Lucy and assumed guardianship of Barker’s young daughter, Johanna. Barker arrives in London with Anthony Hope, a young sailor who saved him from drowning on the voyage home.

Seeking revenge against Turpin, Barker, now going by the name of Sweeney Todd, finds his old location above Mrs. Lovett’s meat pie shop empty and available. Recognizing him, Mrs. Lovett joins forces with the deranged Todd, helping him dispatch several bodies after he has murdered the victims.

When Anthony sees a young woman in a house while walking the streets of London, he finagles a way to meet her, and the two instantly are attracted to each other. She happens to be Johanna, who now has become the object of desire of the devious judge, who wants to marry her.

Anthony tells Todd of his plan to escape with Johanna, and Todd agrees to hide Johanna while actually hoping to be reunited with his daughter. When Tobias, a young waiter at Mrs. Lovett’s shop, learns what actually is in her meat pies, Todd and Mrs. Lovett realize that their bustling enterprise is threatened and put in motion a plan to escalate their murders. But is it all too late?

Highlights: Stray Dog Theatre hits most of the right (and difficult) notes in a gloriously realized rendition of this masterpiece of a musical written by Stephen Sondheim and Hugh Wheeler. The production is highlighted by smashing performances by Lavonne Byers as the duplicitous Mrs. Lovett and Jon Hey as the maniacal title character.

Other Info: Based on a 1973 play by Christopher Bond which in turn was inspired by the urban legend that became a ‘penny dreadful’ serial in the early 19th century, Sweeney Todd: The Demon Barber of Fleet Street garnered eight Tony Awards in 1979, including Best Musical, Best Book by Wheeler and Best Score by Sondheim. The original production starred Len Cariou as Sweeney and Angela Lansbury as Mrs. Lovett in Tony Award-winning roles.

Stray Dog’s version features vivid direction by Justin Been, who opens up the Tower Grove Abbey theater to utilize aisles through which traverse an ensemble of flamboyant players, whose ghastly makeup and shoddy costumes epitomize the grime of polluted London and the grim chances of survival for the proletariat.

Rob Lippert is responsible for the deliciously decayed scenic design, a mass of gray, washed-out buildings that bespeak the poverty of the surroundings. It’s expertly enhanced by Tyler Duenow’s insightful lighting, especially haunting in Sweeney’s barber shop on the set’s second level.

The cast also had some moments of daunting challenges grappling with Sondheim’s difficult tempos and perplexing ranges, but for the most part they are equal to the task and then some. Most impressive is Cole Gutmann’s soaring tenor as the show’s heroic figure, the aptly named Anthony Hope. His pairing with Eileen Engel’s accomplished soprano as Johanna on the upbeat ballad, Kiss Me, is a highlight of the production.

Kay Love utilizes her beautiful voice to bring unsettling power and persuasion to the role of the mysterious Beggar Woman, adding some devilishly decadent moments when not singing as well. Her husband, Gerry Love, shows command in the role of the lecherous, insidious Judge Turpin, while Mike Wells demonstrates the breadth of his singing strength in the role of Turpin’s toady, Beadle Bramford.

Connor Johnson delights as the enterprising young Tobias, while Tyler Cheatem goes too far over the edge in the understandably inflated role of the boastful “Italian” barber, Pirelli, but does showcase a fine voice.

Byers survived a rough start on the tune, Worst Pies in London, and then settled in nicely, both musically and in splendid comic form as the opportunistic Mrs. Lovett. Her expert timing and deadpan reactions make this Mrs. Lovett a wacky and weird wannabe love interest for the indifferent Sweeney, grandly mining the show’s surprising elements of humor.

As the title character, Hey impressively displays not only a sturdy, steady voice in his lower register but also captures the menace, mayhem and madness in the “demon barber” who, like Captain Ahab, is driven solely by revenge and ultimately pays the consequences for his single-minded focus. He teams with Byers charmingly on the gruesome albeit humorous Act I finale, A Little Priest, which describes the show’s grisliest theme.

Artistic director Gary Bell announced on opening night that the first two weeks of Sweeney Todd are entirely sold out. Make plans quickly to obtain ducats for the production’s third and final week. It’s a close shave, but hopefully you’ll score seats for this grand and glorious presentation.