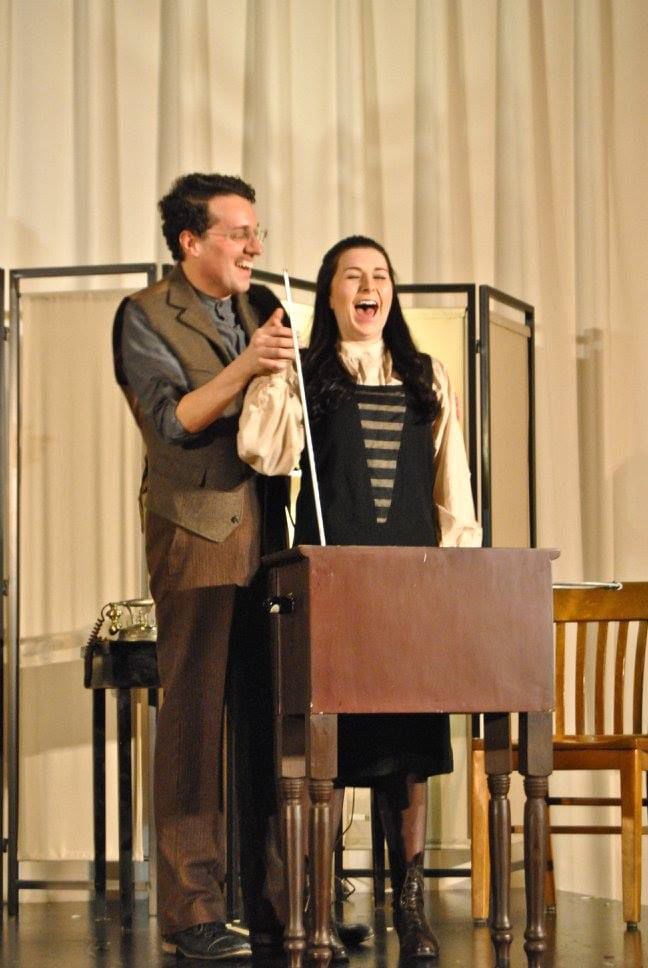 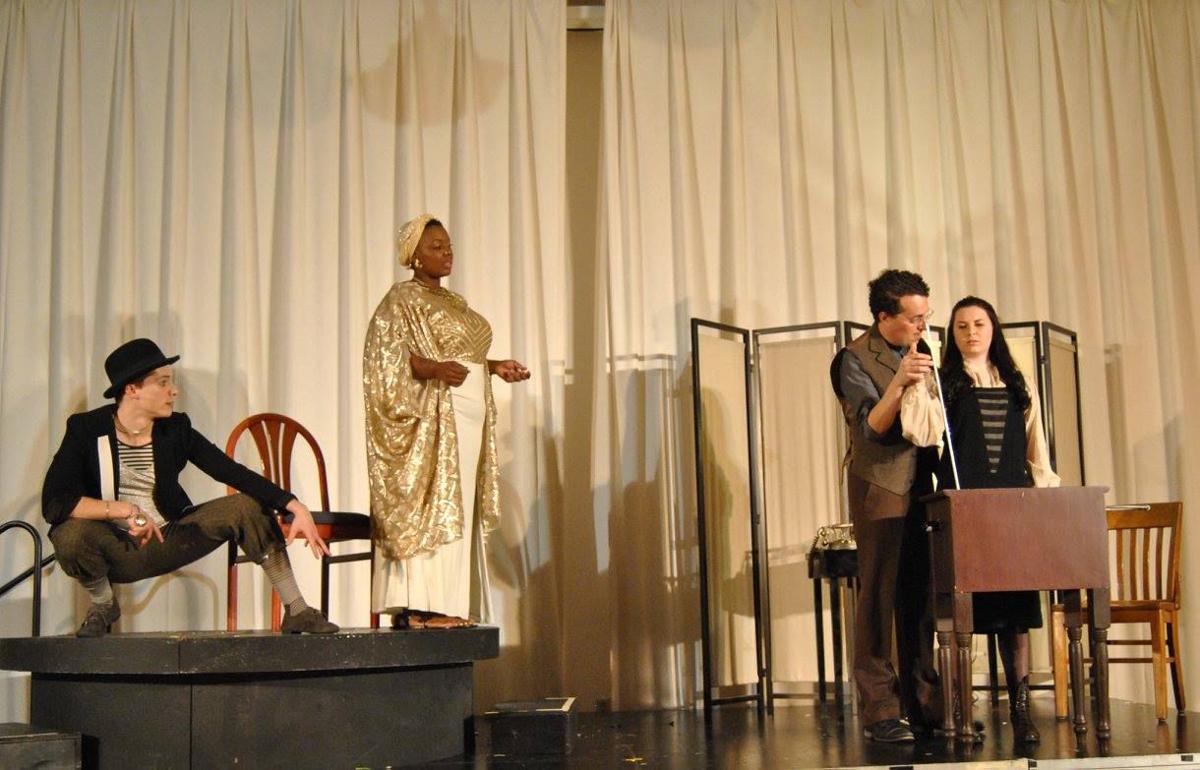 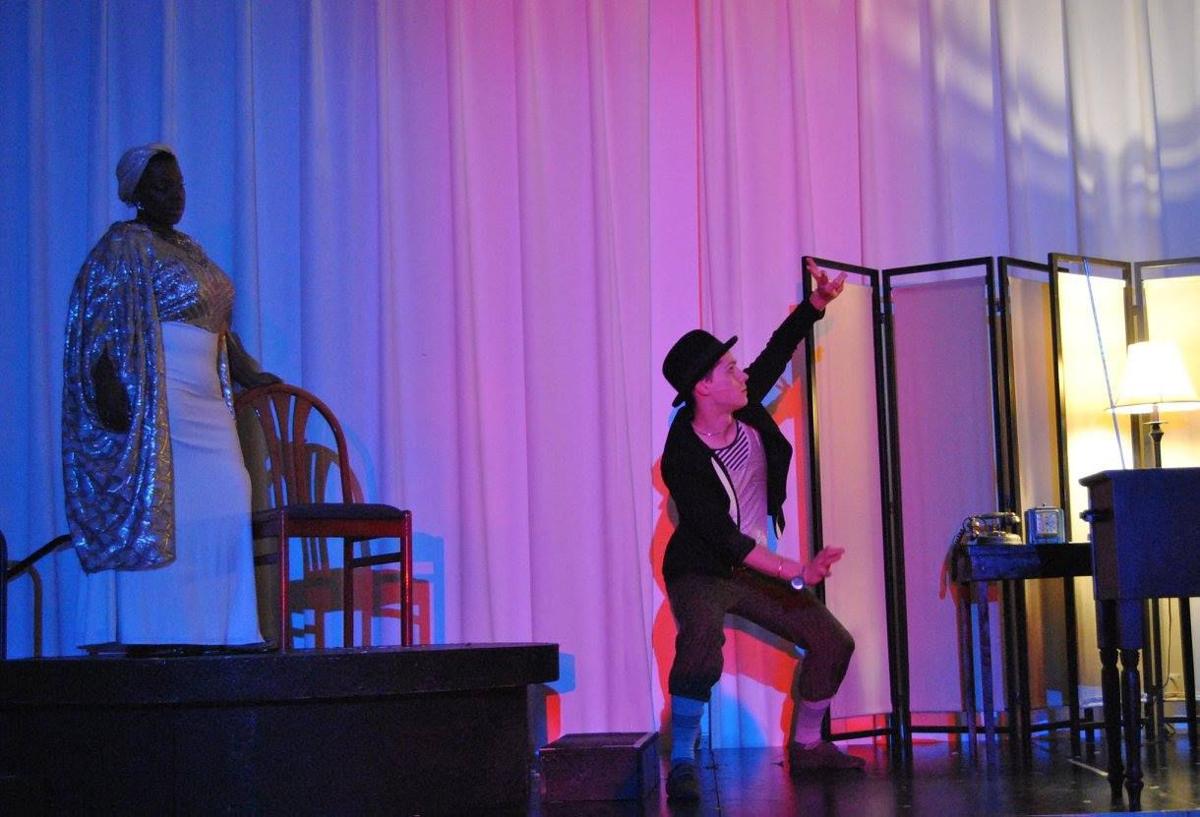 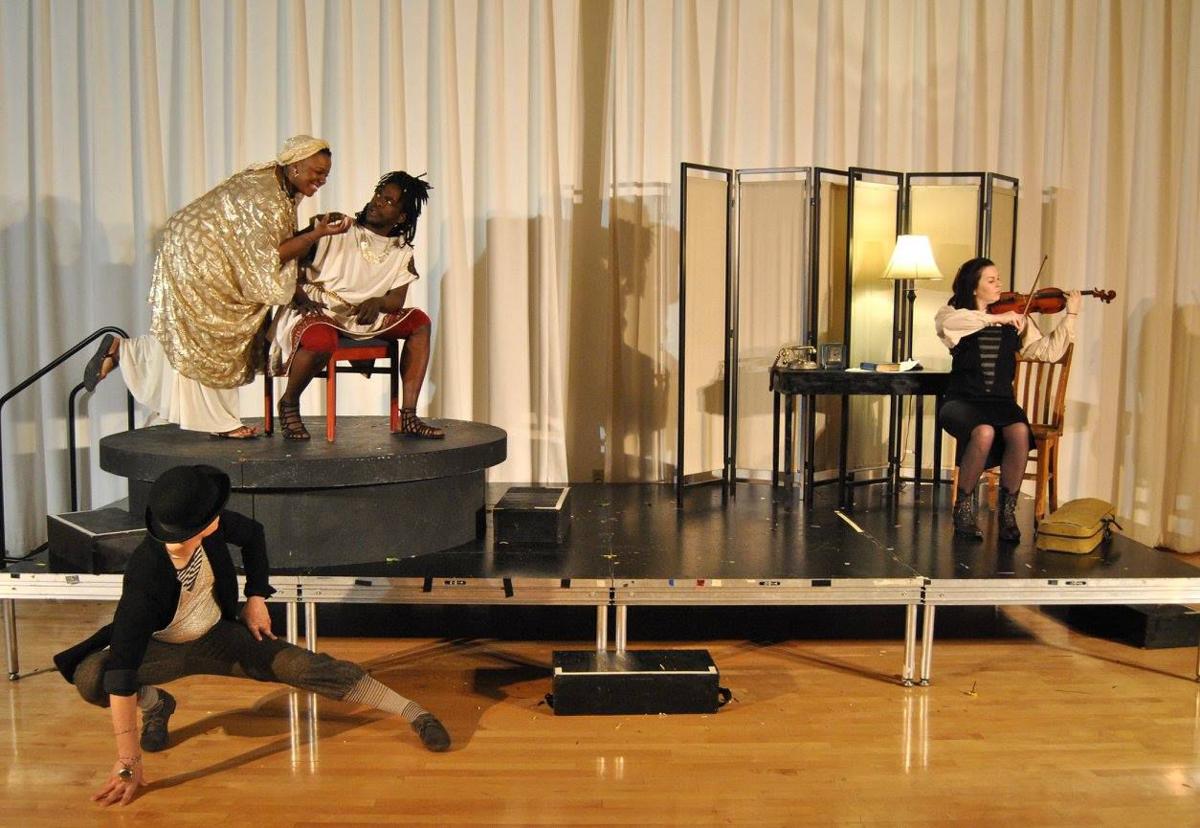 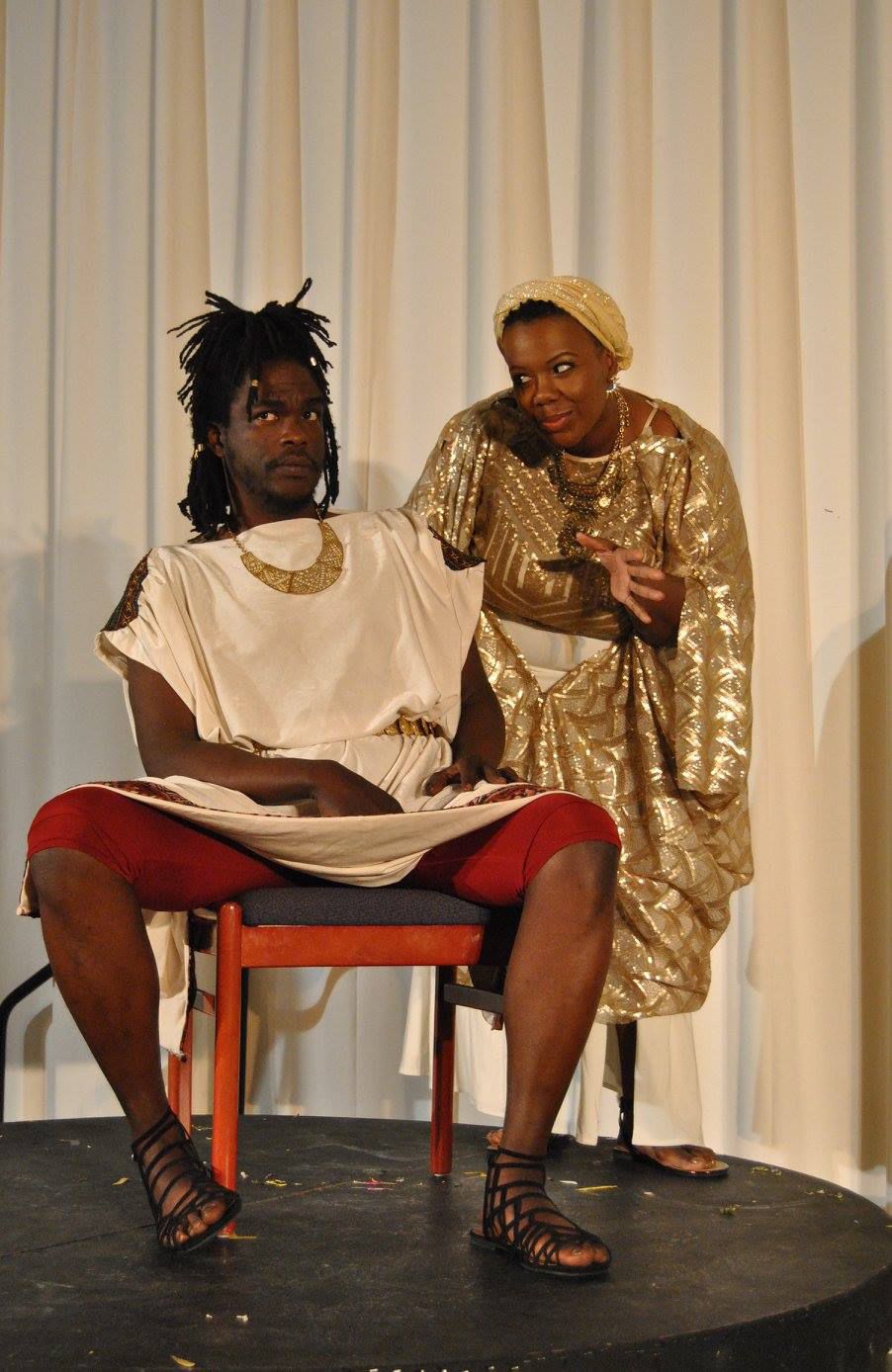 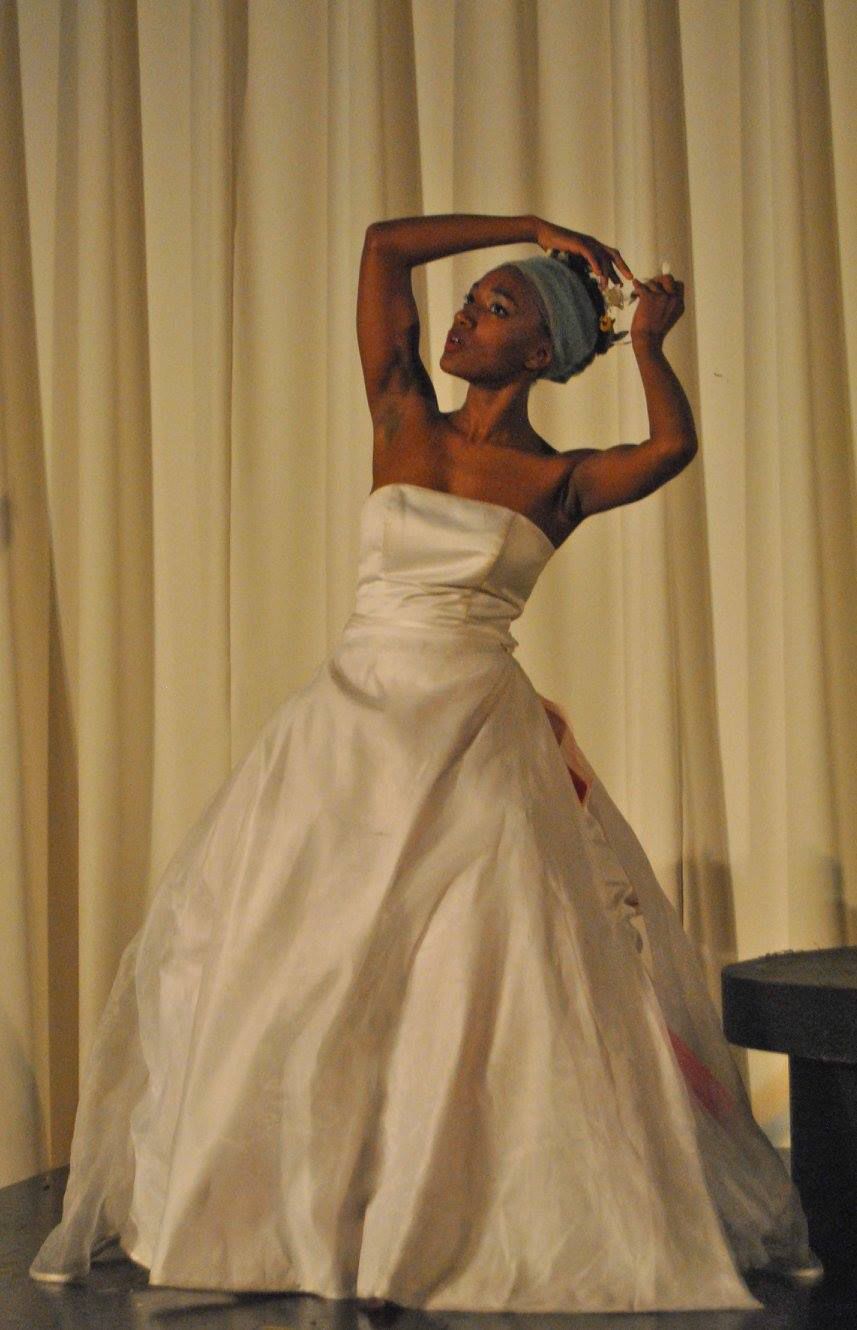 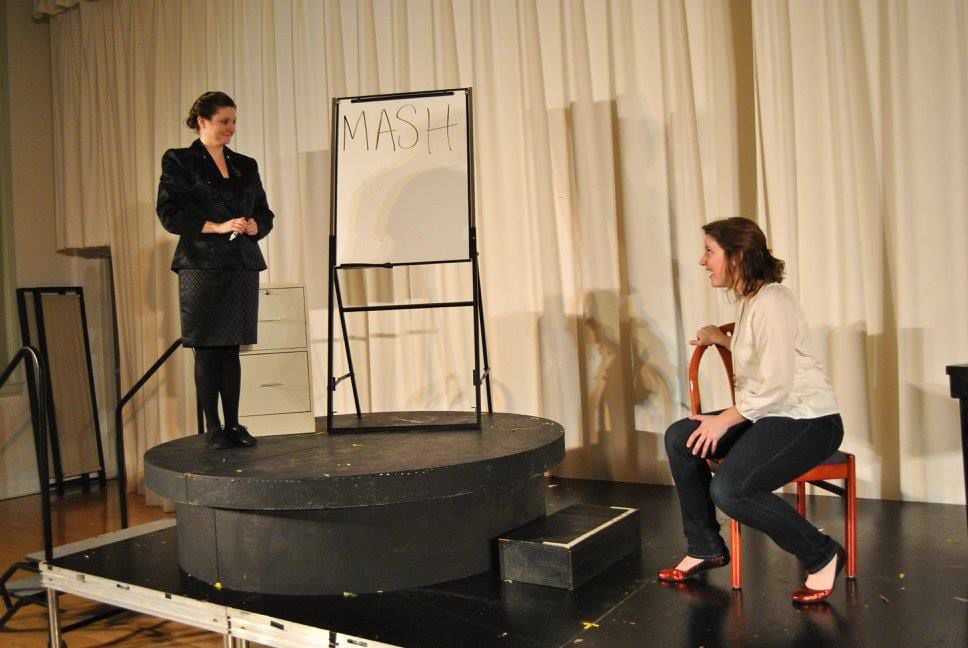 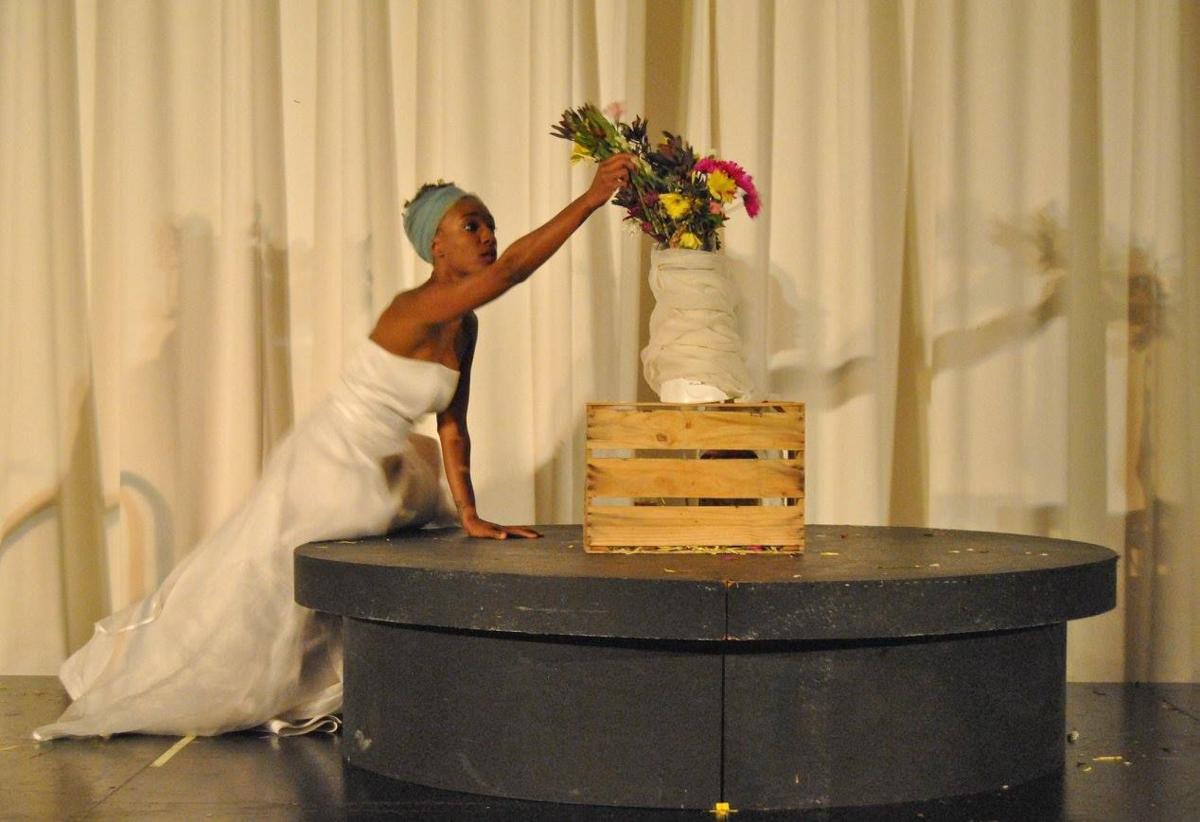 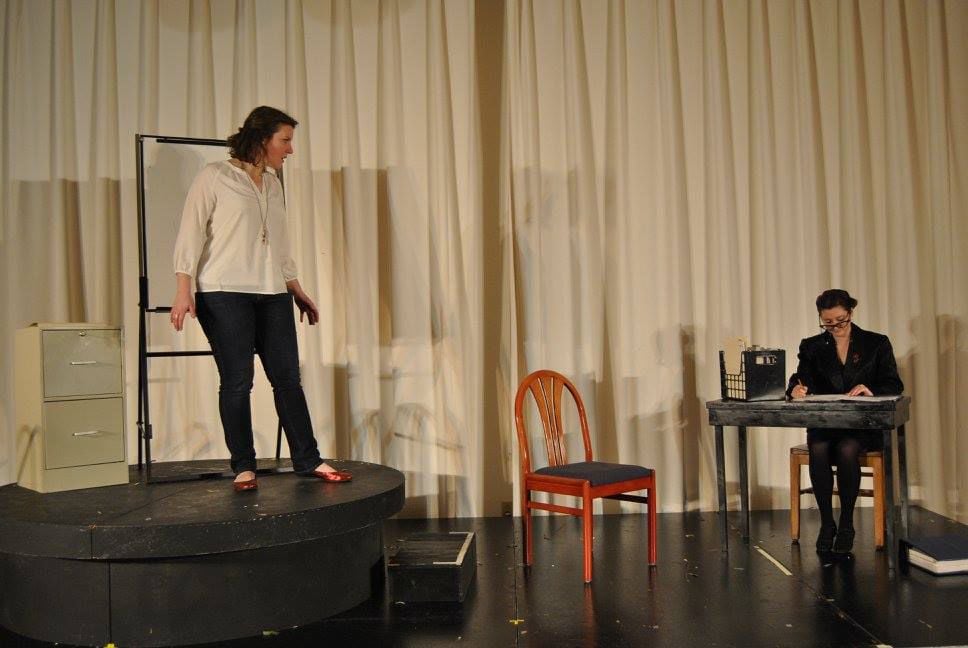 Other Info: The Aphra Behn festival is named for the British spy, playwright, poet, translator and fiction writer from the Restoration era. As one of the first English women to earn her living by writing, Behn broke cultural barriers and serves as a literary role model for later generations. SATE presented a play titled Or in 2015 that focuses on the life of Aphra Behn.

The three works in the showcase each had comic elements, albeit depicted in very different ways. Roberts’ effort, Deflowered, uses the Book of Corinthians in the New Testament, according to program notes, “as the foreground for her abstract interpretation of the loss of one’s virginity and the discovery of love…The piece contains a ‘choose your own adventure’ ending that mirrors the different experiences of love, which begs for more than one viewing.”

Perhaps. Roberts’ mute presentation was well received by most in the audience, and included several clever touches, such as a ‘floral’ wedding gown courtesy of Elizabeth Henning’s whimsical costume design and a blender used by Flowers’ character to immerse herself in the experience. For me, though, it was performance art that is in the eye of another beholder. Sophie Powell directed this brief excursion into humor.

In Alyssa Ward’s Life Ever After, a young woman is confused and surprised to find herself being interrogated by some nameless bureaucrat. Poor Liz actually committed suicide and now is being questioned by Agnes, who has been toiling away in purgatory for several hundred years as a welcoming clerk of sorts.

This initial scene is reminiscent of scenes from Beetlejuice, but here Ward veers off into another humorous area: Liz can return to Earth in a new body, oblivious to her past, although a memory may pop up in a dream or such. Given that scenario, she returns for another go at life.

Nicole Angeli filled Liz with equal doses of confusion and melancholy but also with a renewed sense of hope. Her character was helped immeasurably by the amiable Agnes, who was played amusingly by Elizabeth Van Pelt, especially in a scene where Agnes diagrams Liz’s potential next moves. Kate McAllister directed the entertaining piece in breezy, engaging fashion.

Best of the three works was Shualee Cook’s The Music of the Goddess. In it, Apollo, the god of music, engages in good-natured debate with Electra, in Greek mythology the daughter of King Agamemnon and Queen Clytemnestra.

They observe from afar the plight of Clara Reisenberg, a child violinist prodigy from Russia in the early 20th century who later immigrated to America with her family. When Clara develops tendinitis she is forced to give up her career, thwarting her considerable musical talent. Enter Glitch, a fairy-like creature who magically introduces Clara to Leon Theremin, a Russian inventor who patented a device called a theremin in 1928.

It’s an electronic musical instrument that features two metal antennae which can be controlled by a musician’s hands via oscillators without actually being touched, with one hand shaping the instrument’s frequency and the other its volume. The adult Clara Reisenberg Rockmore became proficient at mastering the instrument’s potential.

Cook’s story is fascinating and well worth stretching into a full-length play. It’s a humorous, compelling and intoxicating blend of history and fantasy, incorporating mythological figures and historic individuals into its intriguing tale.

Kristin Rion directed the piece with a flair to match the script, utilizing the Centene floor for the arrival of the puckish Glitch (a musical term of its own), with a ‘heavenly’ realm for the gods at stage right and a cozy performing area for the musicians at stage left.

The piece featured impressive work by Lex Ronan as the gifted Clara; John Wolbers as the futuristic, innovative musician and inventor Theremin; Michael Pierce as the acrobatic, magical Glitch; Carolyn Sealy as the wise and understanding Electra; and Chris Ware as the good-natured, laid-back Apollo.

Ben Lewis’ lighting design was especially effective on the Goddess piece, which also featured clever props courtesy of Rachel Tibbetts and Ellie Schwetye. Pamela Reckamp served as dialect coach. Sophie Powell and Griffin Trapp provided the pulsating sound design for Deflowered, while Sean Binkley and Rion added the beguiling sound design for The Music of the Goddess. McAllister furnished the appealing sound design for Life Ever After, which may have included tunes by Paul Simon.

Venue: Centene Center for the Arts