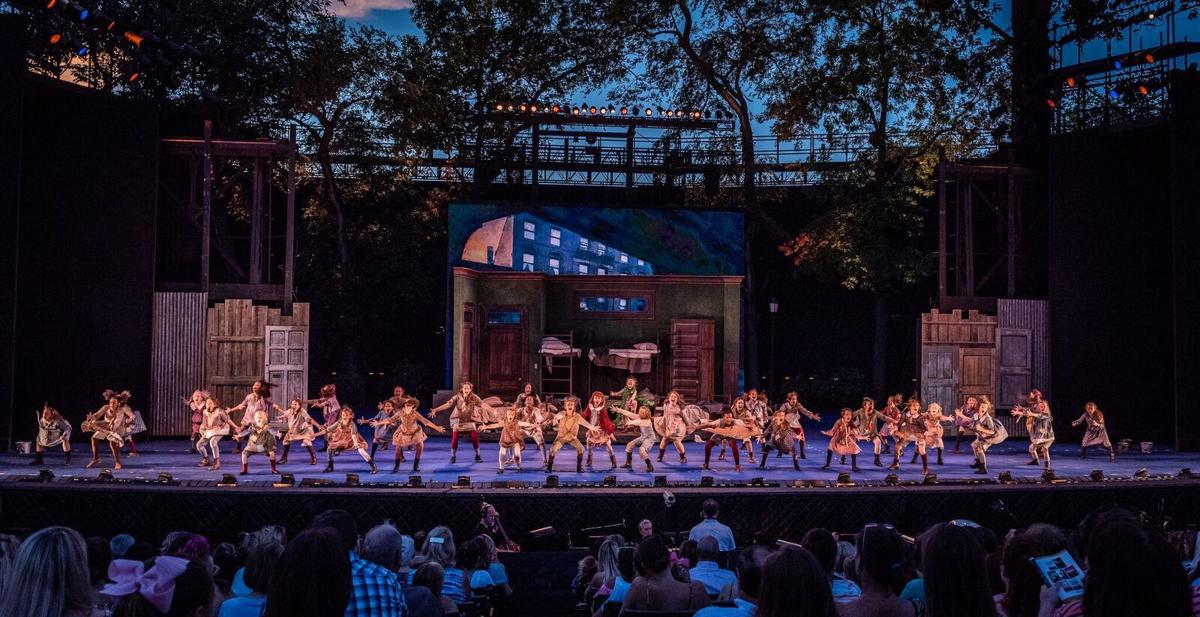 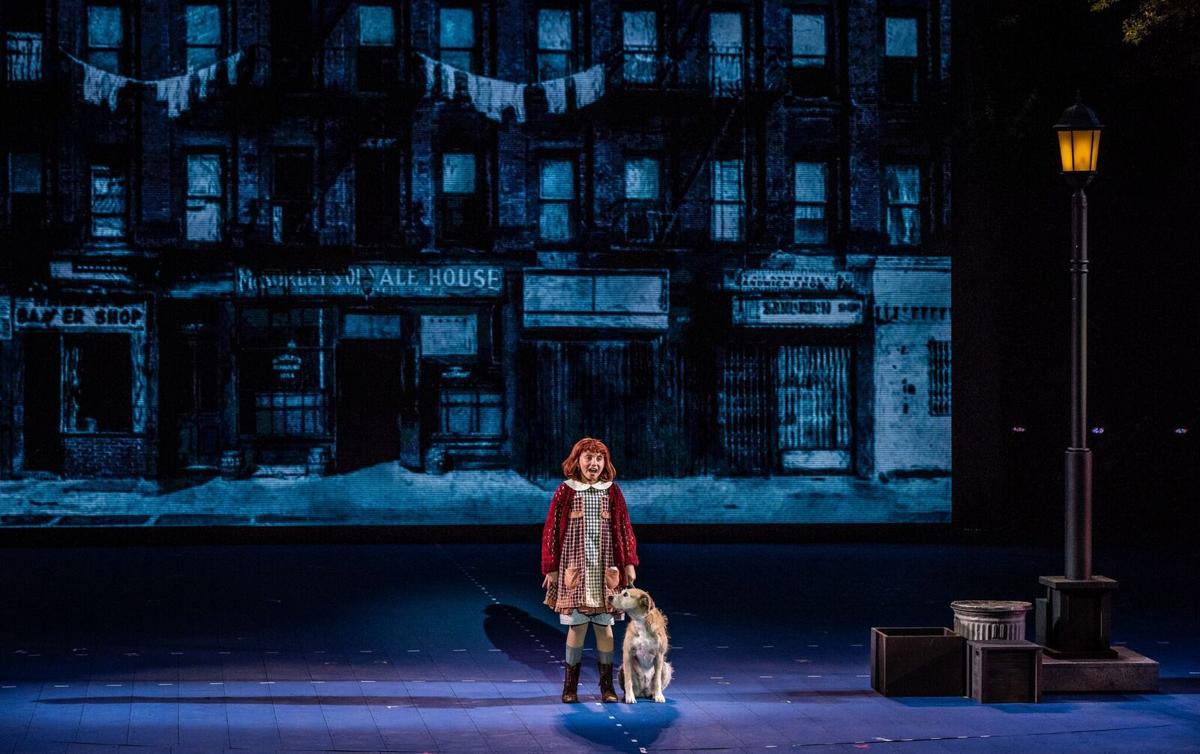 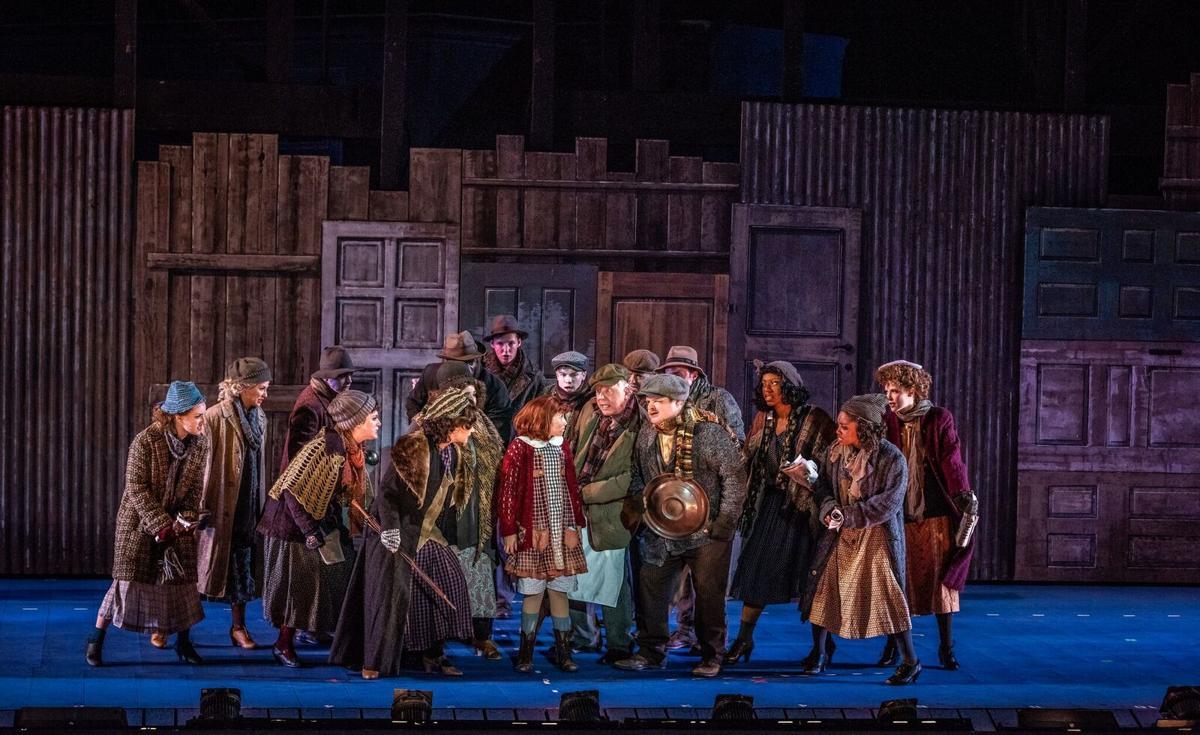 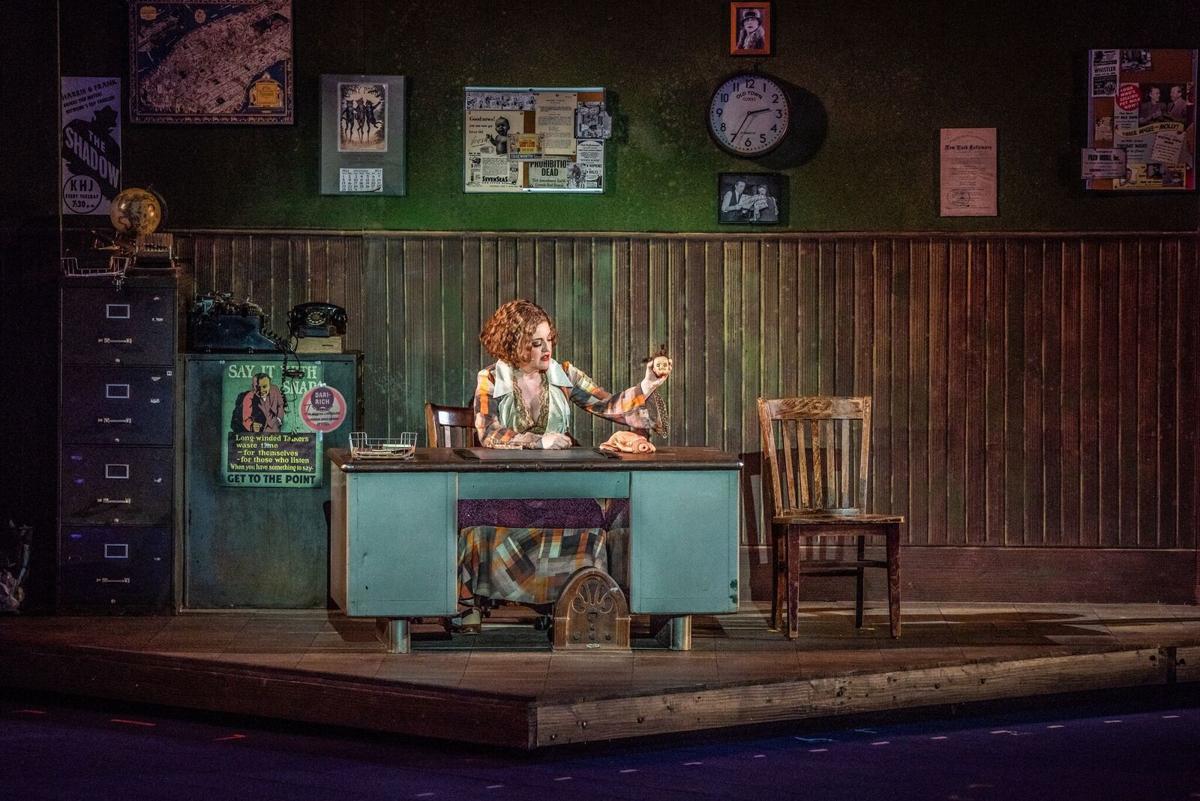 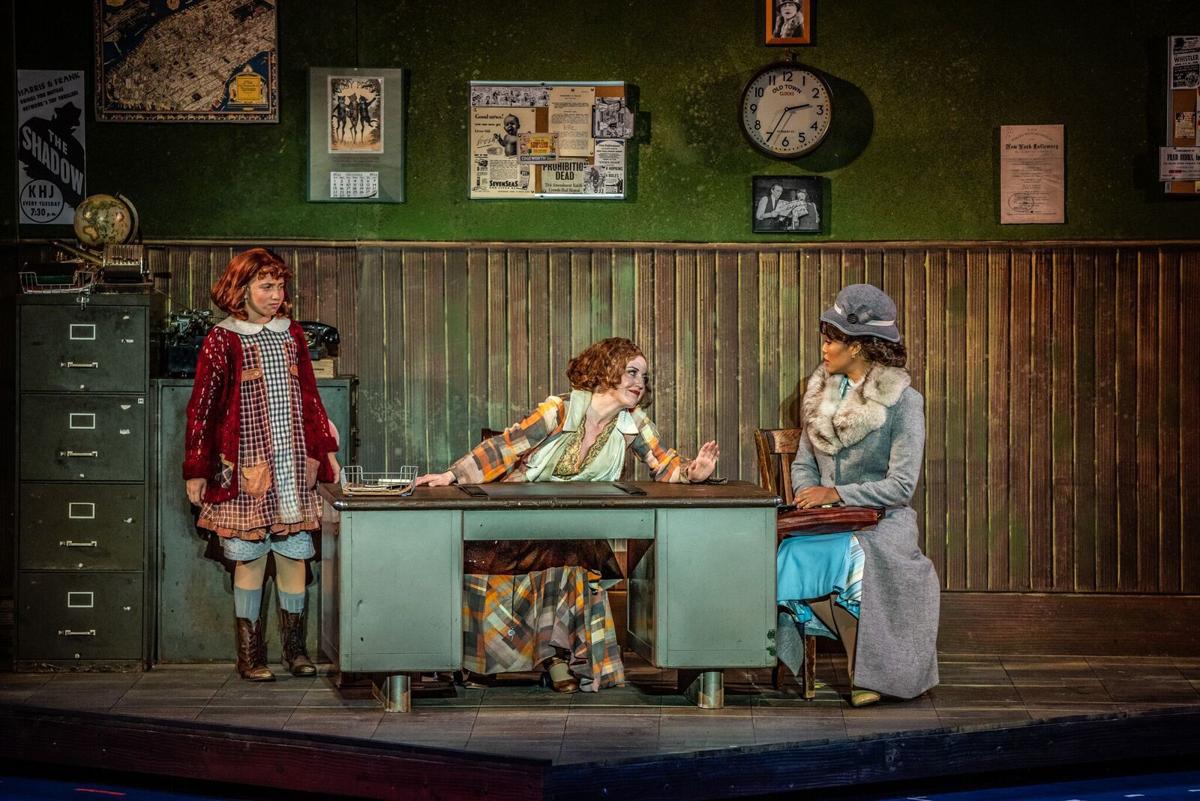 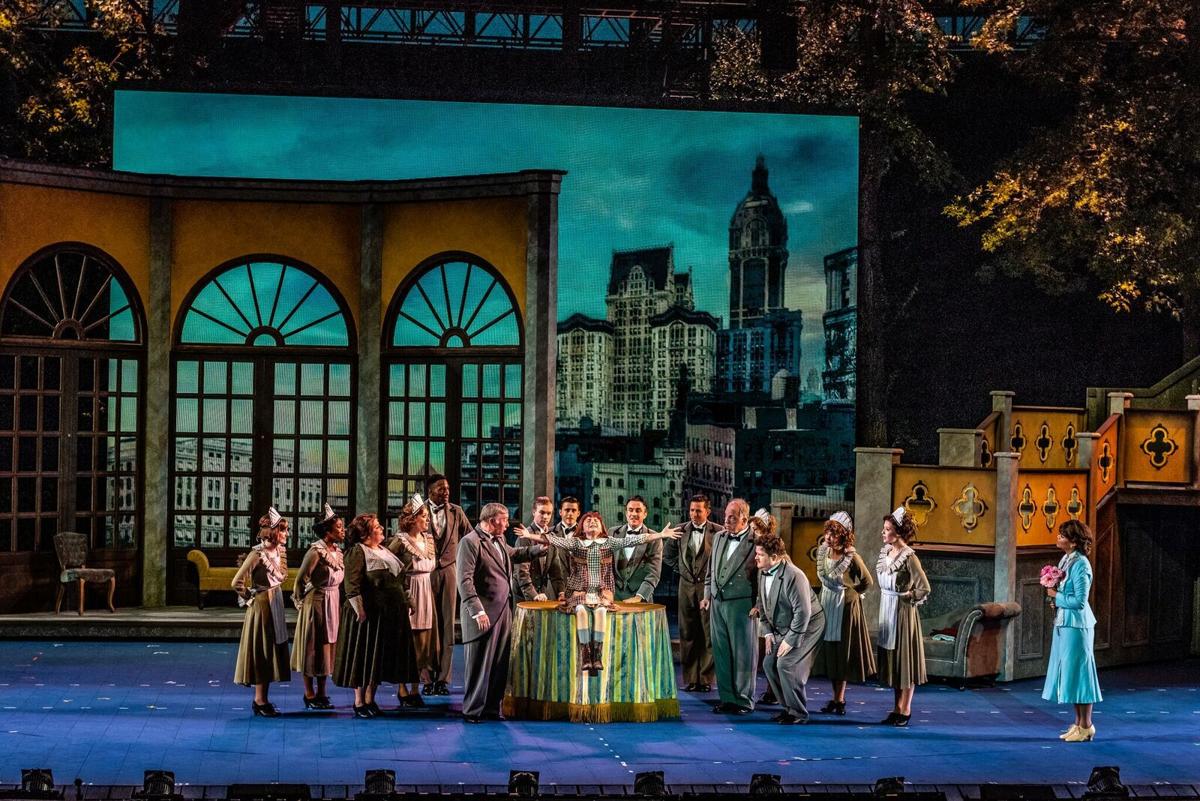 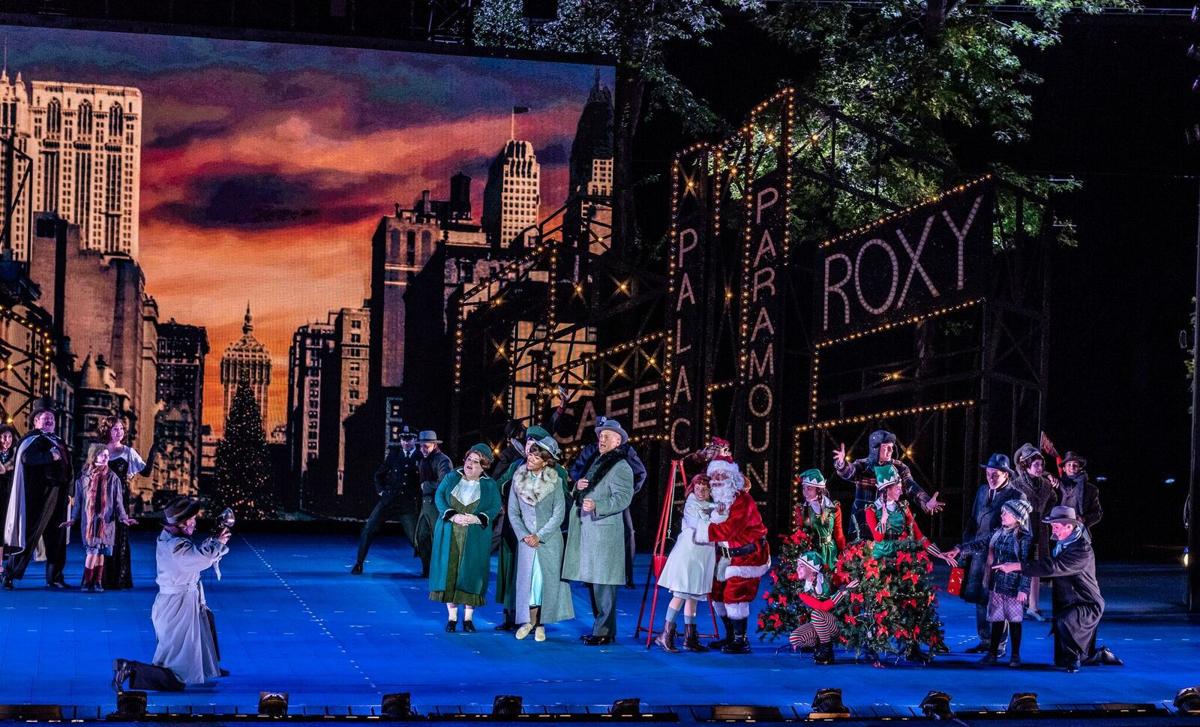 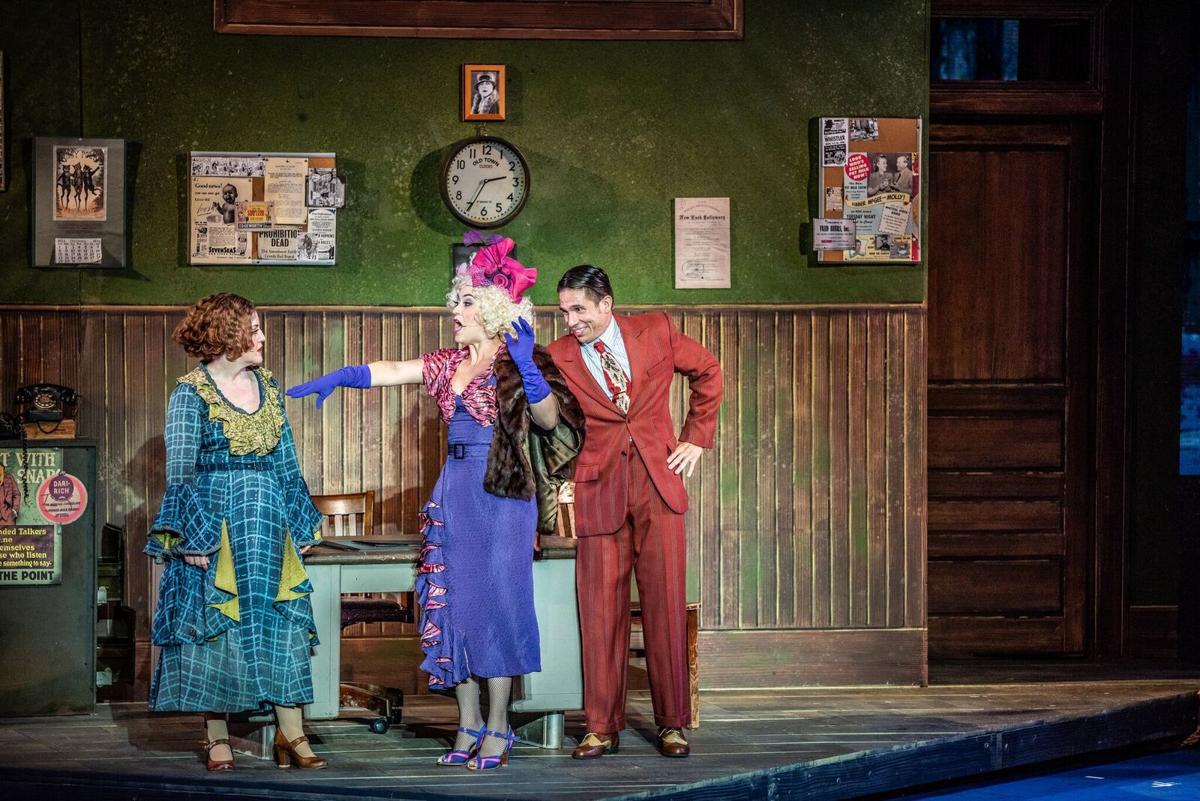 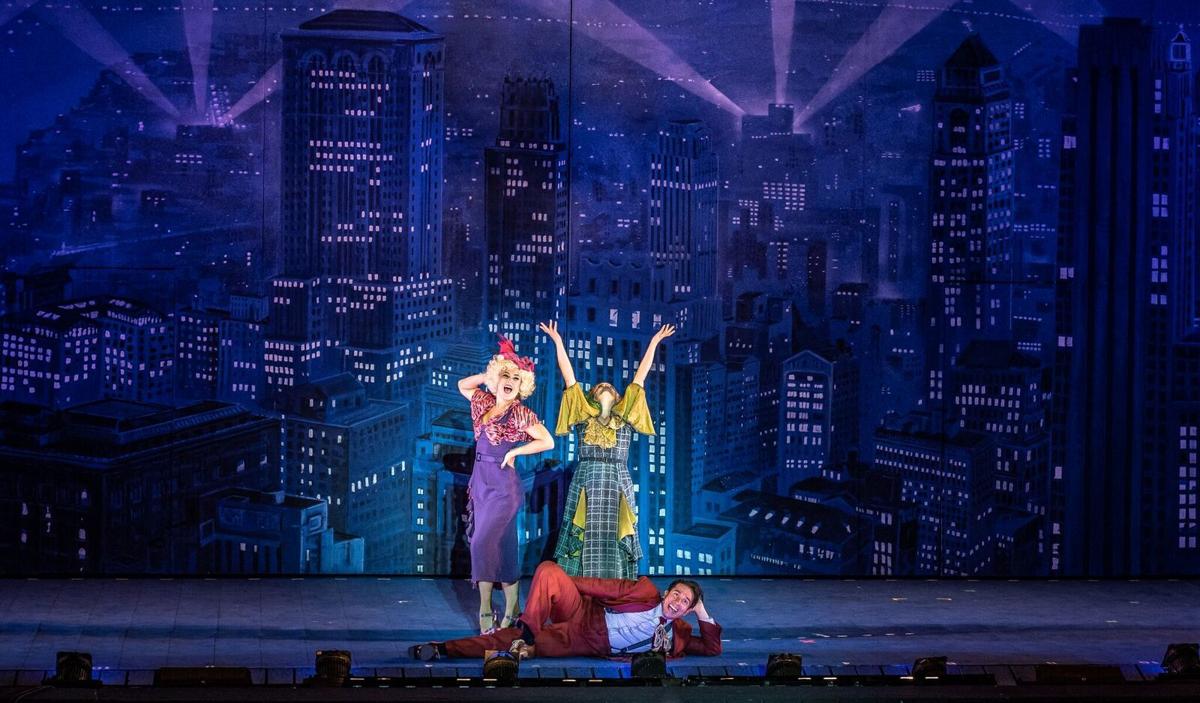 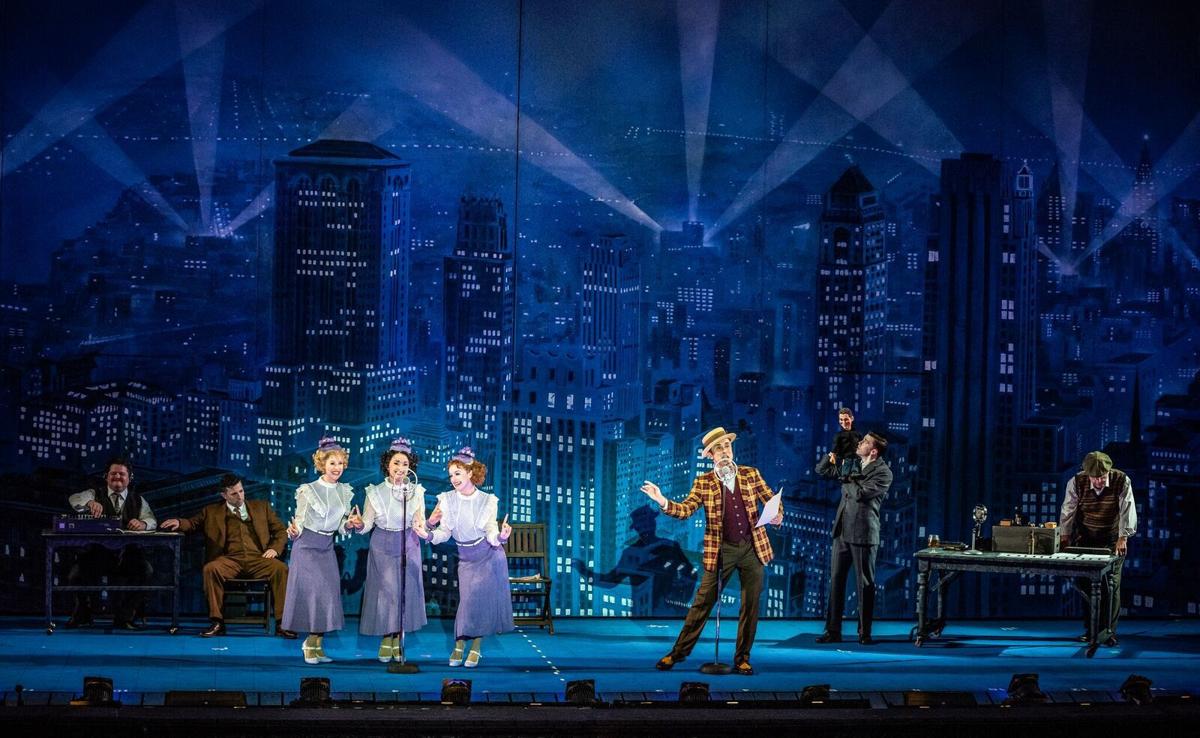 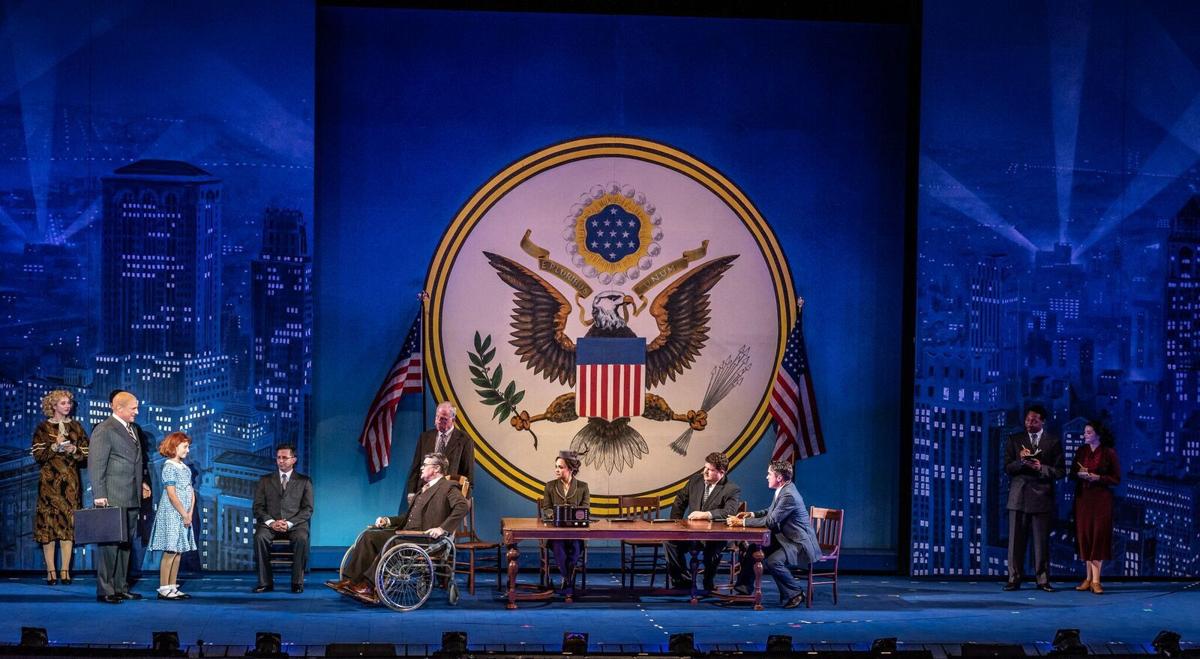 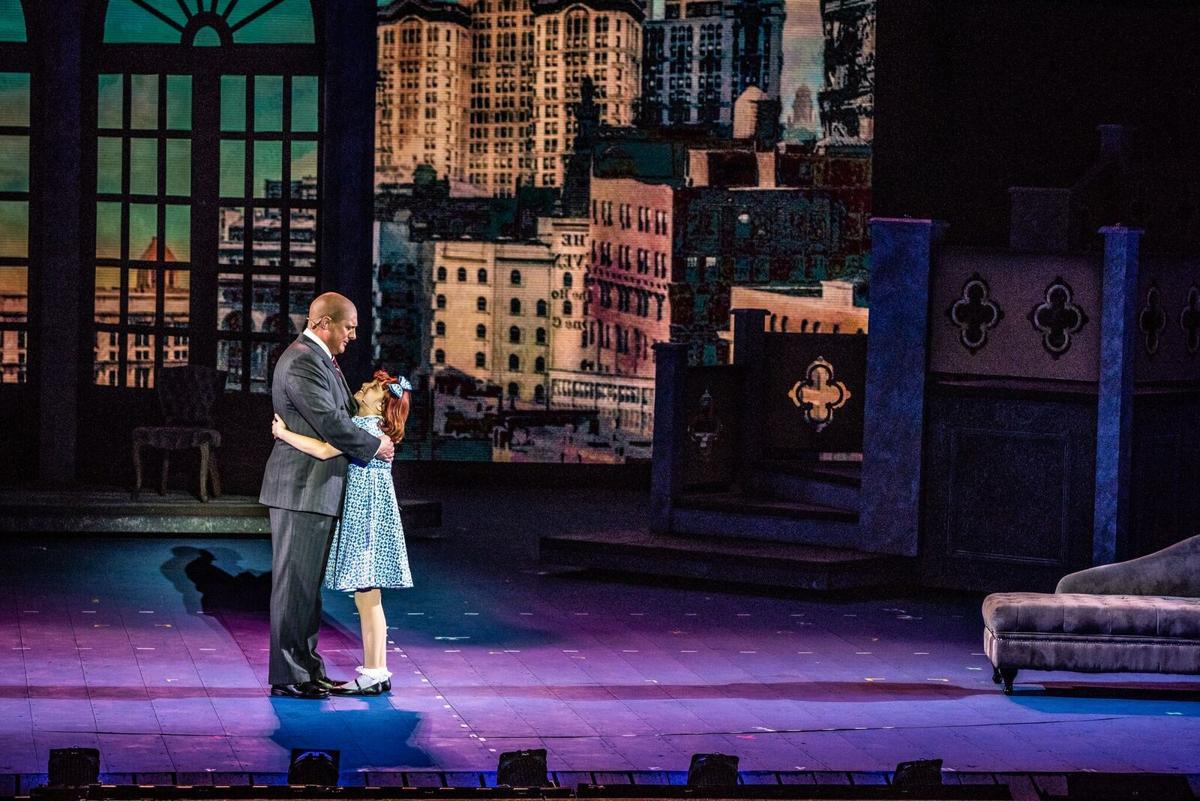 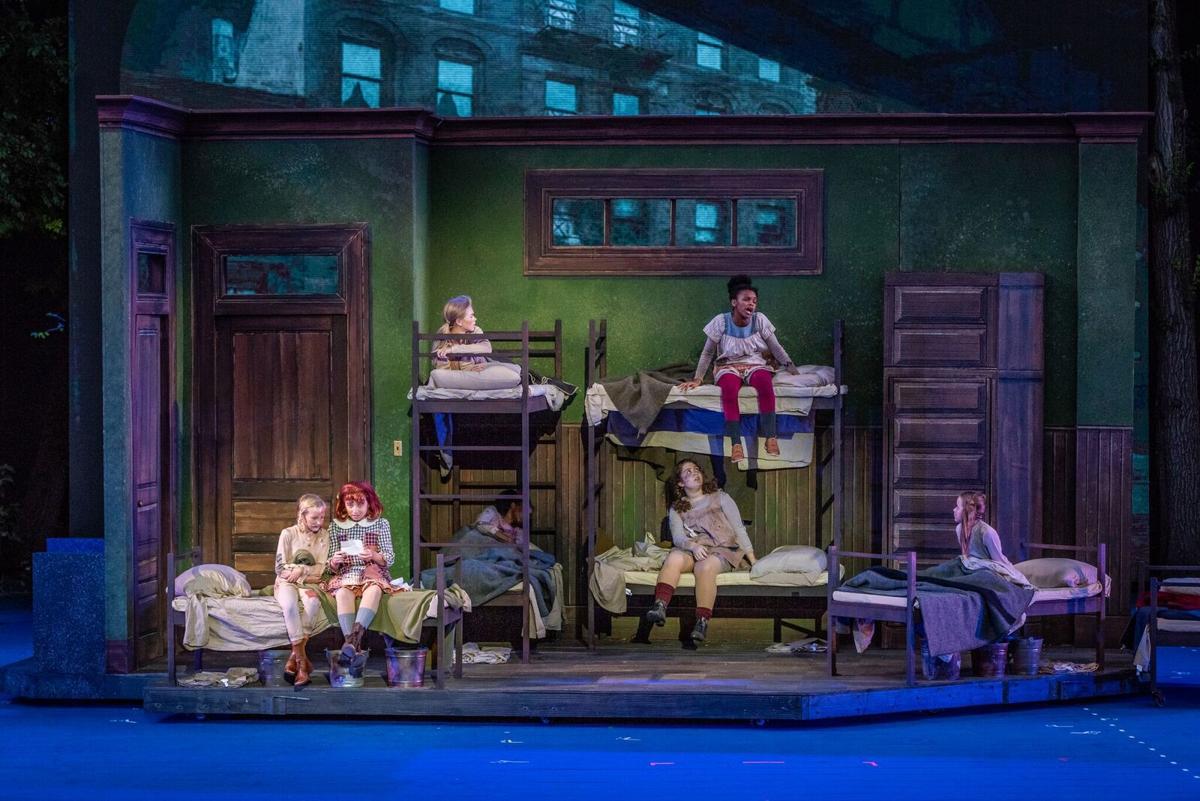 Story: It’s a cold December in 1933 in New York City, especially when you’re an orphan such as 11-year-old Annie. She and other orphans at the Municipal Girls Orphanage are not allowed to smile or have fun. Instead, they’re supposed to work diligently to the satisfaction of the proprietor, Miss Hannigan, who doesn’t really like little girls but is fond of her liquor.

Annie is always plotting her escape to be reunited with the parents who left her on the orphanage doorstep with nothing but a note explaining their dire situation. One day Annie makes good on her exit by stowing away with outgoing laundry. She hits the streets of New York, where she befriends a stray dog she names Sandy and is welcomed into a “Hooverville” of homeless people. Unfortunately, Annie is tracked down by a police officer and returned to the orphanage.

A woman named Grace Farrell visits the establishment on behalf of her boss, billionaire Oliver Warbucks, with instructions to bring home an orphan to spend the holidays in Warbucks’ mansion. Grace takes a liking to Annie over the objections of Miss Hannigan and takes her to Warbucks’ home.

Disappointed that Grace hasn’t brought back a boy, Warbucks nonetheless becomes enamored of the optimistic Annie. So much so that he plans to adopt her until she tells him about her search for her missing parents. Warbucks makes an appearance on the national Bert Healy radio show offering a reward for Annie’s real parents.

The reward money brings forth a dastardly plan by Rooster Hannigan, Miss Hannigan’s criminal brother, and his girlfriend Lily St. Regis: They’ll pose as Annie’s parents and, using inside information from Miss Hannigan about Annie, pull off the con, take the reward and finish off Annie. Will they get away with their planned kidnapping, or will Annie instead receive a brighter ‘Tomorrow’?

Highlights: Annie is back at The Muny for a rousing eighth visit with as much energy, glee and enthusiasm as ever. An opening-night audience of more than 9,000 cheered again for the curly redheaded girl and her infectious cheerfulness, all brought out in a top-flight production triumphantly directed by John Tartaglia.

Other Info: Based on the Depression-era comic strip Little Orphan Annie by Harold Gray, Annie stole the hearts of Broadway audiences when it opened in 1977, running for 2,377 performances before closing nearly six years later. Annie’s first national tour took a hiatus in 1978 for a two-week visit to The Muny.

That’s because, in part, Annie isn’t just a wonderful children’s show. It has an abundance of snappy tunes and invigorating choreography (another Tony Award) to keep adults as well as children entertained. In this production choreographer Jessica Hartman brings renewed energy and verve to the rollicking dances set forth in the highly enjoyable version directed at a brisk and enchanting pace by Tartaglia.

Michael Schweikardt contributes an array of appealing set designs, including a blue homage to New York City’s skyline as well as the grimy locales of the Municipal Girls Orphanage and a Hooverville as well as Daddy Warbucks’ palatial estate.

All of them are carefully illuminated with Nathan W. Scheuer’s colorful lighting design and supported with Rob Denton’s video design and a sound design courtesy of John Shivers & David Patridge.

The orphans, luminaries and scofflaws all are suitably attired in Leon Dobkowski’s costumes, highlighted by the tacky threads adorning Miss Hannigan and Lily St. Regis, with Kelley Jordan accentuating the looks with her well-appointed wigs.

Colin Welford’s musical direction of The Muny orchestra further enhances this rendition, backing up The Muny ensemble, The Muny youth ensemble and the St. Louis Strutters on show-stopping numbers such as the irrepressible Hard Knock Life, featuring a cavalcade of girls toiling in Miss Hannigan’s sweatshop, and the big, brassy N.Y.C. number on the town.

Peyton Ella takes to the stage like a seasoned pro in the affable title role, displaying a knack for comedy as well as an appealing voice. Jennifer Simard has the best time bringing out the low-level villainy of grumpy Miss Hannigan, especially when she’s lamenting her lack of adult company in the presence of so many Little Girls.

Britney Coleman offers one of the best voices in the show as Warbucks’ faithful secretary, Grace Farrell, while Christopher Sieber shows his own flair for comedy as the flustered Oliver Warbucks, who finds himself taken with the charm of his orphaned holiday guest.

Jon Rua and Holly Ann Butler ratchet up the humor with their delightfully dastardly portrayals of slick con man Rooster and his gold-digging girlfriend Lily St. Regis, especially when they join Simard for a lusty rendition of Easy Street, another of the show’s signature tunes.

The large ensemble includes solid turns by Muny favorites Whit Reichert as Warbucks’ butler Drake, Rich Pisarkiewicz as the apple-selling head of Hooverville and Patrick Blindauer as laundry man Bundles. There’s also a classy tribute by The Muny to its most previous incarnation of Annie, Abigail Isom, who charms the audience as the Star-to-Be in the rousing N.Y.C. number.

Don’t be afraid to admit you love Annie. You’re in good company, especially for a production as likable as this one.