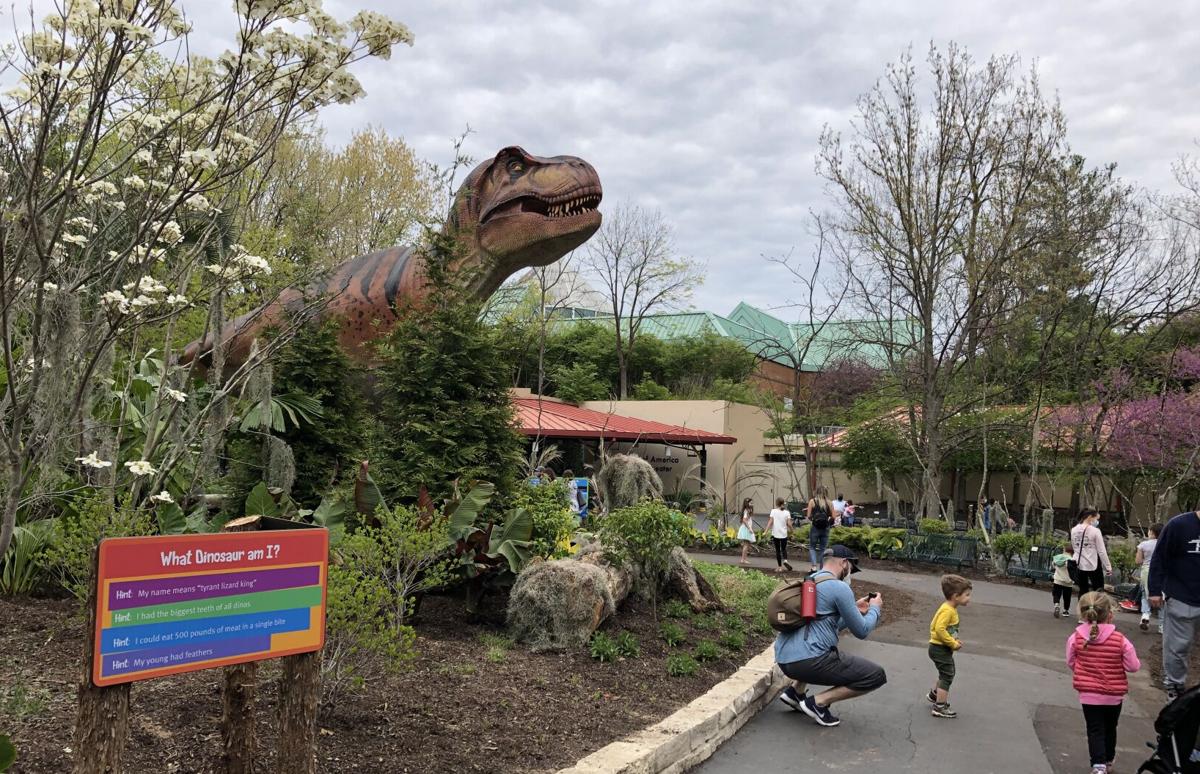 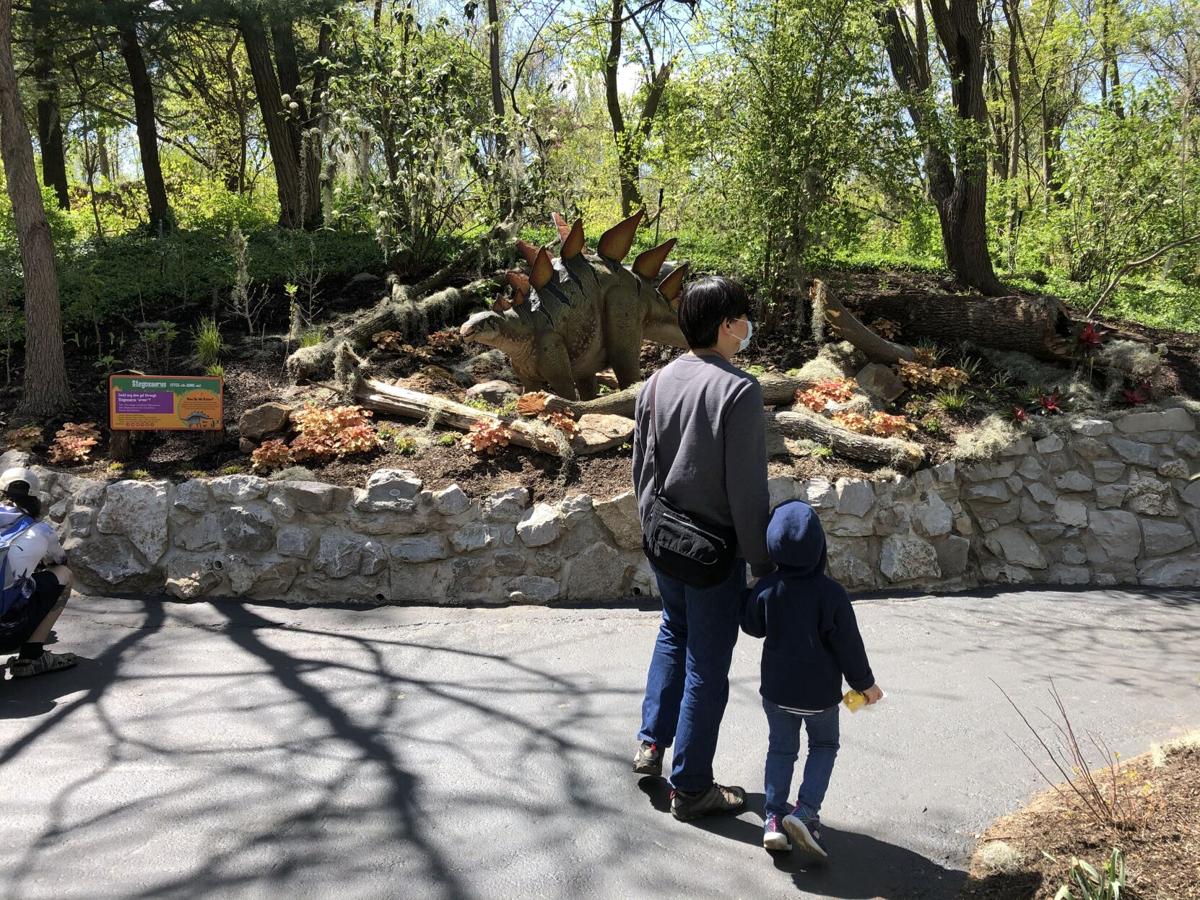 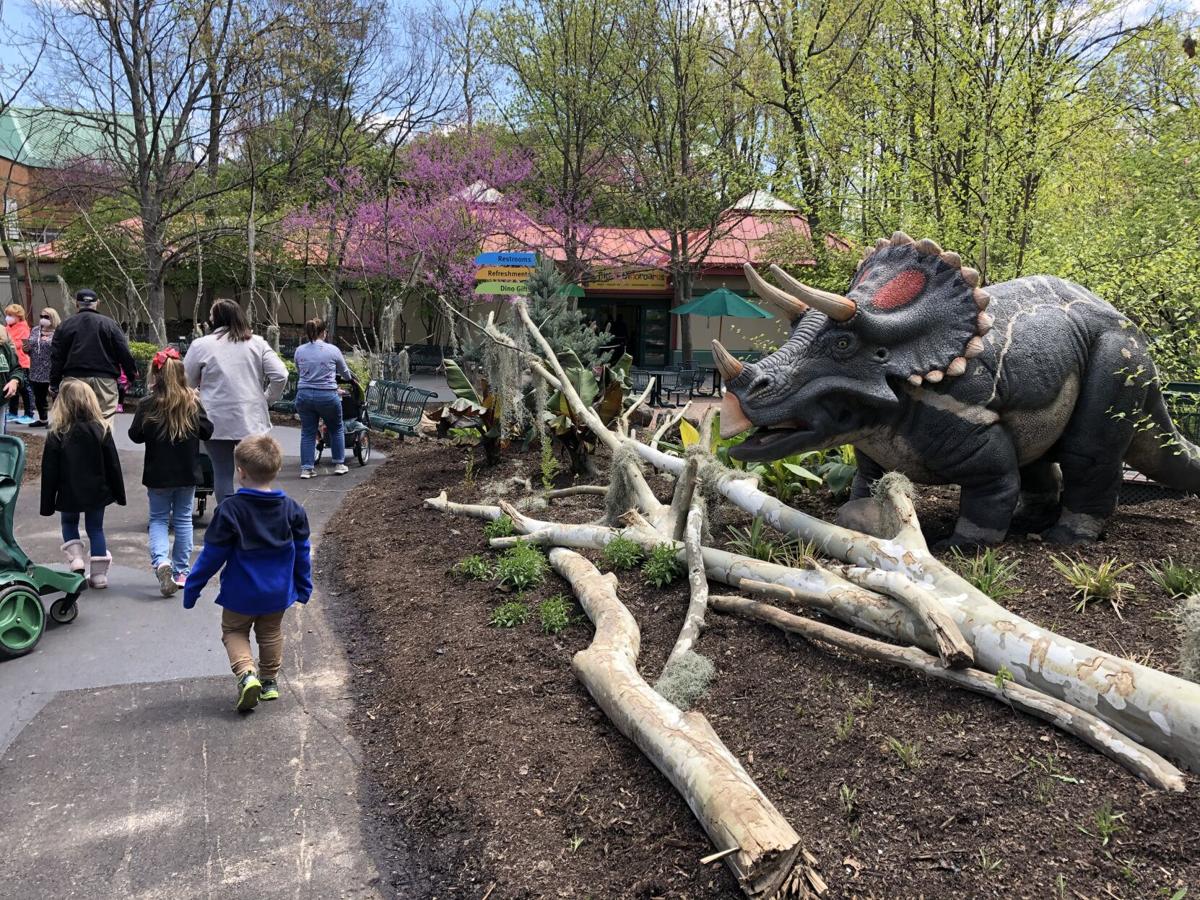 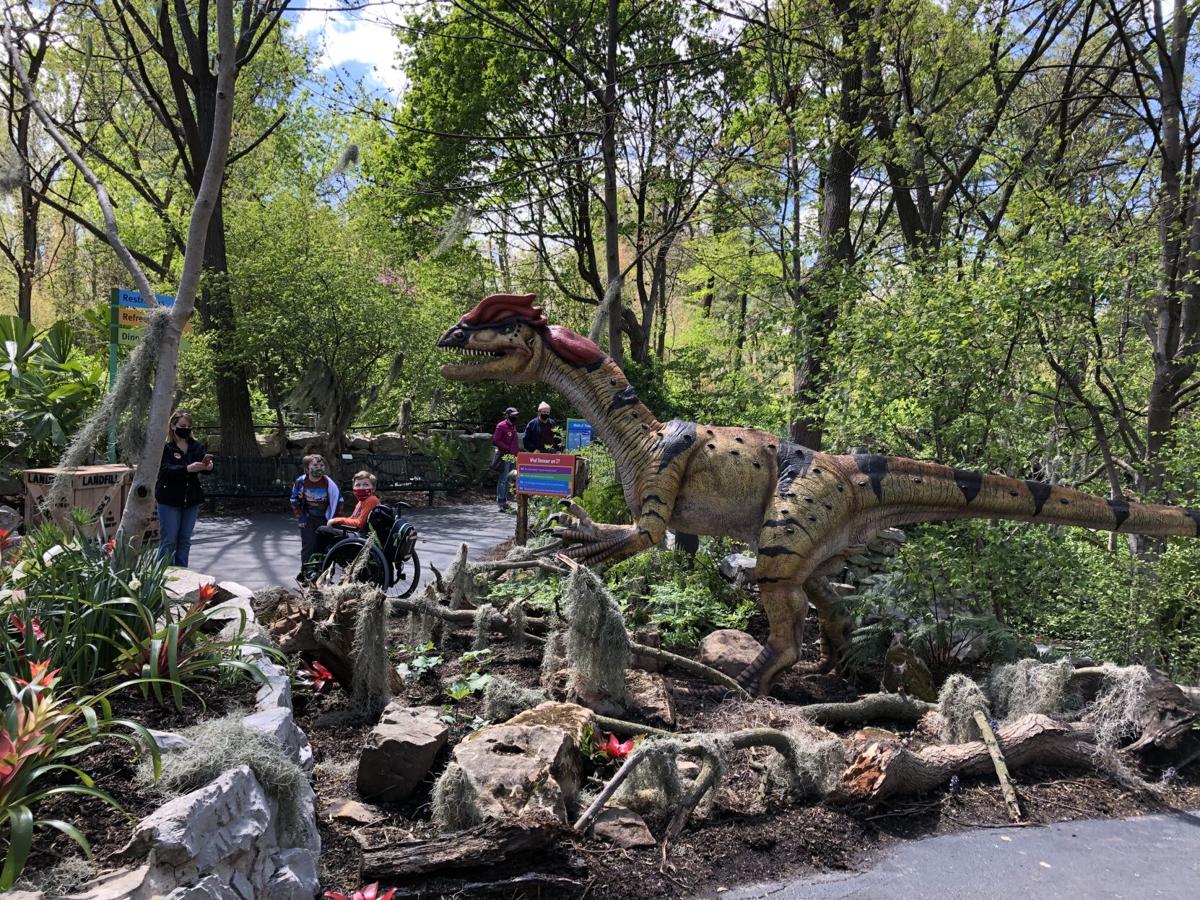 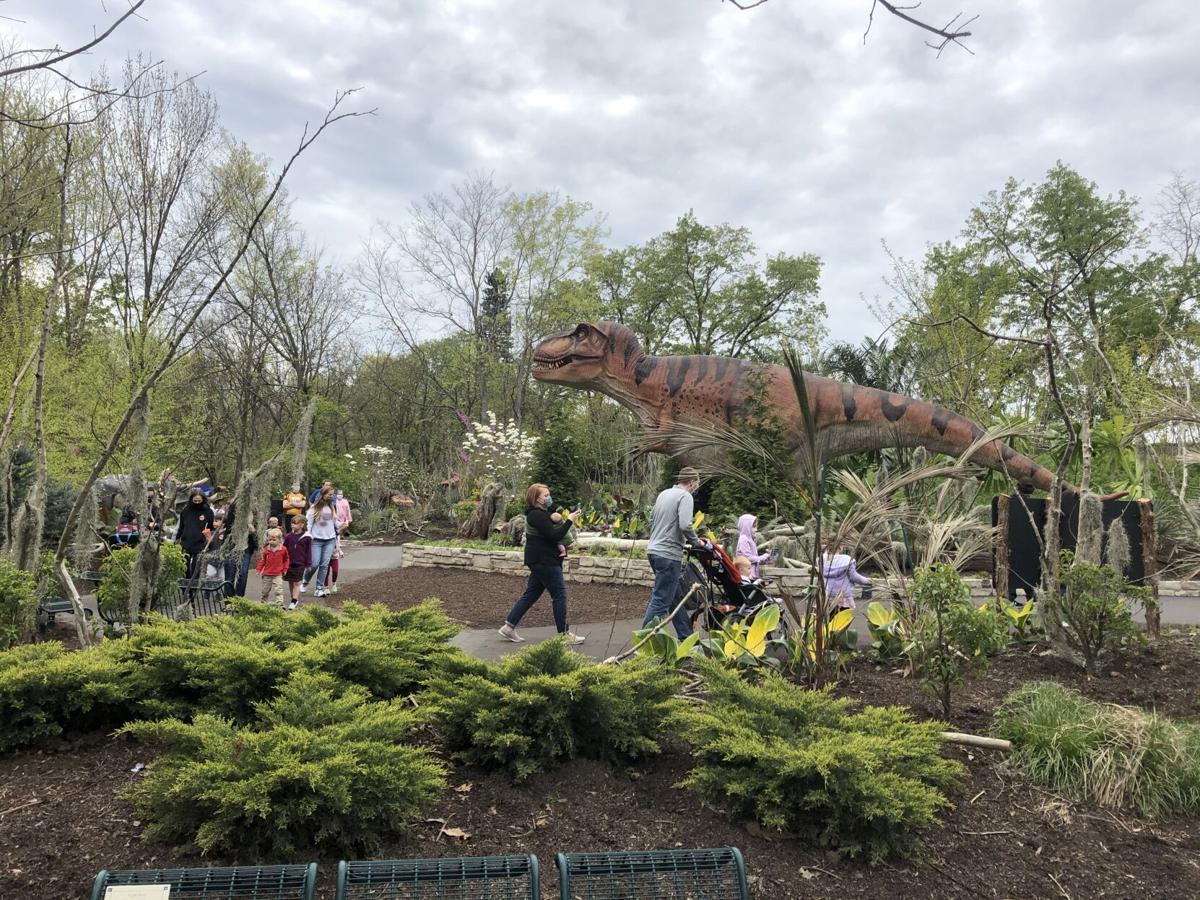 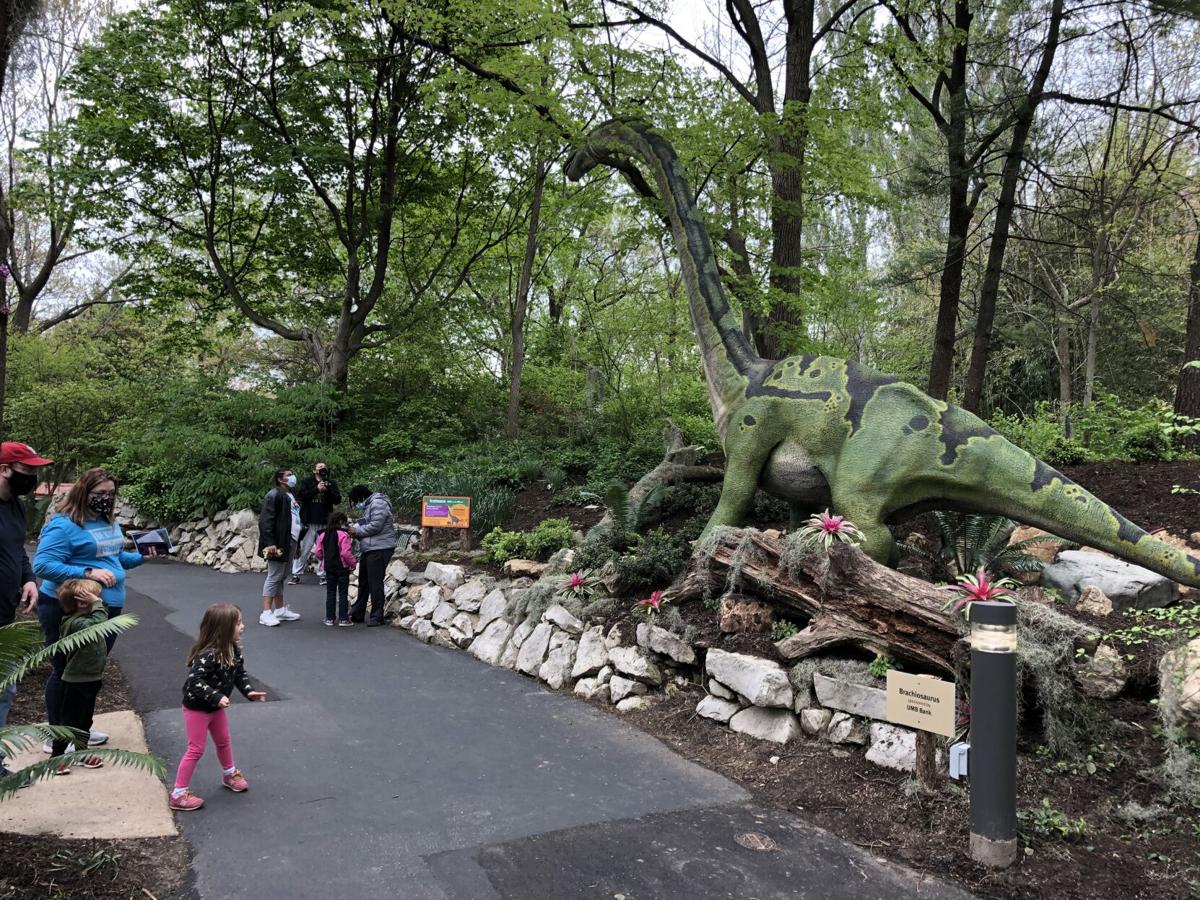 By Drew Gieseke | Photos courtesy of the Saint Louis Zoo

An engaging new exhibit at the Saint Louis Zoo takes visitors back in time more than 83 million years, not only to see dinosaurs in action and learn about how they lived but also to better understand how these insights impact animals and the environment today.

Dubbed “Emerson Dinoraurus,” the recently debuted exhibit features 16 different groupings of animatronic and stationary dinosaurs that move, munch and, yes, roar to the delight of visitors young and old. Located on-site at the zoo, the experience includes prehistoric creatures like a life-size triceratops, an 18-foot-tall brachiosaurus, a 12-foot-tall Tyrannosaurus rex and many more – each of which helps tell the story of life and its precarity on Earth.

But visitors shouldn’t expect the experience to be populated with just extinct critters.

“We were able to incorporate some of the existing live animals into the experience,” says Michael Macek, the zoo’s director. “We chose animals and fabricated most of the designs ourselves to talk about things like extinction, conservation and climate change.”

The species that populate the area were each carefully selected to help illustrate that similar animals lived during the various periods when dinosaurs roamed the earth. Some of the live creatures that visitors can see at the exhibit include North American river otters, Tasmanian devils, fish, sea stars, urchins and more – not to mention modern bird species like the domesticated guinea fowl, which are expected to arrive later this summer to roam the exhibit.

This connection between then and now presents plenty of learning opportunities for children. Zoo interpreters can be found throughout the site to talk about evolution, extinction and climate change – undeniably tough subjects that can be more than a little challenging for younger guests. With this in mind, lessons are applied to the animals that live today to bridge the divide between the past and present – and, hopefully, to help shape a more sustainable future.

Macek expects “Emerson Dinoraurus” to run as a seasonal experience for the next two to three years and says that zoo guests can expect changes from one year to the next to keep the material fresh. Further, the attraction, which was designed by the team at the zoo, forms just part of a more transformational project to reimagine and redevelop the 3.5-acre location into a new, permanent family and children’s area.

“We are actively designing,” Macek says. “We’re really probably in the first quartile of reimagining it. We do have the capacity to design, brainstorm, looking at best practices and developing empathy in children for animals. If we stick to our current design schedule, we should have some good concepts by October.”

The ultimate goal between the exhibit and the future of the area is clear: Whether the animals on display are long-since extinct or endangered currently, the zoo wants to continue making connections between them and visiting families.

“Learning about dinosaurs is kind of like CSI [crime scene investigation], using really old evidence,” says Macek in a news release issued by the zoo. “Paleontologists ask questions about why certain dinosaurs moved to different places and why their food supplies or habitats were threatened. And those are exactly the kind of questions zoo conservationists ask today in trying to save animals from extinction.”

The temporary exhibit will run through Oct. 31, 2021. Admission costs $5.95 per person for ages 2 and up, with children under 2 admitted free, and can be purchased at the entrance to the exhibit.