Highlights: Director Robert Ashton coaxes agreeable performances from his trio of stalwart actors in the debut presentation of Albion Theatre, a shrewd choice of the comedy “Heroes.”

Story: In World War I, they were intrepid soldiers on the European front lines, triumphantly defending their country from hostile invaders. Now, in 1959, these three stalwart heroes lead docile lives at the French retirement home where they reside.

Philippe is the newest of the three, having arrived six months ago. Although the home is filled with folks of all stripes, Philippe spends most of his time with newfound friends Gustave and Henri.

They share a common background, but they are quite different. Philippe has his eyes on the ladies most times, at least when he isn’t suddenly dropping off with narcolepsy. He accepts that unfortunate malady as part of his condition, though, and amiably moves forward as best he can.

Gustave has been at the retirement home for a decade and seems to be its resident philosopher. He can be cantankerous and disagreeable, but will back off if his attitude is getting too negative for his colleagues. The third member of the group is Henri, who has lived at the home for a quarter of a century and whose dapper appearance indicates that he is the most proper of gentlemen at all times.

One day, the veterans decide to take on a new conquest. They will have a picnic beyond the confines of the home, up in the hills where the willows are blown by the winds. After all, it’s within sight of the patio where they regularly congregate. Philippe is determined to get some exercise and get in good shape, since another new member shares his birthday. And as Philippe observes, if two residents share the same birthday, the nurse in charge will make sure that one of them dies. That’s just the way she is.

Of course, it takes considerable persuasion to convince the obstinate Gustave and taciturn Henri to venture into the unknown. Philippe is up to the task, however, with his undampened optimism.

Will Philippe follow through on his adventurous plan? Will Gustave avoid his negativity, and opt instead to join his comrades on their trek into the woods? Will Henri step away from his regular, rigid routine for a little spark of spontaneity? After all, at one time all three of them were heroes.

Other Info: Ashton, who also serves as the troupe’s artistic director, took its name from the ancient Greek word for “Britain,” an archaic usage according to Wikipedia. Ashton aims to present works from British authors with his new company, although he admits that ironically the initial effort is by French writer Gerald Sibleyras, with a translation and adaptation by Czech-born British playwright Tom Stoppard. Rue Britannia.

The one-act work is short on action and long on exposition, but it conveys charm and a sweet core, especially when told so winningly by Isaiah Di Lorenzo, Will Shaw and David Wassilak. They portray Philippe, Gustave and Henri, respectively, and each actor owns his character with a thoughtful and well-embodied portrayal.

Di Lorenzo relies on his physical agility to handle the numerous pratfalls which befall Philippe, in light of his periodic narcolepsy. He is an ingratiating “fall guy,” as well as an impish rogue not above handling an attractive nurse inappropriately, even at his age.

Wassilak maintains the buttoned-down personality of Henri, even when the long-time home resident becomes exasperated with the quirks and eccentricities of his colleagues. As Gustave, Shaw carefully considers his words before he invariably points out the fallacies in the opinions offered by Henri, Philippe or both.

The three live in a one-step-up, two-steps-back world, but it’s a world which offers them comfort and security. For added ballast, there’s the omnipresent stone statue of a dog which joins them for their daily interludes on the porch, an object which Philippe says watches him and moves ever so gradually. Naturally, it is decided that the docile canine must accompany them on their journey to the woods, even at 200 pounds.

Ashton’s direction is steady and focused, as Sibleyras and Stoppard doubtless intended. There are nice contributions by Brad Slavik with the simple set design: a marble floor, a diminutive, columned fence in the background and that sturdy dog. Nathan Schroeder’s lighting design complements the leisurely proceedings, and the cast members (apparently) dress themselves in attire befitting their characters.

“Heroes” is 90 minutes of light, whimsical fare, which nevertheless is filled with intelligent ruminations about the human condition and our never-ending quest to reach for something better, even a picnic in the woods, if only to savor the accomplishment. 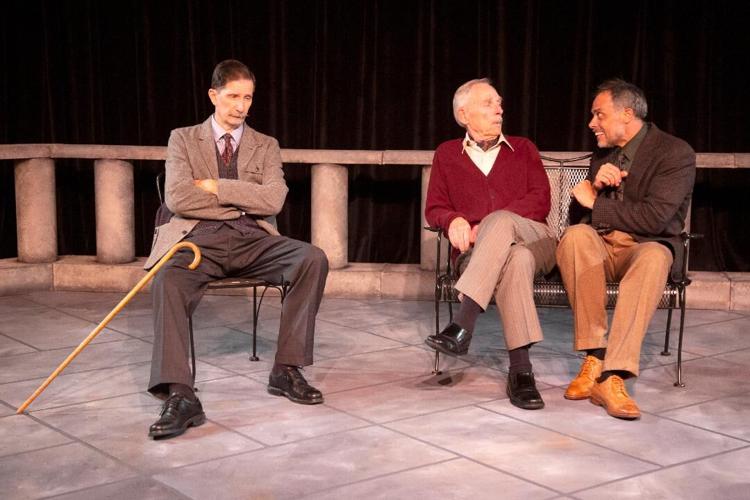 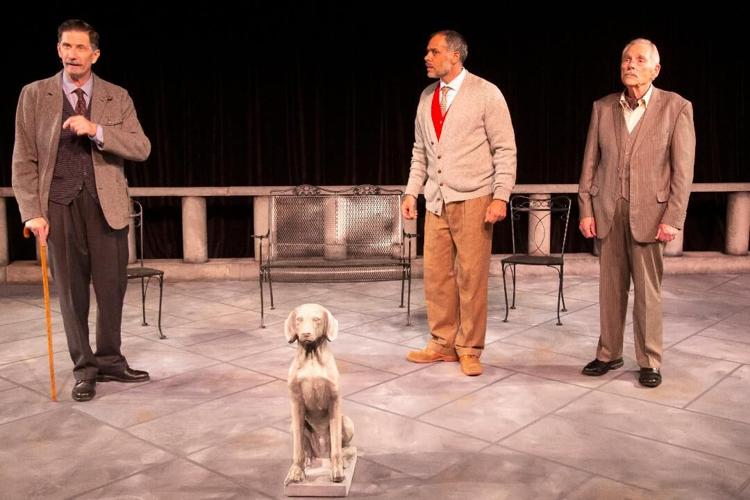 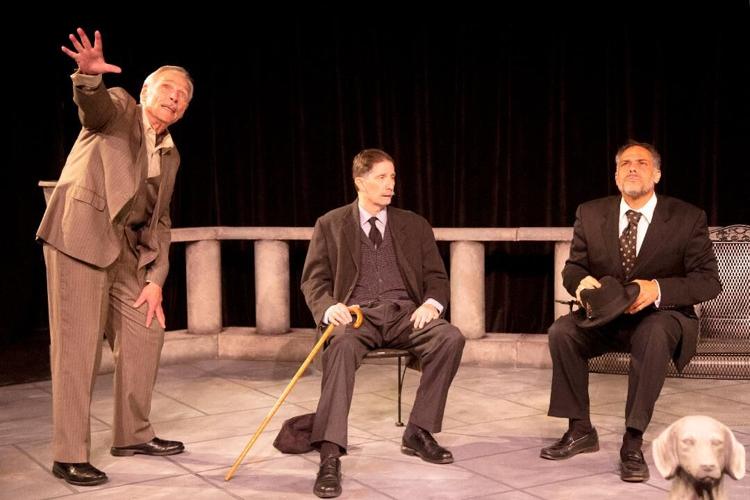 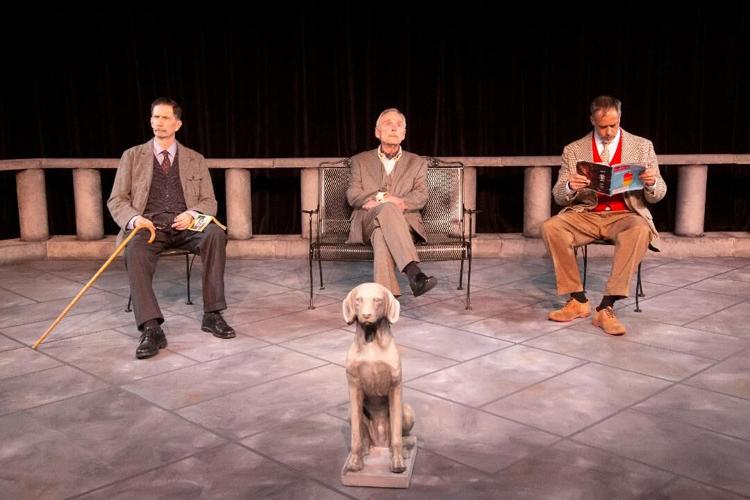