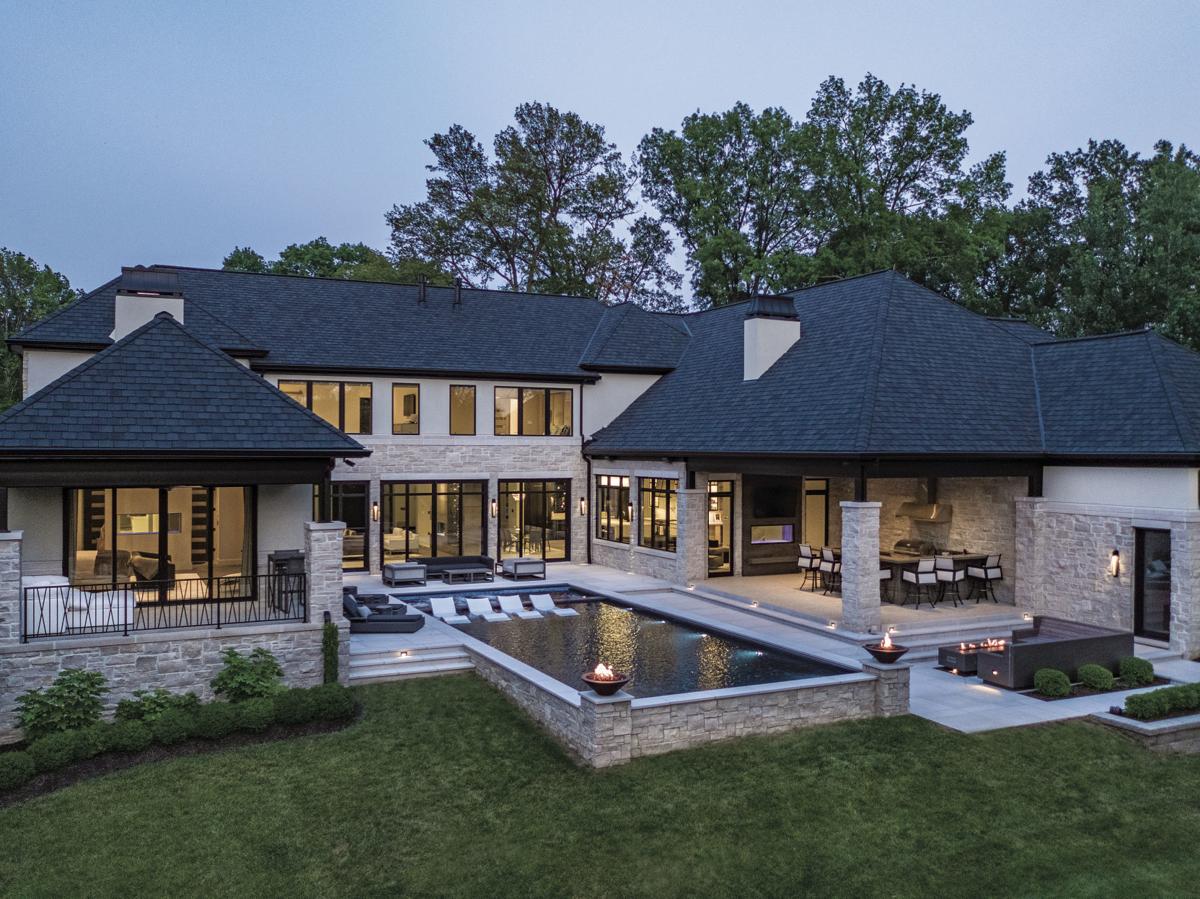 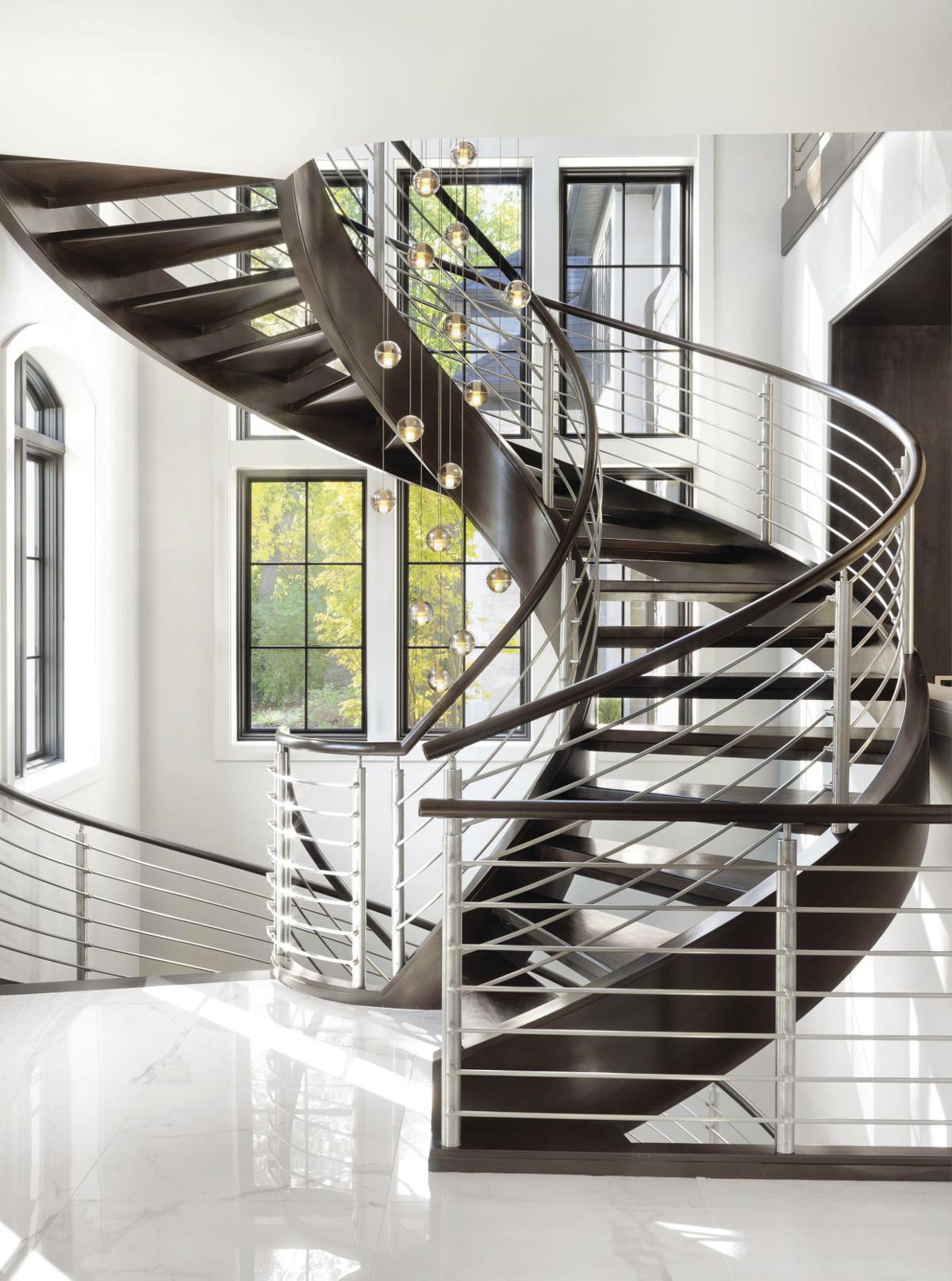 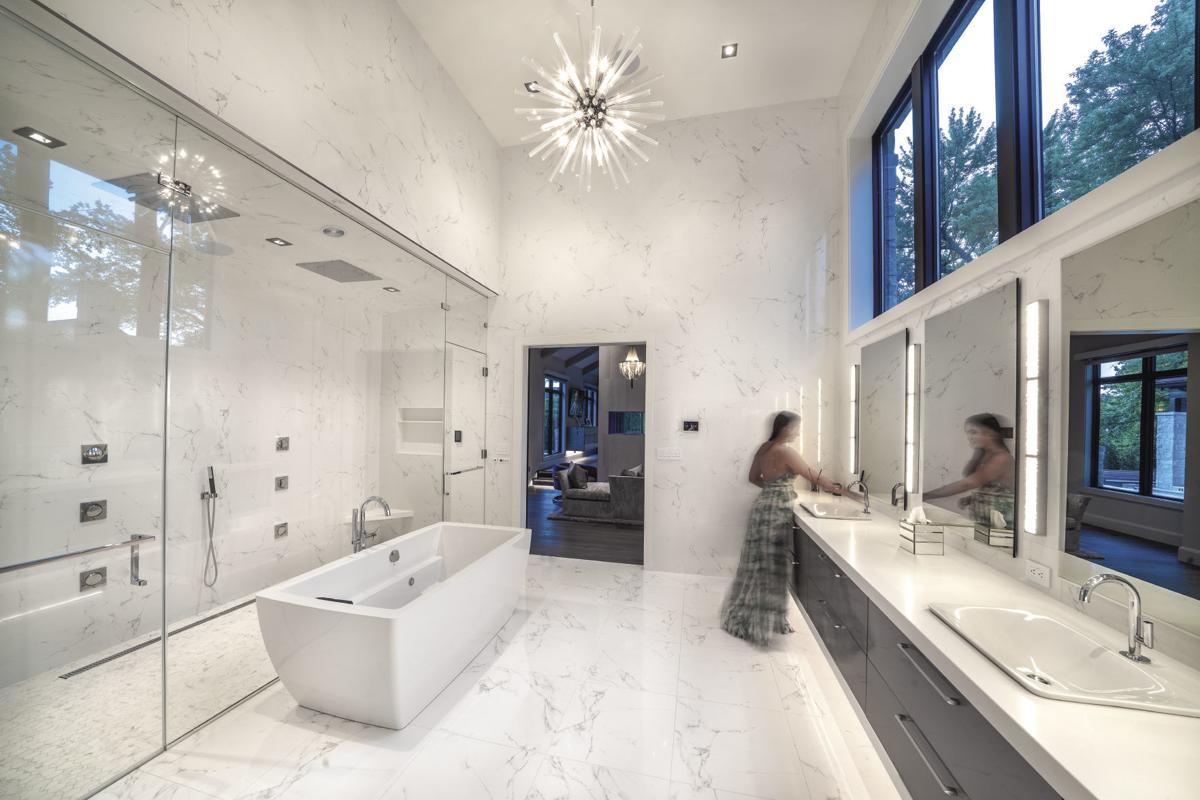 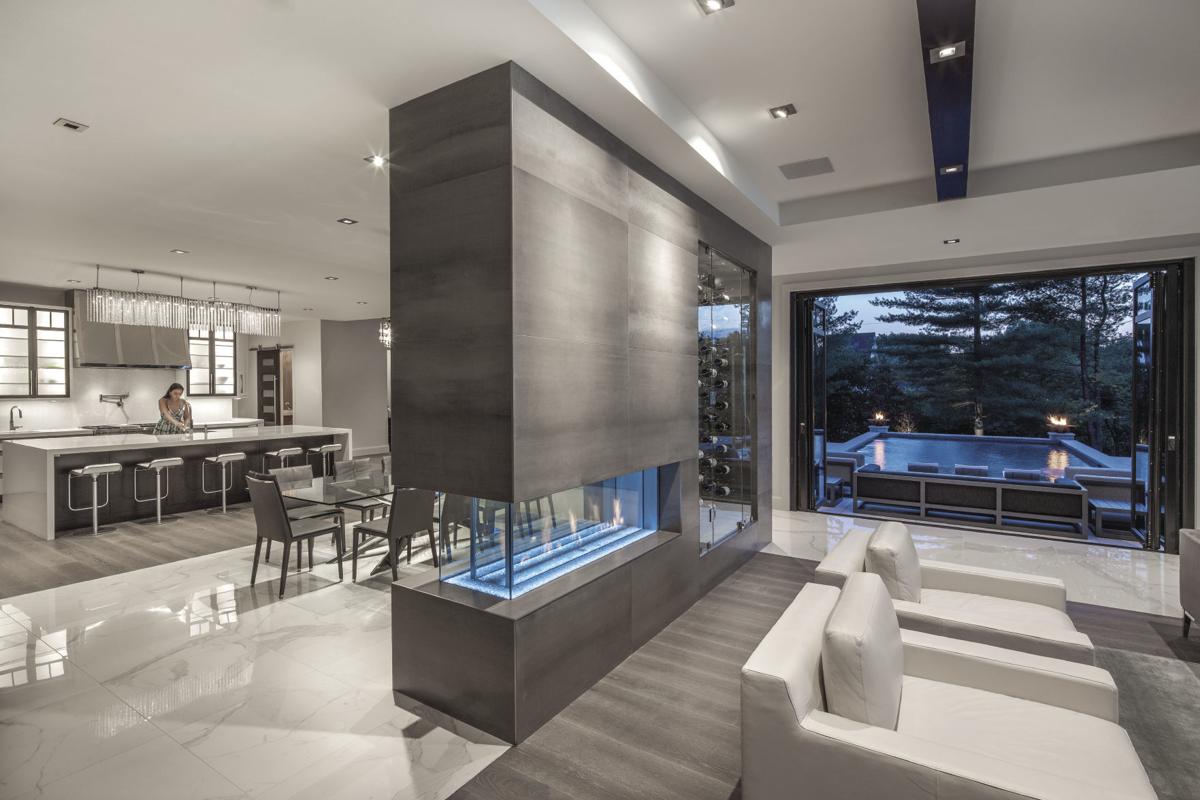 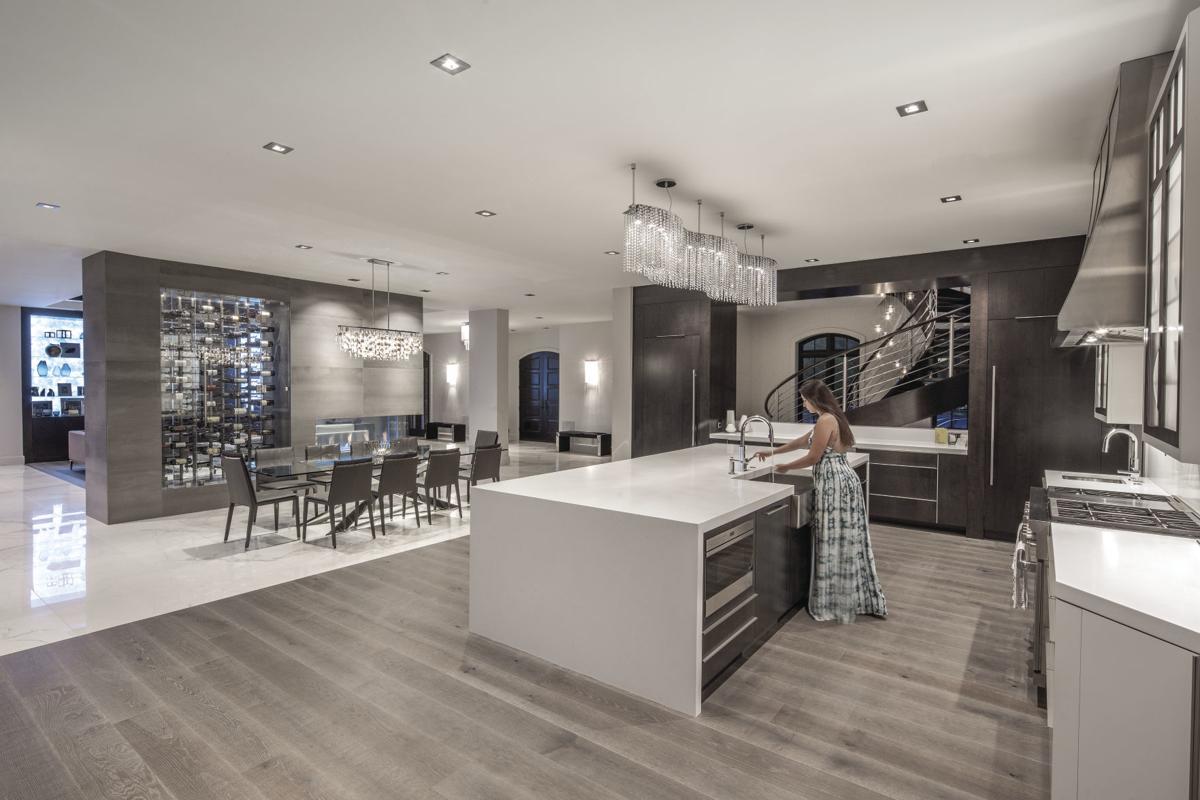 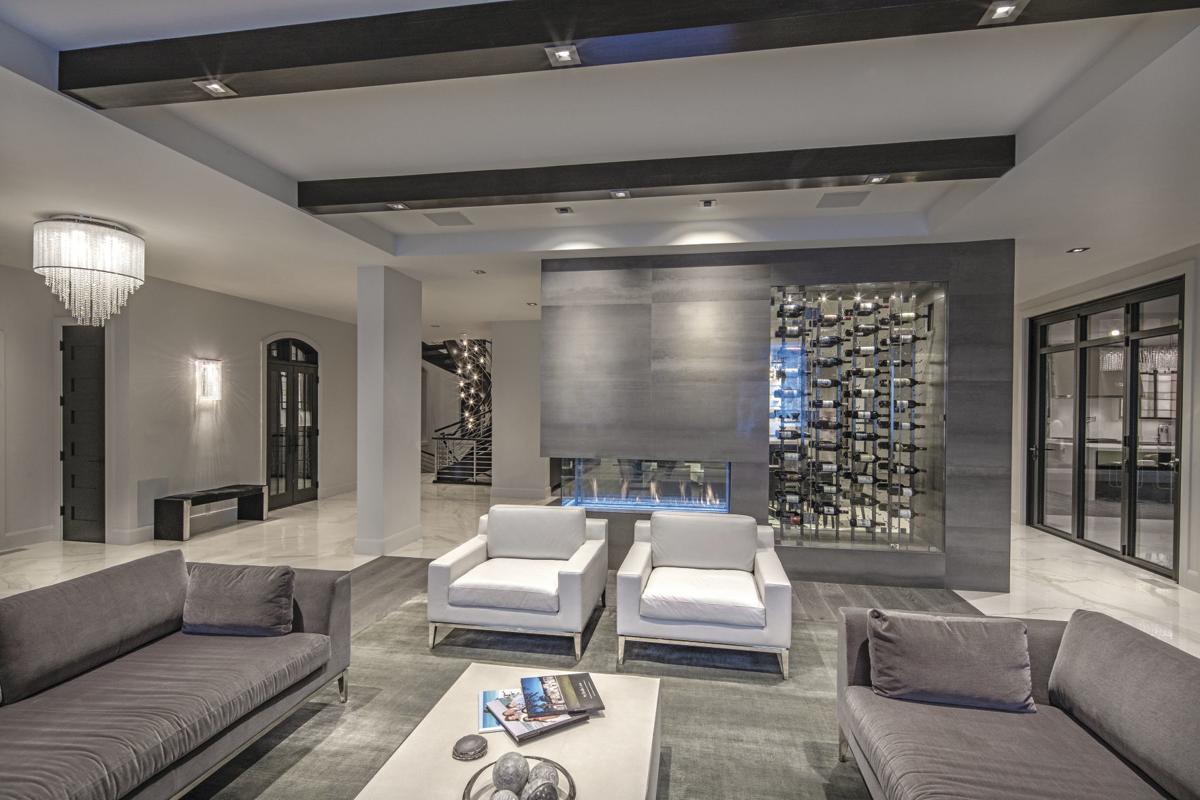 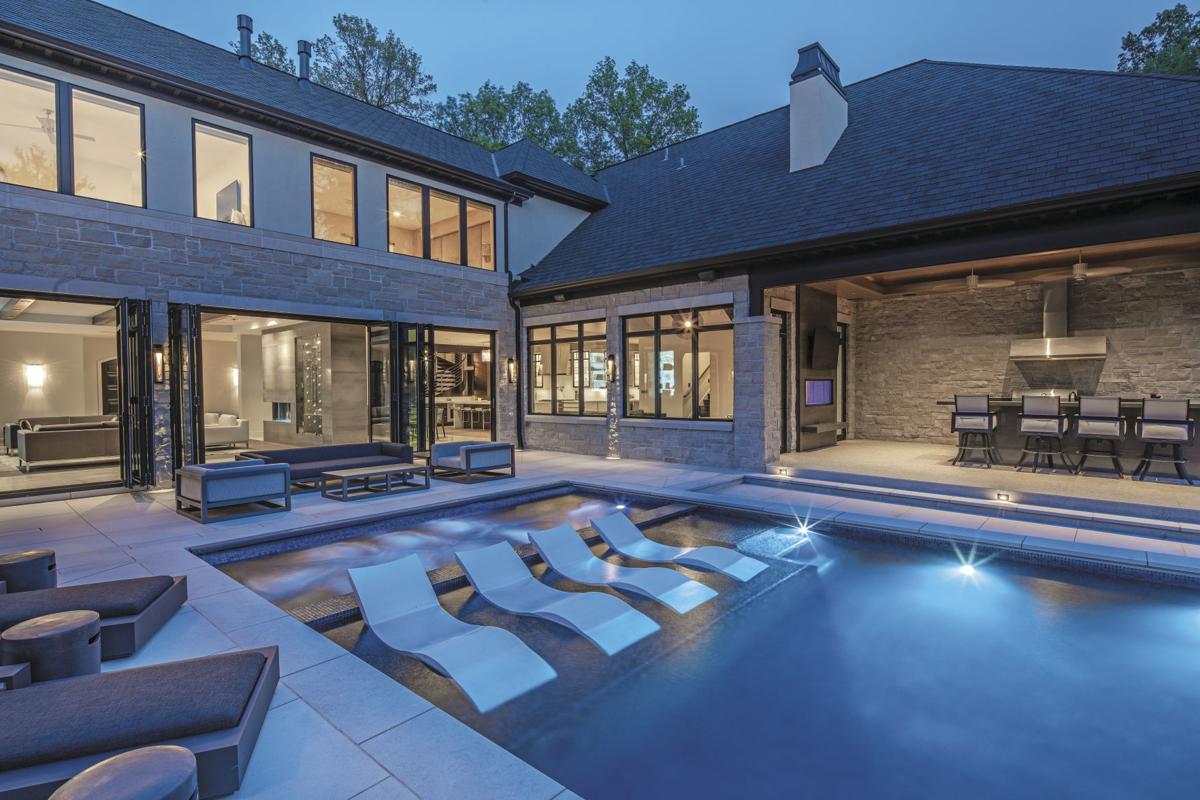 They say you can’t have it all. “They” have clearly never been to The Frontenac House designed by Mitchell Wall Architecture and Design.

Classic yet modern, stately yet sleek, the exterior of the two-story, 7,400-square-foot home in Frontenac is magnificent and elegant, with custom stonework creating a classic yet unassuming façade. But stepping inside, one is surprised to find another set of design criteria with polished, contemporary lines.

“The [owners] wanted a classical-looking front to the house with stone and a lot of glass, and the inside to be modern and sleek,” says Greg Garrett, project architect for Mitchell Wall Architecture and Design.

The physical lot proved a challenge, which Garrett says they worked to their advantage. The biggest challenge, Garrett says, was nailing the overall ambiance and design aesthetic of the house and getting it to fit on the lot.

“We went through many different design iterations to meet our clients’ demands,” he says. “Combining all those aspects, classical and modern, into a project that works was a challenge, and we pulled it off.”

Reviewing examples of classical architecture, the clients were drawn to stone that incorporated great detail, as well as dark windows with dark, black cladding, which makes them look as though they blended into the wall. This helped the couple settle on an all-stone exterior.

“Throwing all of those pieces into a blender sifted out what we ended up with,” Garrett says.

The goals for the interior were different. The couple travel often and had spent a lot of time in Asia and Europe, so they knew they wanted a design that reflected their contemporary sense of style, says Tamsin Mascetti, owner and interior designer at Tamsin Design Group, who worked on the project for more than two years.

“We created a contemporary, clean look while keeping the overall feel warm and friendly,” she says.

In a house of contradictions, classic yet modern, elegant yet bold, it’s no surprise that the central point of the main floor is a contradiction in and of itself. Right next to the fireplace is a wine fridge, where several dozen bottles of wine are on display. The centerpiece is visible from five rooms – the living room, dining room, kitchen, hearth room and entry hall – making it a stunning focal point, as well as a partial visual divider.

The couple wanted a completely open floor plan for ease of entertaining, Mascetti says. She worked with them to create an open concept design that used mixed materials, such as large-format marble-look tiles and wide plank oak, to visually divide the space.

The kitchen is sleek and updated with the latest amenities and can also seat both friends and family comfortably at the massive waterfall edge island. The countertops and backsplash are Caesarstone quartz, while the cabinets come from the metro area’s own Beck/Allen Cabinetry. A Sub-Zero 36-inch column refrigerator and freezer flank the opening to the dramatic spiral staircase, which extends between the second story and the basement.

“We chose a sophisticated color palette of rich dark brown and bright white throughout the home, which was echoed in the kitchen,” Mascetti says. “The two-tone custom-designed upper cabinets were a combination of the white lacquer base cabinets and the wall of dark-stained wood built-in cabinets.”

But entertaining isn’t limited to the indoors. The house was built with the backyard in mind.

“They wanted the backyard, where they spend a lot of time with their kids, to be the ‘party zone,’ with a swimming pool and fire pit,” Garrett says.

Because of the lot’s narrowness, the house was built in a U-shape, with the pool in the center of the backyard. The space also features a television and gathering area for the family.

“The doors on the back of the family room are a NanaWall system so they slide fully open to bring the outdoors in,” Garrett says.

The house took almost three years to finish. But the result is a residence that’s both modern and elegant, a place that feels like home from the inside out.